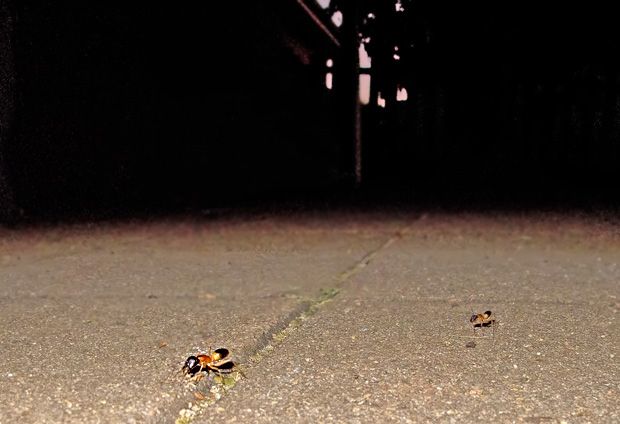 The mysterious twilight procession begins. Up the driveway, across some steps and along our paved area with relentless purpose. Photos taken by Rob and Harry Ashdown on Canon Powershot G10 and G12.

Every summer, about twilight, when the throaty rumble of newly-emerged Bladder Cicadas fills our ears, a strange procession happens outside our back door. Large ants wander up from the driveway, always heading in the same direction — across the back paved area in the direction of our neighbours’ house. 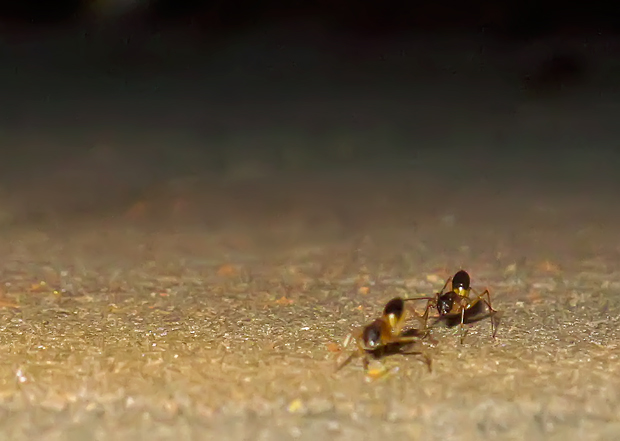 Banded Sugar Ants on the go. Sugar Ants come in many shapes and sizes, and are named after their habit of collecting sugary plant secretions, although most species are also scavengers and predators. Many Brisbane species are nocturnal.

We’ve come to call them Moon Ants, for some reason, probably because they come out only at night, and we’ve watched them in the moonlight (as you do). We quizzed Susan about them when she visited a few years back. Susan’s a guru of all things entomological, which she should be, as she’s an entomologist at the Queensland Museum in Brisbane. She filled us in. These are Banded Sugar Ants (Camponotis consobrinus), members of the largest genus of ants in the world, a group that comprises thousands of species, of which at least 20 are found in the Brisbane area. 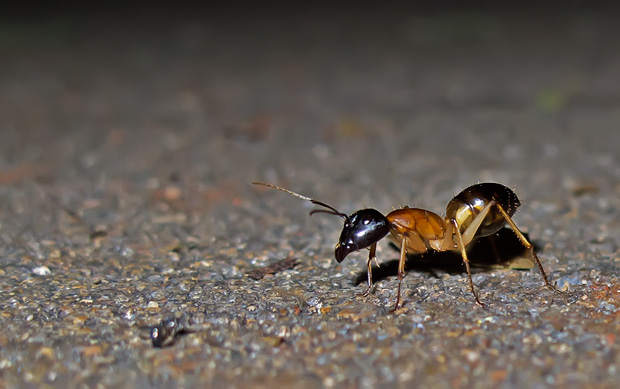 Sugar Ants differ from other ants in several ways, according to the Queensland Museum’s wonderful guide to ants (seriously, this is a fabulous book). Most have no metapleural gland (you knew that I’m sure), and they lack its associated opening above the base of the hind leg (you probably knew that too). There’s more. They have a single segmented waist and the mesosoma and petiole lack spines (I knew that … well, I do now). Workers don’t sting, but can spray formic acid into a bitten area. Ouch!

Although big and fierce looking, Banded Sugar Ants don’t sting, but they can bite, although we’ve yet to be savaged by any. They fare rather worse in our encounters, often getting flattened by foot traffic out the back at night. 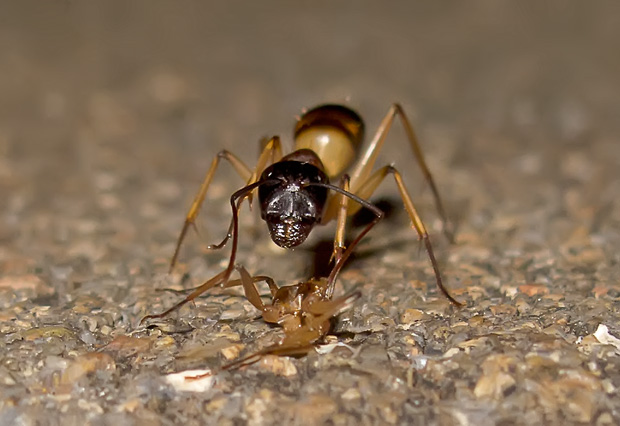 A Banded Sugar Ant pauses to inspect the body of an unfortunate colleague, tragically flattened by the giant feet of blundering humans.

Last year we went on a mission to track down their nest site, which we found under some old railway sleepers alongside the driveway. We didn’t disturb them, and although most people have a fair amount of disdain, or even hostility, for ants, I reckon they are terrific. We always like watching their purposeful march past our back stairs. Another piece in the jigsaw of our strangely diverse suburban backyard.