An article written for the Spring/Summer 2013 edition of Wildlife Queensland news.

A nature photographer could not ask for a more perfect spot — it was one of those rare occasions when everything is just right. I was sitting in a borrowed kayak somewhere in the middle of Lake Nuga Nuga, the largest natural body of water in Queensland’s central highlands. 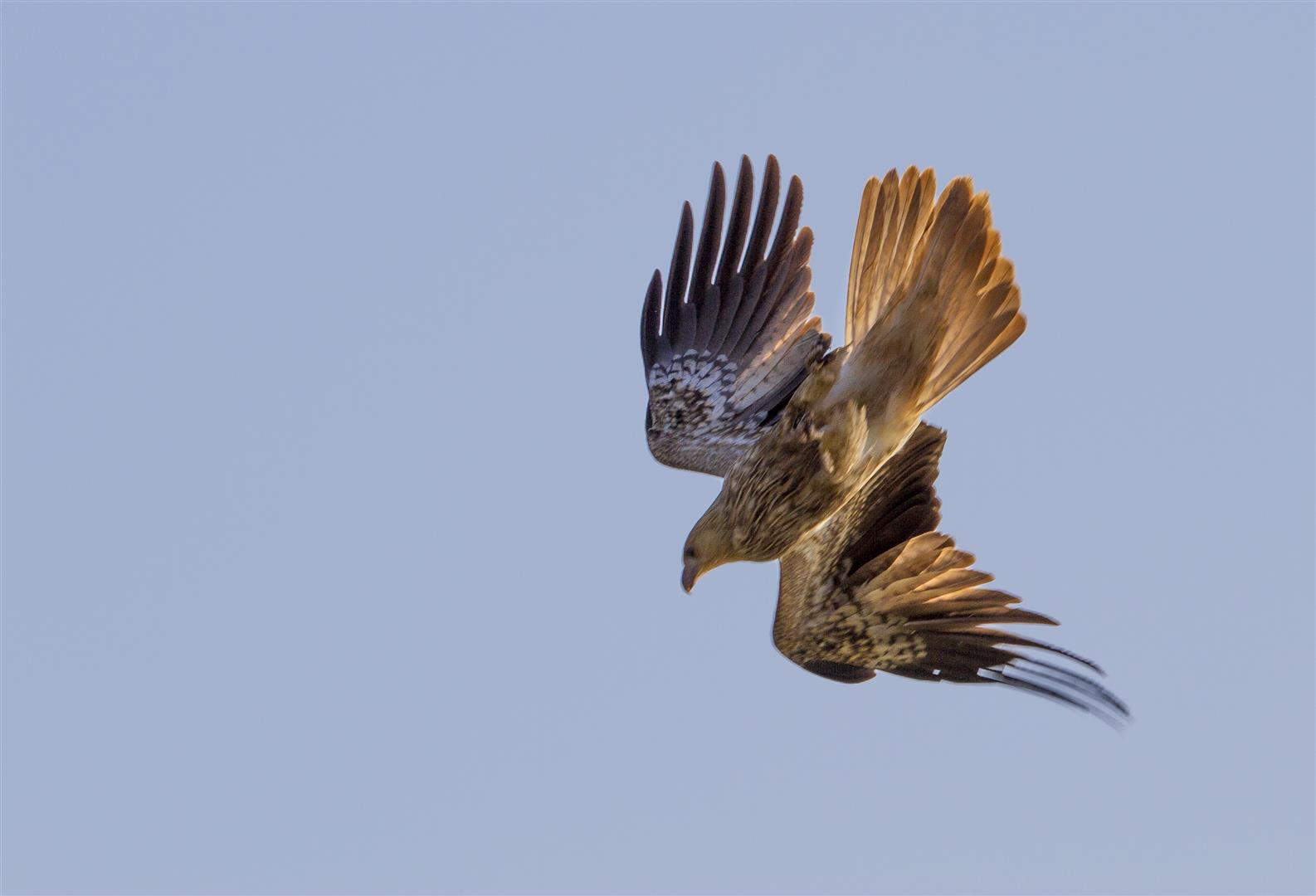 A Whistling Kite wheels above the waters of Lake Nuga Nuga. All images R. Ashdown.

I’d paddled out with camera in the early morning, moving through a surreal field of native Giant Water Lilies, their huge pink flowers still closed. I thought I’d just keep paddling about furiously until I found things to photograph, typically impatient to discover something of interest.

The lake, however, was about to remind me once more of the need to just sit, wait, shut-up and look. I eventually stopped paddling and sat quietly, taking it all in and reminding myself to breathe and enjoy the moment. The sounds of morning on the lake rolled over me as the day’s dramas unfolded with the opening of the giant lily flowers. 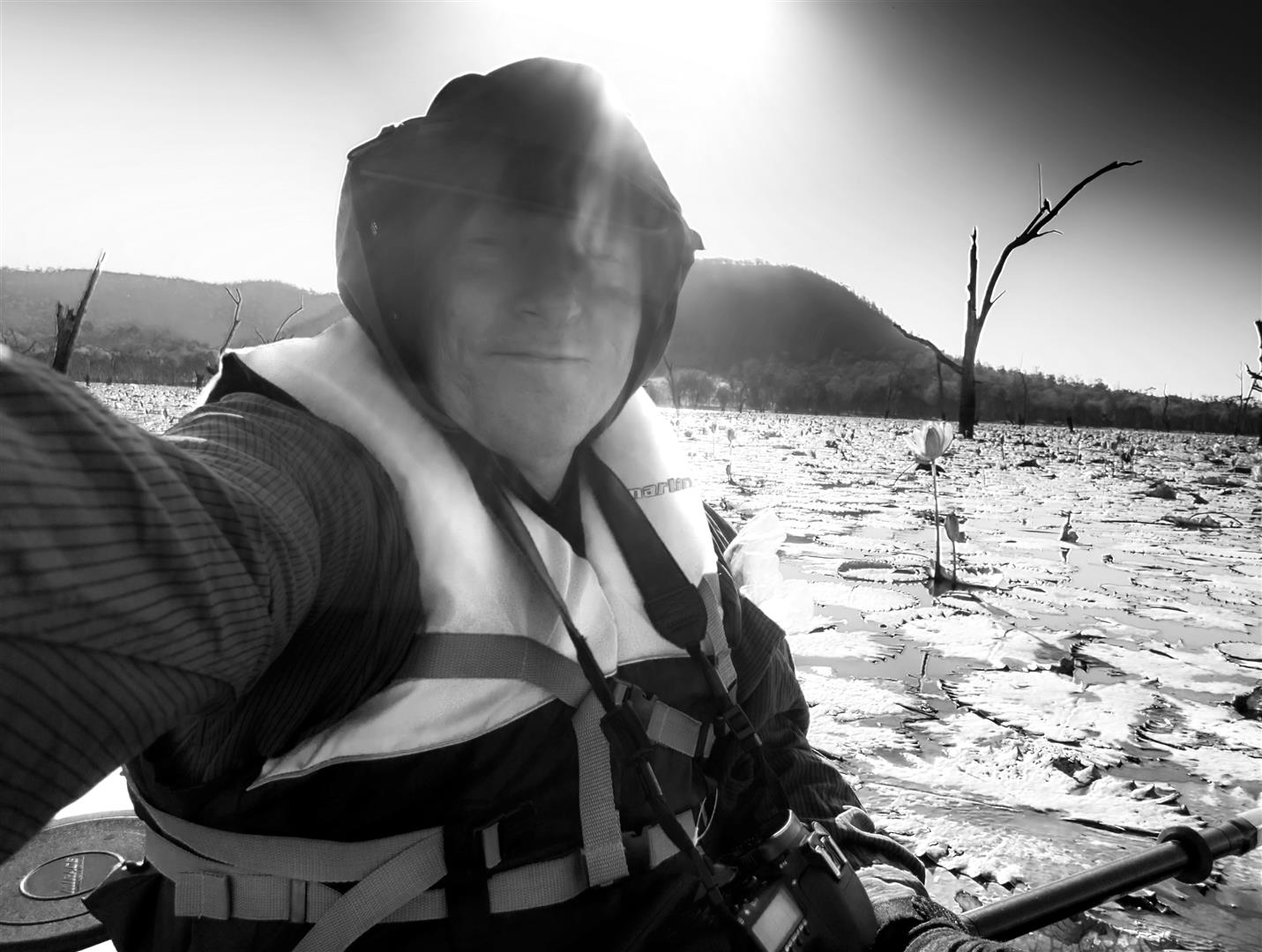 The water soon warmed, and small Bony Bream moved to surface, splashing onto the lily pads and catching the attention of Whistling Kites. The birds broke off from preening to make spectacular diving runs into the water, flying off with tiny wriggling silver meals clutched tightly in talons. I’d never been so close these birds and was dazzled by their rich and subtle hues of brown and tan, with eyes burning bright over the desire to catch breakfast.

Other waterbirds also fished around me, cormorants and egrets flying past and into the water next to my small boat. It was as if by sitting still I’d convinced all that I was just another dead tree, many of which are a feature of this lake. I soon discovered that the dead standing trees were not dead at all — flocks of Tree Martins whirled around them and darted inside the hollows of what were clearly multi-story tenements for countless small birds. Once in, they would peer out again, whipping their tiny heads in all directions to catch the action, screaming at each other in tiny voices. 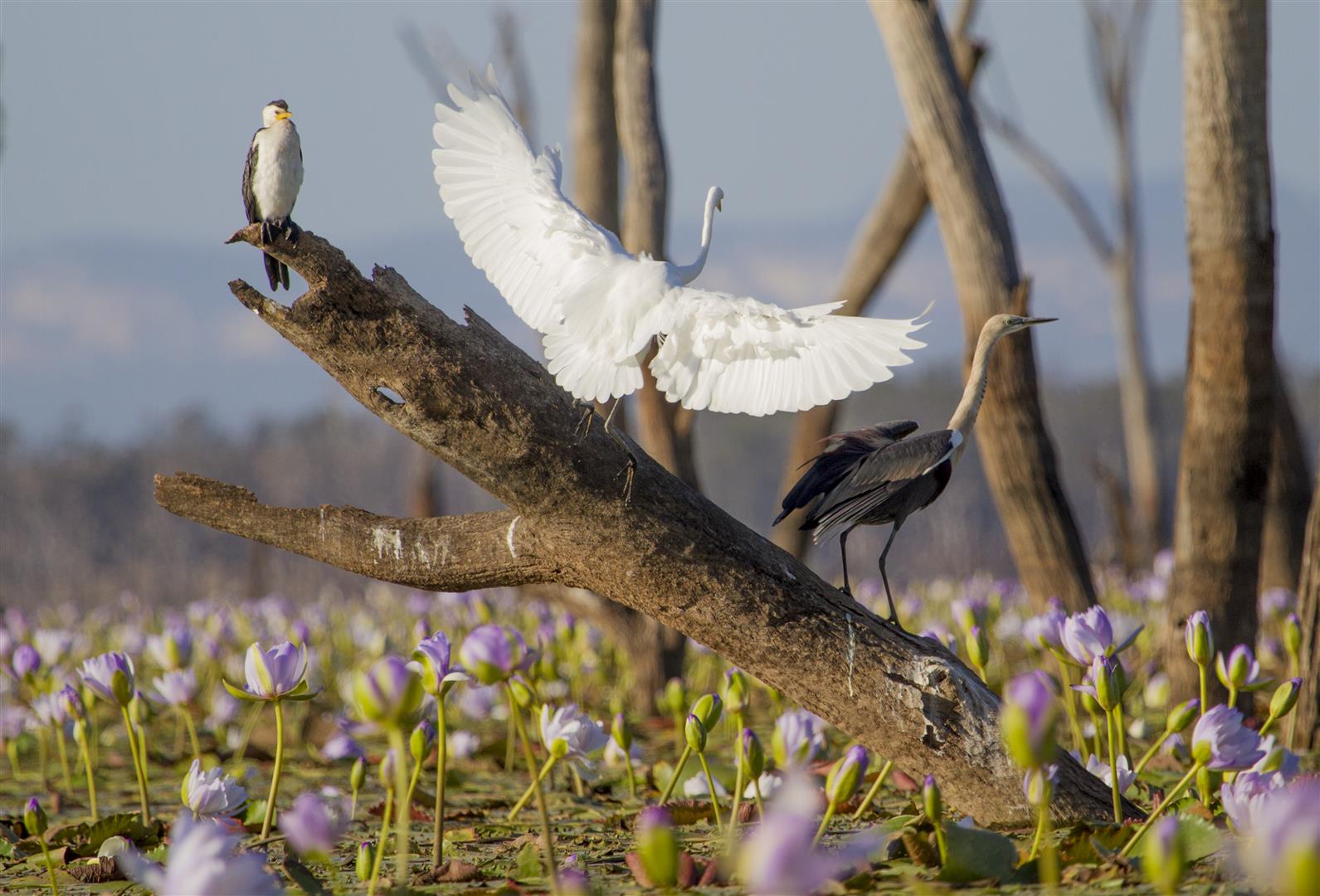 An Intermediate Egret (centre) jostles for perching space with a Little Pied Cormorant (left) and a White-necked (Pacific) Heron.

What life goes on unnoticed in our wild places when there’s no human around to catch it! What a pleasure to think of the places we have managed to protect and the myriad natural dramas played out by the wildlife that call these places home. Yes, we need parks for people, but these wild places are essential to the lives of species other than human. 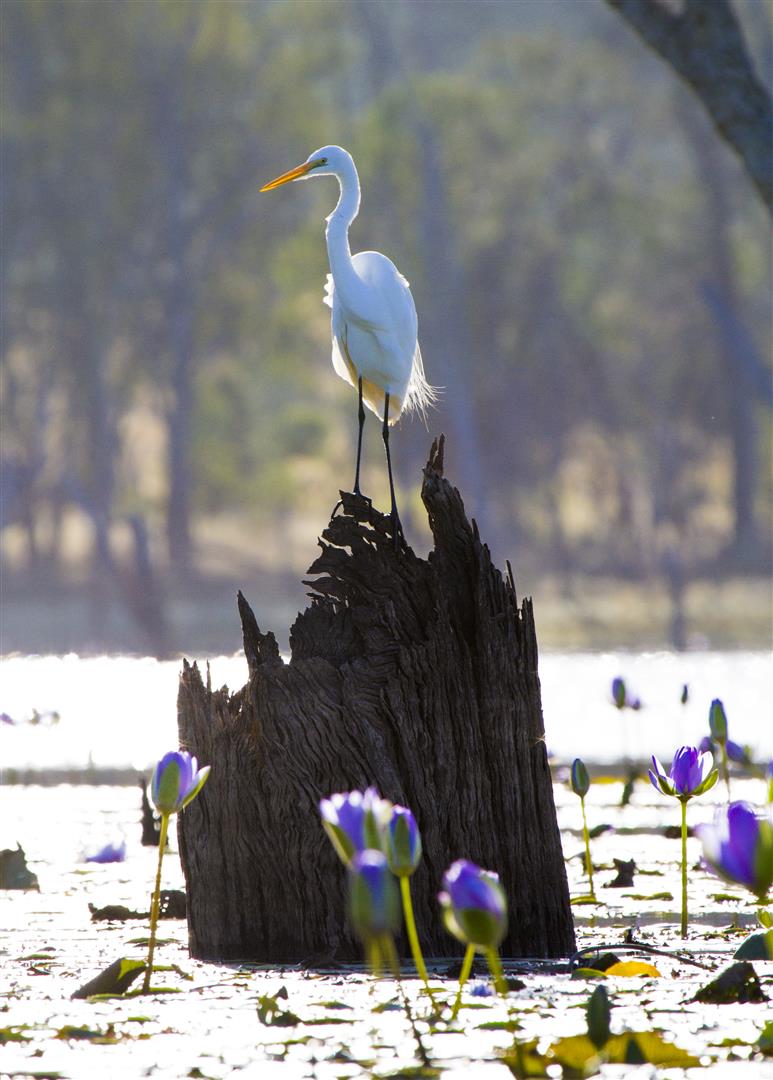 Lake Nuga Nuga is one of 13 nationally-significant wetlands that fall within the Southern Brigalow Belt bioregion. Unfortunately the lake itself is not national park, however the small but significant Nuga Nuga National Park sits adjacent to the lake and preserves remnant vegetation communities, including Ooline and Bonewood, largely cleared from central Queensland.

One of those who fought hard over decades for the protection of remnant patches of Central Queensland scrub in national parks, such as Nuga Nuga, was Jim Gasteen. A life member of the Wildlife Preservation Society of Queensland, Jim travelled extensively throughout four States, surveying areas for inclusion in proposed national parks. Said Jim in the June 1989 edition of Wildlife Australia, “I am convinced that the entire Queensland Central Highlands complex is one of the foremost biological areas in Australia and that the entire ranges should be designated national park and state forest.” 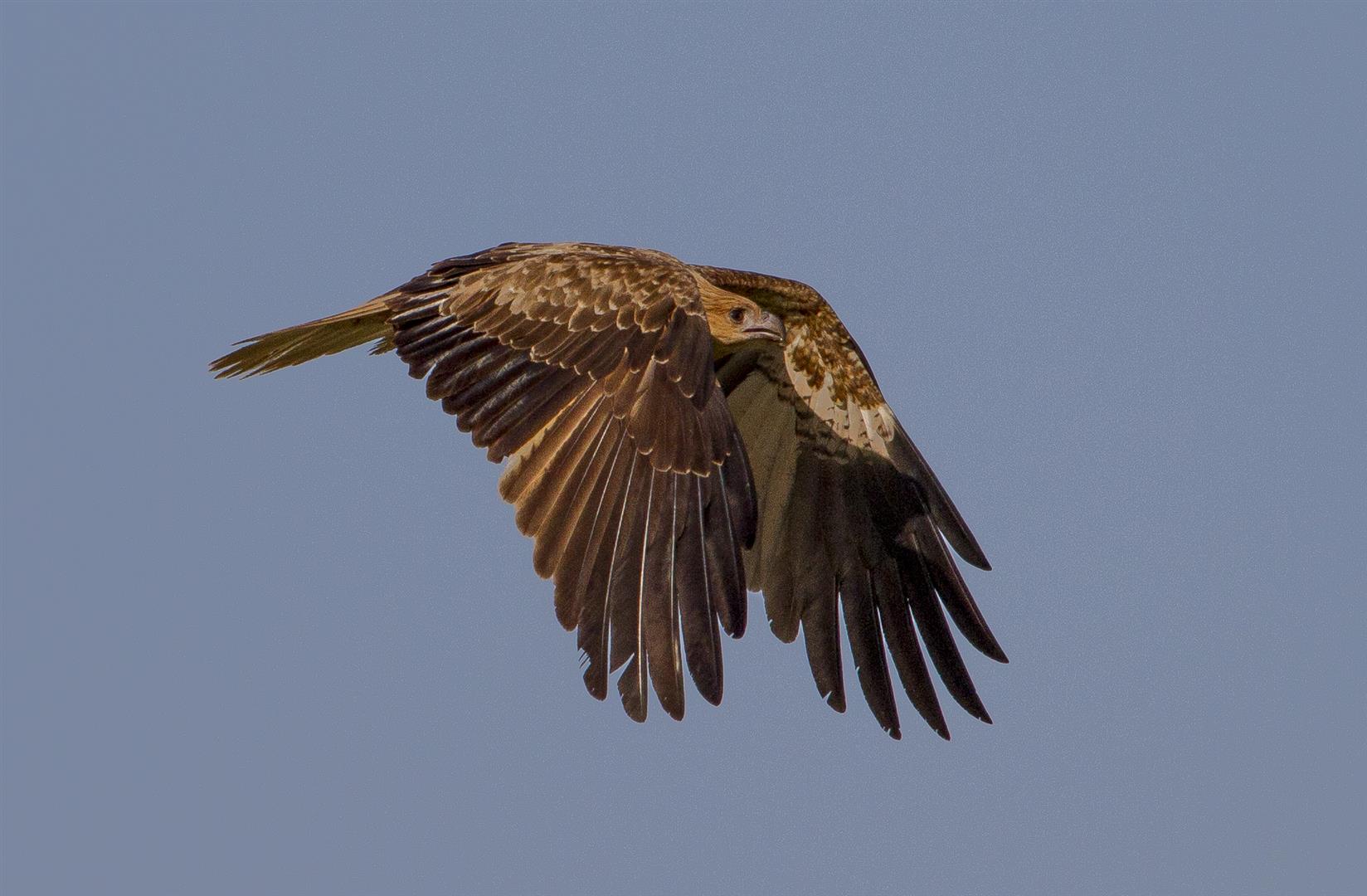 Jim also wrote, in the March 1984 edition of Wildlife Australia, of a “most remarkable experience at Lake Nuga Nuga.” Jim, his brother and a friend were setting up camp late one afternoon. They soon noticed a small and isolated fledgling cormorant being incessantly dive-bombed by a pair of kites. The tiny bird would submerge, only to be attacked again when surfacing. Things eventually looked final for the small bird. “So intense was this uneven battle that the three of us were on our feet with binoculars, absorbed in the drama and wishing there was something we could do to forestall the inevitable.” Suddenly a group of pelicans, until then fishing nearby, swam toward the cormorant and surrounded it, driving off with snapping beaks the attacks of the kites in the fading light, until the raptors gave up and flew away. 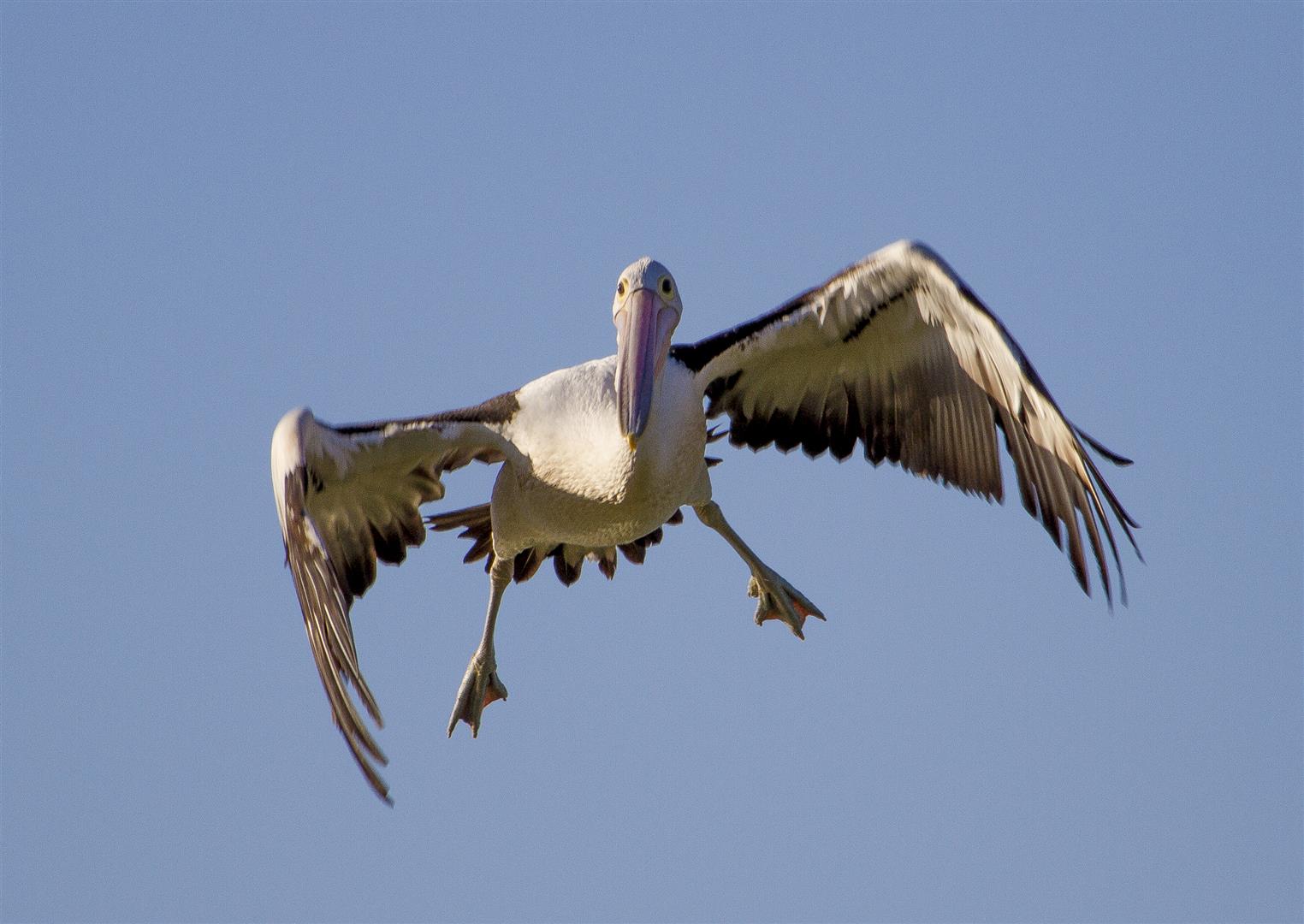 To the surprise of the observers the pelicans then remained in a tight circle around the small bird, without the slightest movement, looking “like sentinels from another era.” Says Jim, “A change had come over the lake — it was something felt rather than seen, for all that were left now were the stars and our own thoughts. We too remained anchored to the spot. Nobody spoke.”

Jim wrote again of this “most remarkable swamp drama” in his book Back to the Bush in 2011 — it was obviously an experience he had not forgotten. 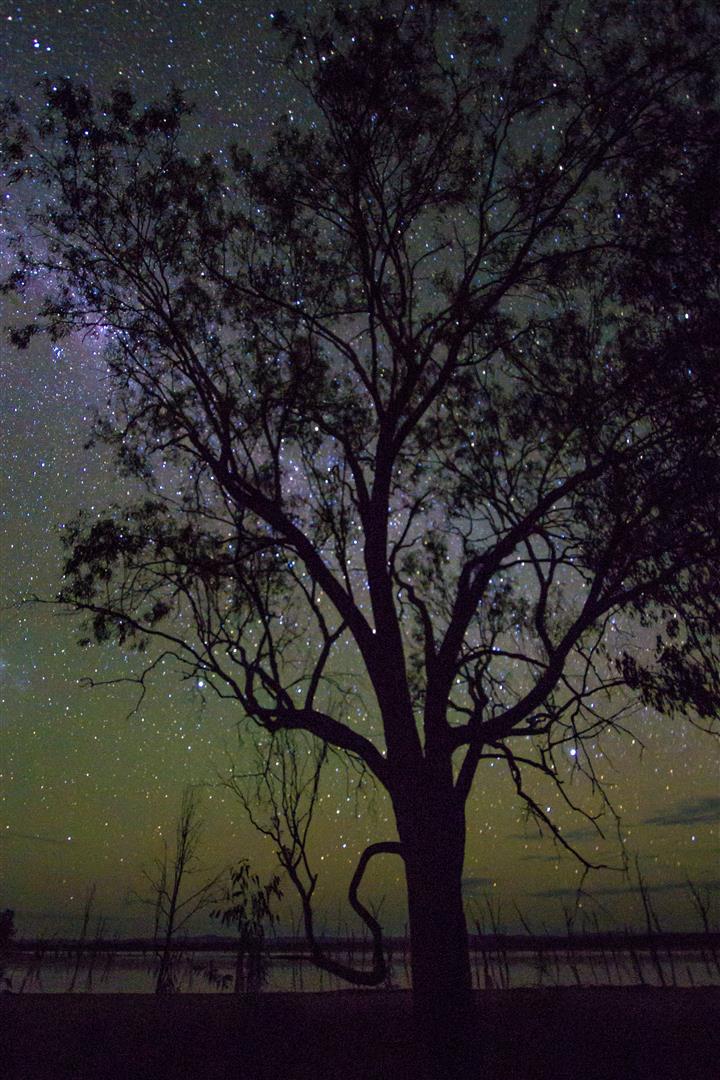 The Milky Way above Lake Nuga Nuga on a quiet, clear night.

Such are our most memorable nature experiences formed, through being present in a wild place — large or small — and just watching what happens around us.

I’d been sitting in my tiny kayak for almost three hours watching the kites battling over small silver fish morsels, and things were starting to quieten as the day warmed up. The lily flowers were open for business and the water was alive with dragonflies and bees.

As I prepared to head back to shore a strange rushing sound descended and I looked up to see a massive squadron of Pelicans flying low over the lake, accompanied by a motley collection of cormorants. It was the perfect end to a terrific morning. I thought of Jim and reflected on how important our national parks and wild areas are as the crucibles of experiences that we can carry with us for many years.