My son and I recently discovered the sport of Geocaching, after accidentally stumbling on a container full of cryptic notes and tiny objects in a local park. So, while staying with relatives in Brisbane over Christmas we decided to try to find a couple of caches in nearby parks. After finding one we got completely bush-whacked looking for a second in rocky scrub along the edge of Kedron Brook in Kalinga Park.

While scrabbling about, Harry’s keen eyes detected an interesting sight — a swirling cluster of native bees gathering on a twig. 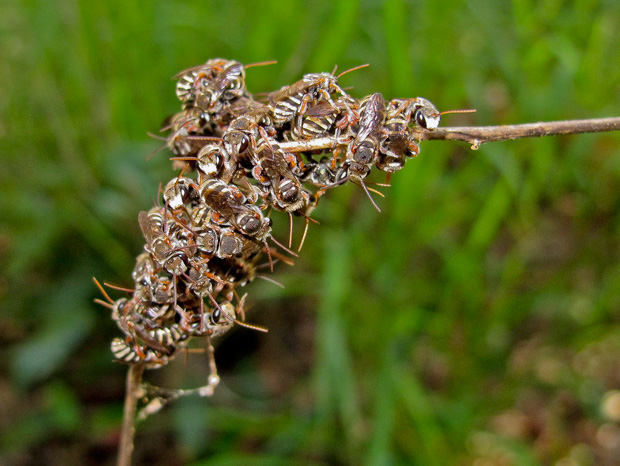 Hobbo again came to our aid, tentatively identifying the insects as Nomia Bees (Lipotriches sp.). From the Australian Museum:

Nomia bees live in urban areas, forests and woodlands, and heath. Most species nest in the ground and a number of females use the entrance and main shaft but dig their own tunnel off to the side. During the day male Nomia bees forage for nectar but at night hundreds of them gather together, clinging onto grass stems. Nobody really knows why they do this but it is a behaviour that some other bees, including blue-banded bees, also show. The behaviour of the females is slightly better understood. Up to three share a nest burrowed into the soil. They take turns guarding the entrance, blocking it with their face during the day and their abdomen at night. Inside the nest the Nomia bees make urn-shaped cells containing a disc of nectar and pollen and a single egg. Each nest may be reused by several generations.

Issue 16 of Aussie Bee magazine, from March 2001, reports the discovery of clusters of Green and Gold Nomia Bees (Lipotriches australica) in a park in Sydney. The article mentions Tarlton Rayment, an Australian naturalist with a particular interest in native bees. In 1935 Rayment wrote A Cluster of Bees, a study of the ecology of Australian bees. He described Nomia bees gathering in clusters, which in some cases comprised up to several thousand individuals. 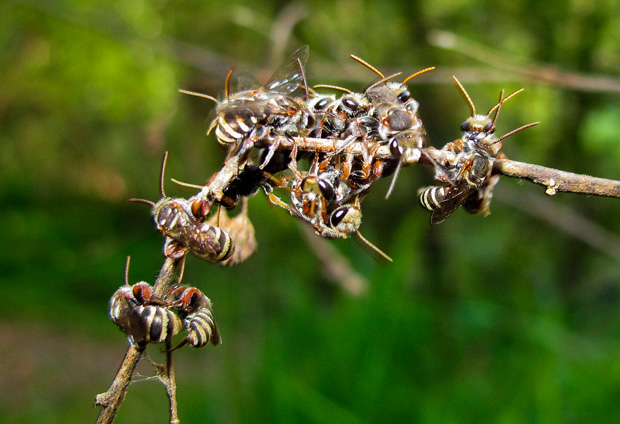 Only male Nomia bees gather in one place like this.

In a detailed scientific study on Green and Gold Nomia Bees (Lipotriches australica), published in 1956, Rayment described how these bees nest in burrows in the ground. Excavating the burrows, he found complex underground chambers and shafts, with brood cells and females guarding the tunnels. A further study in 1994, by Megan Vogel and Dr Penelope Kukuk, looked at well over 1,000 nests of this species in a bare, sandy road-cut in Victoria. The researchers individually marked 66 bees from 50 nests and investigated their foraging and nesting behaviour over a three month period. They found up to three female bees in each nest, and every female collected food supplies and laid eggs. It took the females an average of 1 and 1/4 hours to complete each pollen-collecting trip. 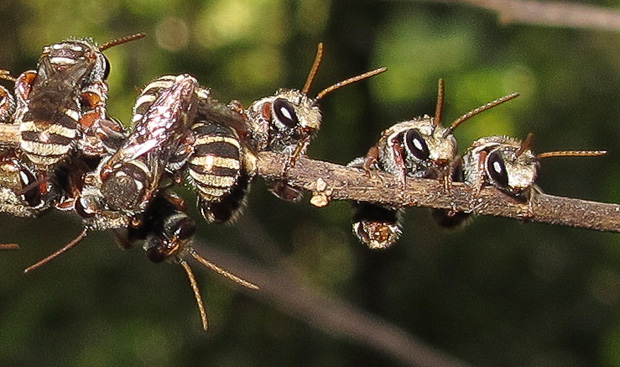 There are over 1,500 species of native bees in Australia! Here a few I’ve had the pleasure of meeting over the years. 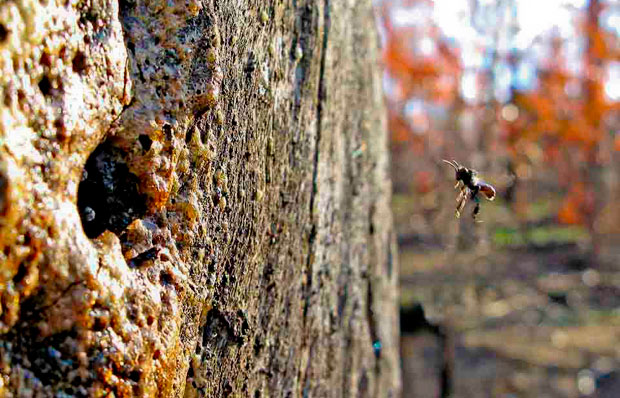 Carbonaria (or Sugar Bag) Stingless Bee (Trigona carbonaria). A social bee, the nest is made of resin and wax and constructed in hollow tree trunks, branches, fallen logs and rock crevices. These bees do not sting but defend their nest by swarming. Photographed at Barakula State Forest, R. Ashdown. 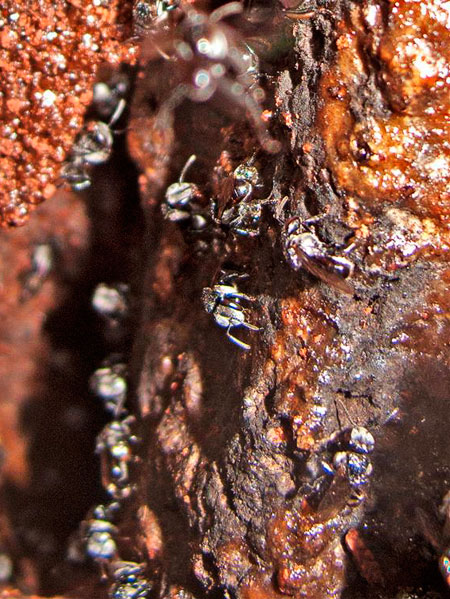 Same type of bee, photographed in a tree at the local school. Photo R. Ashdown. 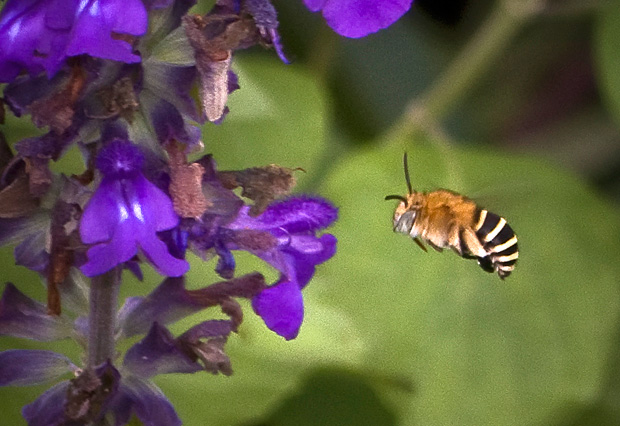 Blue-banded Bee (Amegilla sp.). Like Nomia bees, the male of this species (photographed here in Jacqui’s great garden) gather together to spend the night attached to a grass stem or twig. Photo Rowan Noyes. 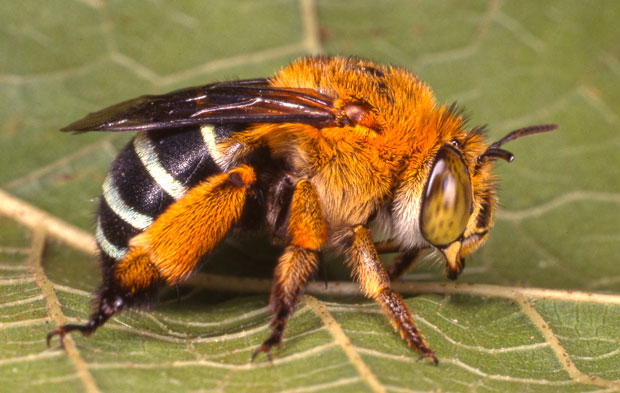 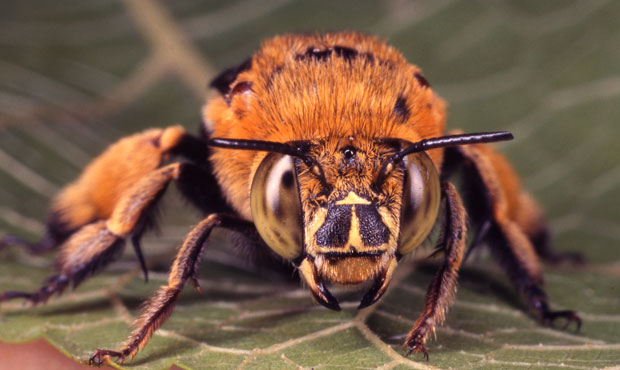 Blue-banded Bee up close. I staked out a burrow in soil under our house for days before I managed to photograph one. Photo R. Ashdown. 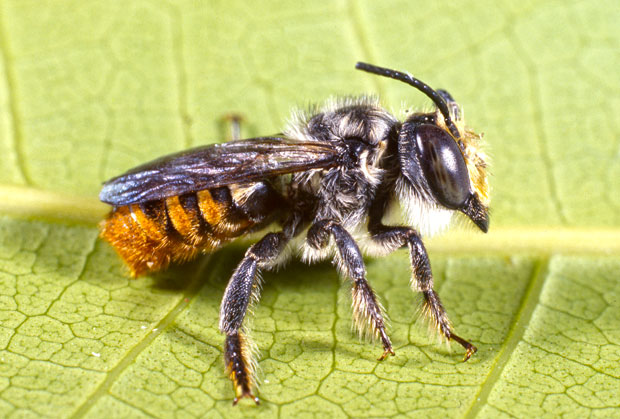 A Leafcutter Bee (Megachile sp.). The female Leafcutter Bee cuts circles out of leaves to line her nest. She provides each egg she lays with a pollen and nectar mixture, and leaves the eggs to hatch into grubs, which will eat the provisions before pupating. The Australian Museum reports that during courtship the male leafcutter bee passes his feet over the female’s eyes in a rubbing motion. She uses the patterns to identify the male as the correct species and potential mate. Photo R. Ashdown. 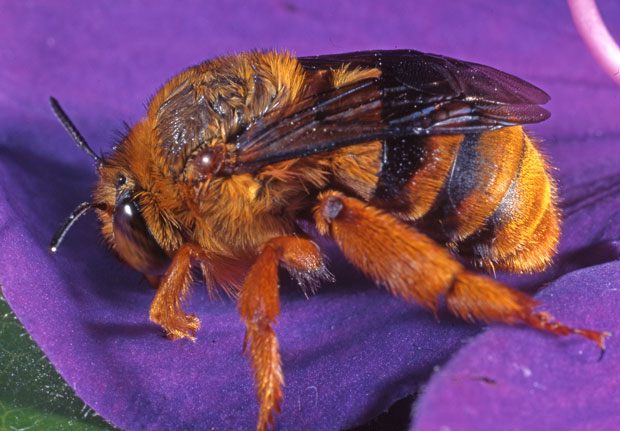 A close relative of the Blue-banded Bee, Teddy-bear Bees (Amegilla bombiformis) are also solitary bees. They dart about and hover near flowers. Nesting individuals of this species of native bee are stalked by the Domino Cuckoo Bee (Thyreus lugubris), which hovers silently and observes before entering unattended burrows and laying its own egg, the grub of which consumes the supplies meant for the teddy bear bee larvae. Also known as Golden-haired Mortar Bees. Photo R. Ashdown.

Thanks again to Rod Hobson for the ID and other information. Here’s a link to Aussie Bee Bulletin. More on Nomia bees here.

I was out in the yard this afternoon looking to see if my calabash vines were pollinating with any success when I noticed these bees all congregating on 3 old hession threads that were left in tatters after holding up last years tomatoes. Eager to know who these strange bees are I searched some images and found this blog.

It never ceases to amaze me what one can find in the wilds of backyard suburbia and now I can add nomia bees to my list. Their behaviour was just as you described where they all seem to mill about with the odd short trip next door and paying little attention to the calabash flowers that I was aware of. Thanks for helping out with the identification of these new bees. 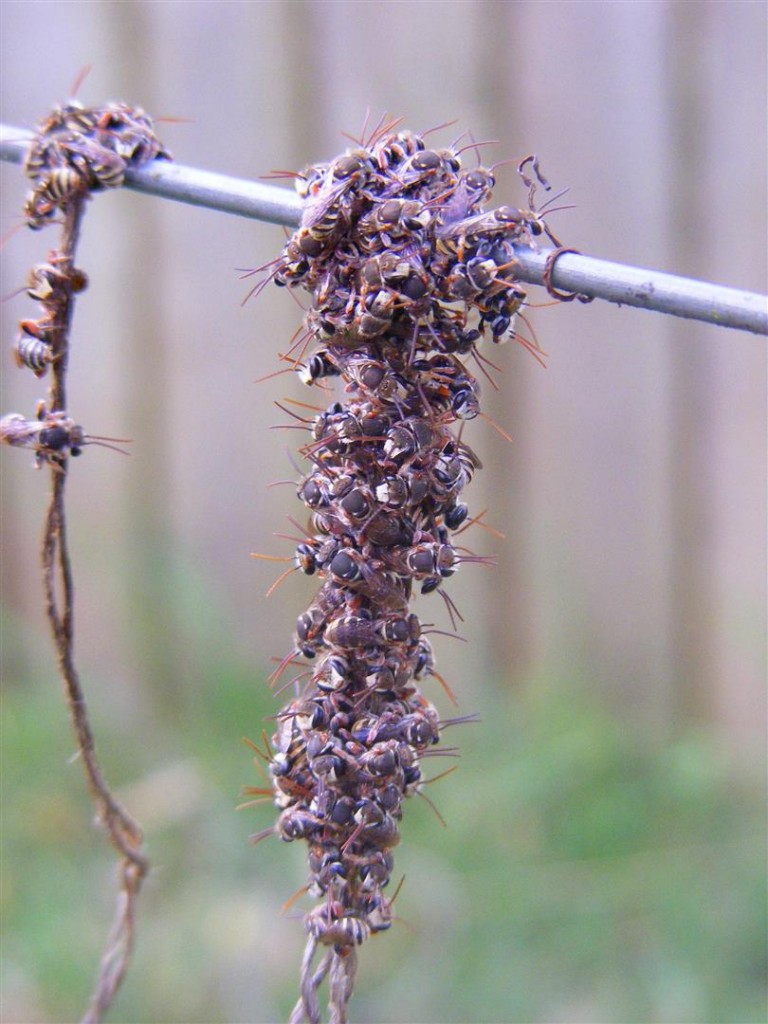 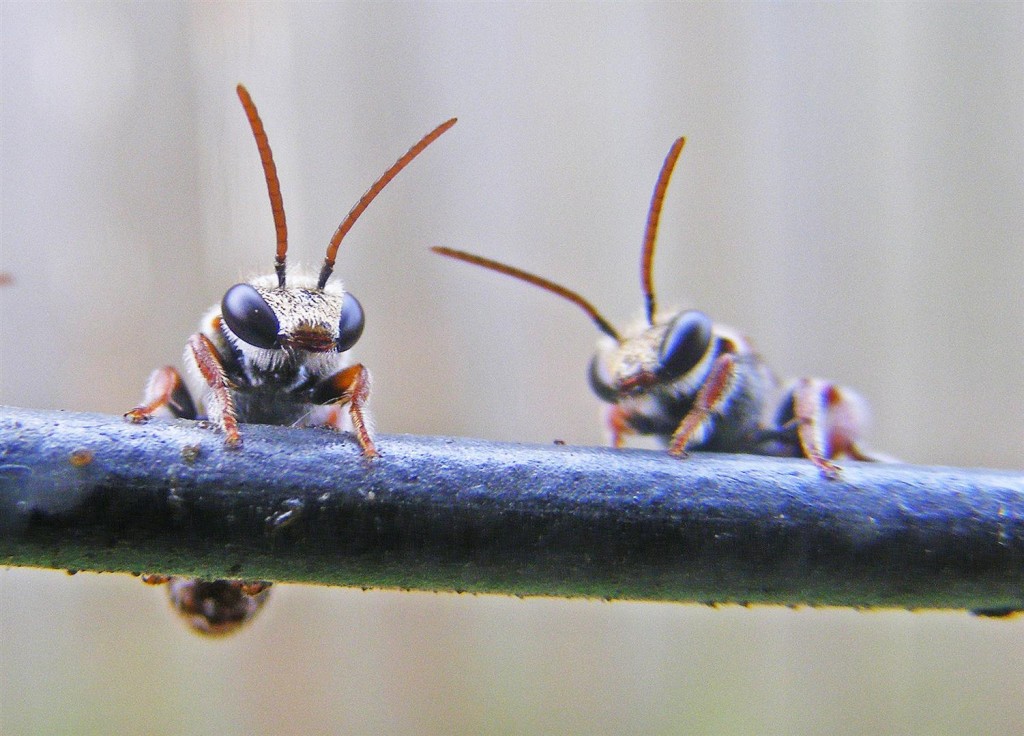 For some wonderful macro images of insects, including Nomia Bees, see here.

3 thoughts on “A cache of bees”