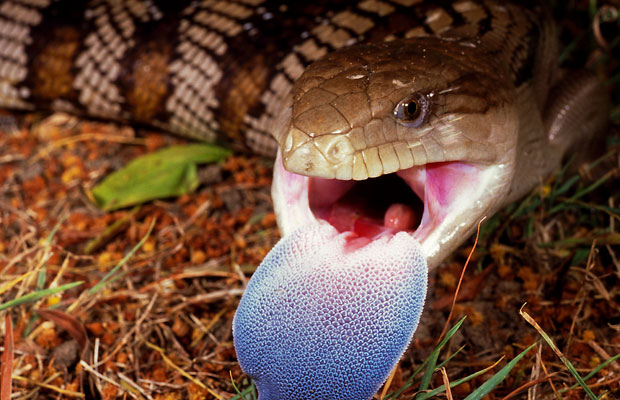 The blue-tongued lizard (Tiliqua scincoides), is the largest skink found in suburban backyards, growing to a length of 65cm from head to tip of tail.

Summer in Queensland means reptiles on the move, as they warm up and get active. This event is usually heralded by fairly stupid newspaper articles about “snake invasions”, as if reptiles had a sudden desire to seek out and attack humans, and as if this was not something that usually happens year in-year out — at least since that last ice age. Maybe papers like our local Chronicle could just explain that it’s an interesting part of the year’s natural history calendar and that people should keep an eye out.

I’m always happy to see reptiles, except that I usually first notice this summer reptile “invasion” when I spot dead Bearded Dragons or flattened Blue-tongued Lizards on the psychotic speedways known as local roads.

Blue-tongued Lizards are great survivors. How do they even still exist in the suburbs? They are slow to move, and apart from a vivid blue tongue (which is flashed about bravely at enemies), they are fairly defenseless. They are an easy target for kids, dogs, cats and cars.

We have several of these large skinks in our yard. A large tail-less adult (named Stumpy Blue by my son Harry) has been hanging around the garage. On a whim, Harry set up a compact camera on a small tripod near where we’d last seen him, set it to record a video clip, tossed down some apple bits, then we walked off to the shops.

When we returned we checked the video footage, not expecting to see anything. Instead we were delighted by a ground-level view of stumpy munching apple, sniffing the camera,  and wandering past. I like the cautious movement and wariness that Harry captured on the video — a small glimpse into the world of the backyard blue-tongue.