Tucked away in a corner of the Toowoomba Botanic Gardens is a fairly nondescript plant with a rosette of large sword-like fronds. Barely noticed for most of the time, it captures walkers’ attention once a year when it throws up a large spike of bright red flowers. It’s a Giant Spear Lilly (Doryanthes palmeri). 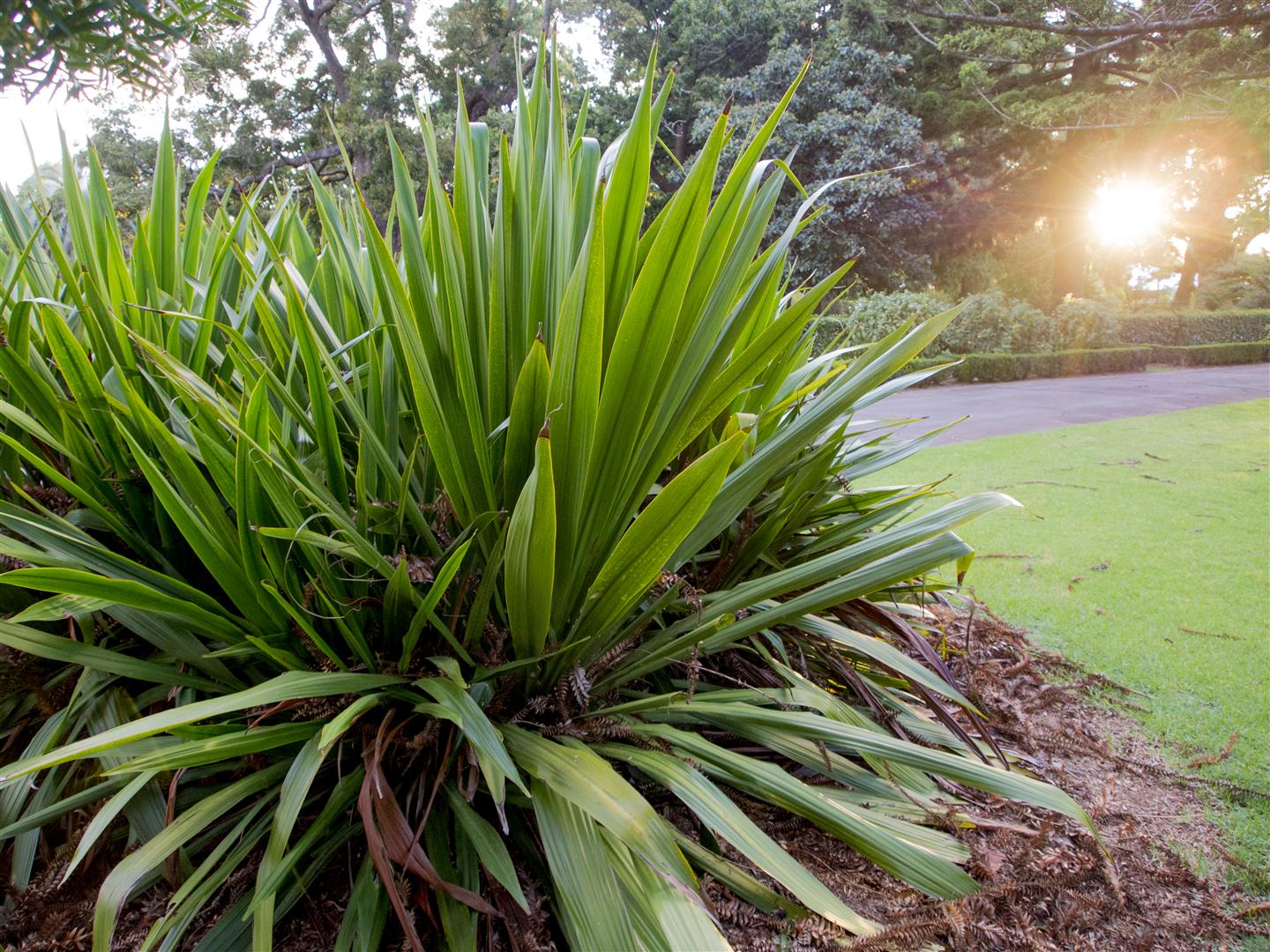 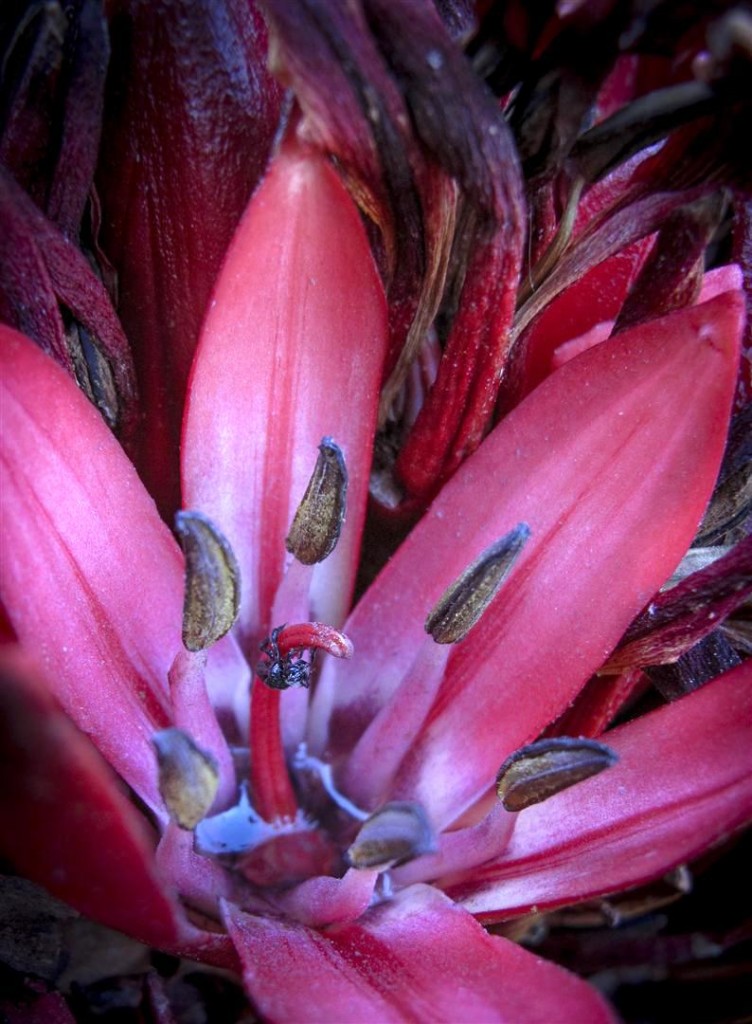 Struggling for a foothold — a native bee inside a flower of the Giant Spear Lilly in the Toowoomba Botanic Gardens. The leaves of this native plant can reach up to 3 metres, while their flower stalks (known as scapes) extend even further — up to 5 metres. Photo R. Ashdown.

The flower spike of 2012 was fairly low to the ground, so I had the chance to peer inside the flowers, where native bees could be seen covered in pollen and struggling to escape. 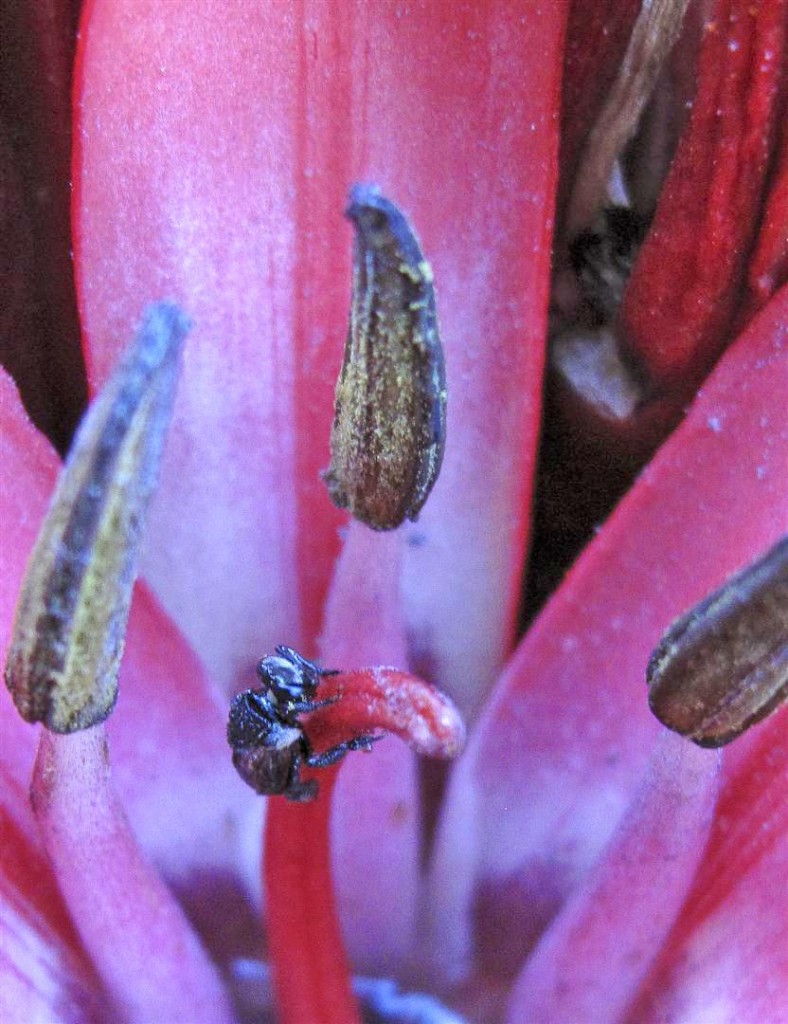 Named after English botanist Edward Palmer (1833-?1899), the Giant Spear Lilly is found in south-eastern Queensland and far north-eastern New South Wales. It lives on exposed rocky outcrops on infertile soils, or on bare rock. In New South Wales it is listed as a ‘Vulnerable’ species, as it is threatened in the wild by weed invasion, frequent fires and illegal seed harvesting. 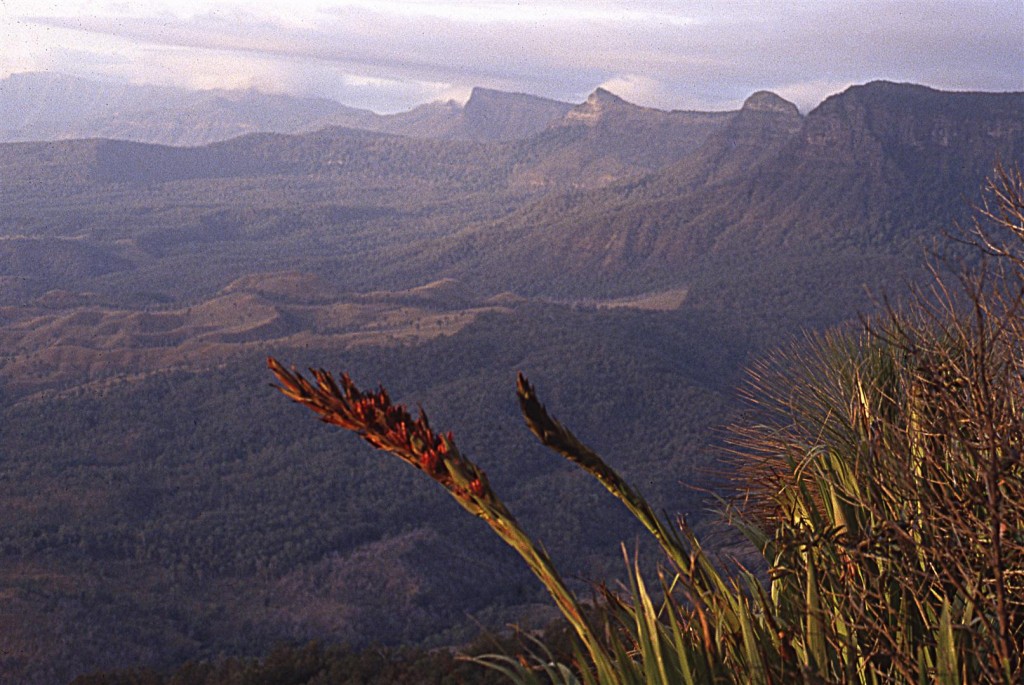 A great place to see these plants in the wild is at Cunningham’s Gap, where the cliff face of Mount Cordeaux is covered in them. Mount Cordeaux (1135 m) is known to Aboriginal people as ‘Niamboyoo’. Part of Main Range National Park, a walking track here leads off  the rainforest circuit and zigzags through rainforest to the exposed upper slopes, ending at a lookout on the southern side (take great care if walking this track). 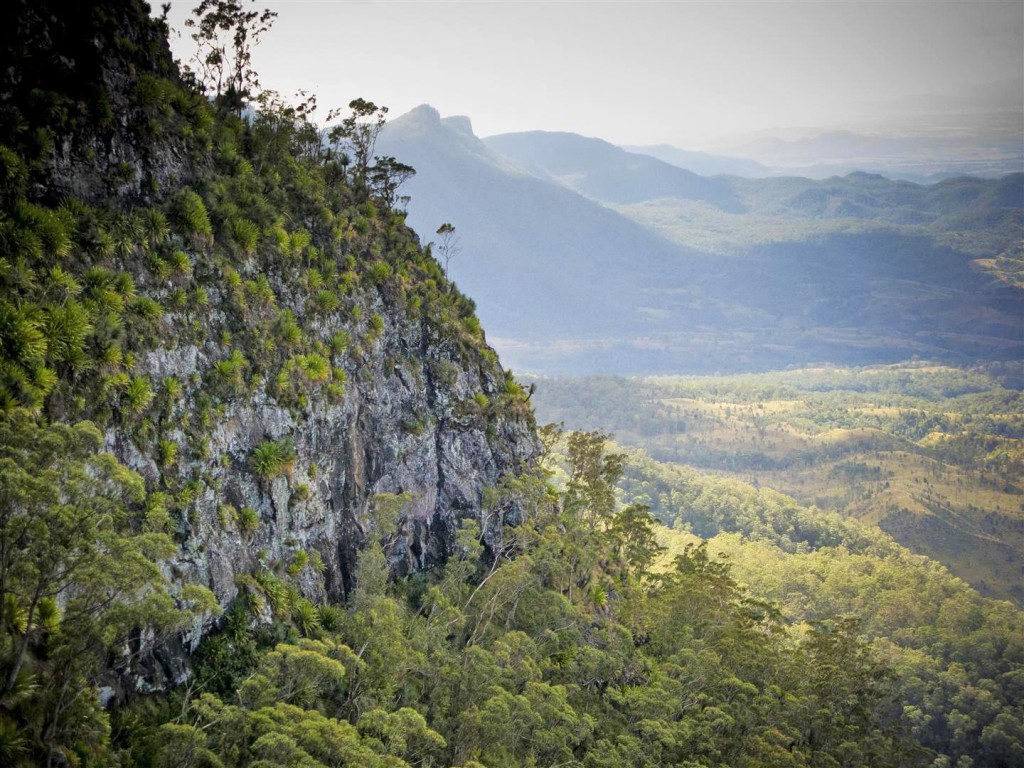 Giant Spear Lillies can grow to three metres tall and four metres wide. The leaves are ribbed to provide structural support. Giant Spear Lillies are known as xerophytes, meaning that they have adapted to dry conditions and do not require much water.

Each rosette of the Spear Lilly flowers once in its lifetime, but after flowering, the plant is able to produce more rosettes. Giant Spear Lillies flower in spring but can take over 13 years to flower. Flowering can be brought on by bushfires, which also promotes the sprouting of root bulbs.

Roasted Doryanthes flower spikes were used as a food source for Indigenous Australians and the roots were mashed into a pulp and made into cakes. 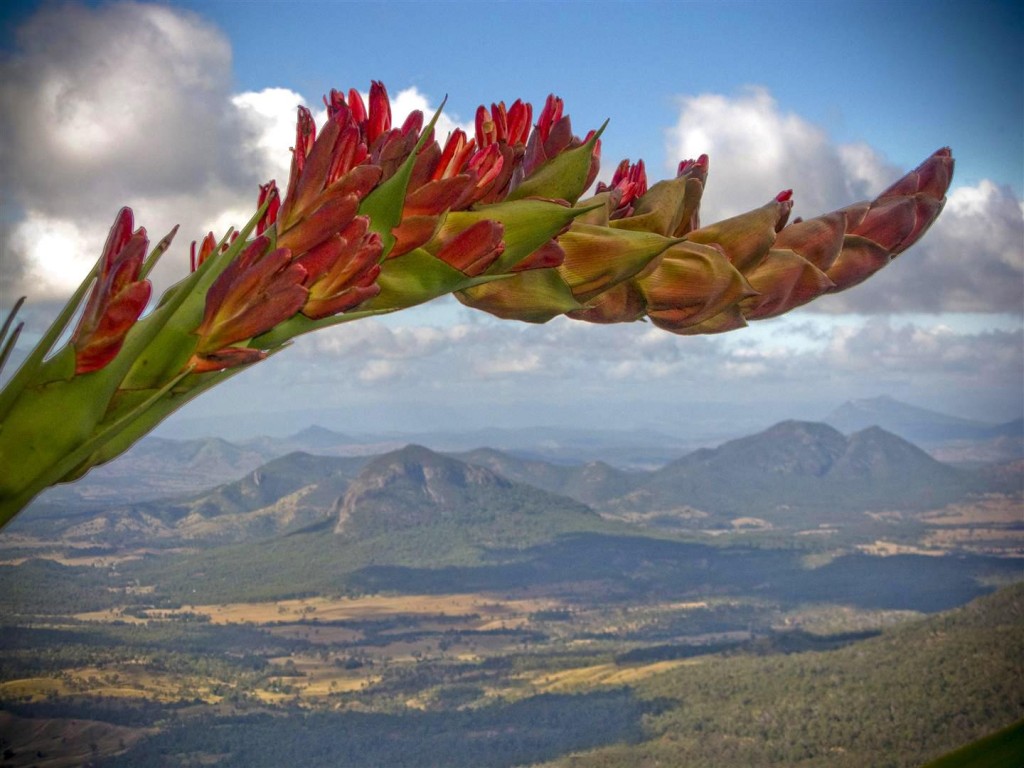 Giant Spear Lilly, Main Range. Looking  south-east from Mount Cordeaux toward Boonah. The flower spike of this species will droop due to the weight of the flowers. Photo R. Ashdown. 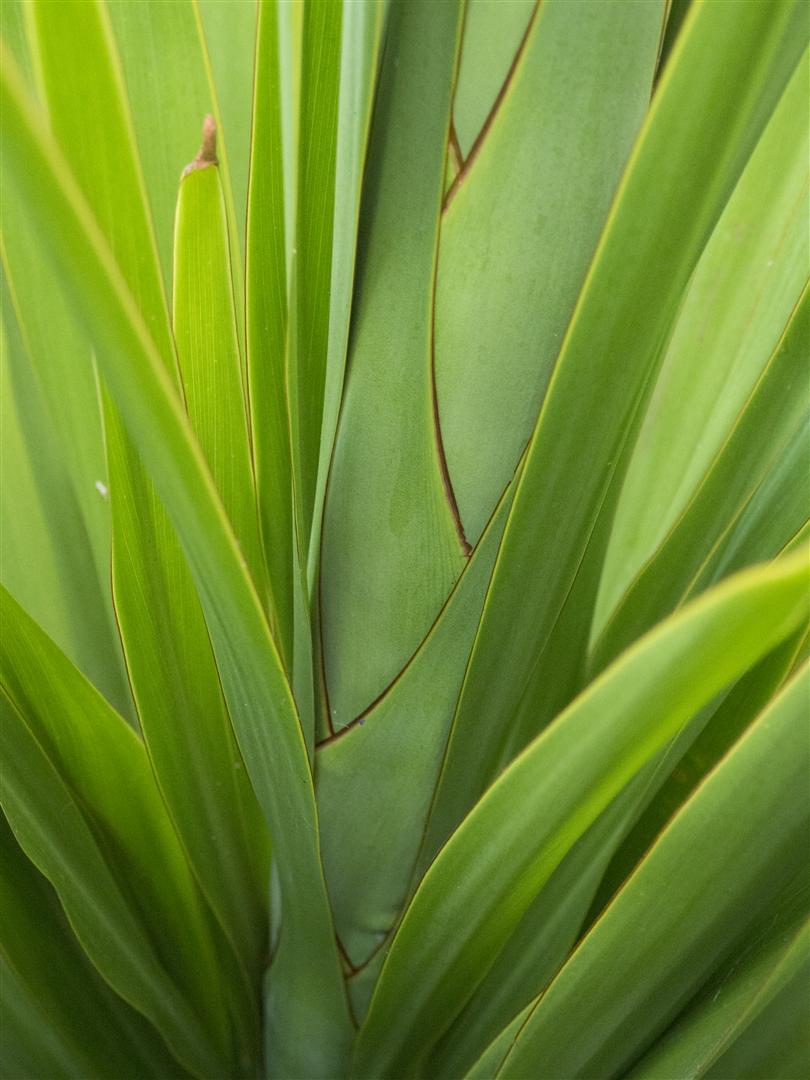