Since the first Australian cicada was formally described in 1803 (the Double Drummer, Thopha saccata), the list of known Australian species has grown to over 240. New cicadas continue to be found.

Queensland Parks and Wildlife Service (QPWS) ranger Rod Hobson, who shares an office with me and bunch of other characters in Toowoomba, has just had the honour of having his name attached to a recently described species. 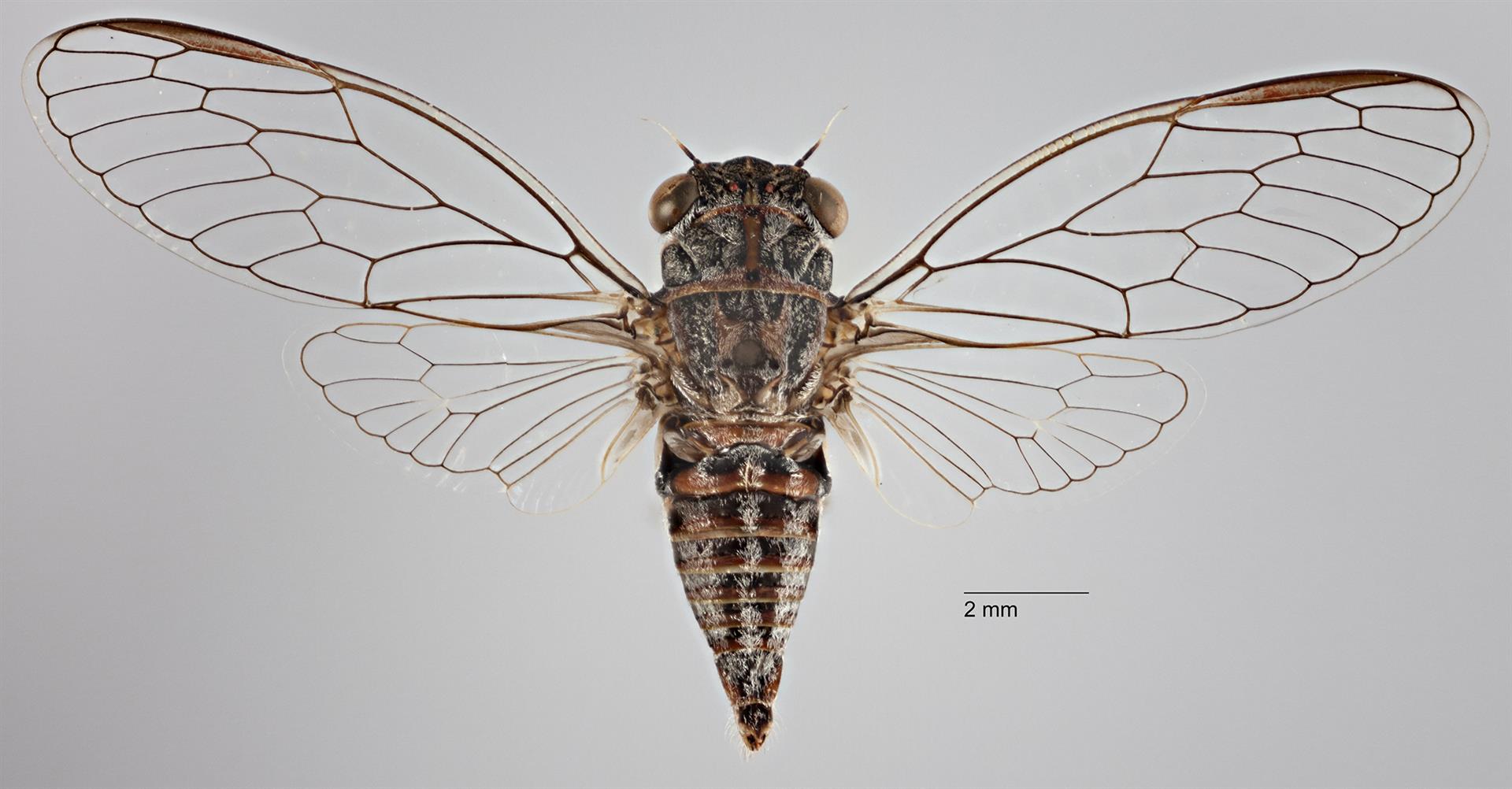 Drymopsalta hobsoni sp. nov., a newly described species of cicada found only in Bringalily State Forest, near Inglewood in southern Queensland. This is the male holotype^ of the species (QM T183037), which was found about 9 km from the Robert Wicks Research Station. Photograph © Queensland Museum, Geoff Thompson.

Drymopsalta hobsoni sp. nov. is one of three new species of cicada described this year by Tony Ewart and Lindsay Popple.* Tony and Lindsay had participated in a QPWS fauna survey at Bringalily State Forest, near Inglewood in  southern inland Queensland. When returning to the site subsequently for a follow-up cicada search, Tony located the new cicada.

D. hobsoni is described as ‘small (less than 15 mm in length) and inconspicuous’ — which is not how I’d describe Hobson. While Ewart and Popple do not suggest a common name, I’d go for something like “The Small and Inconspicuous (Unlike It’s Dodgy Namesake) Brown Cicada”, or similar.

The discovery and scientific description of these three new species of cicada has been part of an ongoing, systematic collection of cicadas throughout Queensland and parts of the Northern Territory. Many new species, especially smaller ones, are being discovered from a wide range of woodland, heath and grassland habitats. Apart from catching the cicadas, researchers also record their distinctive songs, which become valuable tools in identifying known species of these bugs in the wild and for detecting what could be a new species. 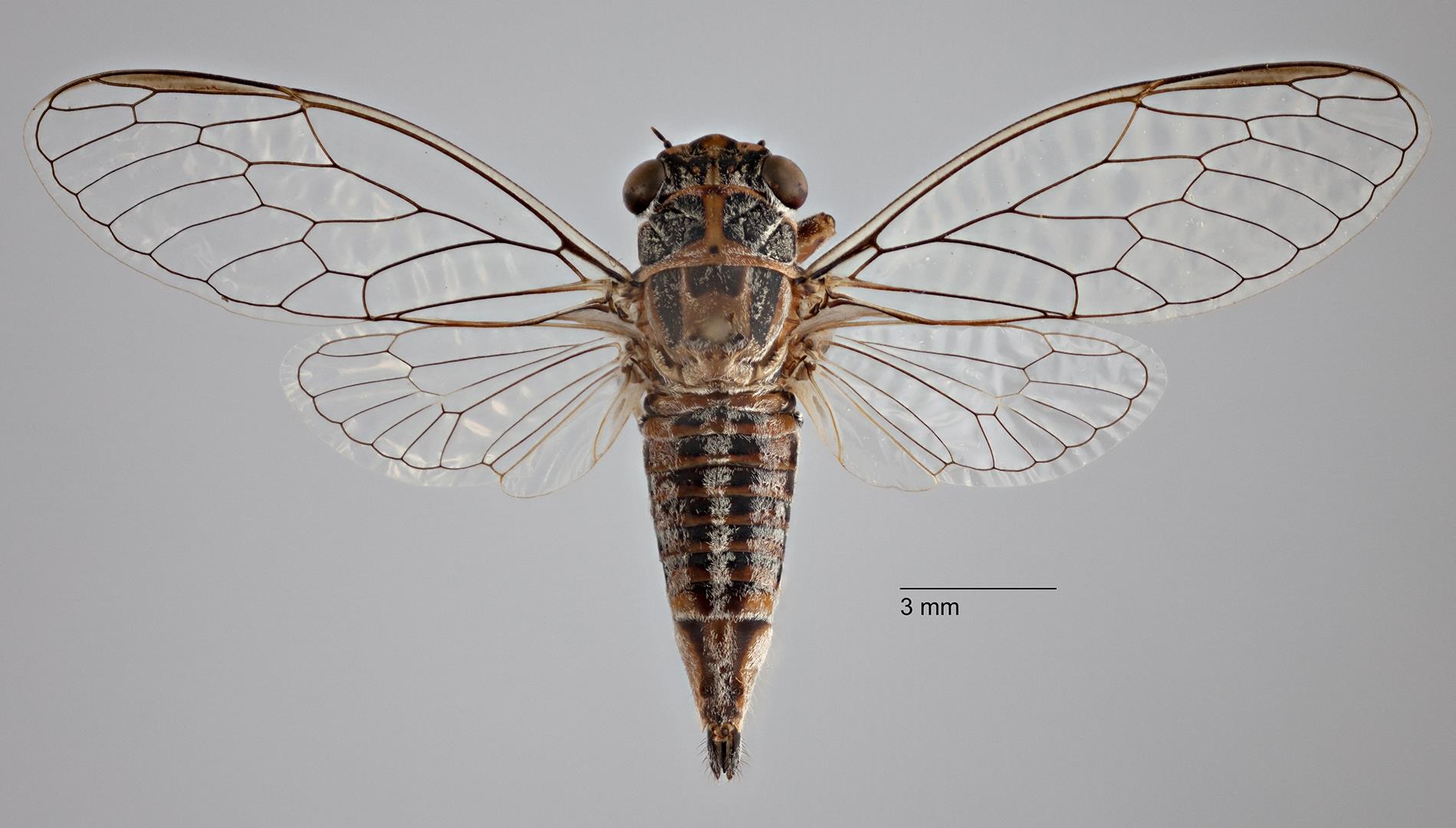 Drymopsalta hobsoni sp. nov. Female. “Cicadas occur in almost all parts of Australia, from the tropical north to Tasmania’s snowfields, from beach sand dunes to the driest desert. The variety of their habitats is almost endless.”° Photograph © Queensland Museum, Geoff Thompson.

While the three new species of cicadas are superficially similar in appearance, their songs are quite distinct from other cicadas — which is usually the case. However, two of the three new species (separated as species by a range of features) have quite similar calls. The buzzing, chirping calls of D. hobsoni and D. acrotela are very close, and the authors describe this as the first formal documentation of a ‘shared calling structure’ between two species of cicada in Australia.

Drymopsalta hobsoni was “Named after Mr Rod Hobson, who organised and arranged the original survey at Bringalily State Forest that led to the discovery of this new species. Mr Hobson has also contributed passionately to furthering the understanding of Queensland’s natural history, particularly in the Darling Downs region*.”

Rod has also had a new species of native snail named after him. See my blog entry from January 2011.

^ “The association of a name with a species, by necessity, must be associated in a way that is beyond question. When a researcher is naming a species (or describing a new species  as it is often put) a single reference specimen is chosen to represent the species; this is known  as the type specimen or holotype.”°

Holotypes form the core of the natural history collections of institutions such as the Queensland Museum (where the holotype of Drymopsalta hobsoni is stored).