While on a break from his job as an air traffic controller, Mike Peisley spotted a peregrine falcon flying outside the tower. Luckily he had a compact camera with him, and grabbed these images of a spectacular raptor as it landed on the ledge outside the window. 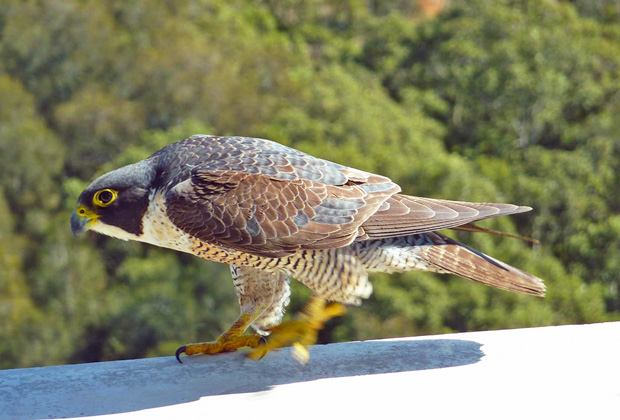 Peregrine Falcon (Falco peregrinus). One of Australia's six falcon species. The specific name comes from the word 'wandering' and alludes to the migratory nature of Peregrines in the northern hemisphere. Australian adult Peregines, however, are not migratory. All photos copyright M. Peisley.

Mike explains how he got the images:

The peregrine approached the tower and zoomed up a bit looking inside, paused and landed on the balcony behind the controllers on duty.

Luckily I was on a break and grabbed my compact camera.  The control tower is about 70m high at our level with 25mm thick glass windows.  I approached the back of the tower cautiously trying not to spook him as the peregrine was tilting his head and either looking up at his reflection or trying to look inside. 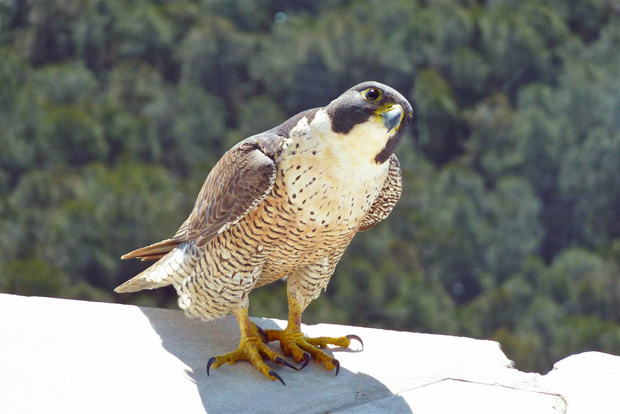 The Peregrine is a compact, heavily-built falcon, stockier than other Australian falcons. It is characterised by short tarsi (the lower part of the visible section of the bird's leg, below the ankle joint - the true knee is hidden by feathers), large feet, and long toes. 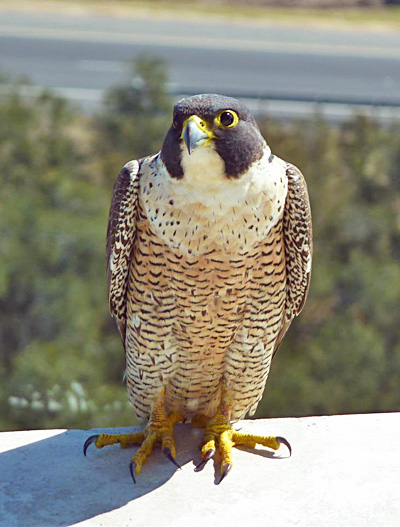 Peregrine Falcons are found throughout mainland Australian and Tasmania. They are solitary, aggressive falcons found in most habitats but usually seen near cliffs, escarpments and wetlands. They fly and soar strongly at great heights and stoop with closed wings in a bullet-like shape. They are capable of striking down quite large birds and often feed on the ground.

From about 5m away I got the best views and pictures I am ever likely to get.  What really surprised me was the size and menacing look to his claws — I was thinking velocoraptor. 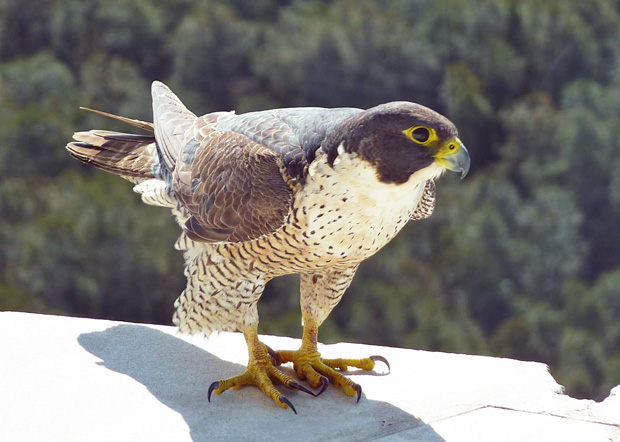 Peregrines nest solitarily in stick nests of other raptors in trees  or on a scrape on a quarry or cliff edge. They also nest on structures such as buildings or silos (maybe this one was checking nest site possibilities). Usually three or four eggs are laid between August and October. Young birds are dependent on parents for two to three months after fledging. Young can remain in the nest area for up to eight months, but then disperse widely (up to 500 km has been recorded, usually about 60 km for males and 130 km for females).

It was a real treat and I felt very lucky to have seen him so closely.  He stayed for about 3 minutes, walking a few meters along the balcony, stopping and looking again in the glass.  In more than ten years I have never seen a peregrine (or any prey bird) land on our balcony and only perhaps one or two cruise past per year. 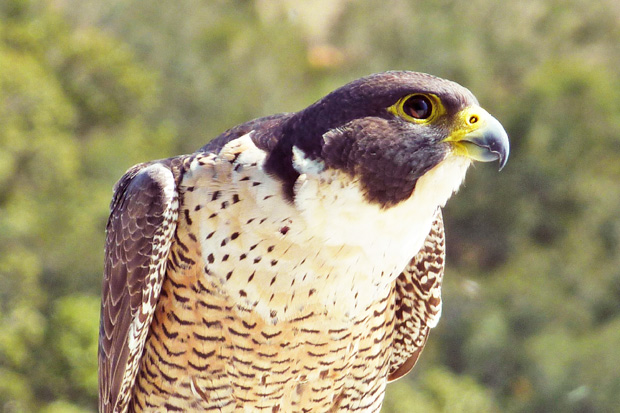 The Peregrine is not globally or nationally threatened, and has increased in urban and agricultural areas in Australia since DDT was banned - this insecticide reduced the thickness of eggshells  and numbers of these falcons declined. They are still heavily (and illegally) persecuted by pigeon-fanciers. Information from The Birds of Australia, A Field Guide by Stephen Debus.

1 thought on “Peregrine up close”