This watercolour painting by Rob Mancini hangs above my desk.
It’s a constant source of inspiration to me. 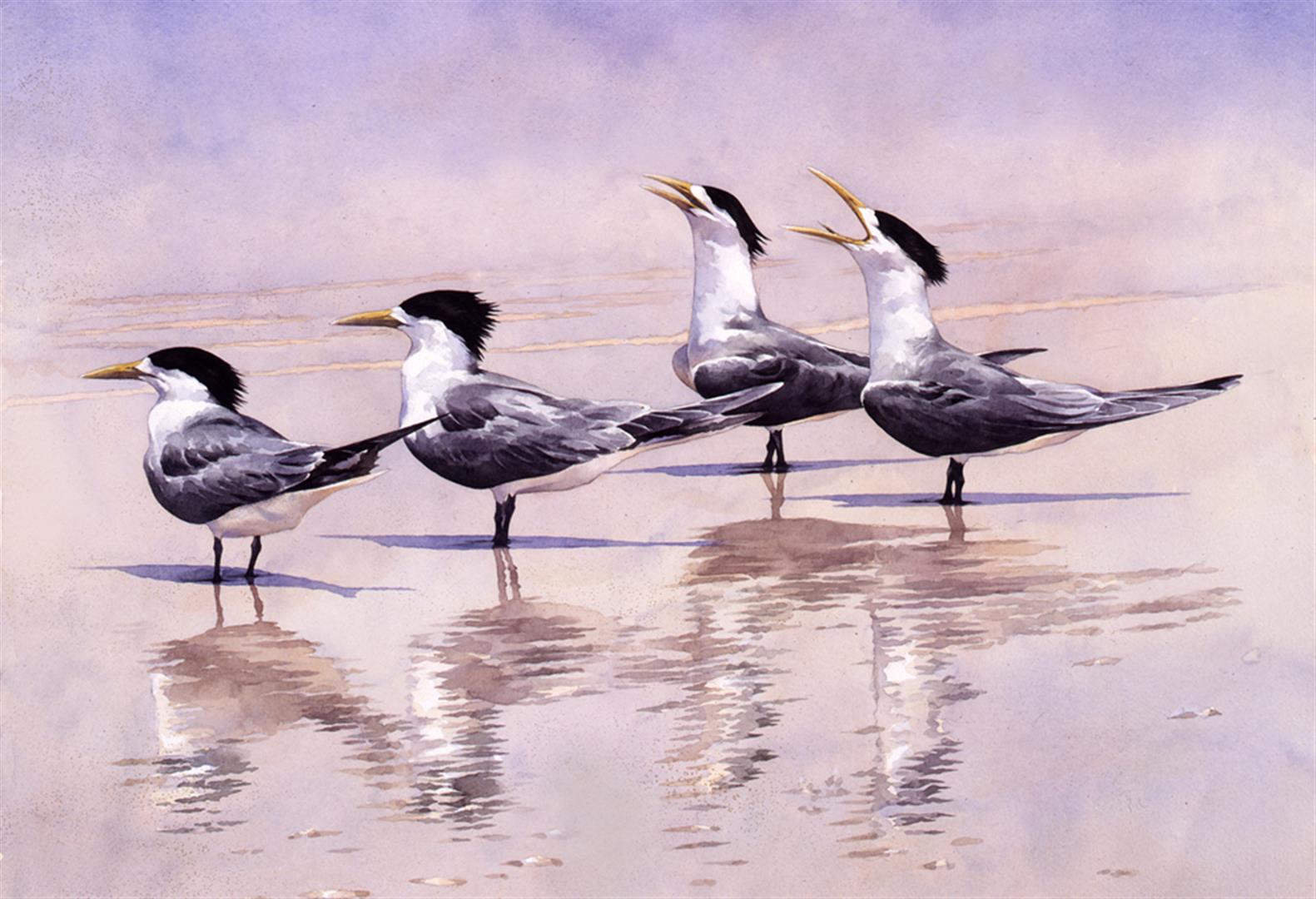 Crested Terns Sterna bergii.  Watercolour by Rob Mancini. Click on the image for a larger view.

I’ve photographed terns, those feisty survivors of the edges between land and  sea, with mixed results. My photographs never seem to capture the enjoyment of seeing these characters live. This painting, however, has done just that.

This is an image that exudes mystery and majesty. There has been no attempt to nail down the birds with clinical precision, instead, we are granted a dazzling peek into the fast-paced lives of these fabulous animals — burning bright with tenacious life in the salty sea-spray and early light, with their precise but ruffled forms.

I am reminded that no matter how much I might think I know birds I am only ever struggling to get an understanding of them — an outsider peering in, and my human intelligence and arrogance is to no avail when faced with the transient beauty and other-worldly nature of such creatures. This is a brief, shimmering glimpse into another reality.

We need another and a wiser and perhaps a more mystical concept of animals. Remote from universal nature and living by complicated artifice, man in civilization surveys the creature through the glass of his knowledge and sees thereby a feather magnified and the whole image in distortion. We patronize them for their incompleteness, for their tragic fate for having taken form so far below ourselves. And therein do we err. For the animal shall not be measured by man. In a world older and more complete than ours, they move finished and complete, gifted with the extension of the senses we have lost or never attained, living by voices we shall never hear. They are not brethren, they are not underlings: they are other nations, caught with ourselves in the net of life and time, fellow prisoners of the splendour and travail of the earth.

― Henry Beston, “The Outermost House: A Year of Life On The Great Beach of Cape Cod.”

Rob Mancini was a featured artist in Penny Olsen’s 2001 book “Feather and Brush: Three Centuries of Australian Bird Art.” From that book:

The subjects that capture (Rob’s) interest are the waterbirds, especially migratory waders, subtly-plumaged birds that are often over-looked. “I get pretty excited by raptors too, but who doesn’t?’ An accurate rendering alone does not hold much interest for him, rather he hopes to convey a more emotive experience. He believes that the obsession with super-realism has led to some misunderstanding about creating a realistic image. Although certainly interested in scientific accuracy and believability, rather than attempting to render every minute detail he aims to evoke a realistic impression. “It’s worth resisting the temptation to paint every detail, instead allowing the eye of the observer to put them in.”

Rob has just made a selection of fine art prints of his paintings available for sale on his Etsy webpage. Included is a limited edition print of the Crested Tern painting featured here (from an edition of 300, hand-signed and numbered, printed by offset lithography on heavyweight art paper). If you’re ever lost for a gift idea, supporting an Australian wildlife artist by purchasing one of these prints might be the go. Rob also has a collection of his illustrations on his deviantART page.

1 thought on “Life on the edge”