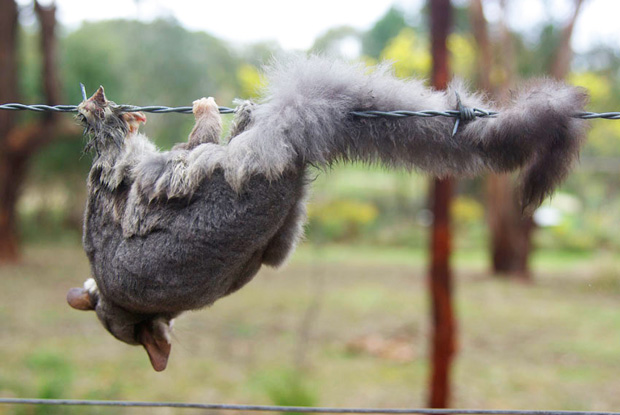 Anecdotal reports from landholders and biologists suggest that the entanglement and subsequent death of animals on barbed-wire fences is widespread in Australia. Rodney van der Ree, “Barbed Wire Fencing as a Hazard for Wildlife”, The Victorian Naturalist, 116 (6), 1999.

Over ten years ago Rodney’s study found that 62 species of wildlife have been recorded as being trapped on barbed-wire fences. Recent sources quote 72 species. Figures can’t prepare any naturalist for the disappointment of finding some native creature dead on a fence — it seems like the only time you get to see something up close it’s usually dead.

Rod found gliding marsupials to be the most commonly caught animals, followed by birds and bats. His records came from a wide range of  habitats, and 95% of entanglements occurred on standard-height farm fencing. 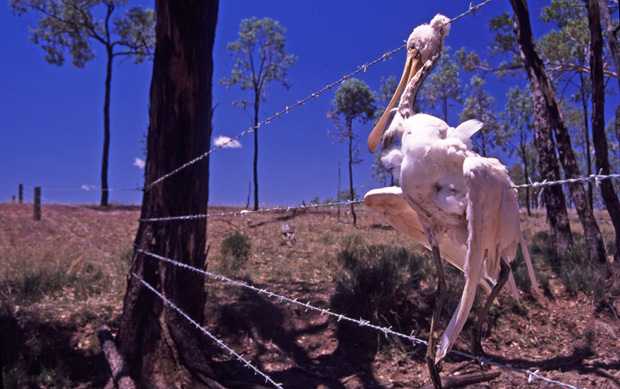 The barbed-wire fence was a useful invention for land-holders. Wire fences used before the invention of the barb consisted of only one strand of wire, which was constantly broken by the weight of cattle pressing against it. Michael Kelly made a significant improvement to wire fencing with an invention that “twisted two wires together to form a cable for barbs — the first of its kind in America,” according to Henry D. and Frances T. McCallum, the authors of The Wire That Fenced the West. Known as the “thorny fence,” Kelly’s double-strand design made the fence stronger, and the painful barbs taught cattle to keep their distance.

Predictably, other inventors sought to improve upon Kelly’s designs; among them was Joseph Glidden, a farmer from De Kalb, Illinois. In 1873 and 1874, patents were issued for various designs to strengthen Kelly’s invention, but the recognized winner in this series of improvements was Glidden’s simple wire barb locked onto a double-strand wire. Glidden’s invention made barbed wire more effective not only because he described a method for locking the barbs in place, but also because he developed the machinery to mass-produce the wire. His invention also survived court challenges from other inventors. Glidden’s patent, prevailing in both litigation and sales, was soon known as “the winner.” Today, it remains the most familiar style of barbed wire. Glidden’s patent, No. 157124, was issued on November 24, 1874.

Native Americans referred to this wire as “the Devil’s rope.” 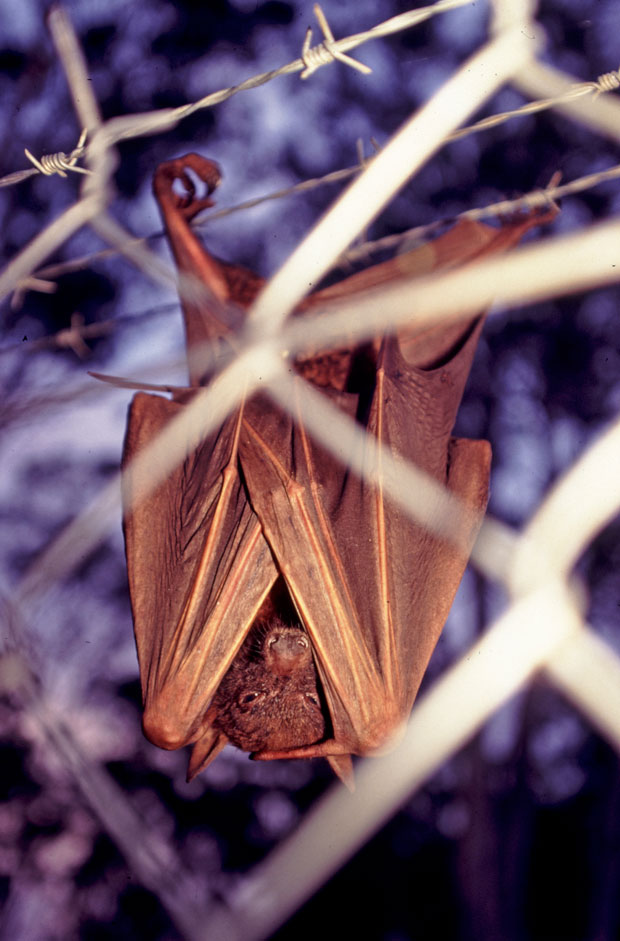 Little Red Flying Fox (Pteropus scapulatus), on a golf driving range fence, suburban Brisbane. It’s a depressing day as a wildlife fan to come across a beautiful animal such as this that has recently died on a fence. In this case the fence was within the Brisbane Koala Conservation Zone, where barbed wire-topped fences are banned. Photo R. Ashdown.

What can be done about animals and barbed-wire fences? Luckily there is now lots of good information about alternatives.

Wildlife Friendly Fencing is a website dedicated to providing information about reducing the effects of fencing on wildlife.