I’m currently writing the Queensland section of the NatureWatch feature for Wildlife Australia, the magazine of the Wildlife Preservation Society of Queensland. For the Winter 2012 edition I enjoyed putting some words together to accompany more exciting images of a special raptor by my brother-in-law Mike Peisley. 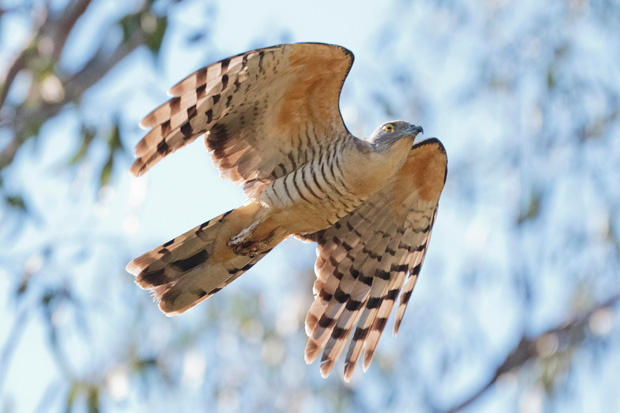 One of Australia’s most beautiful birds of prey can be seen travelling through urban areas of south-eastern Queensland from early winter to mid-spring. The Pacific Baza or Crested Hawk (Aviceda subcristata) is a striking animal, with bright yellow eyes, crest and a colourful profusion of brown, blue-grey and white feathers. It is distinguished from other Australian raptors by its boldly barred breast, broad rounded blue-grey wings wit barred flight feathers and the broad black band at the end of its tail. 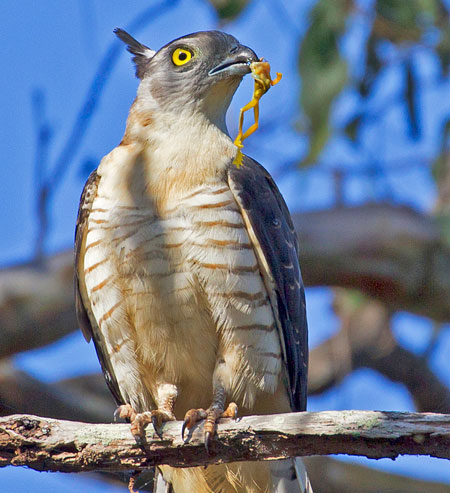 Pacific Bazas are omnivorous, mainly eating tree-frogs (such as this Graceful Treefrog) and insects, however they will also catch small birds, snakes and lizards and will eat fruit, such as figs. They can sometimes be seen clambering around in the foliage to snatch prey. Photo courtesy Mike Peisley

Pacific Bazas can be secretive and difficult to spot through much of the year. However, outside their breeding season they range widely, often in groups, from upland to lowland areas in south-eastern Queensland. Parties of up to 30 birds have been observed from March to December. 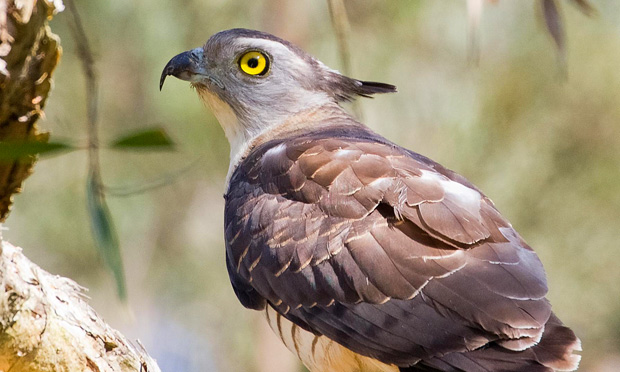 Bazas have magnificent eyes. Red oil drops in the eyes assist them to discern green prey, such as the frog being consumed in the image above. For more on vision in birds, see well-known naturalist Ian Fraser’s article on page 7 of Gang Gang, the newsletter of the Canberra ornithologists. Photo courtesy Mike Peisley

It is thought that the seasonal movement of Pacific Bazas may be a response to variations in the numbers of their favoured prey, which includes insects such as preying mantids, stick insects and large grasshoppers. As these are often less common during winter at higher altitudes, this may explain the movement of Bazas to the coast, where there is more to catch and eat. Where to see them Pacific Bazas can be seen in many types of habitat, from rainforest to suburban gardens, however they not usually spotted in treeless or open areas. When moving in groups in the non-breeding season they may be seen in backyards and have even been spotted on clotheslines and on the balconies of multi-story buildings. Bazas are highly manoeuverable birds that chase and pursue their prey in the outer foliage of trees and shrubs. On fine, warm days single birds, pairs or small parties  soar overhead and their distinctive call — a mellow double whistle described as ‘whee chiu’ (the first note rising and the second falling in pitch) can be heard drifting down form the skies overhead or in local patches of bush. As spring approaches keep an eye out for mated pairs soaring together and performing acrobatic, tumbling aerial displays.

(With thanks to Greg Czechura.)