South Australian authorities are battling wet weather in their search for the body of a man killed in a shark attack. It’s believed two great whites grabbed abalone diver Peter Clarkson as he was surfacing near Coffin Bay on the Eyre Peninsula yesterday. http://www.abc.net.au/worldtoday/content/2011/s3142709.htm

The tragic death of an abalone diver in South Australia this week has brought the spectre of shark attack back into the public consciousness. It has also re-ignited debate about the conservation of Great White Sharks, with some fisherman concerned that conservation measures will mean that numbers of this top-order predator increase, and along with it, attacks on humans. Conservationists and biologists, on the other hand, believe that shark numbers around the world are continuing to decline, with inevitable effects on marine ecosystems. 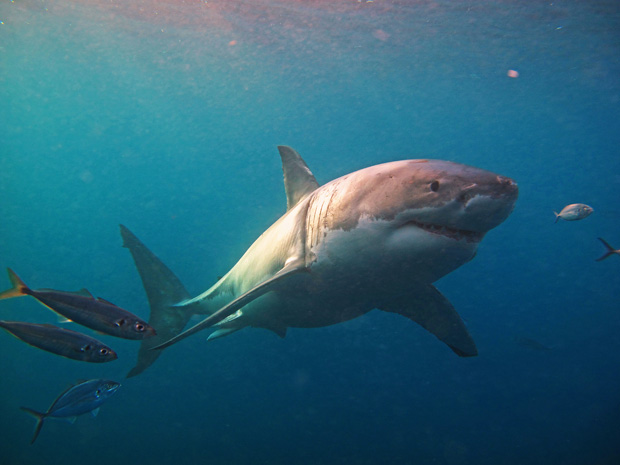 Great White Sharks are majestic, and feared, ocean predators. While invincible in appearance, these animals are in decline. They are targeted commercially and by recreational fishermen throughout parts of the world for their valuable jaws and teeth. Their fins, like those of other sharks, are in high demand for soup. It is estimated there are fewer than 10,000 Great Whites in Australian waters, with South Australia recording a 94% drop in numbers in the decade from 1980. Photograph courtesy Marcel Steinmeier.

Great White Sharks (Carcharodon carcharias) are large, warm-blooded marine predators. Their maximum length is listed at 6.4 metres, although larger specimens have been reported. They are long-lived, and slow-maturing (12-18 years for females, 8-10 years for males). They reproduce only every two or three years, producing between two and ten pups per litter.

Great Whites are found throughout temperate and sub-tropical regions in the northern and southern hemispheres. They are most frequently found off Southern Australia, South Africa, northern California and the north-eastern United States. In Australian waters the Great White Shark’s range extends primarily from southern Queensland, around the southern coastline and to the North West Cape in Western Australia.

There appears to be a long-term decline in the numbers of Great White Sharks in Australian waters. Globally, there has been a reported decline of between 60-95% in numbers in the last fifty years. In 2002 the Australian Government listed the Great White Shark within the Convention on Migratory Species (CMS). The listing was important in leading towards conservation and management agreements between the range states for this shark. In 2004 the Australian Government, in cooperation with the Government of Madagascar, successfully listed the Great White Shark on Appendix II of the Convention on International Trade in Endangered Species of Fauna and Flora (CITES). The listing aims to prevent the highly lucrative illegal trade in Great White Shark products such as teeth, jaws and fins. http://www.environment.gov.au/coasts/species/sharks/greatwhite/index.html

While there is still much public fear and misinformation about these predators, many people are working hard to present balanced views on the place of sharks in the ocean’s ecosystems. For some keen naturalists, getting the chance to safely come eye-to-eye with one of these powerful creatures is an opportunity not to be missed. Rod Hobson and Marcel Steinmeier describe their recent experiences viewing Great Whites with Rodney Fox Shark Expeditions in South Australia.

I recently achieved one of those milestones that we all set ourselves as keen natural historians; an Holy Grail as my herpetological buddy Steve Wilson puts it. From the 14-17th September I spent an unforgettable couple of days looking at Great White Sharks off the North Neptune Islands in South Australia. I was one of eight patrons on the “Princess 11” operated out of Port Lincoln by Rodney Fox Shark Expeditions. The eight of us were a mixed bag with the majority being purely divers. Only a visiting German diver Marcel Steinmeier, and I were true-blue animal freaks; but a merry company nevertheless especially as the Coopers flowed!

On our first morning outbound, the “Princess 11” was accompanied by large numbers of Great-winged Petrels with an occasional Yellow-nosed Albatross putting in an appearance. There might well have been other seabirds in the mix but we were buffeting a heavy sea and sharks were the objective; no time to dally over seabirds. I felt like an heretic, as I contented myself with the petrels and a vanguard of Common Dolpins (Delphinus delphis) on our bow.

On reaching the islands we moored in their lee in shelterd waters. These islands are home to large colonies of Australian Sea Lions (Neophoca cinerea). These are what attracts Great White Sharks to these waters. Within an half hour of anchoring the crew had lured in our first Great White using tuna offal suspended under a float. What a creature, and a moment that I’ll never forget. Awesome is a much abused word these days and I cringe when I hear it used so offhandedly but in some cases it’s an entirely appropriate adjective. Carcharodon carcharias is awesome. A remarkable animal, and this a moment that I’ll never forget.

Over the next two days we were to get great views of up to seven individual Great White Sharks including two large females over 4.5 metres in length. They are magnificent beasts especially when seen underwater and within a metre of your face mask. Fortunately there is a well constructed and strong ‘shark cage’ between you and the shark. I had two dives of 90 and 60 minutes each.

This is an unashamed plug for Rodney Fox Shark Expeditions. Their bread and butter is showing people one of the world’s greatest predators in its natural environment. And they know how to do it. The atmosphere on board is casual, the crew all very friendly and skilled and the food is exceptional, especially the fresh fish straight from ocean to plate in a couple of hours. And the beer is cold. What else do you need? Welcome aboard. 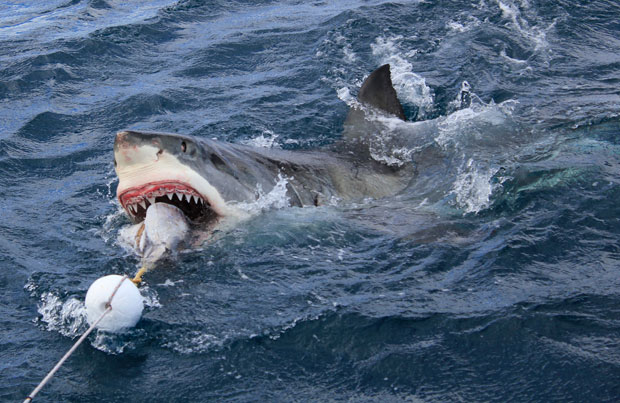 I have been interested in sharks for all my life. Since I have been diving I have been travelling the world to get to see these beautiful animals – Egypt, Maldives and various spots in Spain. When I booked the flight to Australia it was clear to me that I would have to take up the chance to go to Rodney Fox. And in my last week I finally made it. The boat and crew were great. The baits were already prepared and after five long hours we arrived at the Neptune Islands. The excitement was rising and after a short while there was the first white shark. Impressive! It took me the blink of an eye to prepare my camera and to put on the wetsuit.

The first dive was in the bottom cage. In my opinion the best way to watch them. Of course initially adrenaline was high! But then there was a really calm mood. The sharks were just there, surrounding the cage and watching you. They never seemed to be very aggressive and never attacked the cage. Andrew Fox and his crew did not try to make it as spectacular as possible. It is their goal to protect the sharks and to inform their guests about their way of life. There is no comparison to the pictures of cage diving that you know from South Africa. When you join a tour with Rodney Fox you can really learn a lot and spend a lot time in the cages. There is one at the surface that you can use all day long and the other one that will take you down to the bottom at least once a day. It is hard to describe what it feels like exactly.

White sharks do not even seem to make any efforts to get ahead. There is no hurry in their movements. They are elegant and majestic. I was just fascinated. It was a dream come true to be that close to an animal that survived millions of years in our oceans and now is one of the most endangered species because people are afraid of them and just do not know enough about them. I appreciate that there are people like Rodney and Andrew Fox who look after them. 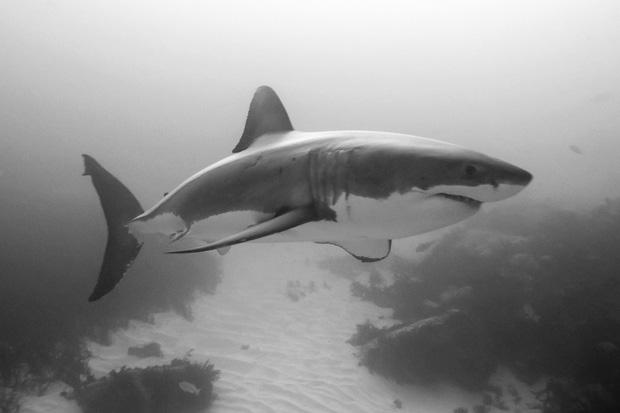 Much is still to be learned about Great White Sharks. In 2004, a female Great White Shark tagged in waters off South Africa traveled 20,000 kilometres to the coast of Australia and back again. Named Nicole, after actress Nicole Kidman, the shark changed long-held notions about how these animals moved through the world’s oceans. The journey was completed in just under nine months, the fastest return migration of any swimming marine organism known. Photograph courtesy Marcel Steinmeier.

Thanks To Rod Hobson and Marcel Steinmeier.