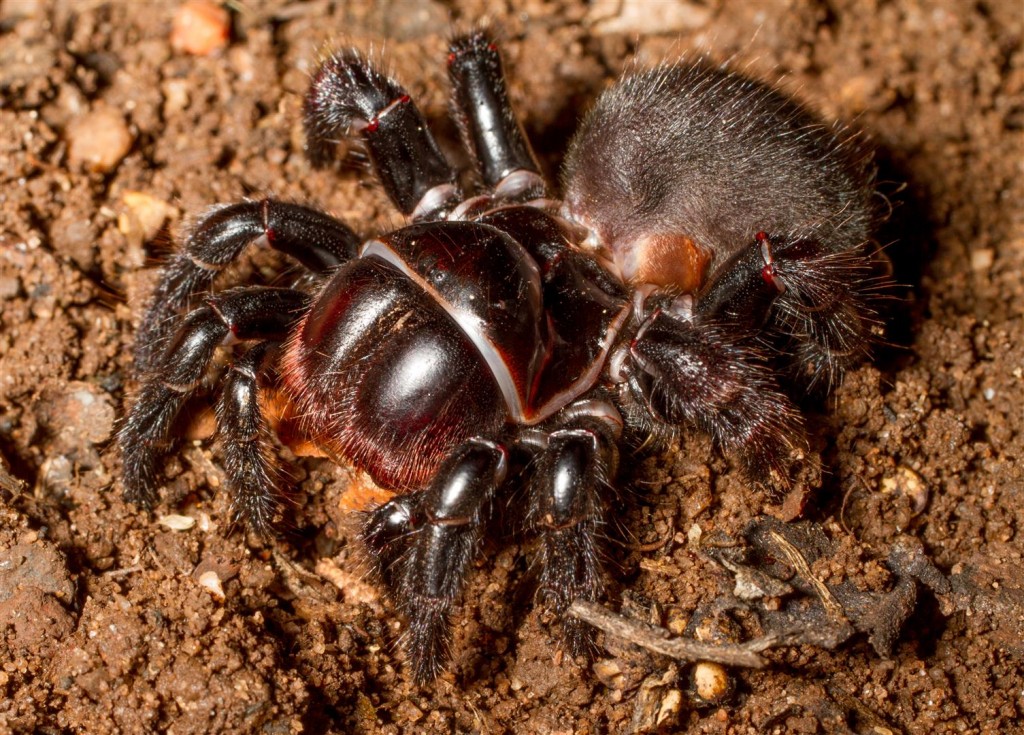 I recently had the opportunity to photograph this spectacular Red-headed Mouse Spider (Missulena occatoria), dropped off to the QPWS office from Oakey, on the Darling Downs in south-eastern Queensland. This spider was a female — the males have a deep red head and royal blue abdomen.

Mouse spiders are related to Funnelwebs and Trapdoor Spiders. They are all members of a ‘primitive’ group of spiders, from the Infraorder Mygalomorphae. These are among the largest and longest-lived spiders, and one of the oldest groups of spiders found in the fossil record. They have remained almost unchanged for tens of millions of years.

One of the things that is so special about macro photography is the wonderful detail in the resulting photograph that was often missed with eyes alone, especially when you’re reluctant to get your face too close to the subject! I love the fine red-hairs and the colours in the leg joints of this fabulous arachnid. 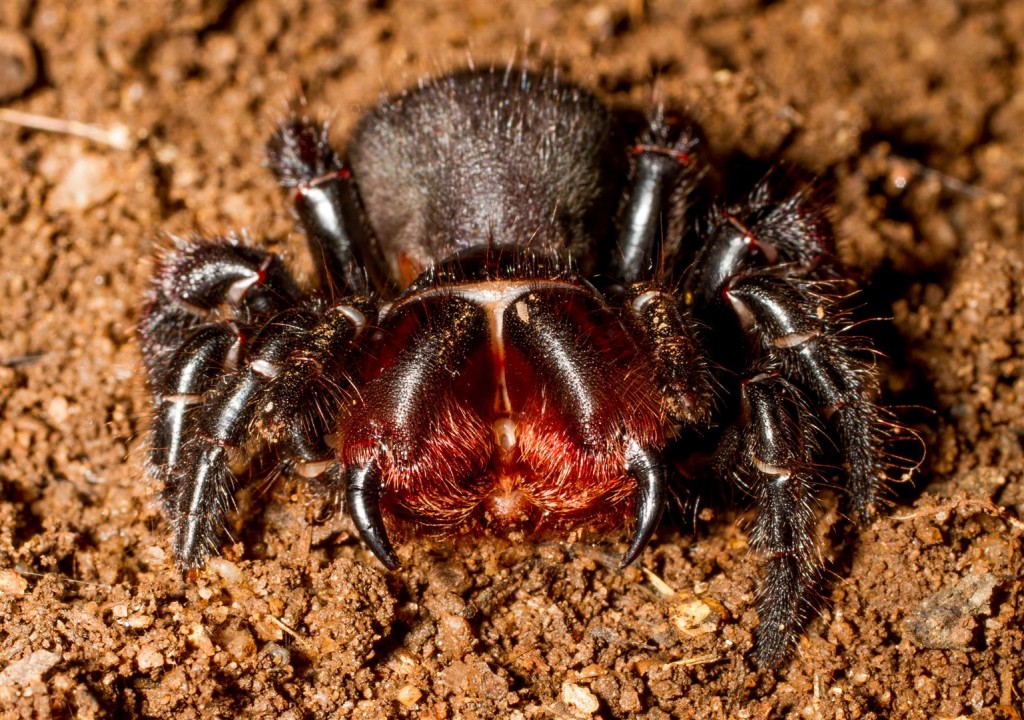 The Queensland Museum (QM) website is a great source of information on Queensland spiders. They report that three species of Mouse Spider have been recorded in Queensland:

Mouse Spiders are often confused with Funnelweb Spiders. There are differences in their morphology, although to see this might require a fair bit of care and courage if you’re not particularly enamored of our eight-legged wildlife (“Sit still, I need to see where your eyes are!”).

When viewed from the side, the head of the mouse spiders appears as a step, strongly divided into two levels by a nearly vertical drop from the front half of the head. The eight tiny eyes are spread across the front of the upper section behind the very prominent chelicerae. In funnel-web and all other trapdoor spiders the eyes are grouped together on a mound at the centre front of the head and the head is not strongly divided. — QM 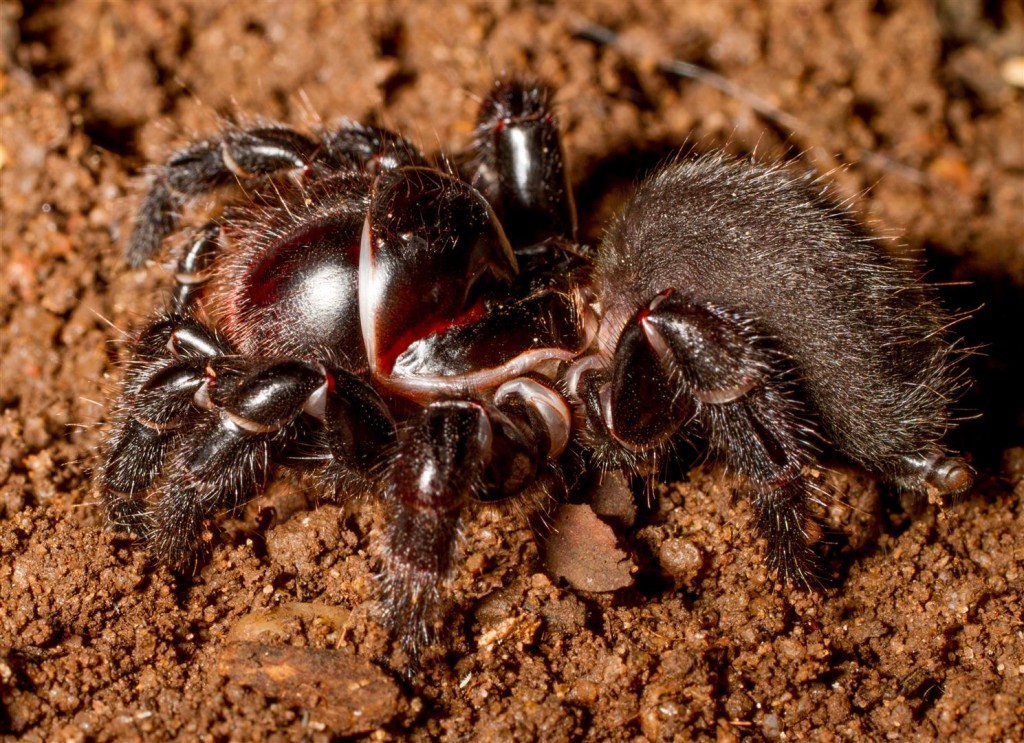 Mouse Spiders are apparently quite common in many Queensland suburbs,  but not often seen. From the QM website again:

The spiders are often found while gardens are being dug or soil turned over. Males wander from late Summer and tend to peak in April-May and often fall into suburban swimming pools whilst searching for females.

There is ongoing research into these spiders and just how venomous they are. A recent confirmed bite to a young girl from one of these spiders caused a severe reaction. However, the girl recovered after receiving Funnelweb antivenin. 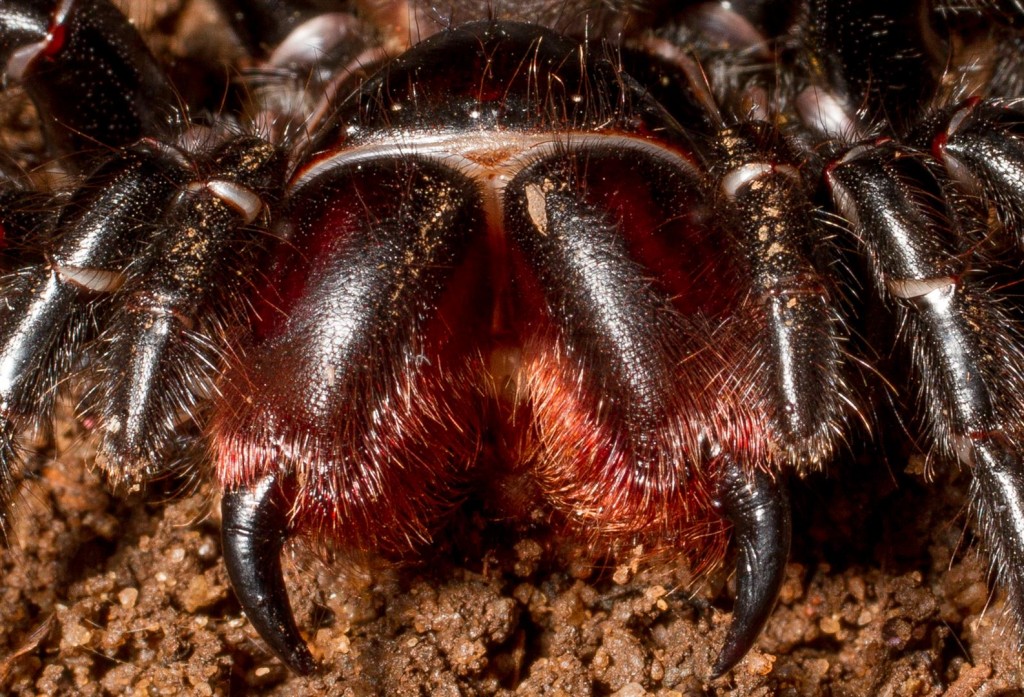 The Queensland Museum mentions the enigmatic nature of these spiders and what is known about their venomous nature.

The seriousness of the bite of Missulena was until recently the subject of serious disagreement. We had recorded several reports of uneventful bites from Missulena species both males and females. Two reports stand out. In one, a 7-year-old boy had a female Mouse spider attached bull-terrier style to his finger. The GP had to crush the spider to get the fangs out. The boy complained only of minor hunger pains as in the excitement, lunch had been missed!

The second case was of a paramedic whose earth basement was almost swarming with male Missulena bradleyi. He was bitten repeatedly by the males in his sleeves. The immediate pain soon passed and he had no problems until 36 hours later when a large infected area appeared on his arm. He applied an antibiotic powder and the wound healed and was barely noticeable when we saw it a week or so later.

The late Dr Struan Sutherland’s research showed that these spiders were potentially more toxic than Funnelwebs; thus, we were at odds. Inexplicably, the Gatton baby recovered quickly when given Funnelweb antivenom. Clearly, the Gatton bite was what Sutherland had predicted but why did some victims not react?

Dr David Wilson, then at the Department of Drug, Design & Development, University of Queensland looked at the question. When Funnelwebs disturbed, they quickly rise to the defence pose with a drop of venom on each fang tip. However, although Missulena also rises to the defence pose quickly, venom is rarely seen.

It seems that the Mouse Spider rarely needs or uses its much smaller reserve of venom; presumably most of the uneventful bites were dry, i.e., without venom. 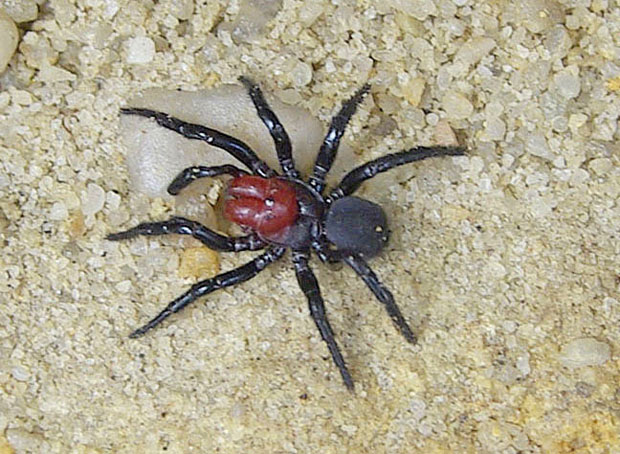