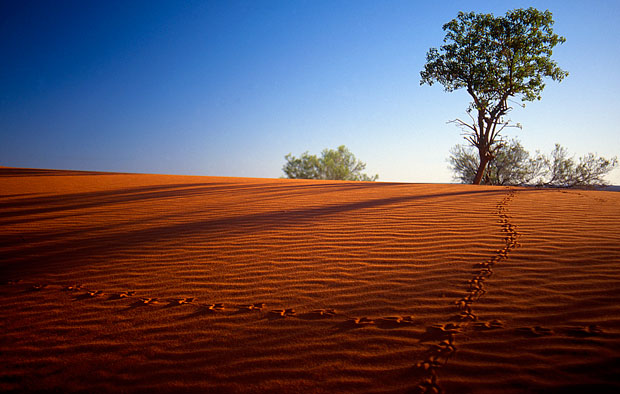 Tracks of night-movers. An early morning on the red sand dunes near Windorah.

Reproduction of text and images from a small article of mine recently published in the Spring 2012 edition of Wildlife Australia, the magazine of the Wildlife Preservation Society of Queensland.

We might have missed the wildlife but, with careful observation, we can tell who’s been there – and, possibly, which way they’ve gone, and how quickly.

Tracks — ephemeral trails in time — are always exciting to a naturalist. As windows into the lives of often elusive and shy animals, animal tracks open up an unseen world. They invite investigation and further detective work to figure out what wildlife has travelled the land before you. Along with scats and other markings, tracks bear witness not only to what animals have passed by, but what they did, where they went and more. Ground that others might not look at twice comes alive with a wealth of information. 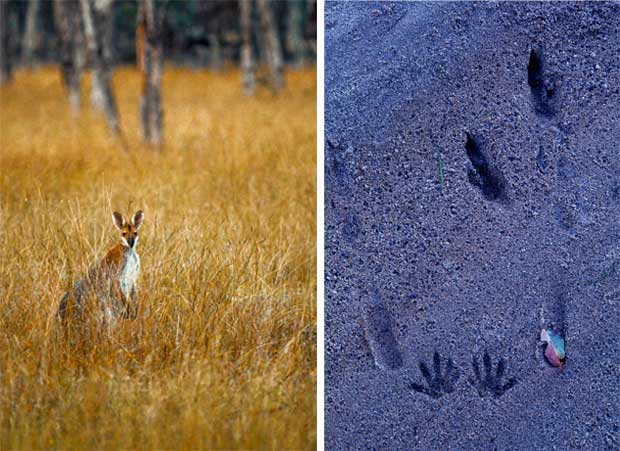 The closely-placed prints of the front and fore-limbs of a macropod, possibly a Red-necked Wallaby, in the bed of the Maranoa River at Mount Moffatt National Park show that it was not moving quickly.

Interpreting animal tracks has been, and still is, an essential life-skill for many people. Historically, animal tracking skills helped people find food, avoid dangerous predators and read the stories on the landscape. Indigenous Australians are masters in this field. My favourite description comes from Stanley Breeden, in his wonderful book Uluru: Looking after Uluru-Kata Tjuta — the Anangu Way. Breeden devotes an entire chapter to tracks and describes the exciting experience of exploring tracks and trails in the red sand with Anangu People.

The dense patterns of tracks I see in the sand everywhere are almost entirely made by small to tiny animals, their passages written in a fine handwriting. Luckily the sand is a perfect medium. The smallest toes and the lightest footfalls leave their marks.

For months now I have puzzled over these bewildering scrawls of hieroglyphics. A few I can identify … but most tracks are indecipherable. I need an interpreter, and there is none better than Edith Imantura Richards. To her the tracks are a clear text, an open book that she reads in great details and with a casual ease that comes from long practice. Reading tracks is routine to her but never dull. She enjoys telling interested people about the plants and animals, to share her knowledge with them.

Identification of wildlife tracks is employed today in wildlife research, conservation, and outdoor education. I’ve always found it extremely difficult. It’s hard to find ‘perfect’ tracks, and the surfaces on which the tracks are left make a lot of difference. The tracks by a particular animal will look different on different surfaces. The speed and gait of the animal varies the tracks and they are also affected by weathering.

Footprints are tracks, but not all tracks are footprints. These mysterious circular marks are found on the bark of eucalypts in wild places, as well as on the fences of towns like Toowoomba. They are made by the mouths of nocturnal molluscs, the native Red Triangle Slug, which grazes on wet nights on the algae that grows on those surfaces. 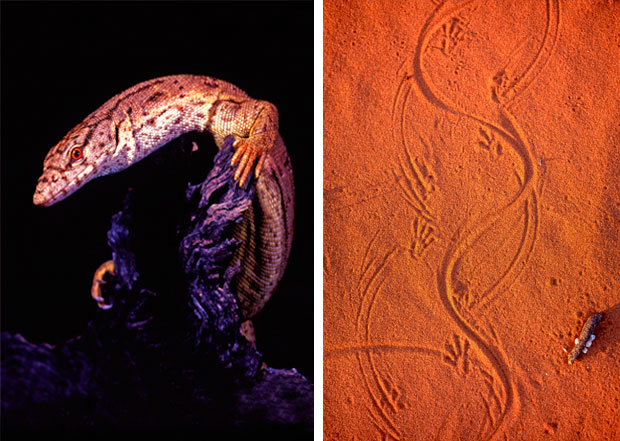 Goannas and other lizards leave distinctive tracks that include their feet and a tail-mark. Some goannas , such as the tree-loving, tiny and elusive Gillen’s Monitor (Varanus gilleni) are hard to spot, their presence perhaps best detected by marks in the sand.

The best places to find tracks are in locations with little vegetation and impressionable surfaces, such as sand or mud. The best times are generally early in the morning or late afternoon, as the oblique rays of the sun create shadows that make the tracks easier to see and to photograph.

Luckily these days we have several great guides to animal tracks and traces. For many years I carried A Field Guide to the Tracks and Traces of Australian Animals by R.G.B. Morrison, while today Barbara Triggs’ Tracks, Scats and Other Traces — a Field Guide to Australian Mammals is an essential book for any naturalist. Both Morrison and Triggs note that it is important to know something of the way that animals’ feet and limbs are constructed and how they move at different speeds — and both books give detailed descriptions of these factors.

Snakes, such as this Carpet Python at Arcadia Valley, leave unusual winding patterns on dusty roads and sand.

Some tracks left by birds. Migratory wader prints in the sands of Moreton Bay (left), wet footprints from a just-departed White-faced Heron at Carnarvon Gorge (middle), and the wing marks of a Superb Blue Fairy Wren on a dewy car windscreen (right).

I’ve collected quite a few photographs of animal tracks over the years, but have identified very few of them, at least to species level. There’s something fascinating about them from a photographer’s point of view, particularly when you enjoy photographing the patterns in nature. It’s the intriguing evidence of an animal you’ve just missed seeing, but are now aware is around you somewhere. The bush speaks to us in many ways. 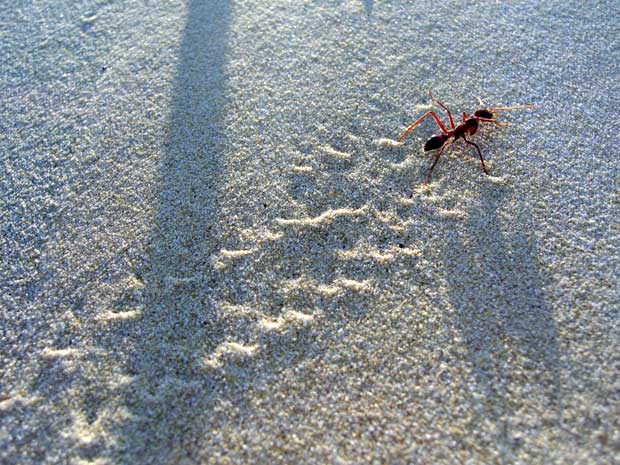 Insects also leave their mark. A Bulldog Ant struggles to cross the sands of a steep dune at Wooli.

Tracks on a beach near Bundaberg are evidence of a natural history event that has been played out here for millennia. At night, in summer, between November and February, turtles, such as this Loggerhead, lumber up beaches to dunes to lay eggs, before returning to the ocean. These strange and large tracks are quickly obliterated by the rising tide.

My favourite tracking experience was stumbling upon the fresh marks in the red sand of the Simpson Desert, soon after arriving on a trip there. I had not seen a thorny devil (Moloch horridus) at that stage, but was fairly sure that these parallel lines of small footprints might belong to one of these wonderful native dragons.

I followed the tracks into the setting sun and, sure enough, came across my first thorny devil making its way slowly but purposefully across the sand. Photographing it as it wandered along in the setting sun was a memorable experience, and a lasting reminder to me that the tracks of other creatures can be worth following. 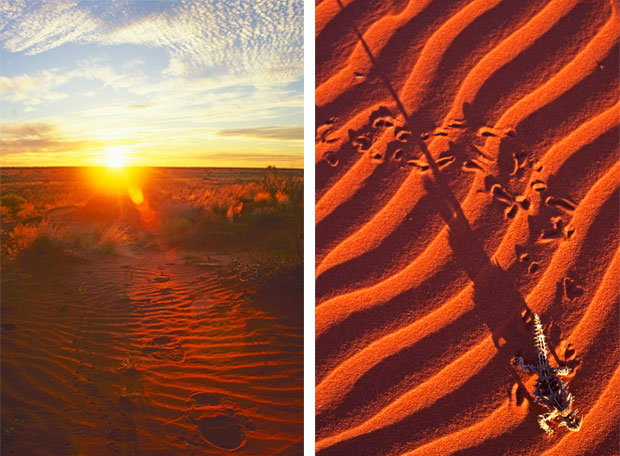 Following tracks can sometimes lead to the track-maker. My track marks and those of the Thorny Devil I eventually found, Simpson Desert, western Queensland. 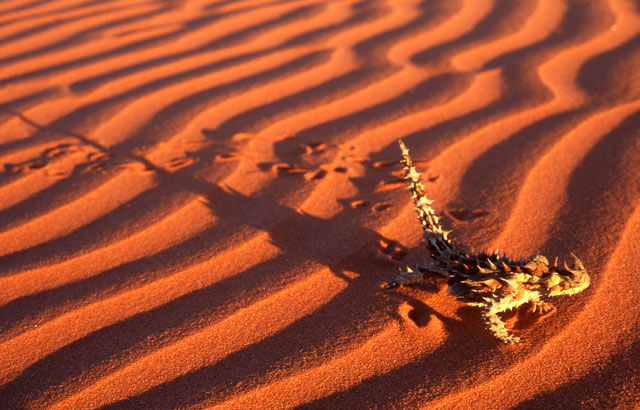 8 thoughts on “Tracks in the sand”