I’ve mentioned Steve Wilson in previous blog posts, but he probably never reads these posts so his ego won’t get any larger (a failing of many herpetologists and lots of naturalists, except me of course). 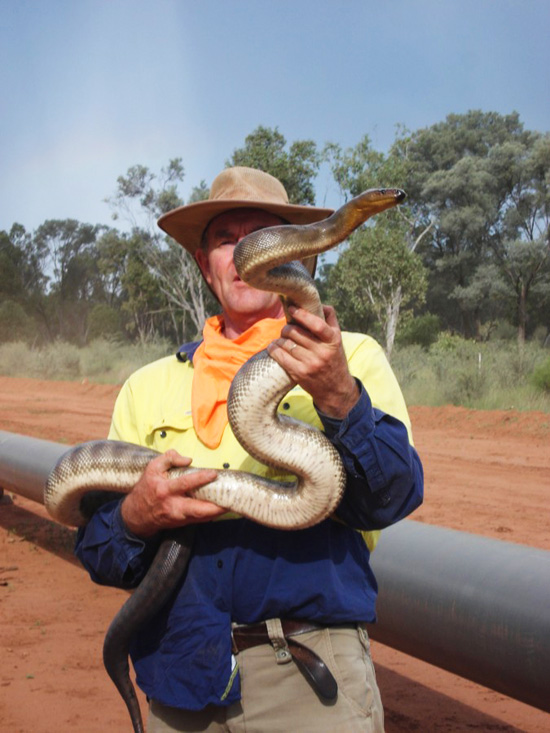 Steve’s been working out west, on and off since 2008, employed by gas companies to rescue animals that have fallen into the deep trenches built to take pipelines. It’s hard and dangerous work, with anything from enraged Eastern Brown Snakes to confused cows ending up in the trenches and having to be removed. The good side of it for Steve is getting to see some interesting reptiles. The image is of Steve with a Woma, one of Queensland’s larger and more uncommon pythons.

I haven’t asked Steve how many animals he and co-worker Gerry Swan have  pulled out of trenches, but it must be an enormous number. Between November 2008 and March 2009, a total 2,790 animals (comprising 96 species) were recorded from one trench alone. There were plenty of snakes in that list, with 323 individuals of 24 species recorded.

Steve provides data on the animals recorded to the Queensland Parks and Wildlife Service, for logging on the Agency’s Wildnet fauna mapping system.

I’ll see if I can talk Steve into a few words about his recent finds for a future post.