“I met Warren Zevon in Emerald,” said Martin Ambrose, Senior Ranger in the Queensland Parks and Wildlife Service, as we drove along some dodgy road near Injune. Tracks from the classic 1978 Zevon album Excitable Boy had been blasting out of the speakers for a quite a few kilometres.

I’d discovered that Ambrose and I shared an appreciation of the music of the late Zevon, but this was a bit hard to believe. Zevon, the hard-rocking American singer-songwriter, known for his sardonic humour, brilliant musicianship, wonderful song-writing and heavy partying, hanging out in central Queensland? “I require evidence,” was my response. It appeared a few days later, in the form of this great photograph. 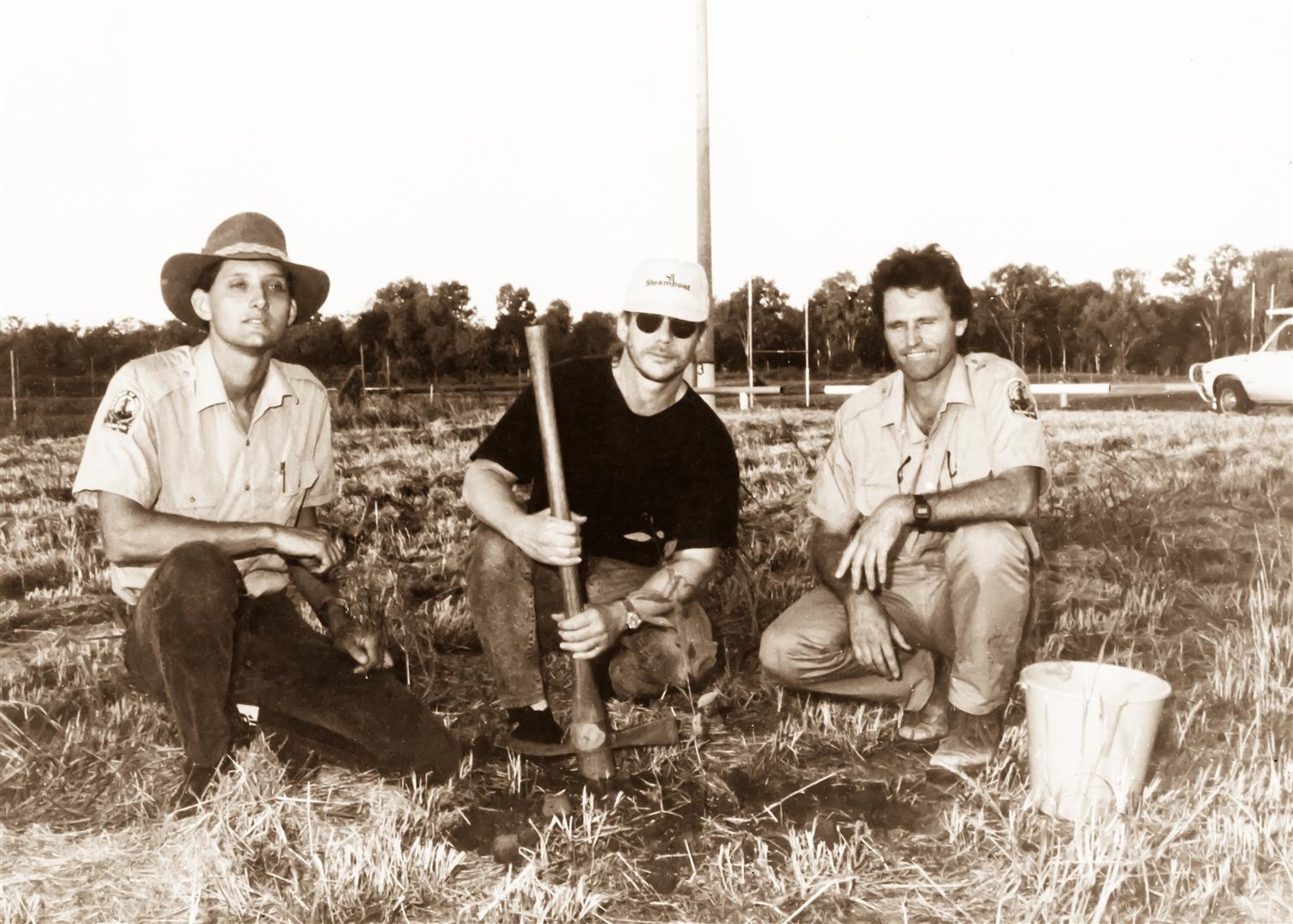 In his blog page on Zevon, ‘Nu Country guru’ Dave Dawson states, “When Chicago-born singer-songwriter Warren Zevon first toured Australia with (well-known Aussie outfit) The Little River Band in 1990 he soaked up Aussie culture from the shade of the Hilton circuit.”

Zevon played 23 gigs that year in a tour that visited Melbourne, Sydney, Adelaide and Perth. Tour lists do not mention that Zevon had briefly ventured off the coastal strip, accompanying The Little River Band when they visited Emerald to play at a charity concert following the big flood of that year. Zevon played two songs at the concert, which was held at the football grounds.

Martin relates how Zevon had earlier in the day planted a tree in the car park — a temporary location for the publicity photo shoot with the Queensland Forestry Department (who Martin then worked for) and Central Queensland News. “Forestry was seeking coverage for the Natureline, a corridor of trees being planted around the town of Emerald to reduce spray drift from cotton spraying around the margins of town. Fred Wild, aka Mr Natureline, got all sorts of famous people to plant trees to publicise the scheme.”

Says Martin, “Warren Zevon will be ten years dead on 7 September 2013. I would like to remember Warren by celebrating his significant contribution to conservation in Queensland.

The fuzzy box tree that he planted in the football ground car park in Emerald in 1990 was later unceremoniously translocated to the back yard of the Central Queensland News journalist Fred Wild, where it grew into a tree affectionately and widely known as ‘Warren’.

In the five years I was in Emerald, ‘Warren’ grew quickly to about four metres in height. The tree flowered and sheltered a fire ring that hosted many camp oven roasts. Under that tree, in a similar fashion to that ghost gum at Barcaldine, a range of well, and lesser-known ‘conservationists’ consumed roast lamb and red wine, while plotting strategies, drowning sorrows and celebrating small wins with contemporary issues in Central Queensland, including land clearing, tree plantings and land being declared as new national parks and wildlife refuges.

The Excitable Boy from New York and his little fuzzy box seedling unwittingly created a regular congregation of dedicated people who now have seniority in their respective careers across Australia.

I believe that ‘Warren’ eventually succumbed to clearing for redevelopment. However, the legend of the tree, and the man who planted it, lives on.”

Had any green Zevon anthems been forthcoming following his trip to the wilds of central Queensland? Almost. As Dave Dawson points out, Zevon indeed used his Aussie trip as inspiration for the title track of his eleventh album Mr Bad Example. No uplifting conservation theme here —  the song is a typical Zevon number, bristling with his trademark sardonic humour and caustic wit, a hilarious travelogue parody putting “shonky Aussie corporate crooks on the griller.”

And fourteen hours later I was down in Adelaide
Looking through the wanted ads sipping Fosters in the shade
I opened up an agency somewhere down the line
To hire aboriginals to work the opal mines
But I attached their wages and took a whopping cut
And whisked away their workman’s comp and pauperized the lot
I’m Mr Bad Example, intruder in the dirt
I like to have a good time, and I don’t care who gets hurt
I’m Mr Bad Example, take a look at me
I’ll live to be a hundred and go down in infamy

“Like no other singer-songwriter of his generation, Warren Zevon addressed murder, desperate passion, espionage, crippling loneliness, and f*ck-you excess with a lethal wit and confessional grace that remain unrivalled. When the singer-songwriter-pianist succumbed to lung cancer in 2003, the music world lost a truly original voice.” — Rhino Records.

“Now it’s ten year later, but he still keeps up the fight.” Martin Ambrose casts a watchful eye on the vast expanse of Barakula State Forest, still pondering the question he put to Zevon, who politely refused to answer — “Just what was the song Excitable Boy all about?” Photo R. Ashdown.

Thanks to Martin Ambrose for the story, Stratego battles and Zevon road-trip singalongs.