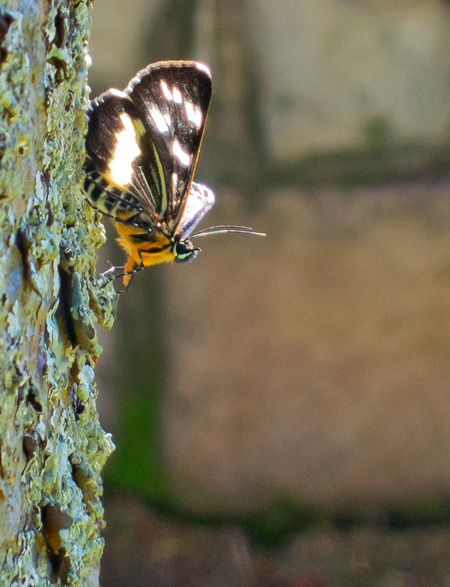 These colourful invertebrates (butterflies?) turned up for several weeks all over my suburb in Toowoomba in summer.

One of the frustrating things about being a naturalist is that you can spend ages messing about watching things, then more time trying to figure out what you’ve seen, then if you’re like me, forgetting to make notes because you’ve been distracted by something else, or annoying-but-necessary things like work get in the way, and soon you pretty much forget everything you found out about what it is you were interested in. But that’s life.

I have many posts to make about last summer, and it’s already mid-winter. This blog is so far behind that I wonder if it’s even worth pursuing. However, it’s become some kind of online diary (gee, what a novel idea), and I enjoy keeping it running, so I’ll attempt to keep doing these posts and they’ll be filled with the usual inaccuracies and dodgy information.

Summer 2012 was a wonderful season for wildlife, with rain and heat, and all sorts of things popped up and ran amok — a top time for a nature photographer.

So, back to February! A small, fluttering invertebrate turned up all over my suburb for several weeks. At first glance they could be mistaken for butterflies, but I’d figured that they were actually Day Moths — members of a group named for their habit of flying about during the day. Whenever I’d see these moths they’d be flying between several trees, as if they were relentlessly patrolling a small territory. I tried to get photos of this one for few weeks before finally succeeding. 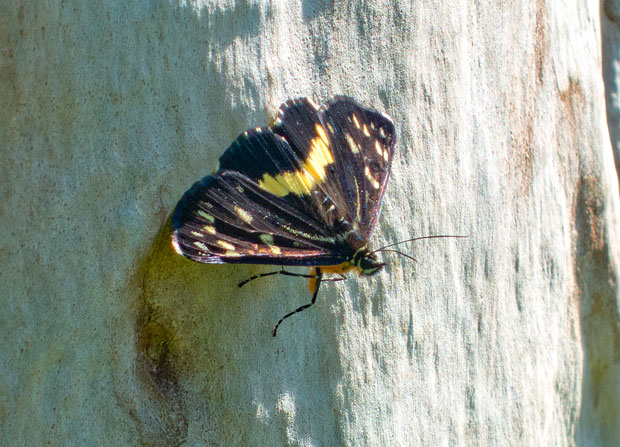 A Day Moth, resting on a Spotted Gum before heading over to a nearby Kauri Pine, Queens Park, Toowoomba. 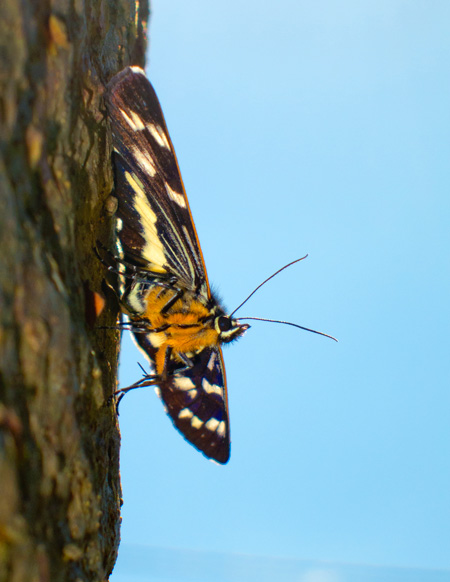 This Day Moth is colourful, with a bright orange under-belly, black stripes and distinctive wing patterns.

Trying to identify this moth to species level is a tricky task for an amateur like me. For an accurate answer I’d usually need to catch one, kill and preserve it carefully, then get it to a lepidopterist or entomologist at the Queensland Museum, and hope that they had time to examine it and identify it for me. However, I was happy to let the thing fly back and forward between two trees in the sunlight, and have a bash at identifying it to some vague level.

I reckon that this moth is a member of the family Noctuidae, sub-family Agaristinae. Australian moth expert I. F. B. Common notes that moths in the family Noctuidae come in a ‘limitless array of shapes, sizes and colours’. There are over 1,000 species of moth in this family in Australia and more than 35,000 world-wide.

Pushing on in a devil-may-care taxonomic style, I’d suggest that this is one of a genus of moths named Cruria, commonly known as  Crow Moths.

One species of Crow Moth that turns up to the east in Brisbane is Cruria donowani, and this one of mine looks close. A description of this moth appears on the excellent Insects and Spiders of the Brisbane Area website. Here, the moth’s habit of patrolling between trees in its home territory is described, as well as its defensive behaviour of opening its wings when startled to reveal a ‘cat’s face’ pattern on its wings, designed to frighten potential predators. It is believed that butterflies and moths with this sort of wing pattern form a Mullerian mimicry complex to avoid predators — the moth may, in its colours and patterns, mimic the crow butterfly, which is toxic to predators. 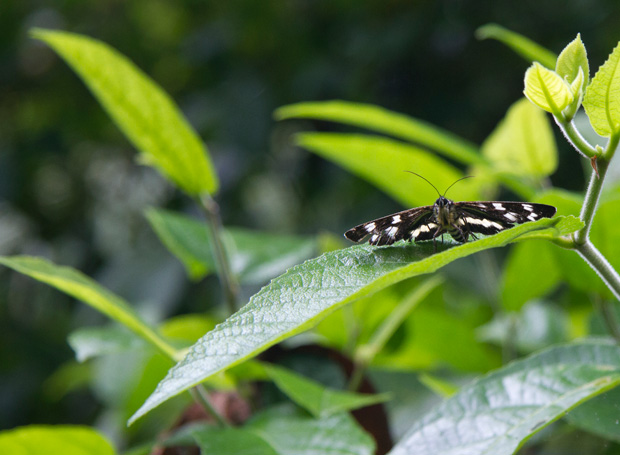 One month later, I was on a work assignment photographing World Heritage rainforest reserves in northern New South Wales. I ran into another Sun Moth, in a sunny clearing in rainforest, and had an amusing moment when the thing landed on the lens of my camera while I was trying to sneak up on it. Hard to get much closer to such a charming invertebrate.