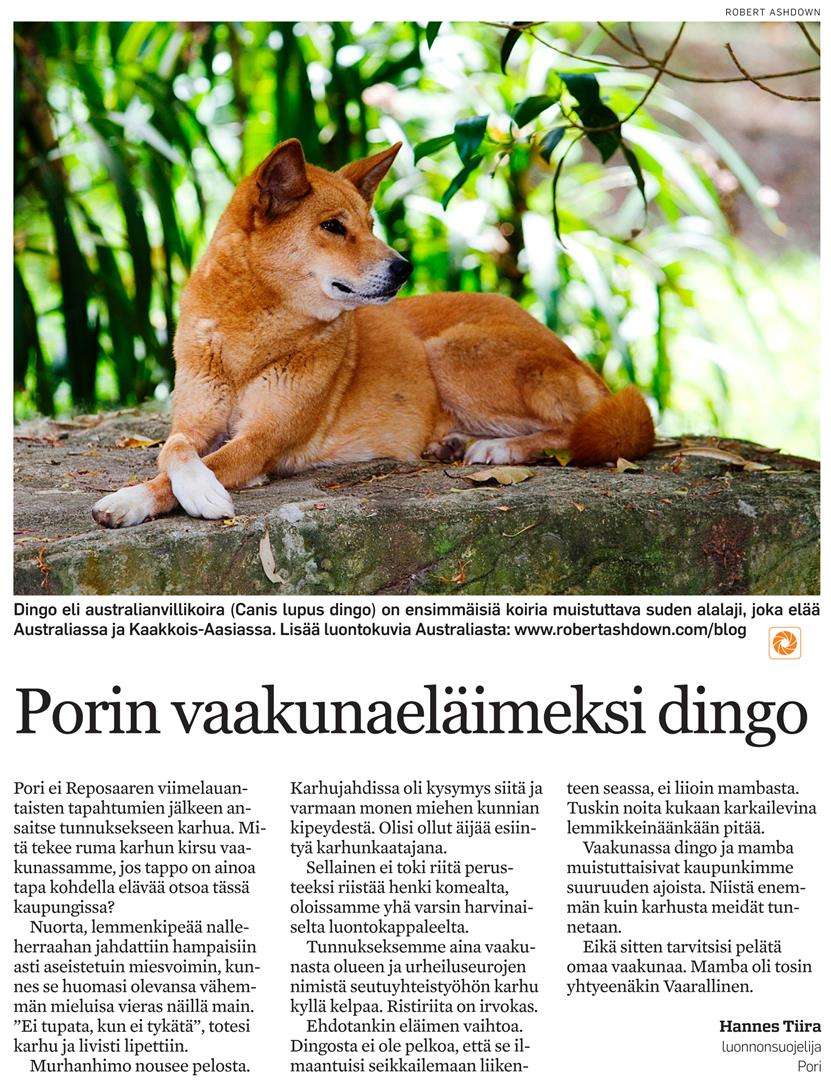 From the ‘letters to the editor’ section of the newspaper Satakunnan Kansa, from the town of Pori on the western coast of Finland. Photo R. Ashdown.

I’ve just had an image printed in a Finnish newspaper. What were they after? A photo of a dingo! Why? Read on …

I thought you might need an explanation concerning the use of your dingo photo.

I worked as a news reporter in the newspaper Satakunnan Kansa for nearly 30 years. My specialities in that work were nature, conservation of nature, fishing and hunting. Now I have been editing the readers’ letters for five years. I also do the layout for the two pages.

The “dingo case” started when a bear swum to one of the Pori harbours. The animal was very angry because of  the harbour’s fences. It tried to go through, but couldn’t do that, so it went back to the sea and swam away. The authorities decided that they would have to shoot the bear if it did not go back to the woods. So, they tracked the animal for a while with guns, but stopped when they couldn’t find it.

After all that the newspaper got a letter from a blind priest by the name of Hannes Tiira, who is a keen bird listener and conservationist. He wrote that the city of Pori, which has the bear in its coat of arms, did not deserve the bear as a symbol, as the city had mistreated the bear (I like this guy. His blog looks cool, but my Finnish is dismal —Rob).

He suggested that the dingo or mamba would be a better animal for Pori, because these animals don’t bother us. Why dingo or mamba? The explanation is that Pori is known for its rock bands Dingo and Mamba.

Dingo was the most popular rock band in Finland in the beginning of the 1980s. The composer and singer of the band (Neumann) was a sailor as a young boy and maybe he had seen the dingo. In the summer many fans were waiting outside to see them play, some even sleeping in the open. The album that I have sent you is the 5th from Dingo. I thought you’d like to hear what kind of music they played.

When I got the letter from Hannes Tiira, I thought that all our readers might not know what a dingo was. I found you on the Internet and saw that you had a dingo photo, so I contacted you  and you had the good will to send me the photo even though I could not pay you.

Google ‘Bears and Finland’ to see some absolutely stunning photographs of bears in … Finland! 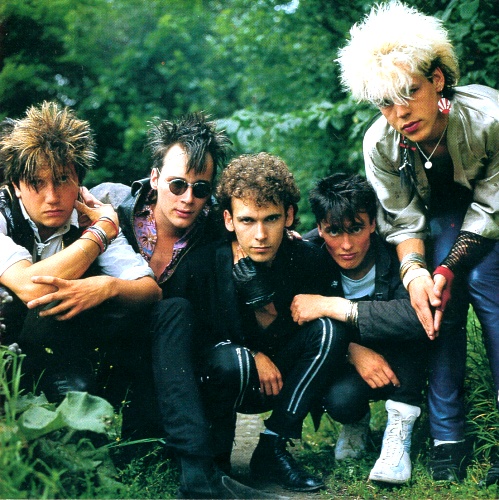 Dingo, the band. Let’s hope the rangers on K’Gari (Fraser Island) don’t have to deal with this lot! (Mind you, some of them have similar hair-styles).
“Dingo is a Finnish rock band formed around 1982 in Pori, Finland. They fused Finnish melancholy with catchy rock melodies, headed by the charismatic singer Neumann (a.k.a. Pertti Nieminen). Their first two albums, Nimeni on Dingo (1984) and Kerjäläisten valtakunta (1985) both sold over 100,000 copies in Finland and they caused mass hysteria among teenage girls as they were seen as the Finnish equivalent of Duran Duran. The hysteria took its toll as the band crashed and burned fast, splitting up in October 1986, after their third album Pyhä Klaani had failed to match the sales of its predecessors.” Bio from LastFM.

10 thoughts on “The bear, the dingo, the blind priest and a legendary Finnish rock band”