Each species of Australian raptor – our birds of prey – has a scientific name and an ‘official’ common name. Most of these wonderful birds have other names that reflect their prey or preferred habitat. There’s Fish Hawk for Osprey, Smoke Hawk for Spotted Harrier, Sparrow Hawk or Windhover for Nankeen Kestrel, Duck Hawk for Peregrine Falcon and Chicken Hawk for the Brown Goshawk. 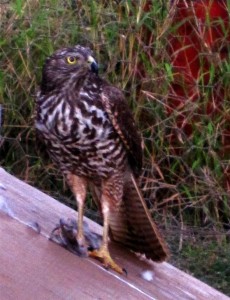 Brown Goshawks are one of my favourite birds. I’ve spent many days in years gone by in the scrub around Lota Creek, on the outskirts of Brisbane, just trying to catch a glimpse of them, and other raptors. Every sighting of these elusive birds is always a thrill, but without a hide you don’t get too close.

I was recently reminded of how the Brown Goshawk got its ‘other’ name, when I helped a friend, Raelene Neilson, get a juvenile goshawk out of her chicken coop. The young bird had become trapped after entering to catch a dove within. The chickens waited anxiously outside, a sensible move. We eventually managed to help the bird escape, without having to wrestle with it, not a prospect we (or the bird) would have enjoyed. It was great to see it leave unscathed. Raptor guru Penny Olsen notes that even though Brown Goshawks have been recorded as living to an age of 21 years in captivity, the majority of them die in the wild within their first year.

There are some things in life you can never get tired of – and Brown Goshawks definitely fall into that category.