While the impact of development on our coastal habitats is a topic constantly in the news, it’s sobering to be reminded that we are still finding out what species of plants and animals actually live in these fragile places. 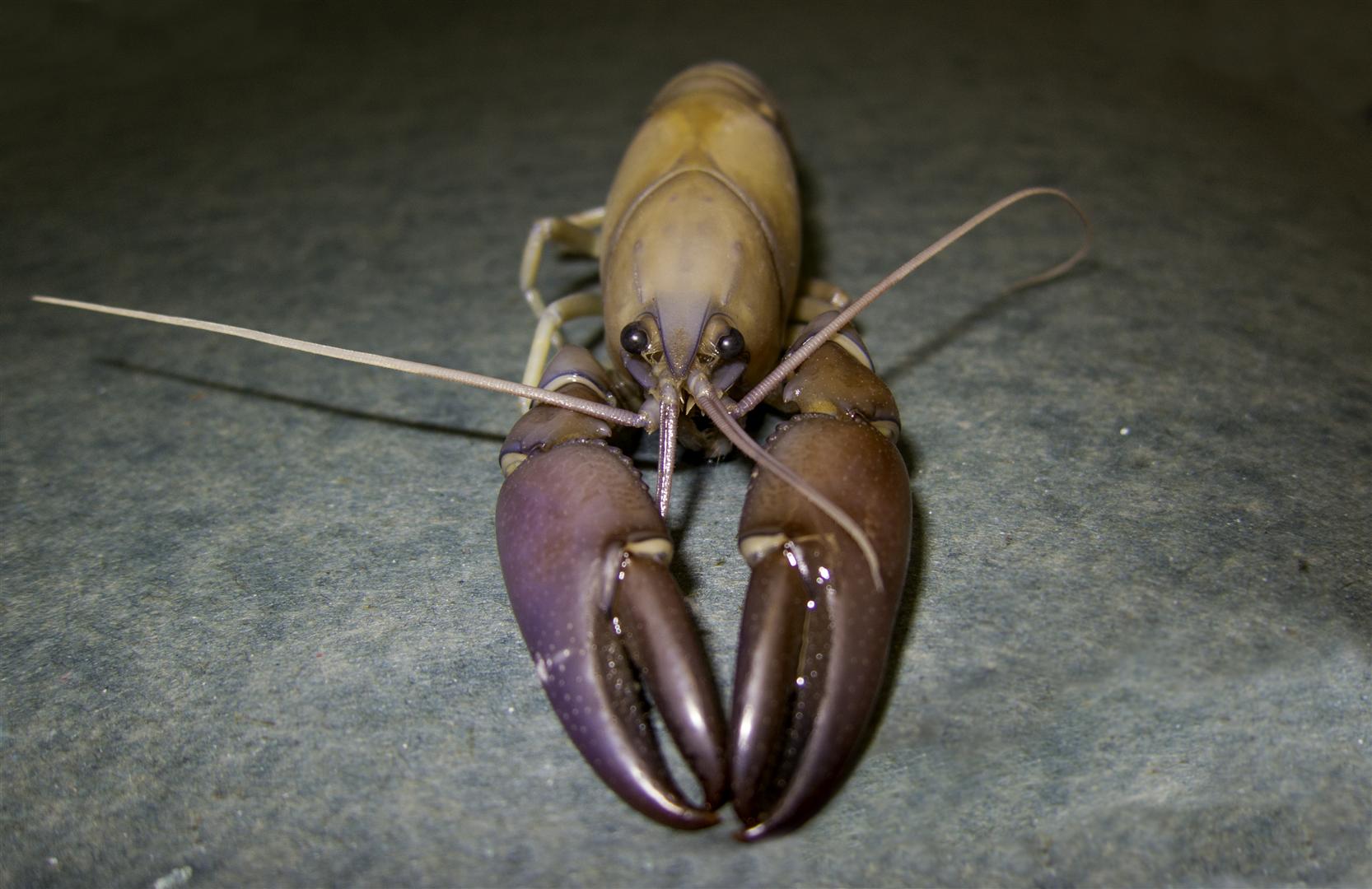 For zoologists, the discovery of a new species is always significant. It’s like finding another piece in the threatened and fragile jigsaw of life that surrounds us and on which we depend so much.

The Whitsunday Ngaro Sea Trail is a mix of seaways and picturesque walks across Whitsunday, South Molle and Hook islands. The walk leads through open forests, grasslands and rainforest, and includes climbs up rugged peaks and strolls along winding pathways.

Created by the Queensland Parks and Wildlife Service (QPWS), the walking tracks and other infrastructure associated with the Sea Trail were yet more ‘development’. So, before this project was completed, a careful analysis of any associated impacts was carried out, to make sure they’d be kept as small as possible. As a part of that process, new surveys of the fauna and flora of Whitsunday Island were completed.

In 2010, while undertaking one of these surveys, QPWS employees Rod Hobson and Richard Johnson discovered the remains of a freshwater crayfish Cherax sp. These were forwarded to crayfish researcher Jason Coughran for comment. Jason recognised these remains to be those of a yet undescribed species. A return trip was arranged to collect live specimens for description, which was duly accomplished later that year. During this trip a second species of freshwater crayfish was also found on the island. 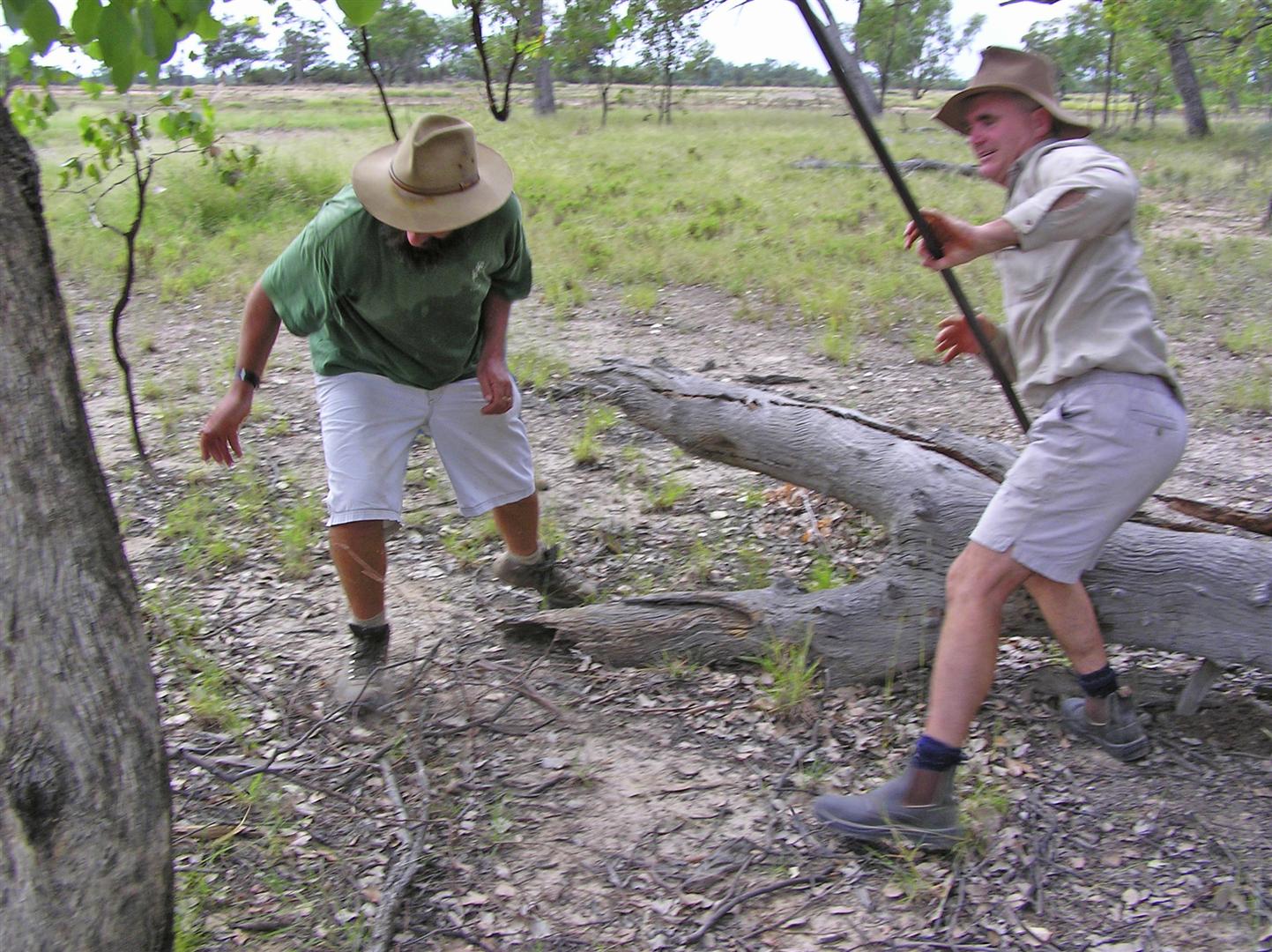 Rod Hobson and Richard Johnson in pursuit of an interesting reptile on a QPWS fauna survey, Yelarbon, 2006. Photo R. Ashdown. 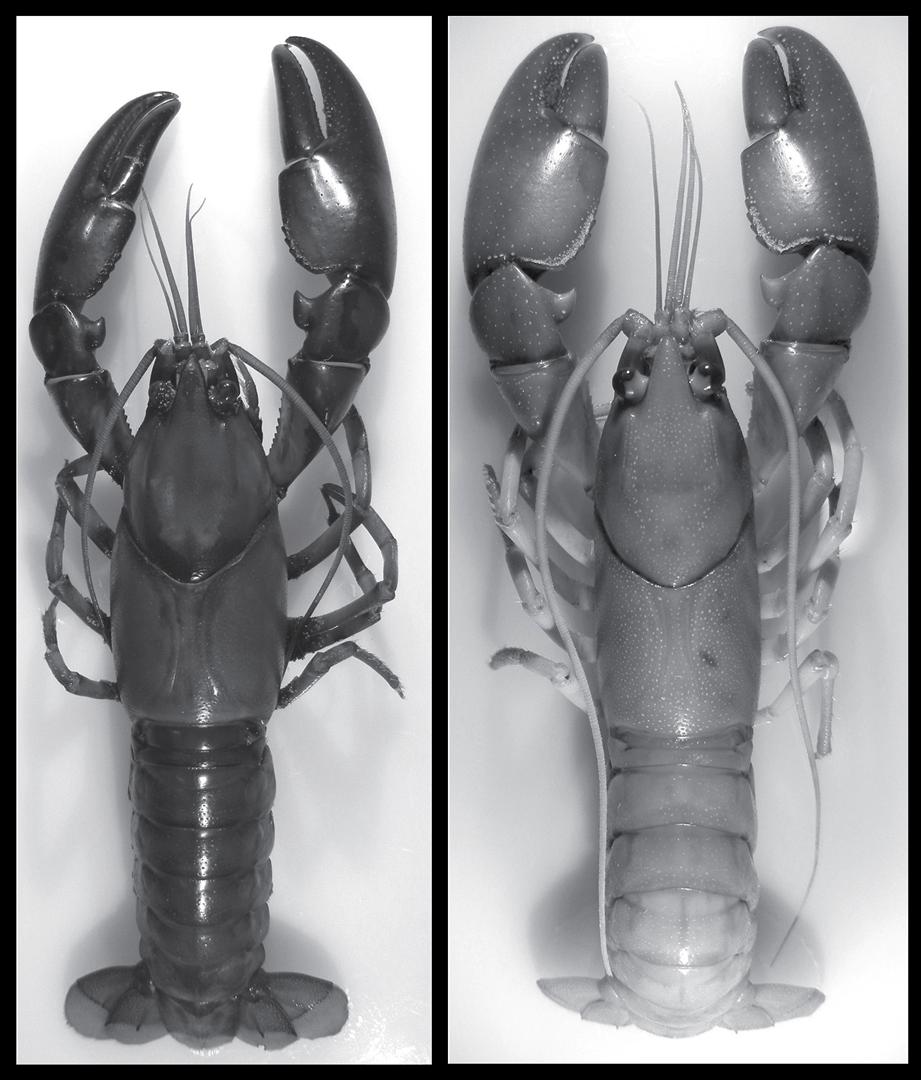 Cherax austini (left) and Cherax cid (right). These specimens are the holotypes of the two new species, stored permanently in the collections  of the Queensland Museum. The museum’s zoological collections represent the ever-growing and priceless database of Queensland’s faunal diversity. [A holotype is the actual physical specimen of an organism that was used when the species was officially described]. Photo courtesy Queensland Museum.

Freshwater crayfish, known variously as yabbies, lobbies, crawchies, craybobs, craydads, marron, gilgies and koonacs, are creatures well known across Australia. There are over a 100 species (family Parastacidae) in Australia, with more than 20 native to Queensland, including one of the smallest in the world (the Swamp Crayfish Tenuibranchiurus glypticus, which reaches about 25 mm in length — by contrast, the Giant Tasmanian Crayfish Astacopsis gouldii reaches up to about 4.5 kg in weight and is the world’s largest freshwater crayfish — see * below) 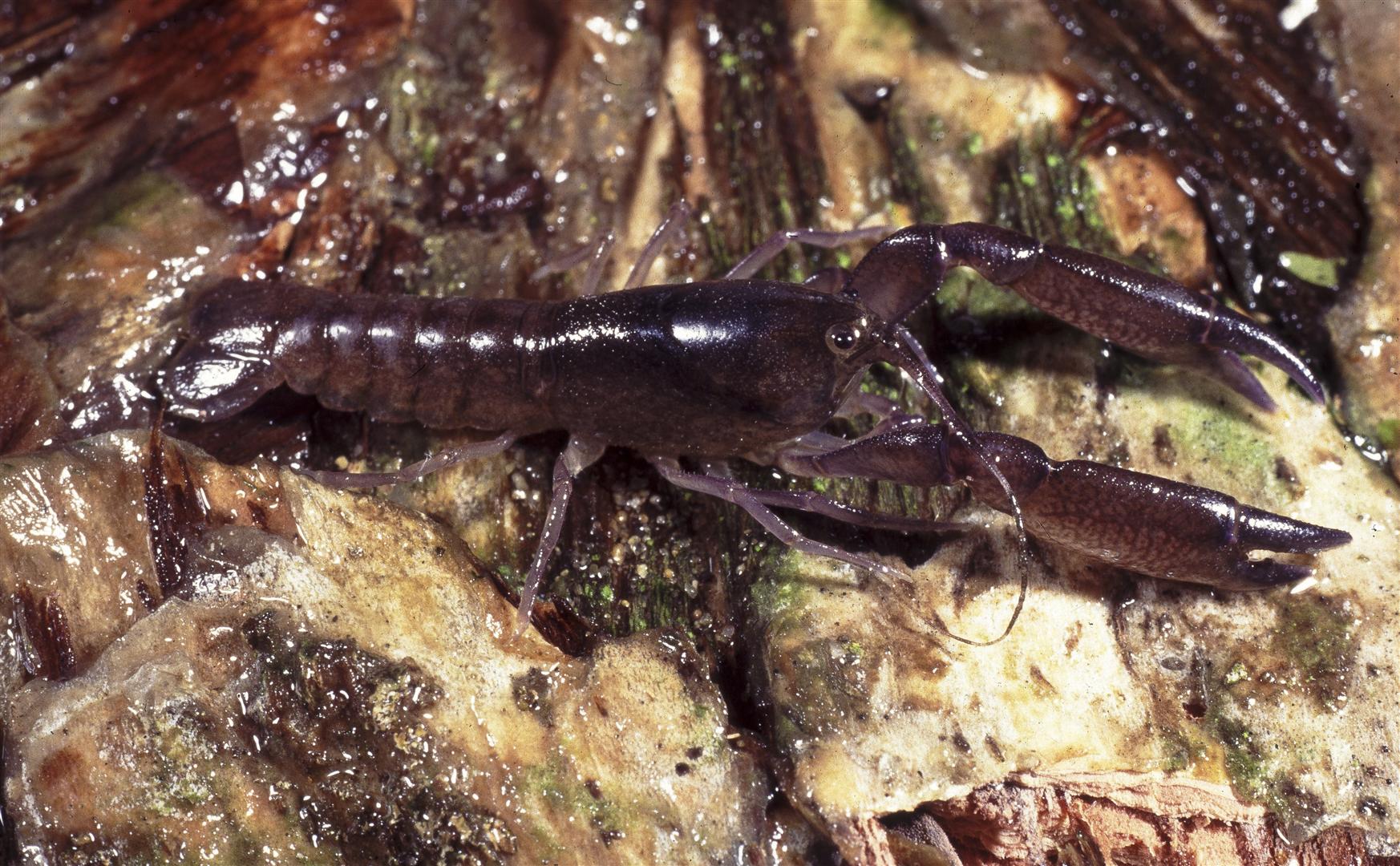 The Swamp Crayfish (Tenibranchiurus glypticus), at about 2.5 cm in length, is one of the world’s smallest freshwater crayfish. Thorneside, Brisbane. Photo R. Ashdown.

According to the authors of the paper on these two new Cherax species, there is no information on any other species of freshwater crayfish inhabiting islands this far north in the Coral Sea, apart from a single specimen of the Orange-fingered Yabby Cherax depressus collected at Lindemann Island about 12 km south of Whitsunday Island. The next closest island species is the Sand Yabby Cherax robustus, found on Fraser Island, about 700 km south. Interestingly, Cherax austini displays a feature (a median ridge on the cephalon) that is associated with crayfish in the extreme south-west of Western Australia (Coughran et al 2012).

The results of genetic work on the two new species, however, show that they are related to the mainland Cherax depressus group of yabbies, but as with island species of all types, they are busy evolving down their own divergent paths. 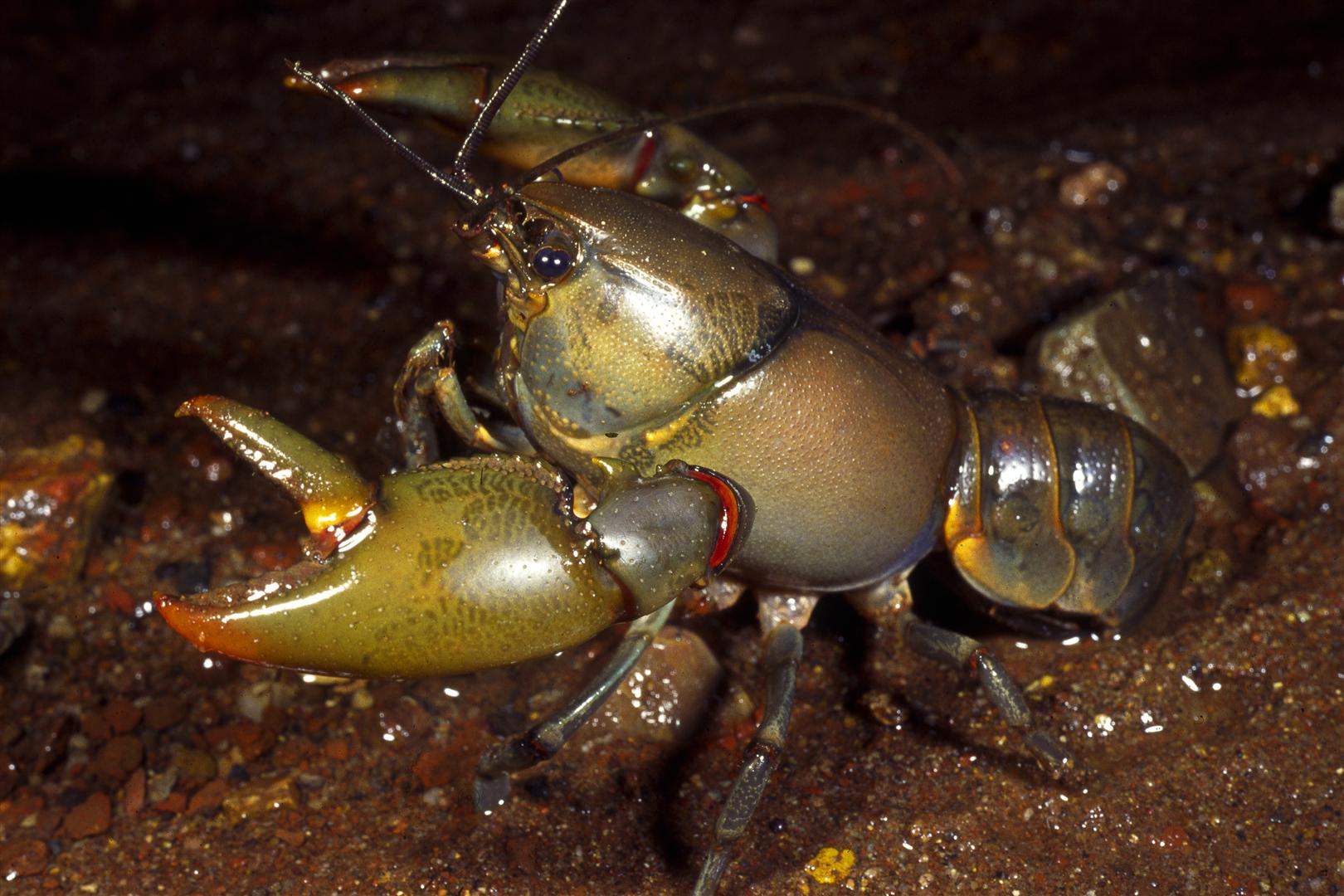 While probably confined to Whitsunday Island, the discovery of these two new species highlights the importance of continuing surveys on other Coral Sea Islands. There aren’t many suitable wetlands on Whitsunday Island, so checking out ephemeral wetlands and drainages on other islands in the group may just reveal further new creatures.

When species are restricted to islands, careful management is needed, as they are potentially vulnerable to various human-induced and naturally-occuring impacts. The value of national parks for protecting biodiversity is once again underlined. Cherax austini was discovered in a single Melaleuca (paperbark) swamp, a particular type of habitat that is classified as an “endangered” Regional Ecosystem. This particular location is one of only four protected areas of this habitat type in Queensland. The specimen was first detected as shell remains in midden formations around the shoreline of the swamp, probably from a predator such as an Eastern Water Rat.

Cherax cid was found in a small, clear flowing stream within notophyll vine forest, a type of coastal rainforest scrub. The specific type of Regional Ecosystem that this locality fell within is found only within six protected areas in Queensland.

The discovery of new species of such well-known creatures as yabbies is a pleasant surprise. It’s a find that once more increases our understanding of the the size and beauty of Australia’s biological diversity — our irreplaceable natural heritage. 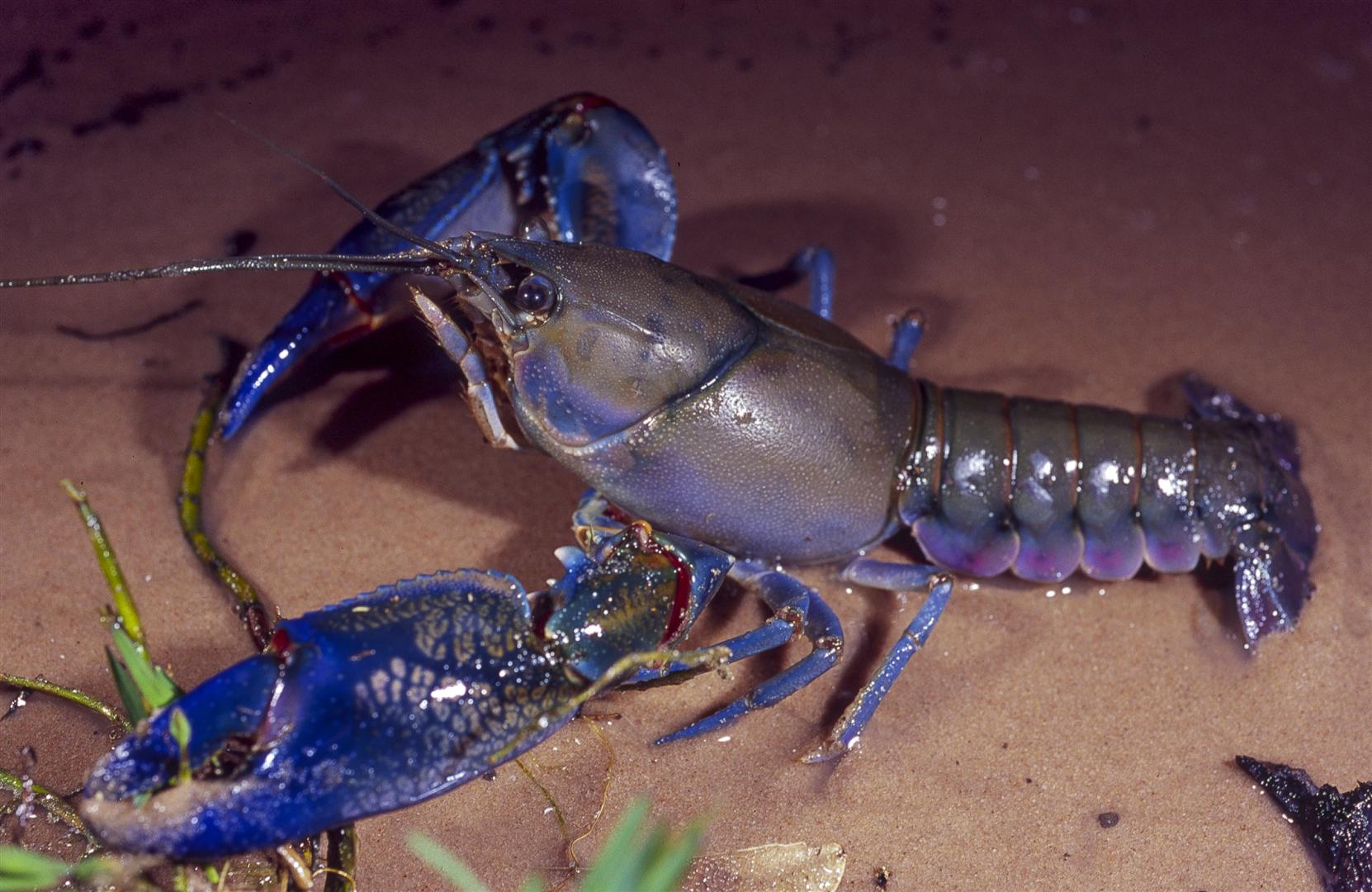 It has long been a matter of Aussie pride among those of us interested in our freshwater crayfish (from perspectives other than gastronomic) that we have both the largest and smallest freshwater yabby in the world. Whilst there is no argument whatsoever about our having the largest our contention that we also have the smallest is hotly contested by our friends from under The Star Spangled Banner. Our local contender is the Swamp Crayfish Tenuibranchiurus glypticus, which is a Wallum denizen of south-east Queensland reaching a grandiose length of 25 mm. South of the Mason-Dixon in the Deep South of the USA the flyweight belt is claimed by the Dwarf Crayfish Cambarellus diminutus. The Dwarf Crayfish is one of 17 species of freshwater crayfish of the family Cambaridae found in Mexico and the Gulf States of the USA. This family are all generally known en masse as dwarf crayfish, or more likely as crawdads or craybobs. Crawdad and craybob have also been absorbed into the Australian vernacular for our freshwater yabbies but are actually American terms. We owe a lot to The Beverly Hillbillies.

Cambarellus diminutus is a rare and threatened species known only from about 15 locations in Mobile County, Alabama and Jackson and George Counties in Mississippi. This crawdad also reaches an upper length of 25 mm so it’s actually a photofinish for the title of the world’s smallest crayfish. It’s a tie and we cannot, in all fairness, claim our crustacean, as the world’s smallest yabby. We still, however have a “no contest” for the world’s largest in the Tasmanian Giant Crayfish Astacopsis gouldi tipping the scales at 5 kilograms wringing wet and attaining a length of 80 cms. In fact not only is Astacopsis the world’s largest freshwater crayfish it is actually the world’s largest freshwater invertebrate. Let’s see someone beat that one!