Jaunty cocked tail, iridescent blue plumage and boldness in adapting to urbanisation, parks and gardens have made the Superb Fairy-wren one of the most popular and familiar of Australia’s birds. Reader’s Digest Complete Book of Australian Birds 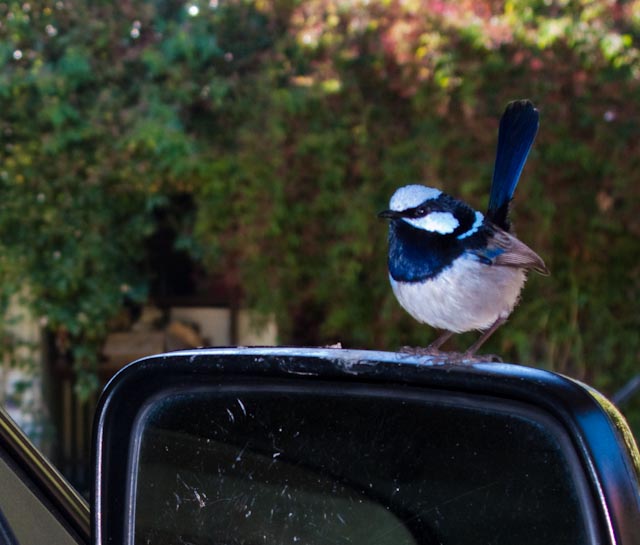 My suburb is not a great place for wildlife, compared to other places I have lived. Still, it’s not far to the bush, and some wonderful things travel through, including Grey Goshawks, Peregrines, Golden Whistlers and Satin Bower Birds. The resident wildlife of our small backyard is always entertaining. As winter is left behind the first Blue-tongued Lizards appear, and the most wonderful of backyard birds – Superb Fairy-wrens, are seen and heard through the day.

We have had a pair of these birds nesting in our yard, or the neighbour’s, since we moved to this town. As I walk Toowoomba I often hear the reeling call of a male bird announcing its territory. The fact that these delicate birds can survive life in the suburbs never fails to amaze me.

Lately, the resident pair of wrens has been constantly visiting our blue car’s rear-view mirror and windows. The birds breed from August onwards, so I imagine that the male is aggressively defending his territory against perceived invaders – the female always accompanies him to chase her own reflection. 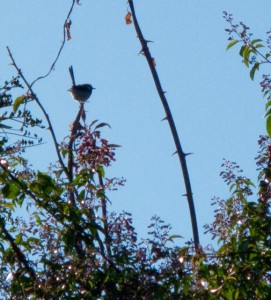 Up early – the male calls loudly from the Bouganvillea on the shed.

I set up a compact camera on a tripod next to the rear-view mirror and trip the shutter with a hand-held remote – it takes a bit of practice. The birds arrive and flit about while I frantically stab at the remote button. At one stage they perch on the camera and peer into the lens while I jump up and down and try to get the flash to fire. The neighbours think I’m a nut.

One morning my son, recovering from the flu, joins me to sit in the backyard – clutching the remote control and peering at the car, when my wife calls to say that the birds are …  in the house. For the first time ever, the male has entered the kitchen and is perched on a blue-coloured decorative acoustic mosque ball – what a photo opportunity! The camera? It’s next to the car, of course – I stand back and he flits out. We laughed a lot about that, it was as if the bird was thumbing its beak at us. These tiny birds have been a delight, and capturing their antics has been a lot of fun – and tested the family’s patience as I traipse in most mornings grumbling about dodgy photos. Nonetheless,  a few shots worked out – here are some. Long may they mess up the car’s glass. 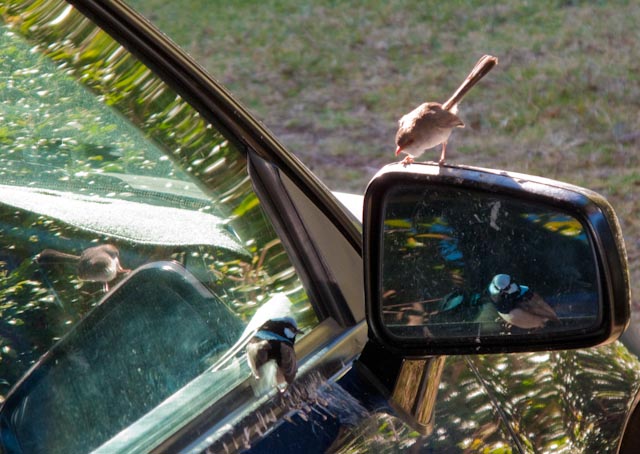 Female scolds male for his vanity … 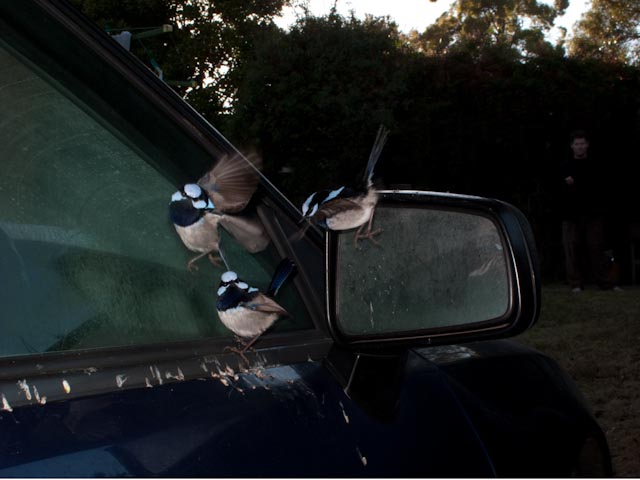 The sun’s barely up – the windows are all frosty – how frustrating for a bird! (Three images merged). 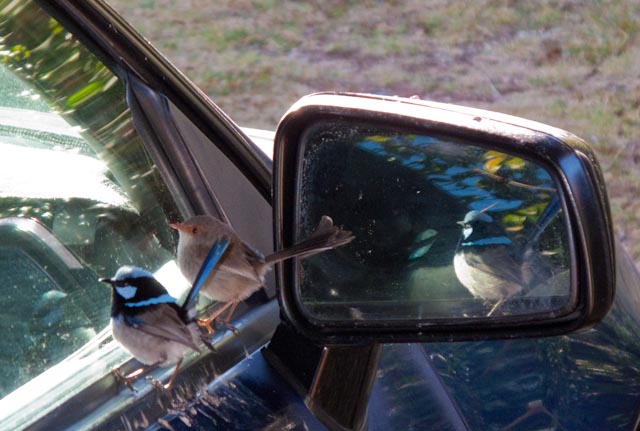 … but soon joins him at the glass. 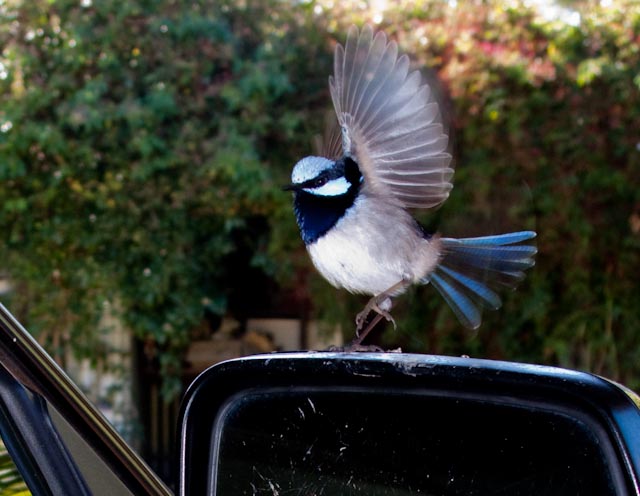 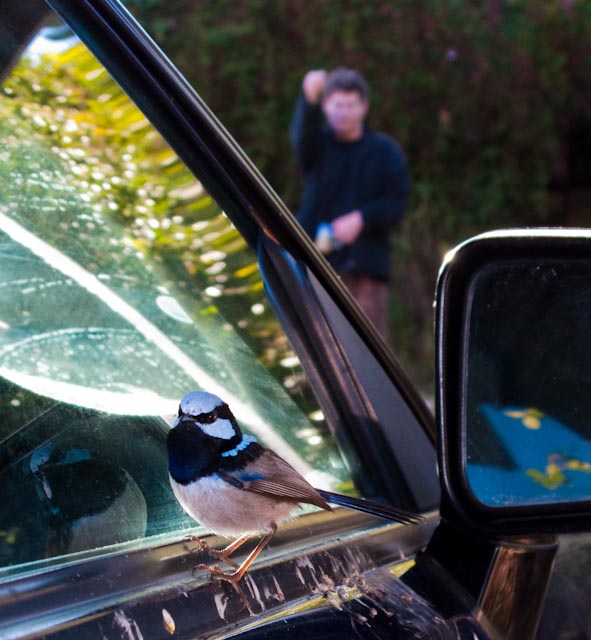 Using a remote control to fire the camera. 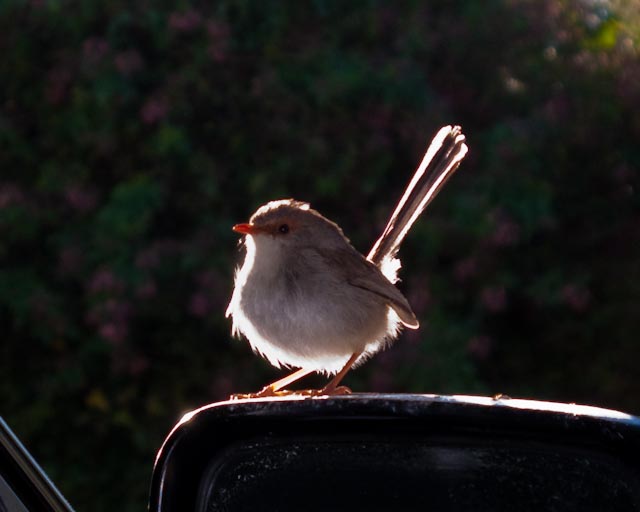 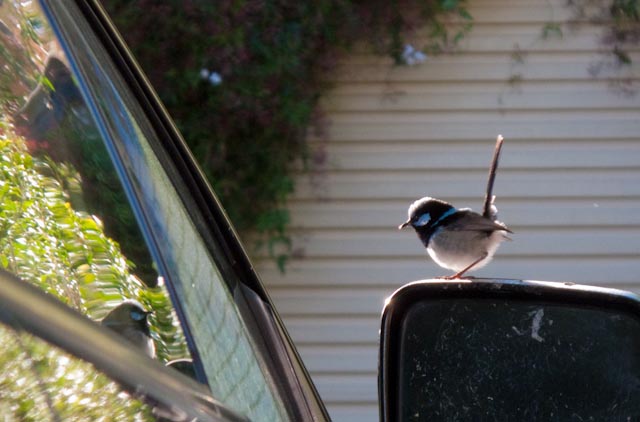 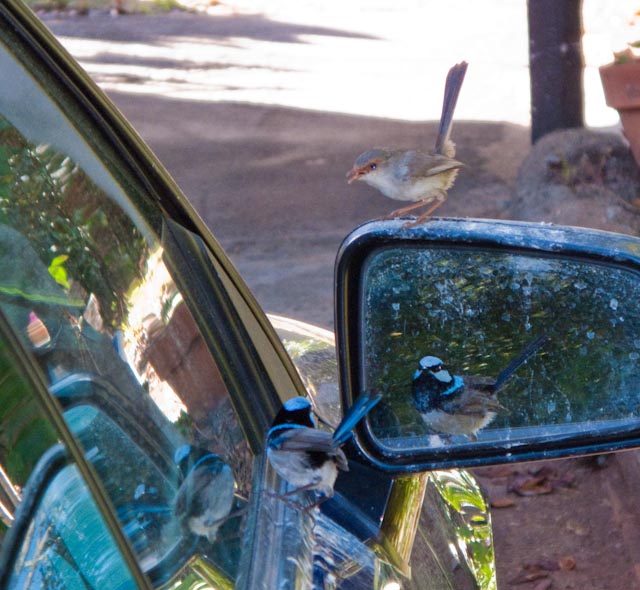 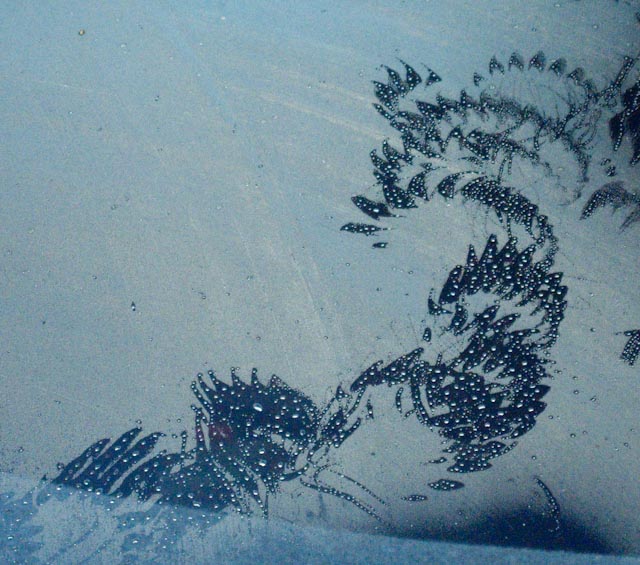 Delicate feather marks on a misty windscreen – what better car ornaments could you have?