The fluorescent nature of scorpions under ultraviolet light is well-known, most recently being featured in David Attenborough’s Life in the Undergrowth. Fluorescent chemicals in the cuticle* of the scorpion absorb ultraviolet light and reflect back a visible greenish light. 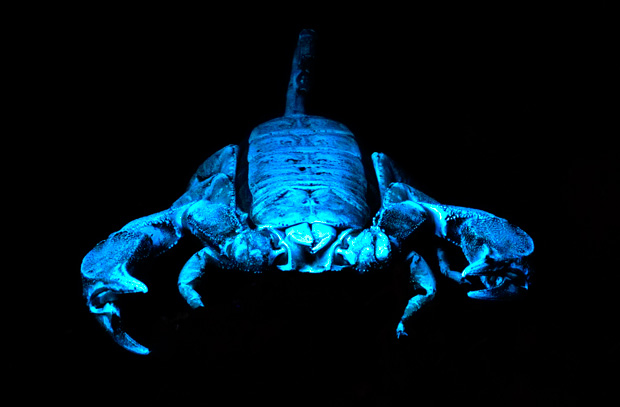 I’d been wanting to photograph one ‘glowing’ for a while, so when friends Raelene and Kim captured one trying to get into their house, my chance arrived (having been reminded by Kim of this feature of the animal). I borrowed the scorpion and some UV lights from Kim (fellow torch and gadget enthusiast) and Harry and I set up some lights and camera gear on a desk at home. It was a warm night so the scorpion was very active, and given their 360° vision some patience and careful coaxing was required in order to get the animal to sit still long enough for an exposure of several seconds. 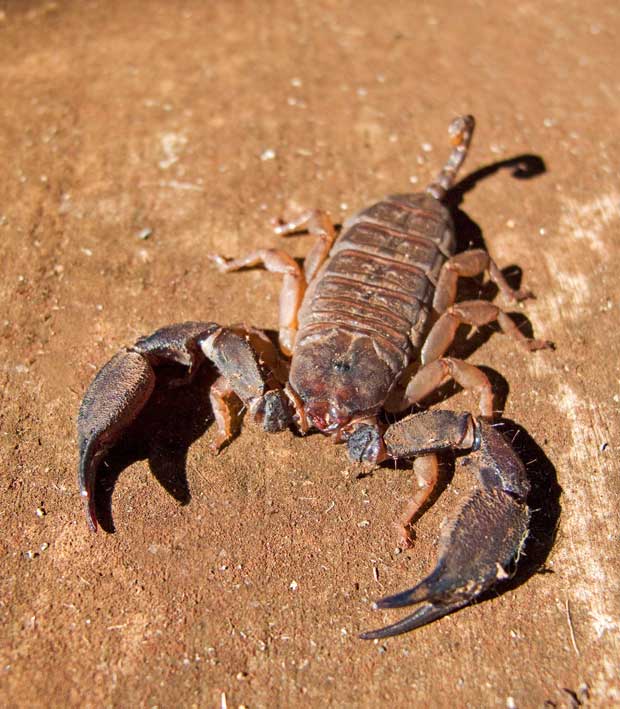 A Black Rock Scorpion as it appears in ‘normal’ light. One of more than 43 described species of scorpion in Australia, none of which are deadly. In south-eastern Queensland scorpions are secretive animals with mild stings. Photograph Robert Ashdown.

Scorpions can apparently see the ultraviolet part of the spectrum that we cannot. Does the fact that their exoskeletons glow in ultraviolet light have some function for them, or is it just an incidental feature of scorpion chitin? David Attenborough, in Life in the Undergrowth, notes that since it is thought that a scorpion’s eyes can detect  fluorescence at night, perhaps the glow helps them locate mates or rivals. There has been continuing research and debate, into whether the fluorescence serves any purpose for scorpions. In a recent online discussion  Tim Flannery notes:

Professor Parks is an expert in this field, and he has conducted research showing that scorpion fluorescence is not very efficient. He also doubts that scorpion eyes function well in dim light, though here the data is less conclusive. If Professor Parks is correct, scorpions cannot detect their own fluorescence, which begs the question why scorpions fluoresce at all. Could it be a warning to potential predators with better night vision? Or is it an evolutionary oddity with no function at all? We are still learning the most astonishing things about animal communication, which leads me to wonder whether the mystery of the fluorescing scorpion is a tale for which the scientific world is not yet sufficiently prepared.

* Cuticle: a multilayered, extracellular, external body covering, usually composed of fibrous molecules such as chitin or collagen, and sometimes strengthened by the deposition of minerals such as calcium carbonate. 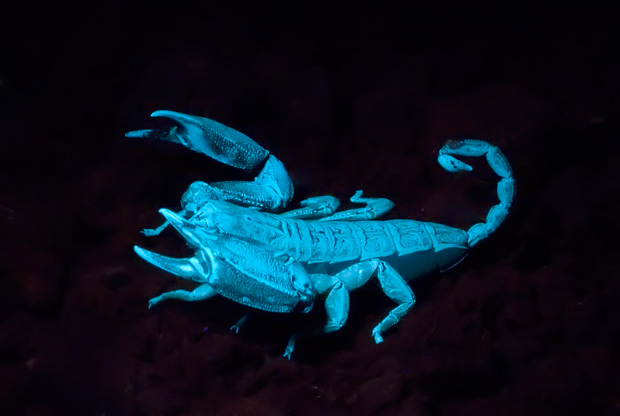 Scorpions are marvelous creatures with a long and fascinating history — they were almost certainly the first animals of any kind to become completely terrestrial. They have up to six pairs of simple eyes distributed around their carapace, as well as a larger pair close to its back margin (it is hard to sneak up on them.) Their eyes can deal with direct sunlight as granules of pigment move over the surface of the eye, forming a screen when things get too bright. Photograph Robert and Harry Ashdown.