Cockroaches and scorpions — two pretty tough arthropods, protected from all comers by their tough exoskeletons.

A ‘teneral’  cockroach (possibly a native Wood Cockroach Panesthia sp.) — ready to grow after shedding its old exoskeleton in a process known as ecdysis. Photograph by Kim Anderson.

But not always. As they grow they periodically shed their exoskeleton in a process known as ecdysis (from Ancient Greek: ἐκδύω — ekduo — to take off, strip off). The ‘skin’, correctly known as the cuticula in invertebrates, is also the animal’s skeletal support, and is inelastic and tough. After the invertebrate casts off its old exoskeleton, the pale and soft-bodied arthropod is described as teneral. 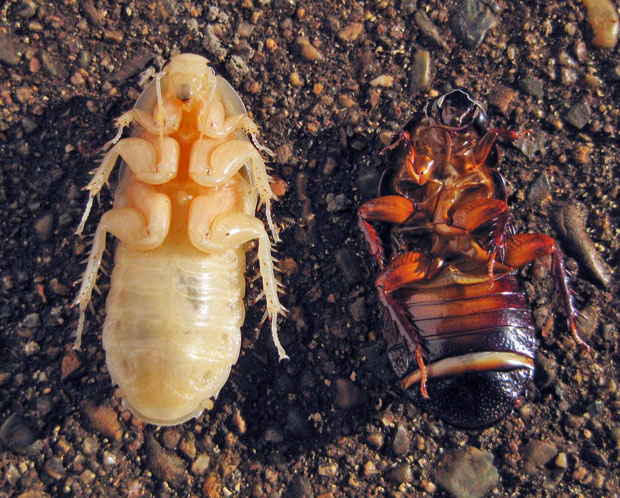 The cockroach, next to its shed exoskeleton (its exuvia). Photograph by Kim Anderson.

Within several hours the cuticle hardens (a process called sclerotization) and darkens. During this short period the animal grows — there is a transfer of body fluids from soft parts before the new skin hardens. It may need to stretch constantly to ensure that it can move when its new skin toughens up. Ecdysis may also enable the animals to regenerate missing limbs or repair damaged tissue, although may take several moults to complete. The old, empty exoskeleton is called an exuvia (or exuvium).

Before shedding its old skin, the arthropod becomes inactive for a period of time, undergoing apolysis (separation of the old exoskeleton from the underlying epidermal cells). 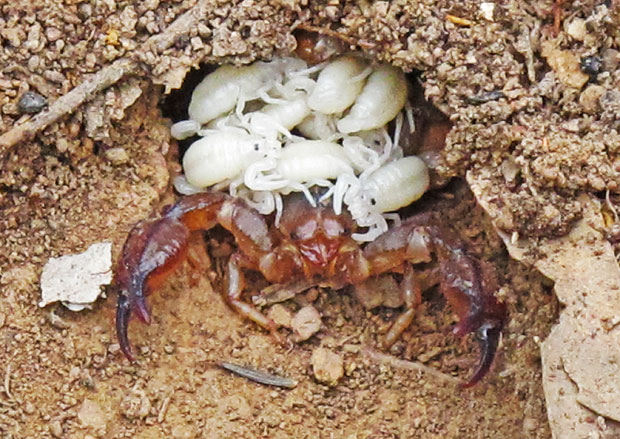 Some more arthropods in a vulnerable, amour-less state. But this time they have a protector. Unlike most arthropods, scorpions are live-bearers (viviparous). Young are born one-by-one and the brood is carried around on the mother’s back until they’ve undergone one moult. Until that time, they young rely on the mother for protection (unless they fall off, in which case she may eat them).

Young scorpions may need to go through between five to seven moults before reaching maturity. Depending on the species of scorpion, a female may carry from two to a hundred young on her back.

Thanks to Kim and Stuart for the great images.