Queensland Parks and Wildlife Service Rangers on Fraser Island have many wildlife encounters. Most of these are enjoyable, but some are deeply disappointing.

Albatross are spectacular birds,  so spotting one is always a joy — unless it’s one that is a species not often seen in Queensland and is critically ill with a longline fishing trace hanging out of its mouth. 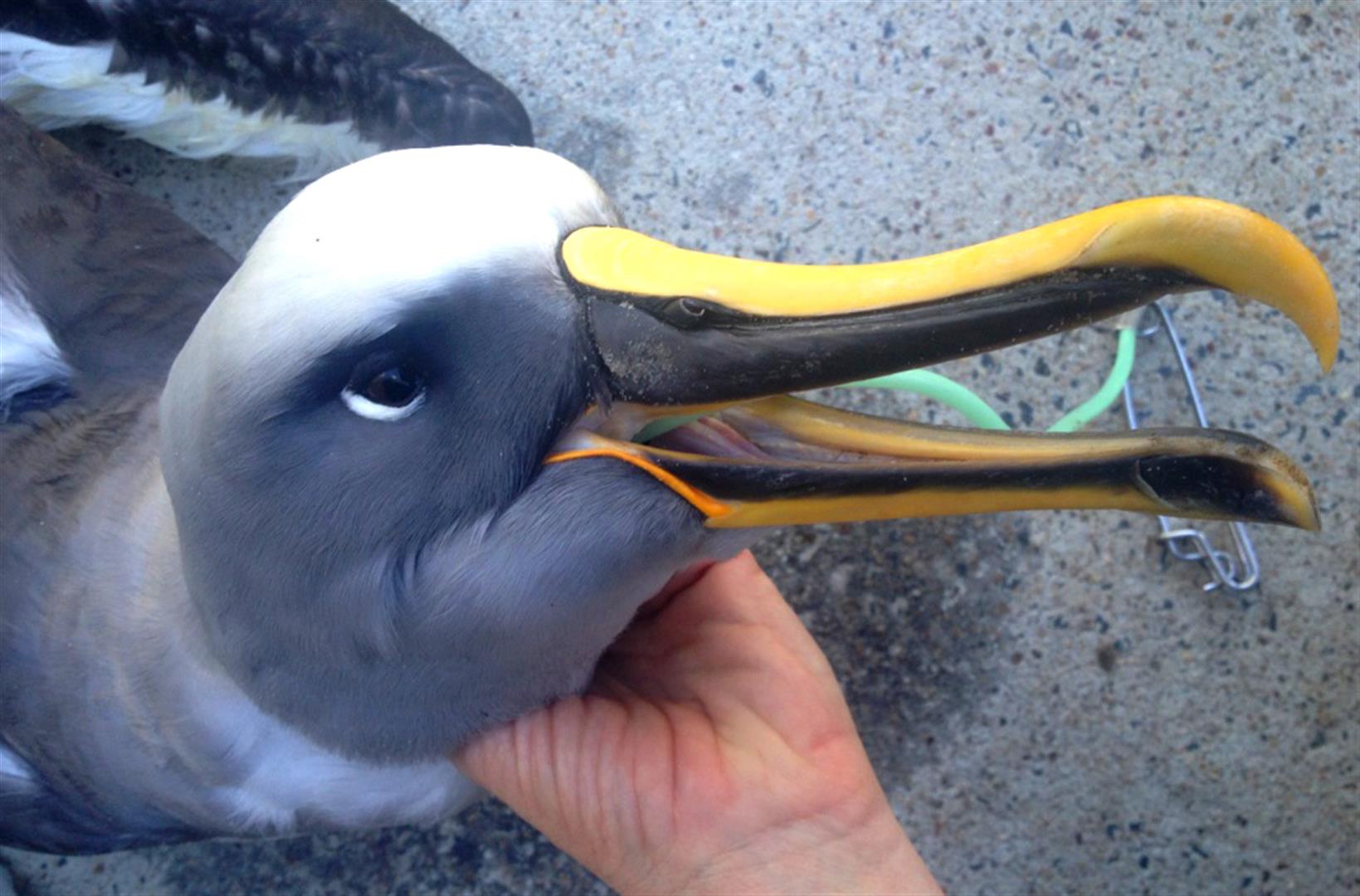 In May this year Rangers Linda Behrendorff and Darren Blake found a Buller’s Albatross (Thalassarche bulleri) sitting on the beach one kilometre north of the Pinnacles at Fraser Island. The bird  had a green nylon trace with a large longline clip hanging from its mouth. Although transported back to the Eurong Ranger base for urgent assistance, the albatross died that morning.

In June, the bird’s body was necropsied at the Moggill Koala Hospital  in Brisbane. Dave Stewart, of the Environment and Heritage and Protection Department of Queensland, writes:

Approximately half of the nylon trace line (the section adjacent to the hook) had changed colour, from green to yellow and all except the tip of the stainless steel hook had begun to corrode. As the albatross was frozen shortly after death, for both nylon to change colour and for the stainless steel hook to begin to corrode, suggests that both of these have been in the gastro-intestinal tract of the bird for some time, in particular the proventriculus which is involved with the secretion of digestive enzymes. 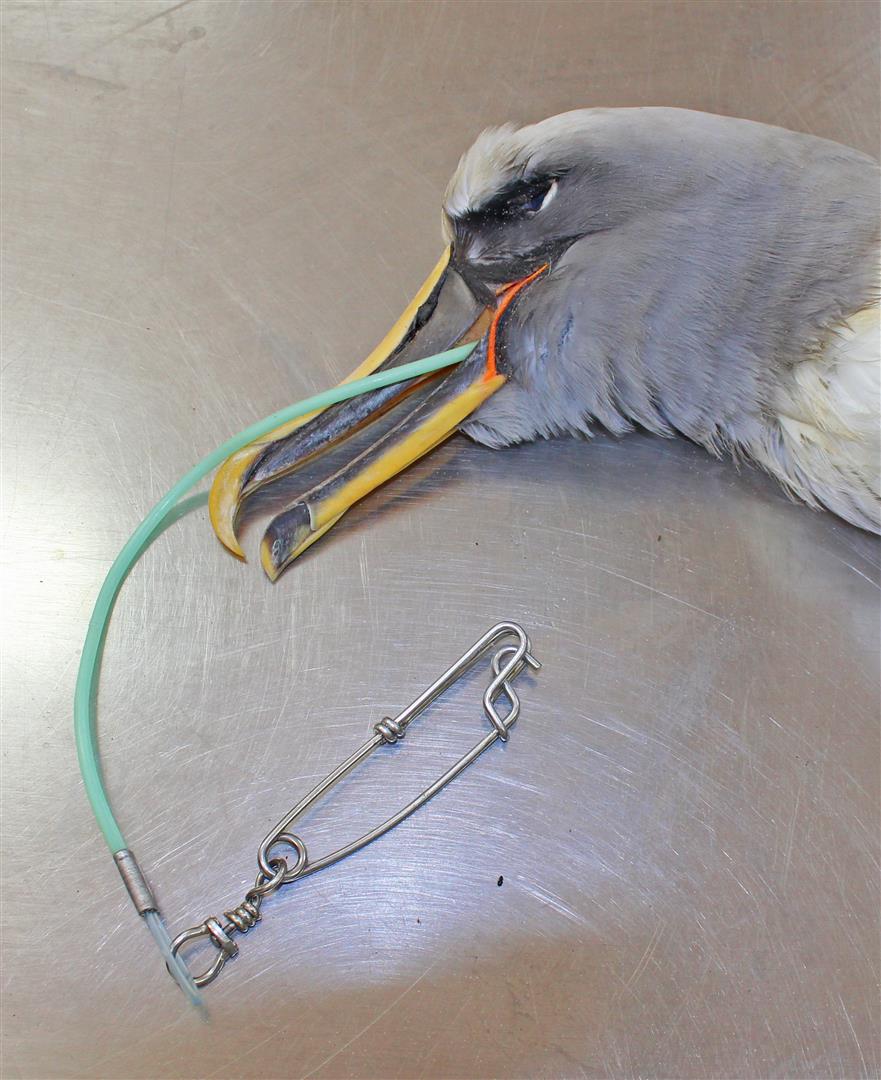 The hook was identified as a tuna circle hook — used for catching all types of fish, while the short trace indicated a drop line set-up used for many types of fish (except tuna). Dave Stewart:

There are two main periods during the longline fishing when seabirds are likely to get caught. These are during the line setting and line hauling. During line setting, baits are attached to hooks and paid out from the stern of the ship. At this stage of the fishing, seabirds risk getting hooked on the lines and then drawn underwater and drown. During line hauling, seabirds may survive the initial hauling process, but retain the longline hooks, which eventually result in their death or disability.

Presumably, most instances of hook ingestion occur as a result of processing procedures (notably the discarding of hooked fish heads by factory crew) undertaken on non-Australian and/or illegal longlining vessels. 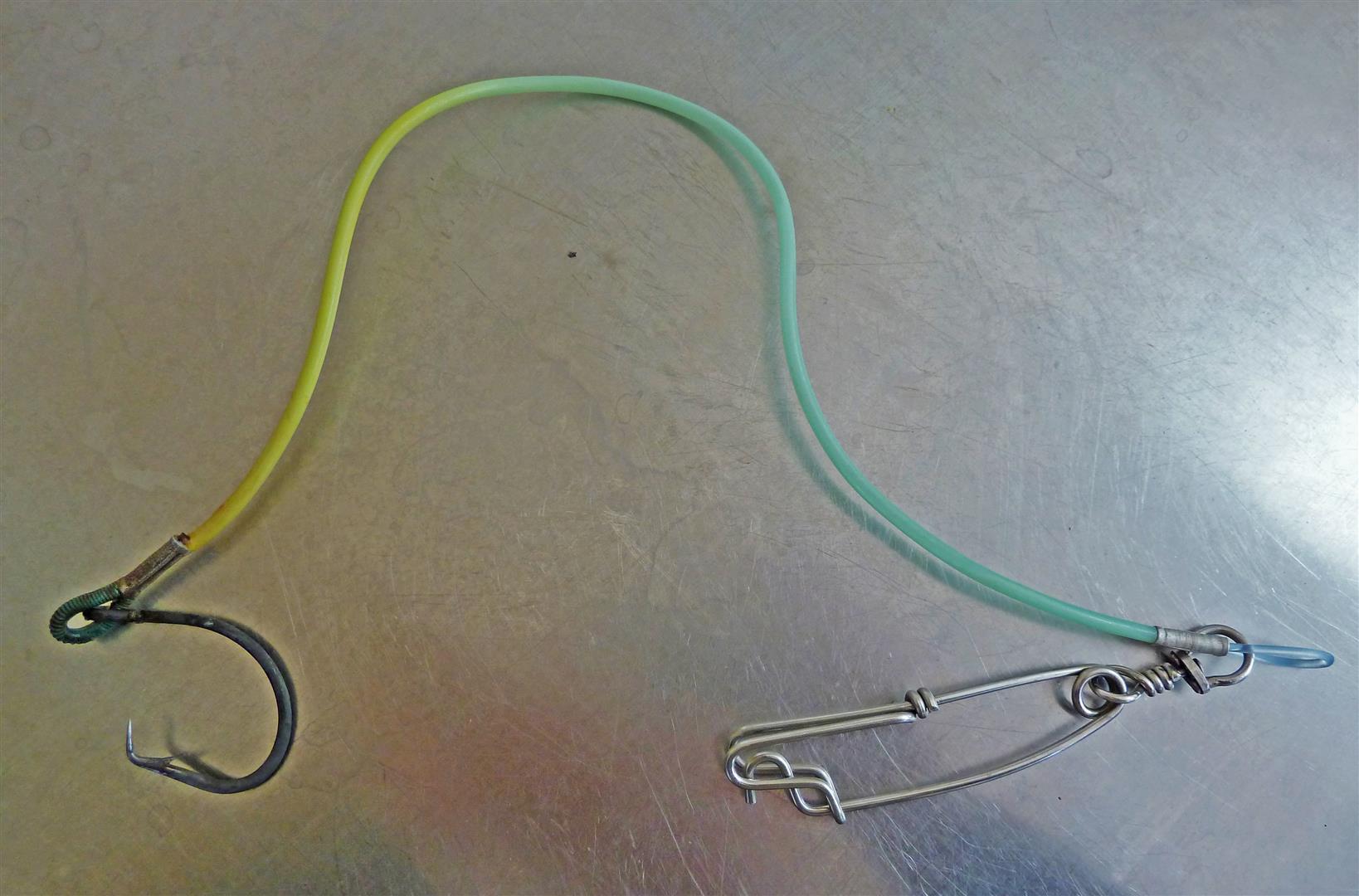 This is a medium-sized species of albatross, with a wingspan of 200 to 213cm. Buller’s Albatross are up to about 80cm in length and can live for up to 30 years. They feed mostly on fish, squid and tunicates (barrel-like filter feeders), but also octopuses, shrimps and lobsters.

While Buller’s Albatross visit Australian waters from the south, they are usually seen off the east coast from Coffs Harbour, south to Tasmania and west to Eyre Peninsula. The specimen found on Fraser Island is a rare visitor to our part of the world.  This species was unknown from Queensland until 1991, when a specimen was found dead on Frenchmans Beach on North Stradbroke Island. Since this initial record there have been five specimens found beach-washed (mainly on Fraser Island), while five live birds have been observed offshore from Southport and Mooloolaba.

The Buller’s Albatross is a species is listed as Vulnerable under the Nature Conservation Act in Queensland and the national Environment Protection and Biodiversity Conservation Act 1999. Recent population estimates for this species of albatross indicate that about 31,000 to 32,000 pairs remain. While this may sound a lot, in biological terms it is a small number. 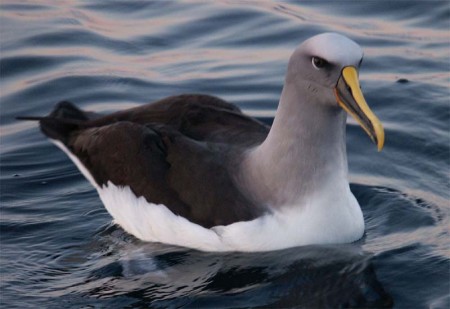 How I think we’d all rather see one of these birds. Photo courtesy Lennaert Steen.

Buller’s Albatross are known to breed on a limited number of island groups around New Zealand and in other southern waters. When breeding, Buller’s Albatross are seen mostly over the shelf and slope waters off southern New Zealand, while some birds will occasionally travel further into the Tasman Sea. After breeding, many of these albatross disperse in the oceanic subtropical waters of the western South Pacific, or the Humboldt Current off the western shores of South America. 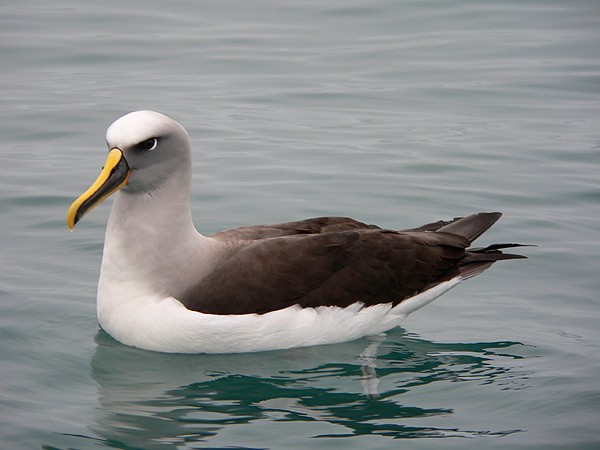 The CSIRO in Hobart is involved in a study to determine the relationship between fishing activity in the Atlantic and declining albatross populations. It is being funded by the International Commission for the Conservation of Atlantic Tunas.

Resource modeller with the CSIRO in Hobart, Geoff Tuck, says the study will make recommendations about better managing Atlantic fisheries to reduce the effect on seabirds. He says that fishing agencies are currently setting about 400 million hooks across the Atlantic, and believes that area closures or reductions in effort in particular areas or in particular fleets may help the albatross.

“That’s a lot of hooks and even though a vessel may catch either no birds on a particular set or maybe only one bird or two birds, the problem is that when you multiply that up across millions and millions of hooks then it becomes a problem for our seabirds.” 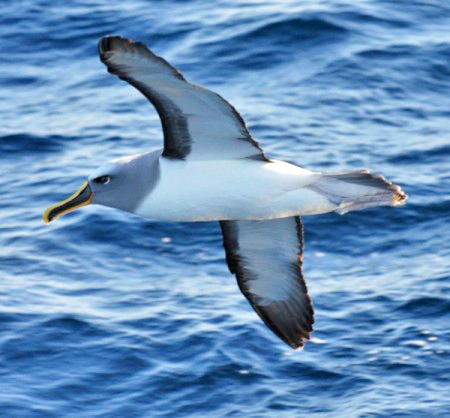 I think you could forget to breathe while watching one of these fly past. I’ve never seen one, and I probably never will, but that doesn’t matter really. I’d just like to think that these exquisite creatures will still be out there, alive and well, for a long time yet. Photo courtesy John Leonard.

Images (not credited) are courtesy Linda Behrendorrf, Jenna Tapply and Dave Stewart. Thanks to Linda and David for the information and images.

References cited in the above report: