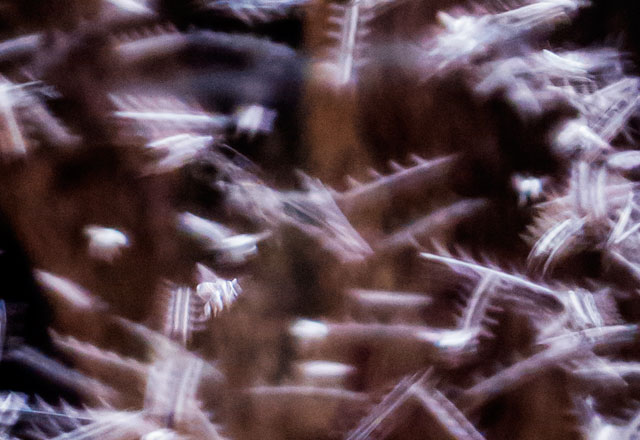 My son has been keeping an eye on a colony of Stingless Native Bees (Trigona carbonaria) in his school grounds. These tiny (4mm) native insects are found across open forest, woodland and rainforest through coastal areas of eastern Australia.

We stopped to look at the bees after school recently, and found them swarming in the air, with hundreds moving about in a group being gently pushed backwards and forwards by the breeze. I took some images with a compact camera, which gave quite a surreal effect. 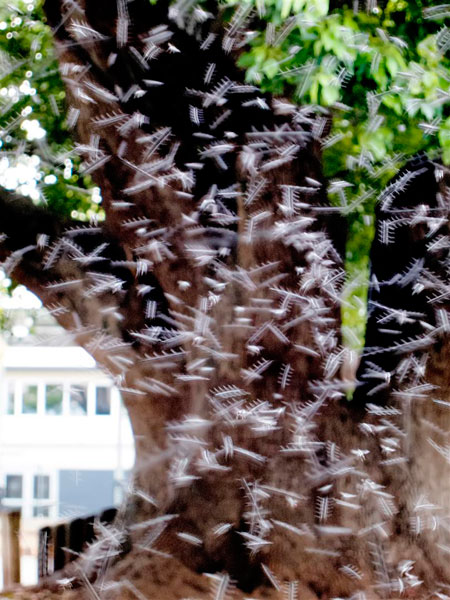 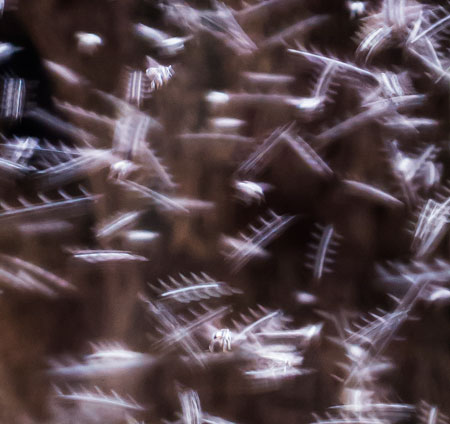 What were they up to? Native Stingless Bees do not sting (hence the name), but can defend their nests by biting and swarming. There seemed to be no attackers about, however.

I asked QPWS Resource Ranger Rod Hobson what they might be doing, and he replied in his usual helpful way. Clearly he failed to see the aesthetic appeal of my abstract bee images:

Due to the fact that all but one of your images concentrates on the arty-farty depiction of this phenomenon and only one is of any value whatsoever in deciding on what is actually happening with the colony concerned it is impossible to give a definite explanation to your observation. There are three possible scenarios to this particular incident:

•  Native bees of this genus do swarm and can do so at any time of year including winter. Most of the swarming bees are drones obviously with a virgin female attending. These swarms are usually small up to about 200 individual bees.

•  Pheromones bind a hive together and each have has a pheromone particular to itself. Occasionally a hive gets so big that there is not enough pheromone to go around and bees that miss out are driven from the hive because they are not recognised by other members of the hive. These swarms can be of considerable size.

•  Trigona spp. (yours are carbonaria) are an aggressive mob towards others of the same species from different hives and pitched battles often take place between hives resulting in many casualties. The area around the defending hive is often left with a litter of corpses around its entrance after the battle ceases.

Judging by the number of bees that you report and appear in your images I’d go for either the second or third scenarios. Have a look around the hive ASAP to see if there is any evidence of victims of an invasion remaining although these could have already blown away after last nights wind or have been carried off by scavengers especially ants. 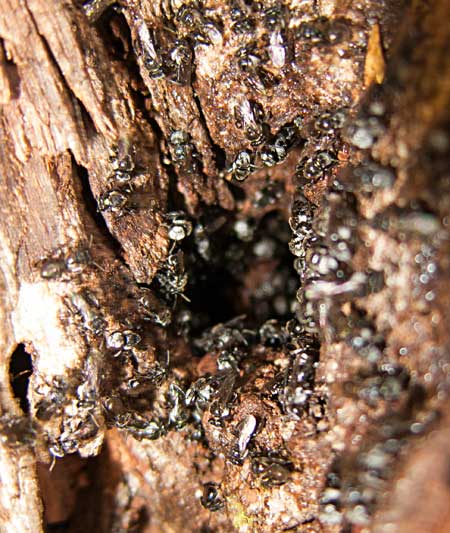 The bees at the entrance to their hive. These social insects make nests out of wax and resin in hollow tree trunks, branches, fallen logs and rock crevices. The brood comb is a horizontal spiral and pollen and honey are stored in pots.

1 thought on “Flight of the stingless bees”