A post from friend and fellow naturalist Nadeem Samnakay, who dwells in Canberra, Australia’s capital city. Canberra is home to, among other things, Federal Parliament. 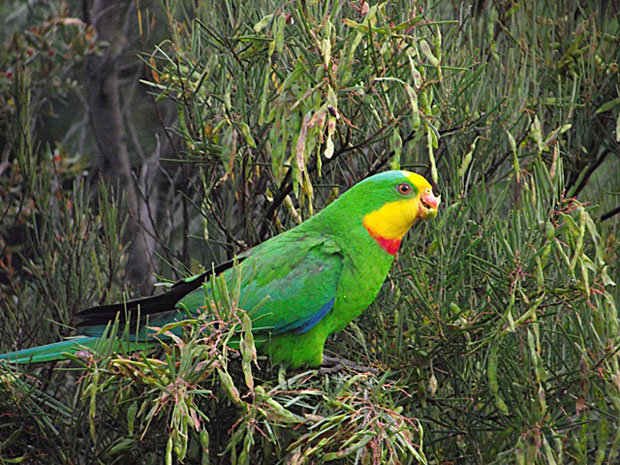 A Superb Parrot (Polytelis swainsonii) feeds on acacia (wattle) seeds on a nature strip in suburban Canberra. The Superb Parrot is endemic to south-eastern Australia. It is found in the Riverina area of New South Wales and Victoria, and, in winter, in northern New South Wales. Classed as a ‘vulnerable’ species, there are less than 5000 breeding pairs left in the wild. All photos copyright Nadeem Samnakay.

Canberra is a drawcard for pollys. Some are deserving of our support while others are despised and even considered pests. One could easily be misled into thinking I am referring to our elected pollie representatives, but no, I’m referring to the rightful birdbrains – the parrots.

I’m now entering my seventh year of residing in Canberra’s northern suburbs. I came to Canberra in December 1995 and the suburb where I live was, at the time, the outer fringe of urban development. Over the past four years, the real estate boom has transformed the surrounding grazed woodlands into HD suburbs. High Density — with the average house block being around 500 square metres, and High Definition because there is very little to deceive the eye — wall-to-wall bricks and mortar. Somewhat ironically, one of the newly established so called ‘green’ suburbs in my locality, Forde, has marketed its land release on TV (HD naturally) with an animation of a pair of Superb Blue Fairy-Wrens frolicking in open woodlands, as though residents will be living in harmony with the native wildlife. Yet, despite the Blue Wrens adaptability when it comes to inhabiting suburbia, these new HD suburbs have little, if any, natural appeal that would attract such charismatic birds.

What will these new subdivisions mean for bird life in years to come? Only time will tell. Somewhat comfortingly however, the older established suburbs with larger block sizes offer habitat for a number of bird species. I share with you my casual observations of the parrot species that visit my ‘patch’ and those I see on my weekly bicycle commute to work and back, as I meander through tree lined suburbs and open grasslands. 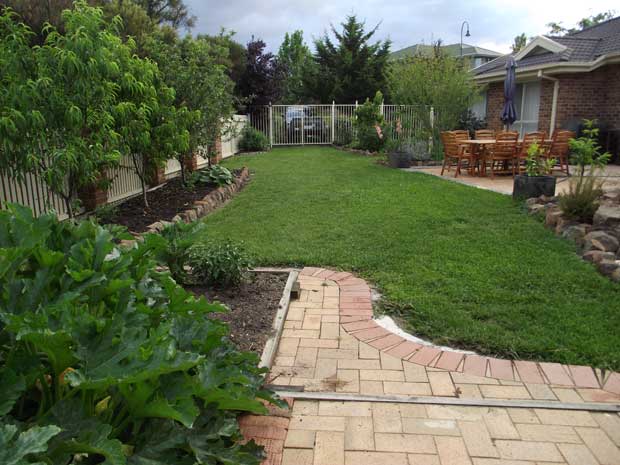 My patch — acacia nature strip left of the fence, fruit trees and ‘turf’ that feeds the Crimson Rosellas.

Even without venturing onto my trusty steed, I am enriched by the pollys that frequent my garden most mornings — in which I include the 10 metre wide native vegetation-dominated nature strip on two sides of my boundary. Daily visitors to my weed-dominated ‘turf’ are the Crimson Rosellas, attracted in-part by the discarded parrot seed mix surplus to the daily requirements of Phoenix, our pet cockatiel. These rosellas also feed on the acacia seeds in the nature strip in summer. Somewhat less frequent scavengers of the parrot mix are the Eastern Rosellas. Ordinarily they would feel more at home in my garden were it not for the bullying tactics of the Crimsons and one territorial Crested Pigeon, who considers my TV antenna as purpose-built pigeon roost. 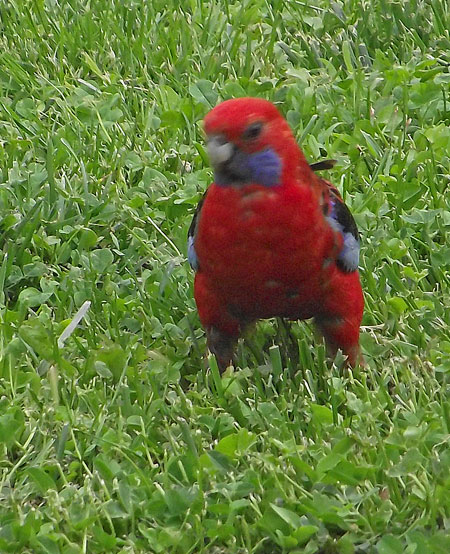 Intriguingly, some weeks ago, I was graced by the company of a solitary Superb Parrot. It was very heartening to see that at least one vulnerable native species benefits from the vegetation in the nature strip. Initially I was dismayed that it was a solitary visitor but the next day, my spirits lifted when there were up to seven Superb Parrots feeding on the acacia seeds. One particular individual was so engrossed in feeding that he allowed me to approach to within a few metres of him and I was able to take some photographs. 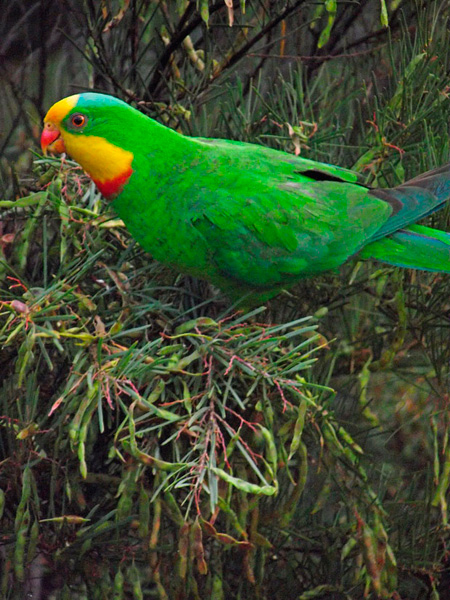 Superb Parrots nest in small colonies in the hollows of large trees, mainly in tall riparian River Red Gum Forest or Woodland. They forage up to 10 km from nesting sites, sometimes entering the suburbs of Canberra.  They feed on grass seeds and herbaceous plants, as well as fruits, berries, nectar, buds, flowers and insects.

After a little while the parrot flew to an adjacent acacia and shared the bounty with a pair of obliging Sulphur-Crested Cockatoos that had earlier spooked the remainder of the Superb Parrots away. The Sulphur-Cresteds are well established throughout the northern suburbs at least and in summer, they revel in consuming the fruits of ornamental plum trees planted variously on road verges. I suspect it’s only a matter of time before they discover my own young fruit trees. 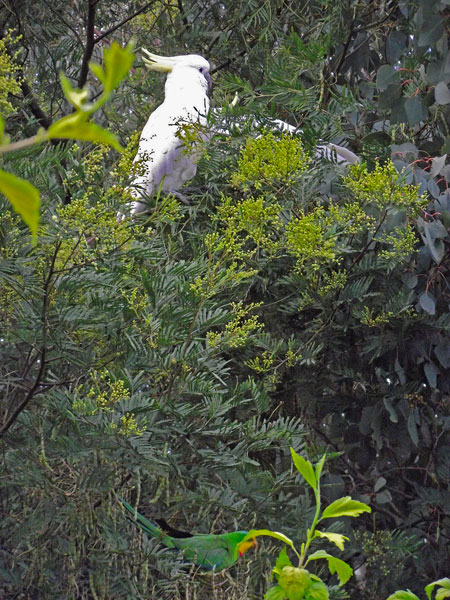 Sulphur-crested Cockatoos sharing an acacia with a single Superb Parrot.

All this viewing pleasure before I even step out of the house. If I then set off on my trusty steed heading for the city (i.e. a place where bicycle riders receive obligatory howls of abuse from drivers and pedestrians alike), within a few hundred metres of commencing my journey I am often delighted to see populations of Red-Rumped Parrots scampering amongst the grass. More often than not, I’m entertained also by the antics of a healthy number of Galahs sharing in the grass seed or perched on transmission lines. These birds exhibit behaviour similar to that seen during question time in parliament, which leads me to thinking that the name ‘pollie’ was derived from behaviour associated with Galahs! Unlike many elected representatives, I find the Galahs intriguing birds. The occasional few have such a deep rose colouration, they seem more deserving of their roseicapilla species name.

As I leave the open grasslands and enter into the established low density inner city suburbs, the closed canopy dominance appeals to the King Parrots who occasionally feed on the acacia seed back in my patch. Even less frequent, albeit heard more often than seen, are the Gang Gang Cockatoos — muffling a strangled call to their colleagues in stands of tall mature eucalypts. Nearby, in the pine dominated ‘forests’, the Sulphur-Cresteds wait in ambush. Every now and then, an individual swoops down fast and low from behind me, then lets out an almighty screech that awakens me from my auto-pilot mode. As I jostle for control of my bike, pretending I was aware of the impending prank — I am reminded by the fading laughing chatter of the cockatoos that concrete, steel and recycled air beckon me to my office.

A quick shower, change and a new alter ego. Fresh and energised from my ride with nature, I enter the starkly artificial office environment where I have been conditioned to robotically interact with an electronic device for the next eight hours or so (less if the need for caffeine is exceptionally strong). On the odd occasion, Long-Billed Corellas wake me from my robotic slumber as they land with a thud at my office window and attempt to chew at the rubber seals designed to prevent fresh air entering the office environment. Perhaps they see my anguish, trapped in a glass and concrete cage with views to Lake Burley Griffin and the pollies’ nest. Whatever the motivation, I’m very much the richer for the presence of Canberra’s pollys — all of them superb.