The flower is undoubtedly one of the most beautiful of all our native plant species.
Keith Williams, 1979.

With memories still fresh of my water-level encounter with these Giant Water Lilies at Lake Nuga Nuga in 2013, I recently came across some information on these spectacular plants in Native Plants of Queensland, Volume 1 (1979) by Keith Williams.

The four volumes of this title produced by this eminent Queensland naturalist from 1979 to 1999 contain a wealth of information on the State’s plants and their habitats. I’d encountered very little information on this species of plant when writing my earlier blog post on Lake Nuga Nuga. 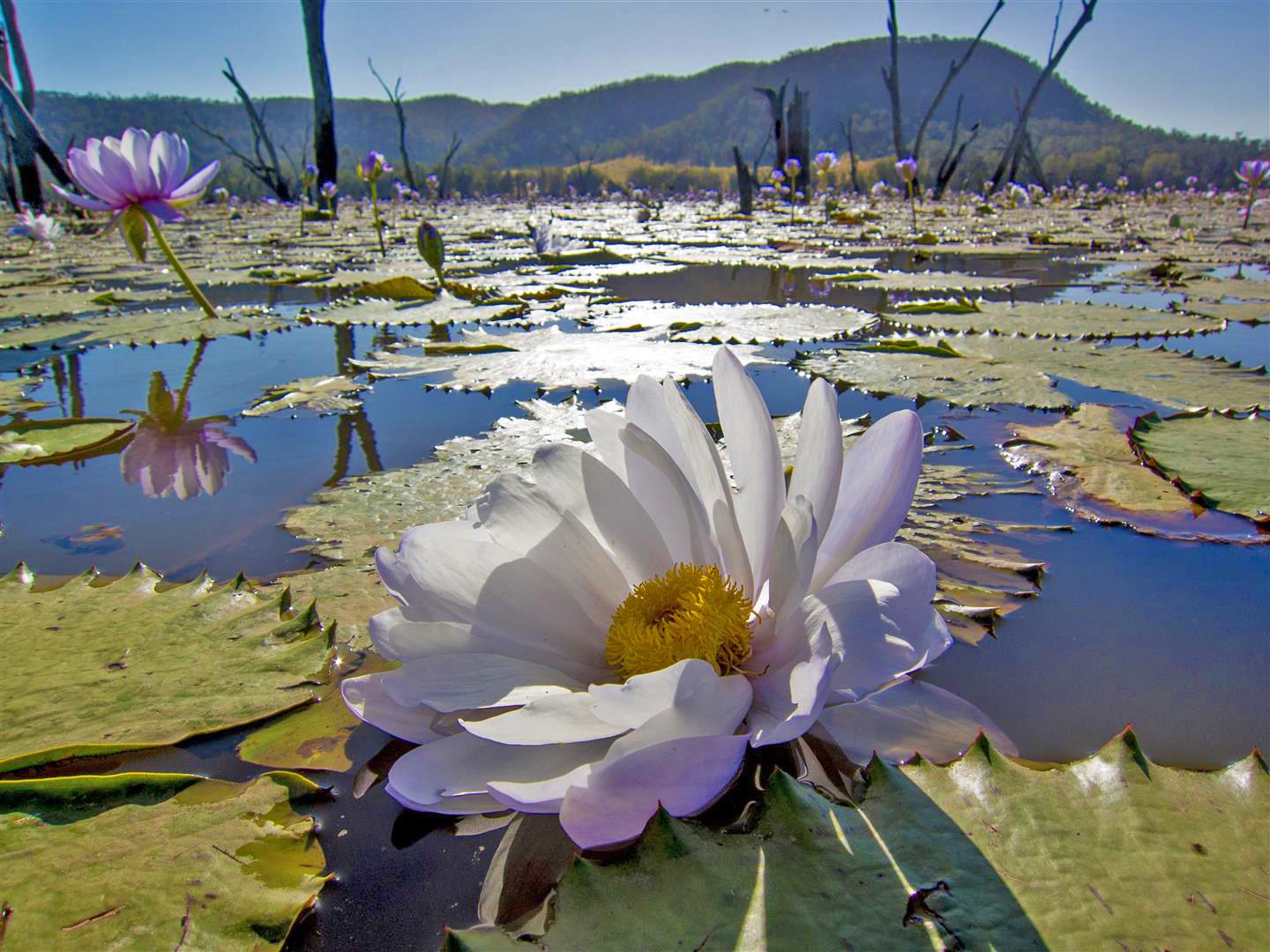 Water lilies are familiar to people, as cultivated varieties are grown in artificial pools. The Giant Water Lily in its native habitat is a spectacular plant. All photographs taken at Lake Nuga Nuga by R. Ashdown.

From Native Plants of Queensland by Keith Williams:

This species is found in coastal and sub-coastal areas from north Queensland to the southern border. In many places the pest Water Hyacinth has almost, if not completely, eradicated the water lily. 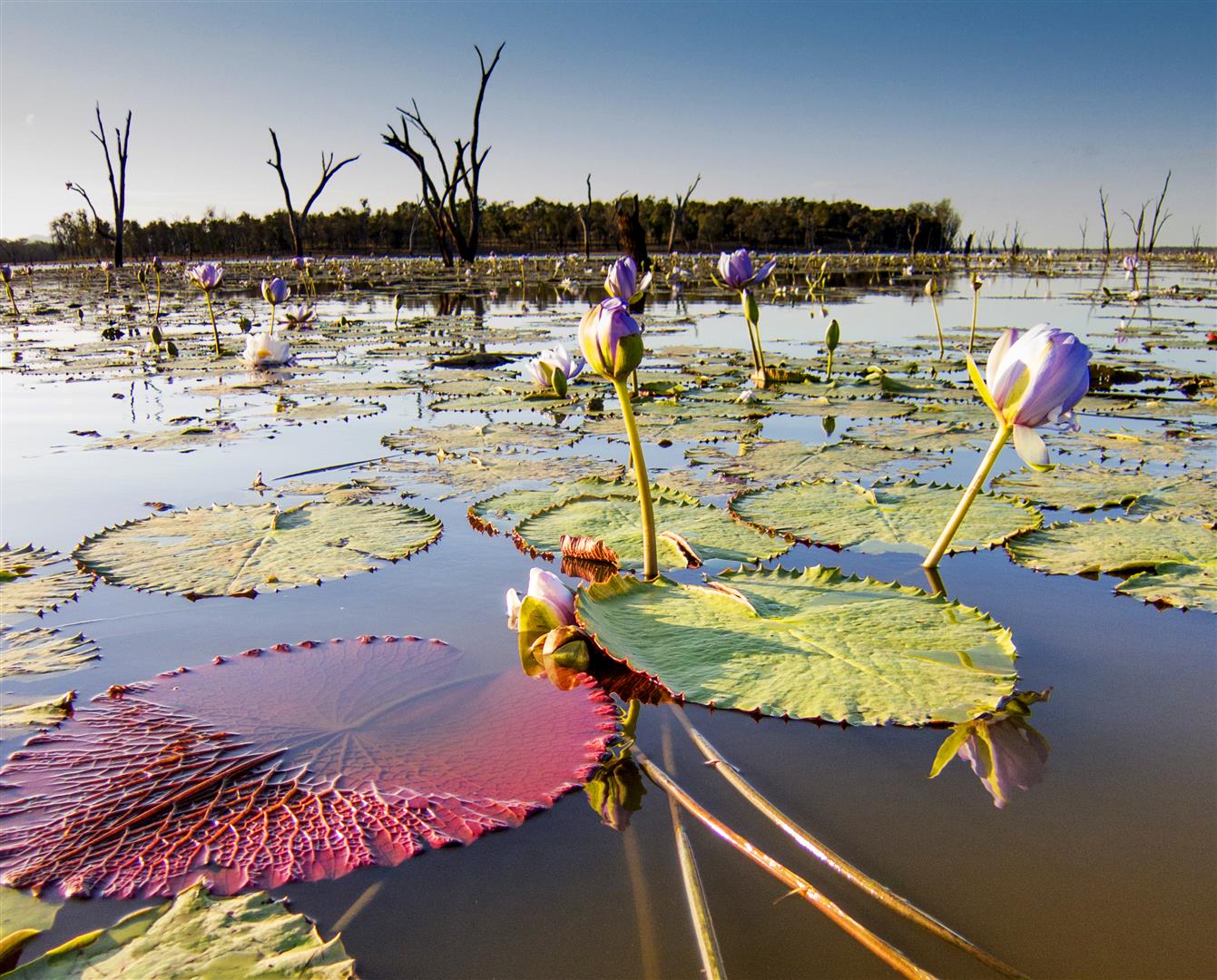 ‘The large flat, floating leaves of the Giant Water Lily have a very prominent, raised network of veins that spread from the junction of the leaf stem on the under surface. The upper surface only is water repellent and a shiny bright green, the under surface is often a very rich purple.’ – Keith Williams.

The Giant Water Lily grows in water of various depths and this varies from the shallow edges of the the quiet waters of the habitat, to water that may be greater than three metres in depth. It has been observed that plants growing in deep water have a tendency to produce larger leaves and flowers than those in shallow water. Many leaves form a single plant and when they reach the surface they may cover an area with a diameter of about four metres. 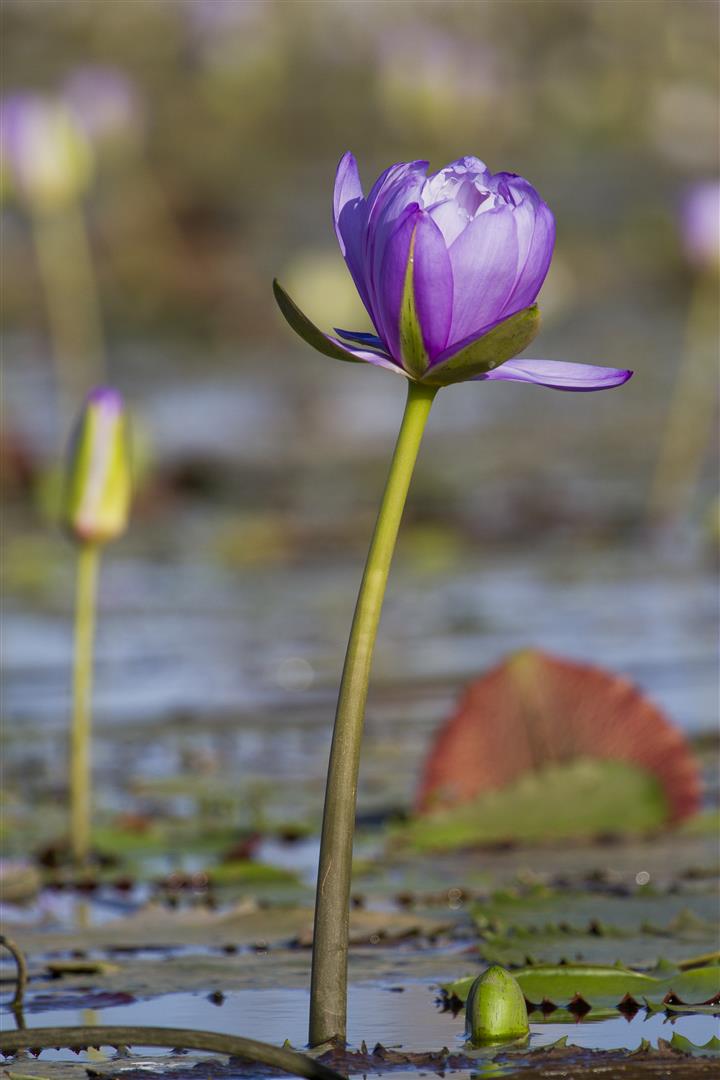 The flower is undoubtedly one of the most beautiful of all our native plant species. The flowers may be more than 30 cm in diameter. I have observed them to be larger than a dinner plate. The flowers have a delicate fragrance and have a life of little more than one day. 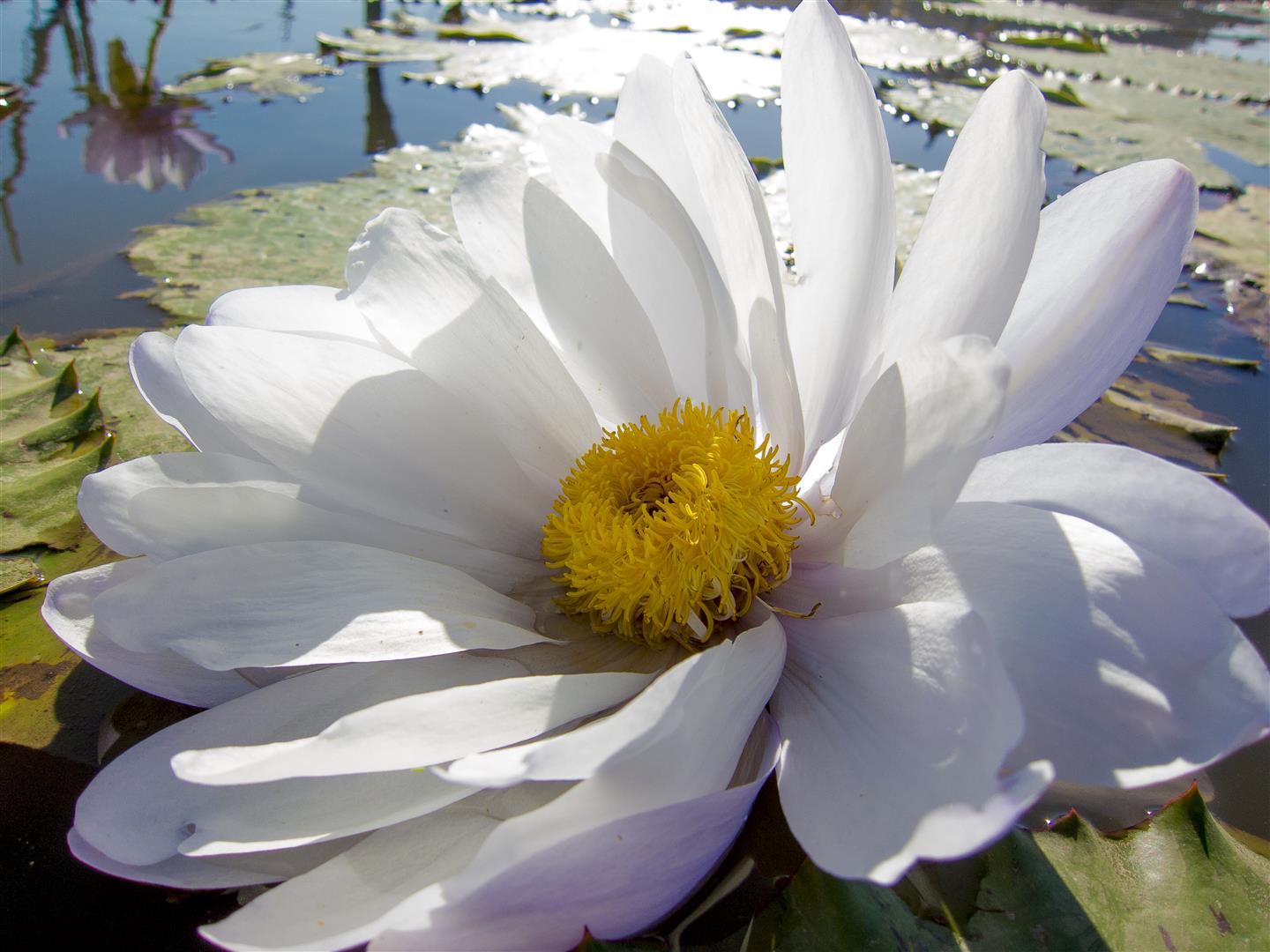 As soon as they open in mid-morning the various insects visit them in numbers and pollination is effected very quickly. The stem then bends several times and this pulls the flower under the water, The seed receptacle forms very quickly, and the small black seeds are released finally when the fruit disintegrates. The plants are rooted in soft alluvial muds and the spongy white roots spread outwards from the tuber for long distances in all directions. 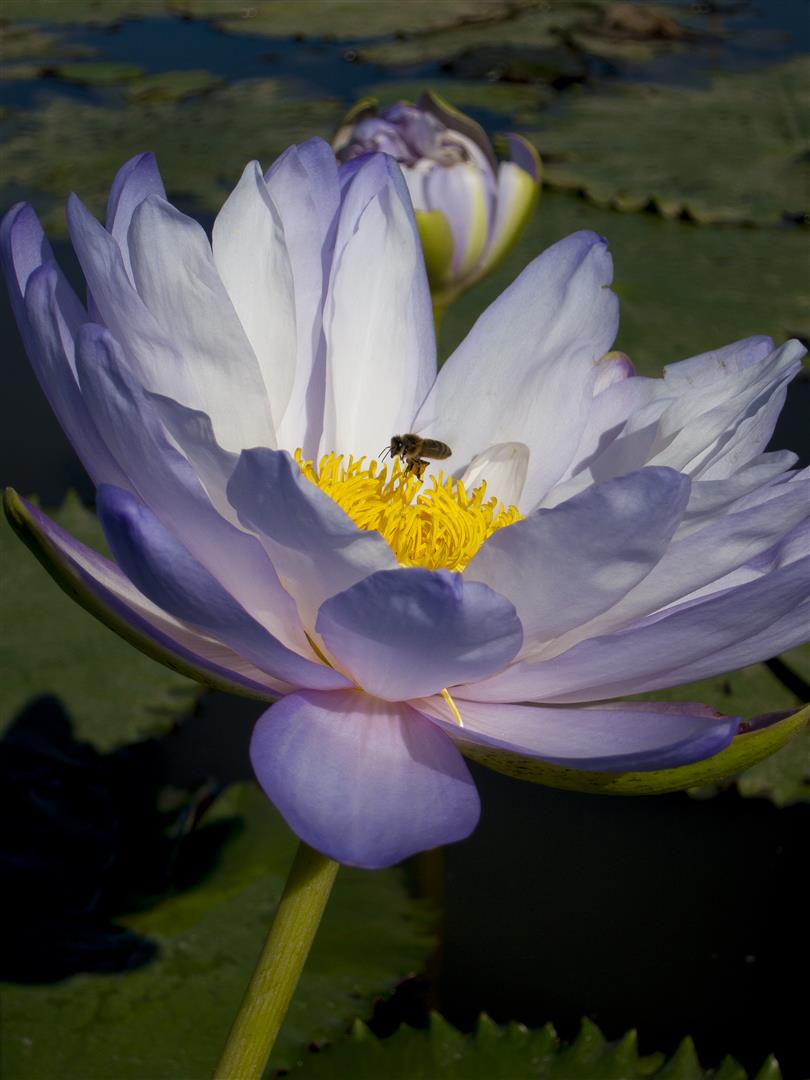 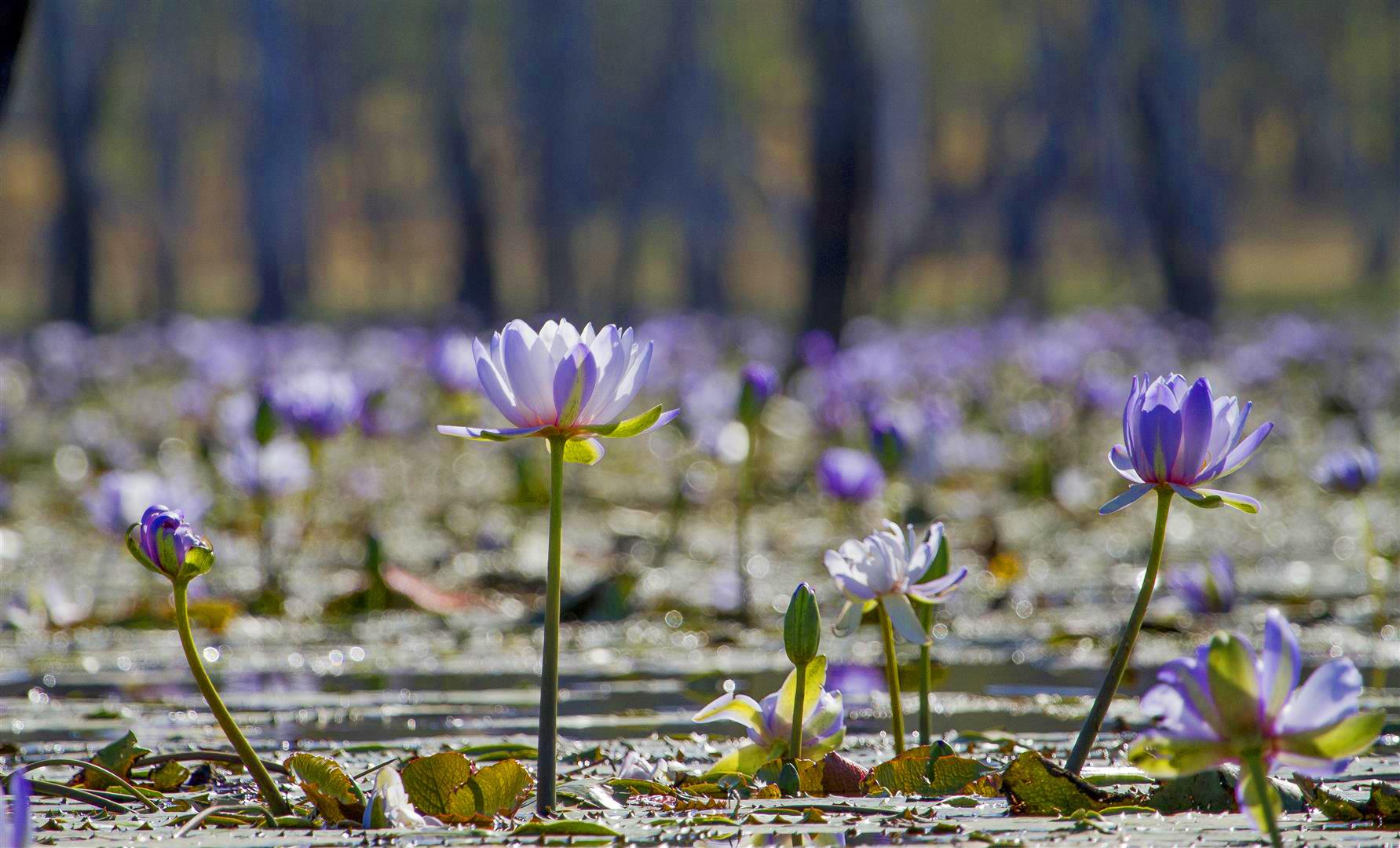 The plant was an important food source for Aborigines, who ate the fresh flowers as well as the seeds. The importance of the plant is evident as the Aboriginal names Arnurna, Yakp-Kalo, Kaooroo, Moi-U, Thindah, Thoolambool, Mille, Thoongoon, Urgullathy and Irrpo all demonstrate. Many of these names referred specifically to parts of the plant. 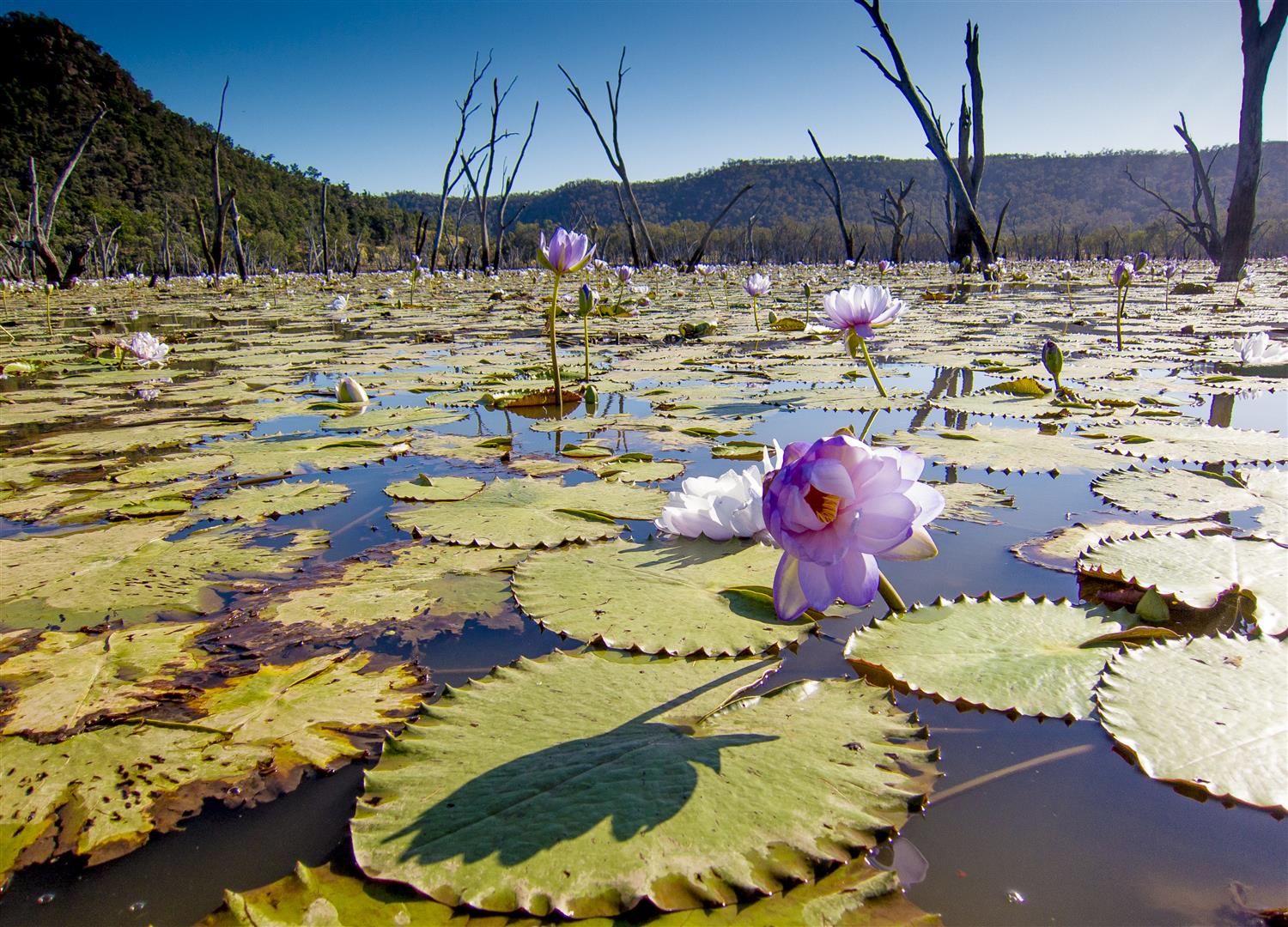 Giant Water Lilies only thrive in clear water. Where there is constant heavy turbidity the plants die. Many areas where they were once plentiful have been lost because colloidal clays have entered the ponds and as they remain in constant suspension, they inhibit growth by preventing light reaching submerged parts of the plant. 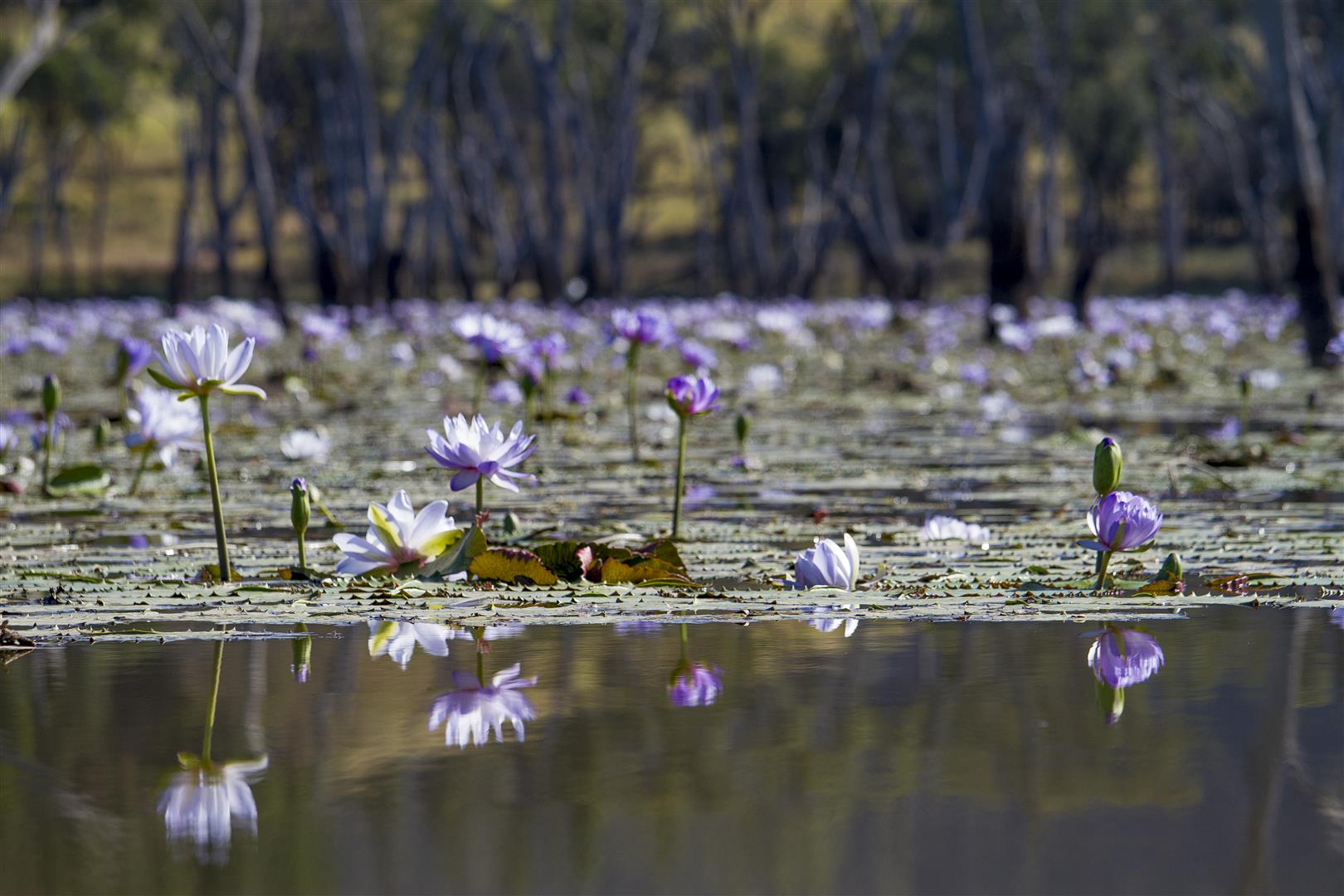 Colour forms are found and they may be pure white, white with blue petals, or some have tips of colour on the outside petals, A very beautiful pink form, the Undulla Lily, occurs in a small creek in southern Queensland.

With a wide range of natural history interests — fish, both marine and freshwater; birds; insects, particularly butterflies; and native plants, Keith Williams, as well as being a practical, expert naturalist and photographer, was a dedicated member of The Queensland Naturalists’ Club. An astute observer of wildlife, Keith started writing Nature Notes for the Club Newsletter in May 1963 with his note on the Golden Bower Bird, following this with notes on subjects as diverse as koalas, snakes, geckos, and birds such as white faced herons, red-backed wrens and all kinds in between.

His writing was not restricted to informal Nature Notes, for Keith’s magnum opus was Native Plants — Queensland, the first volume of which was published in 1979 and the fourth and final volume in 1999. These four volumes, of over 1,400 pages, have been, and will continue to be, used by many naturalists and aspiring botanists. If he had no other achievements, this work alone would assure Keith Williams of a place in the ‘Naturalists’ Hall of Fame’.

Keith wrote a number of more formal papers for The Queensland Naturalist among which was one on the fishes of North West Island (1969) which, together with the generous giving of his time, helped many members identify the small fishes of the coral reef pools on future trips.

5 thoughts on “The Giant Water Lily”