I recently accompanied my son and father-in-law on a fishing trip along the jetty at Bongaree, on Bribie Island. Unlike these two fishing legends, I’m hopeless at catching anything, so it was not hard to be distracted by the sight of two unusual birds sitting with the Silver Gulls and Pelicans on the busy beach. 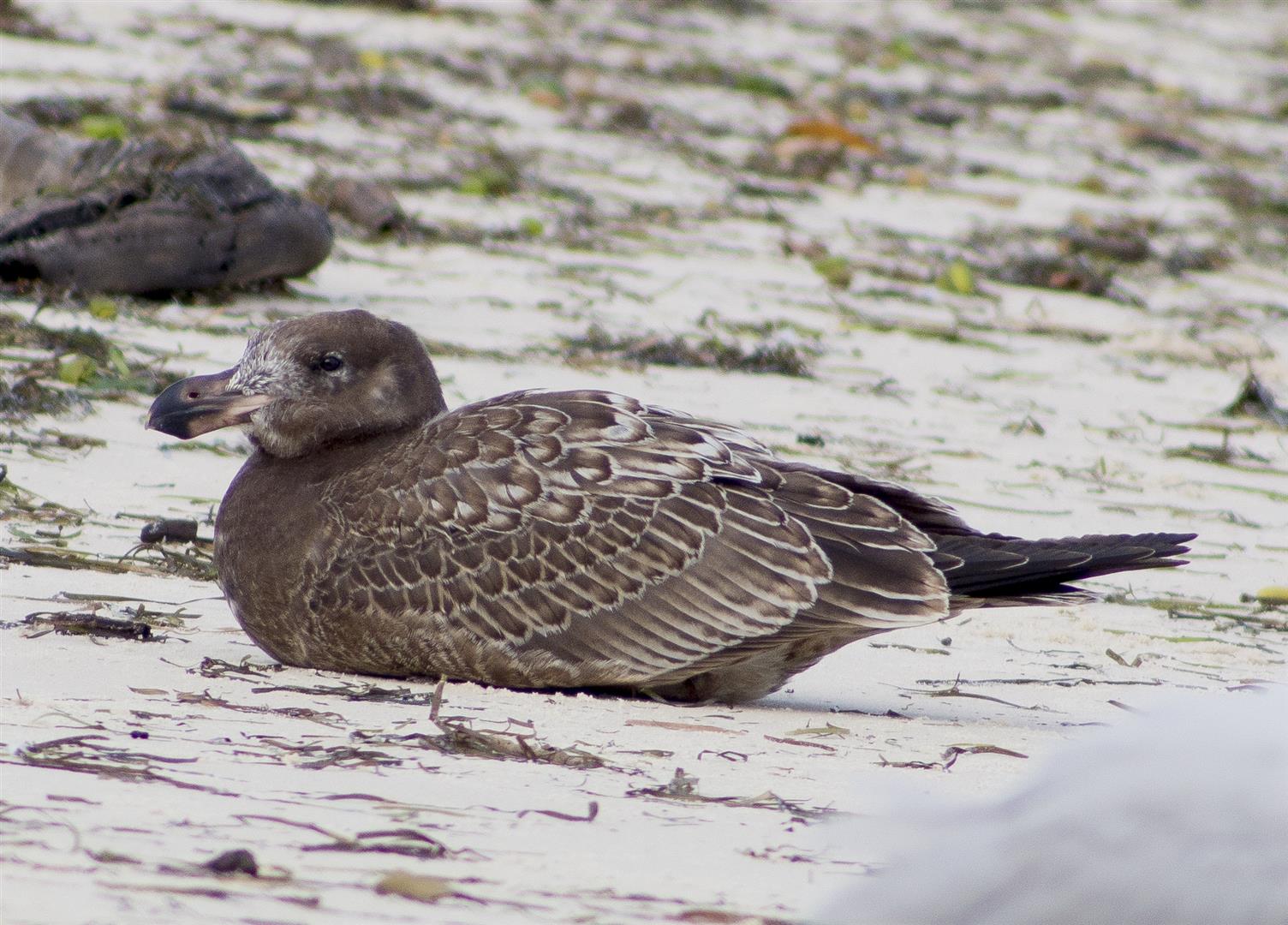 It was a pair of immature Pacific Gulls, which were quite confiding and allowed me to get a few images. I’d only ever seen this species before at Bruny Island in the far south of Tasmania a decade ago, so it was interesting to see them here in the north. 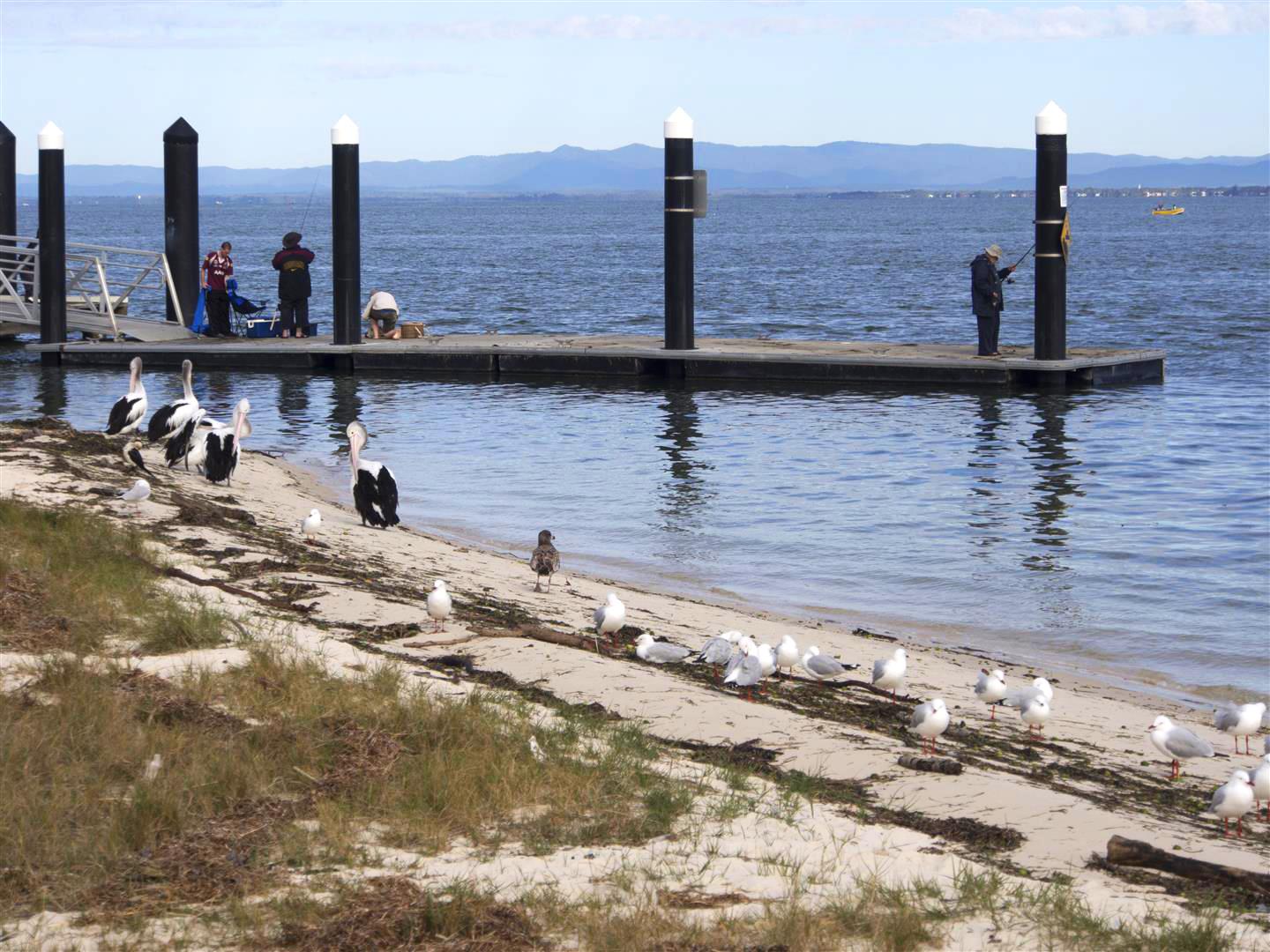 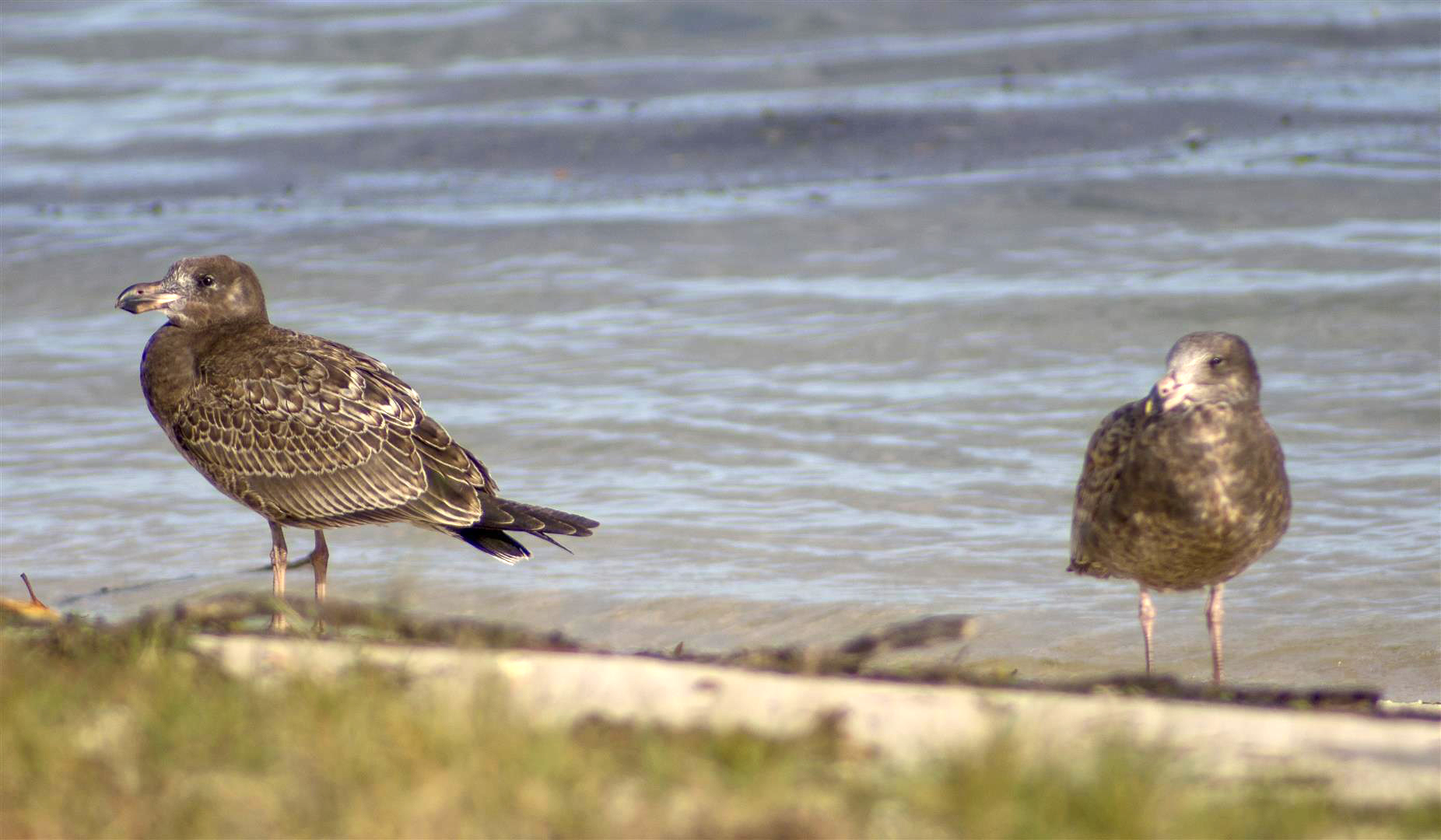 Pacific Gulls, also known as Jack Gulls, Molly Gulls or Mollyhawks, are larger and heavier-billed than any other gulls. They are found on beaches, headlands and offshore islands in southern Australia, rarely straying further inland from the coast than saline coastal lakes and estuaries. 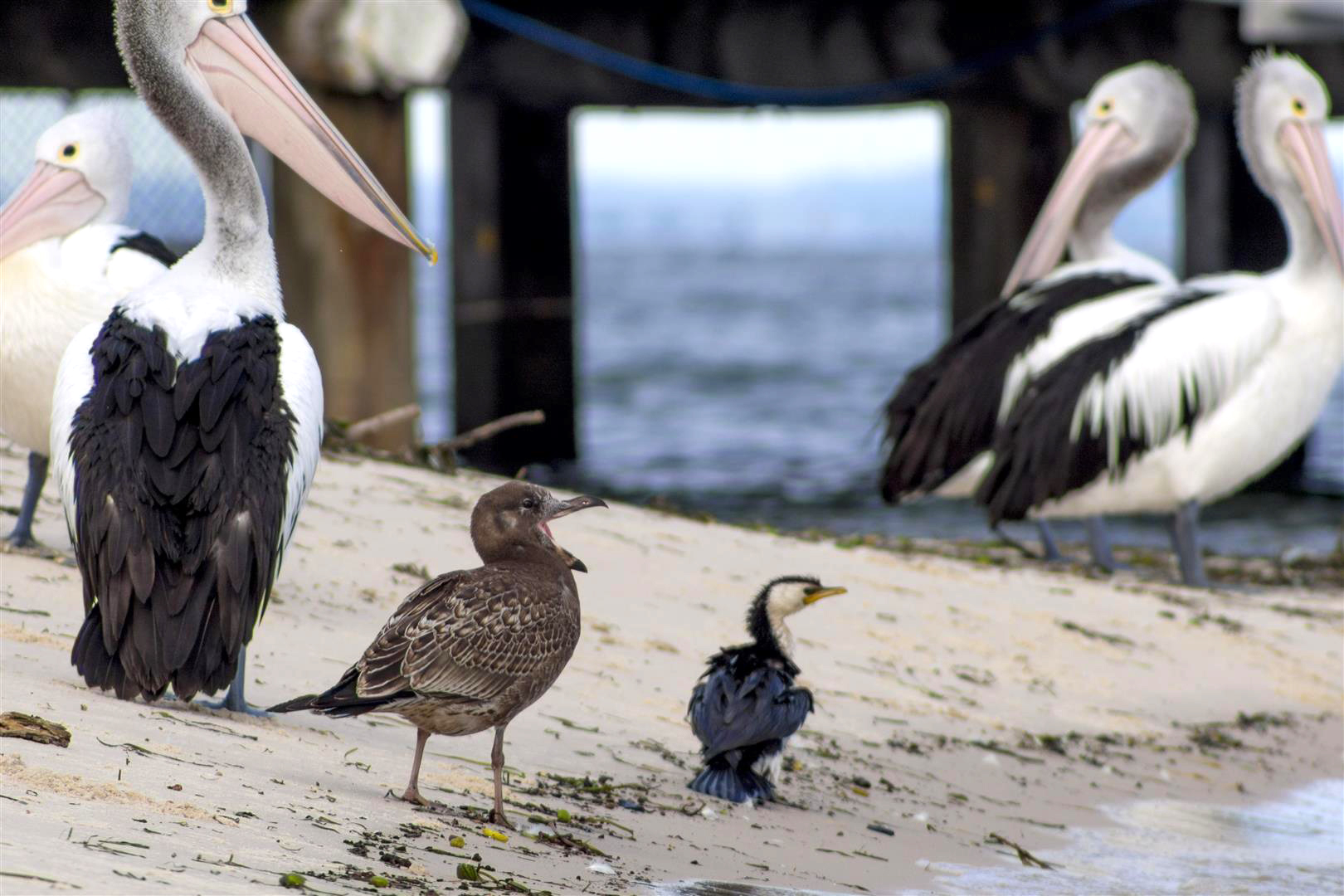 Pacific Gull with Little Pied Cormorant and Pelicans, Bribie Island. Adult Pacific Gulls have mainly black and white plumage, with bright yellow bills. Adult birds pair permanently and tend to stay all year at the same stretch of shore. Young birds, however, disperse widely after fledging, travelling hundreds of kilometres up the east and west coast before returning south to breeding grounds a year of two later.

A nation-wide study on Pacific Gulls has shown that numbers of the birds are falling in some parts of Australia. At the same time research has revealed “unexpectedly intensive movement of the South Australian population of Pacific Gulls”. While the average movement  of adult Pacific Gulls is said to be about 40 km, one South Australian bird has been reported 400 km away. Said researcher Dr Bruce Robertson, “He packed his suitcase and went a long way and we don’t know why.” 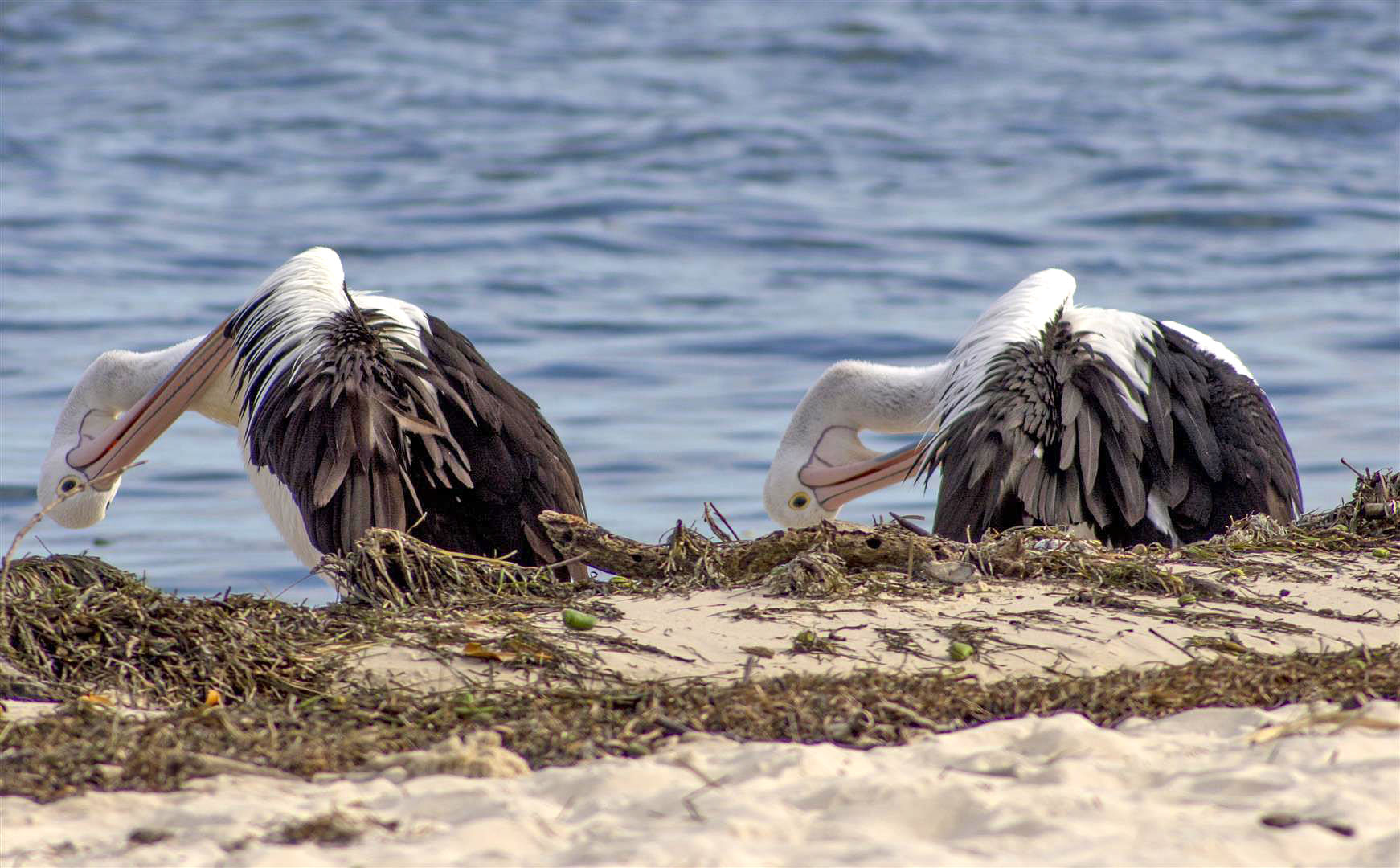 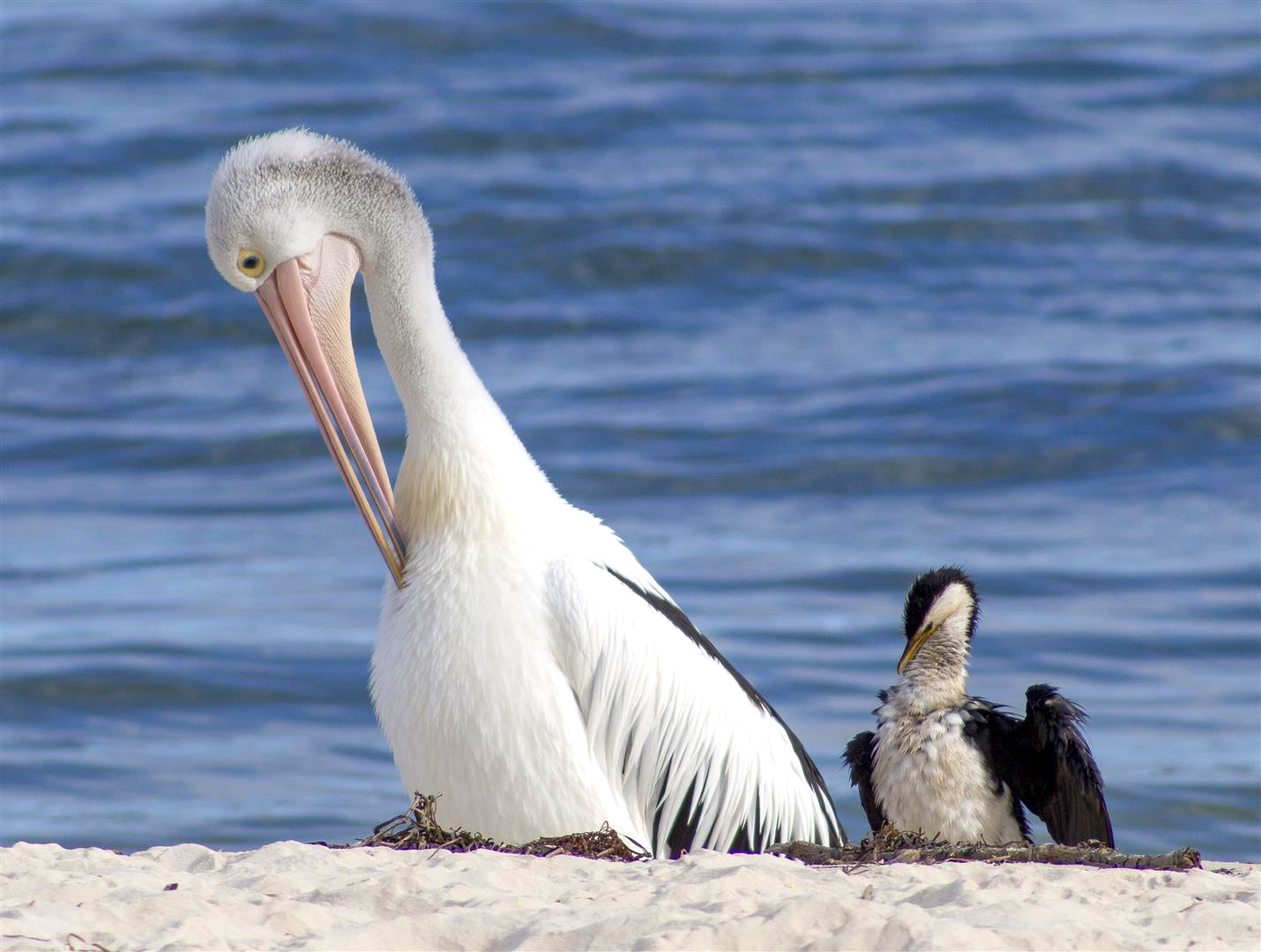 The big and the little of beach birds. Pelican and Little Pied Cormorant. 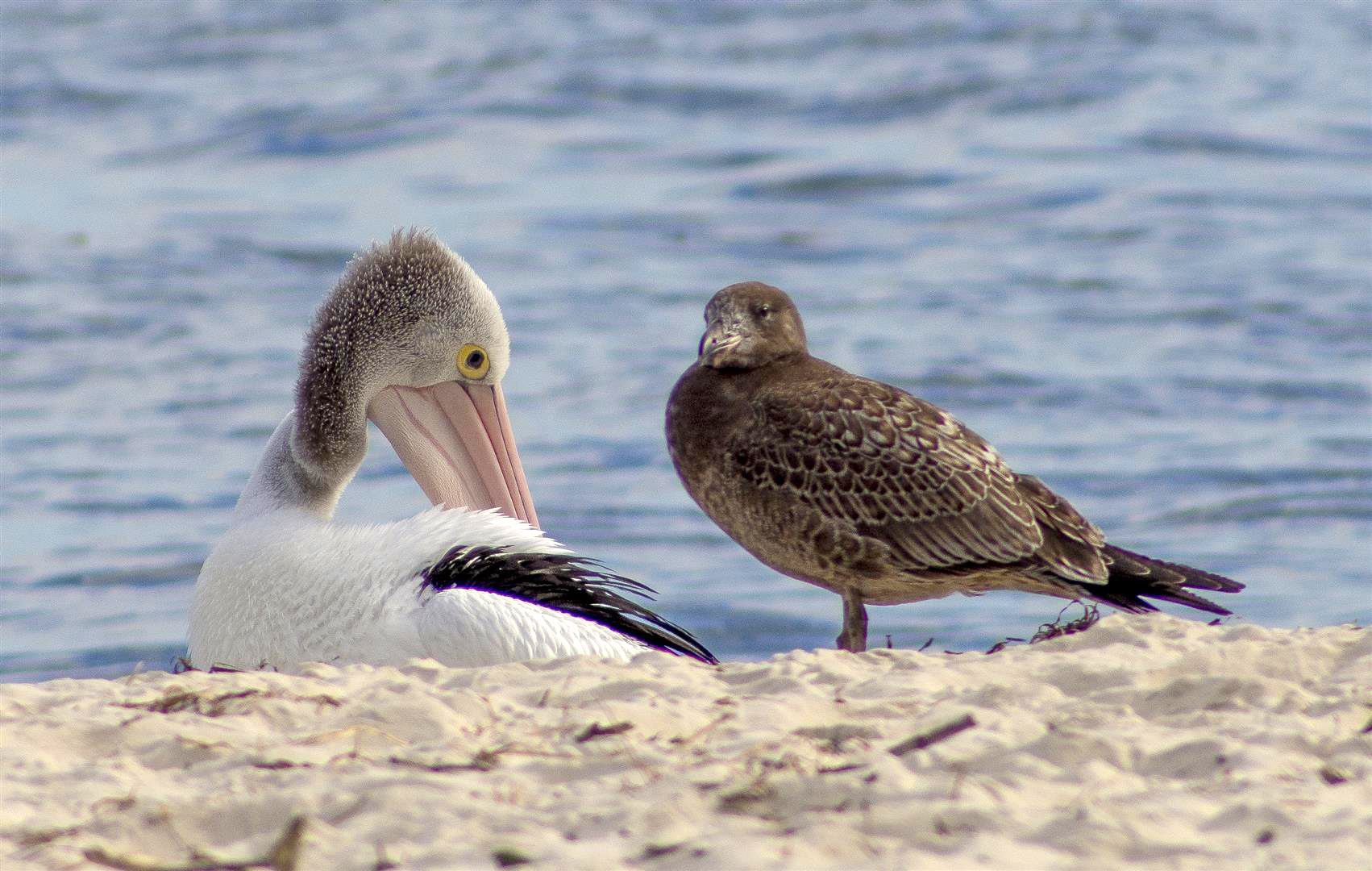 Pacific Gulls feed on fish and squid caught at sea, crabs and sea-urchins plucked from reefs and beaches,  carrion and the eggs and young of other nesting birds such as gannets, shearwaters and petrels. Their flight is described as “graceful and leisurely, on deeply and slowly beating wings, broken by majestic soaring.” 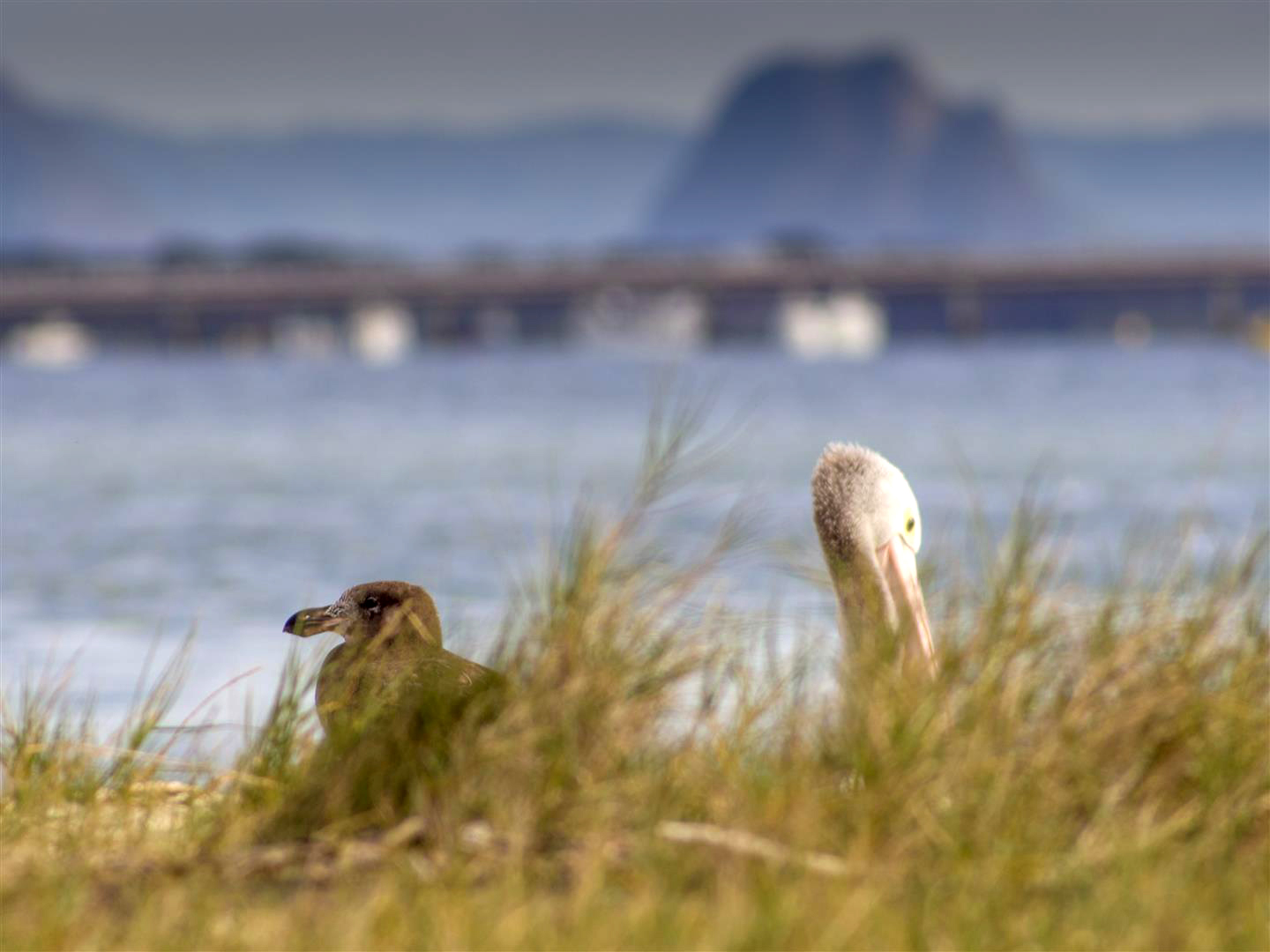 The Glasshouse Mountains can be seen beyond the Bribie Island bridge. 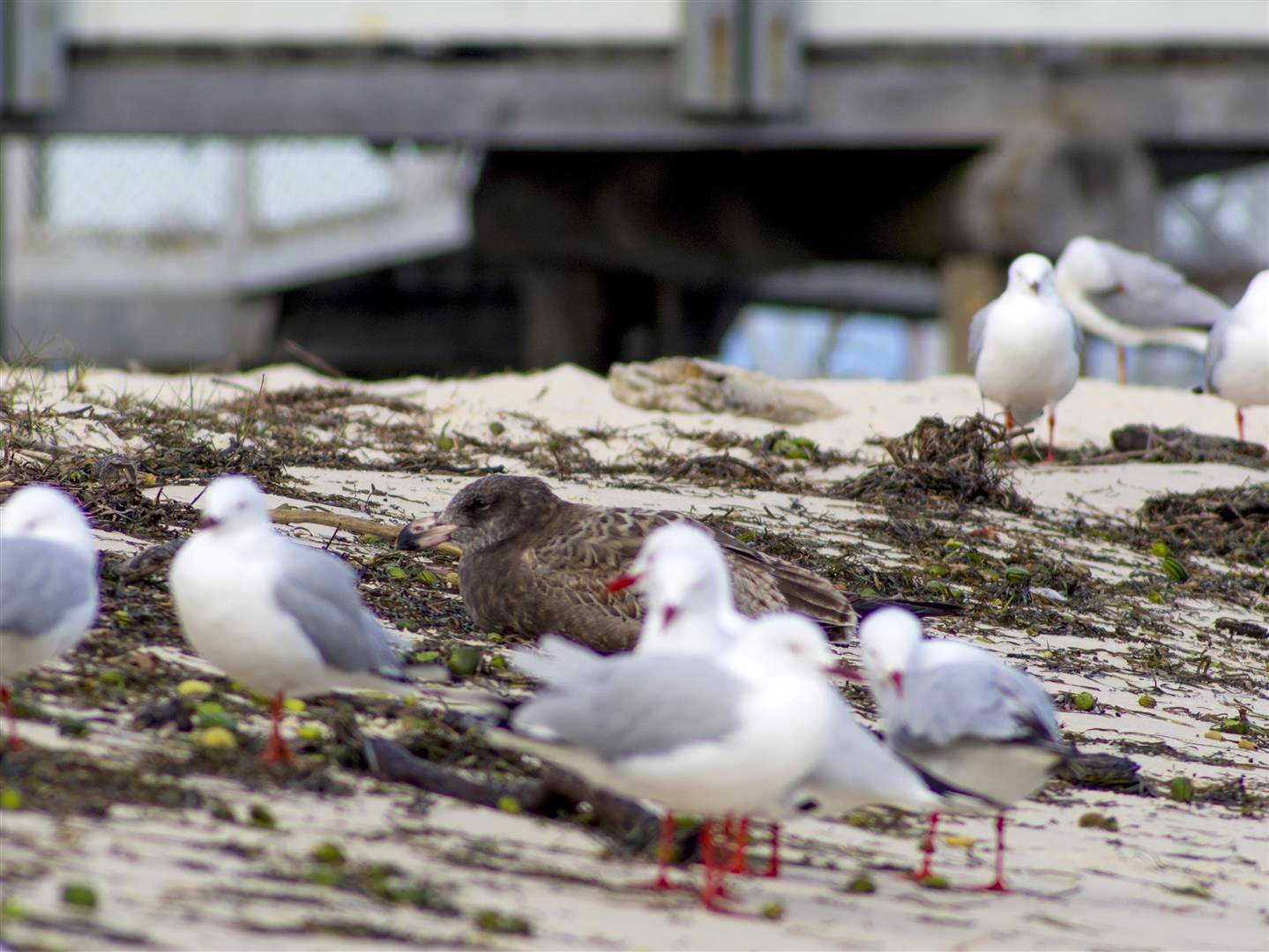 A Pacific Gull sleeps among a flock of Silver Gulls. 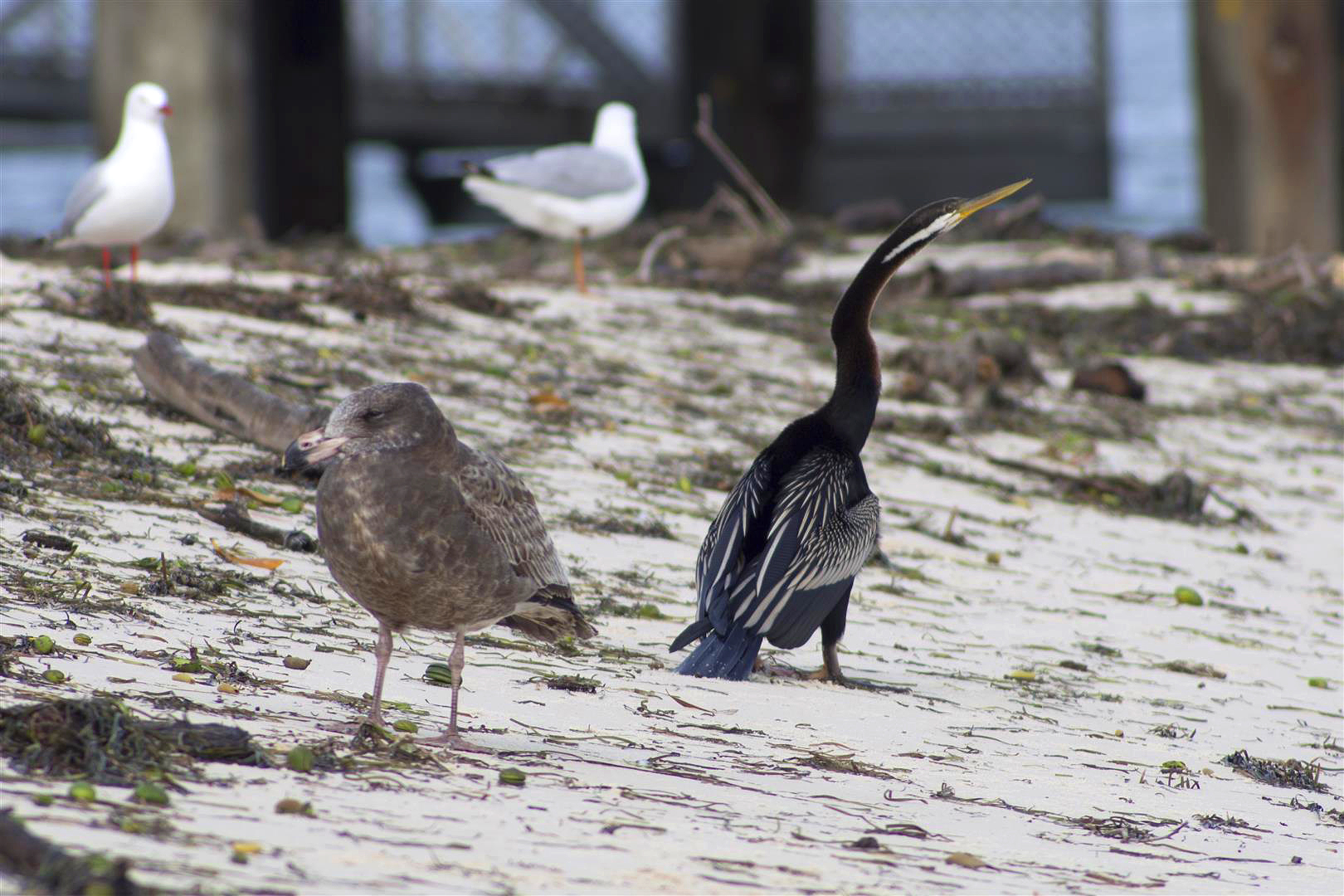 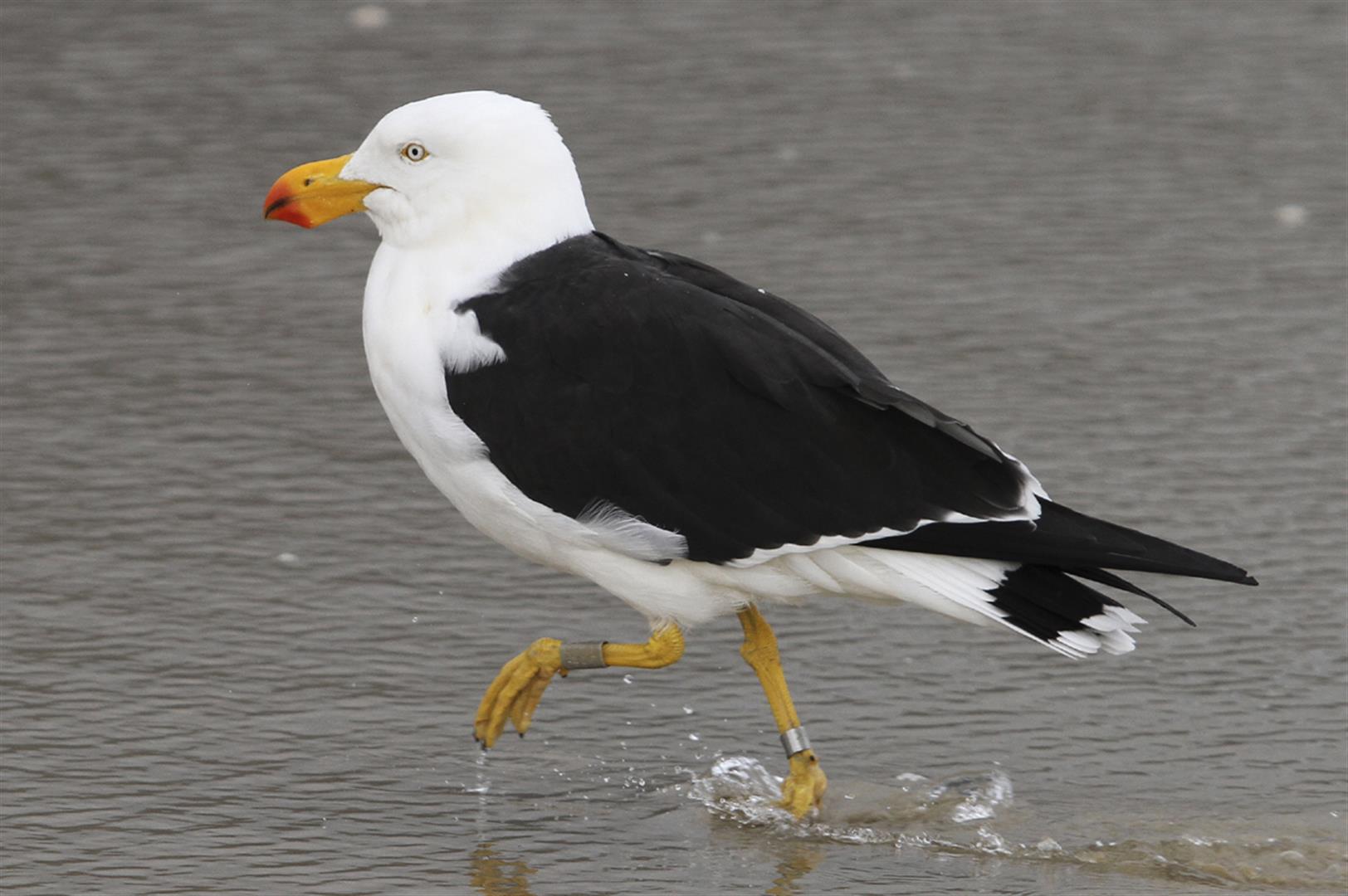 An adult Pacific Gull is a pretty stunning character. Check that bill! Bird photographed at Wilson’s Promontory by Ross Naumann.