Why not complicate things? Suffering from a bad cold and recovering from a painful back, I go walking late on a Friday afternoon. It’s complicated because I’m keen to photograph some birds, but have a dog and a lad with a scooter along. Recreational conflicts abound, with the dog being the least interested in birds, other than to chew on them. The lad is resigned to my distractibility (is that a word?) when birds are about — a pair of soaring Peregrines just slow us down and the dog can’t even see them.

Lurking among the Camphor Laurels, trying not to be noticed. A flock of White-headed Pigeons (Columbia leucomela) in a Toowoomba street. Described as “among the wariest and most secretive” of rainforest pigeons, they can be seen near cars and off-leash dogs in suburban Toowoomba. All photos R. Ashdown.

Down at the park again. For months now I’ve been spotting White-headed Pigeons around Queens Park in Toowoomba, and lately there has been a large group of these native rainforest fruit pigeons feeding on the fruit of ornamental Camphor Laurels.

These are wary, nervous birds, and my previous attempts to get close with a little compact camera have been a dismal failure. The birds arrive early morning and late afternoon, adjacent to a road and near the dog off-leash area. As a result they are often disturbed, but seem content to wait for a while before returning to their meals. I sneak up slowly with an SLR and grab a few images. 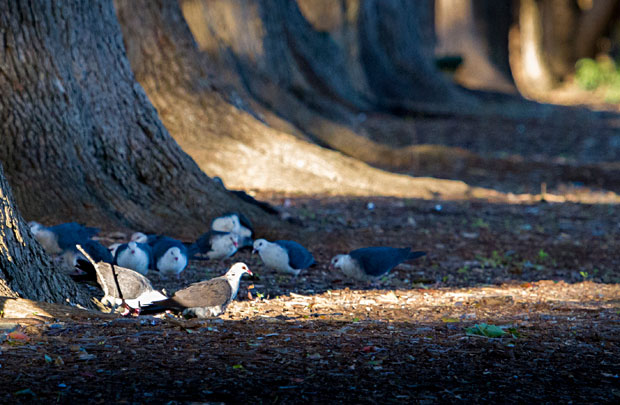 Keeping one eye out for trouble. White-headed Pigeons (also known as Baldy Pigeons) are one of Australia’s 22 native species of pigeons. While they are mainly fruit-eaters, they are related closely to rock doves. These birds are found down the east coast of Australia, usually in rainforest and wet eucalypt forest. 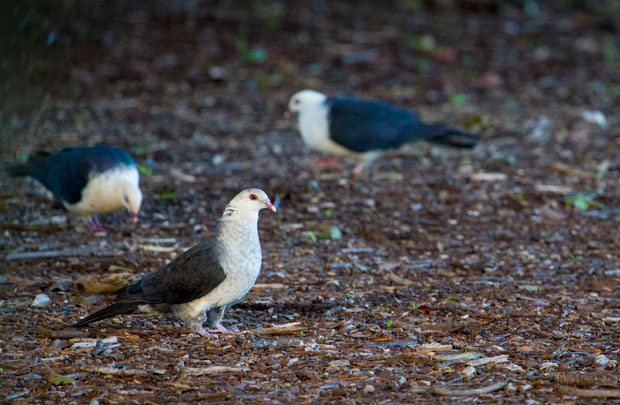 Once threatened in Australia by land-clearing, these pigeons have made a recovery since Camphor Laurel  became a popular shade and street tree. Their numbers have increased and they are now seen in towns such as Toowoomba. An introduced plant may have its occasional good sides. 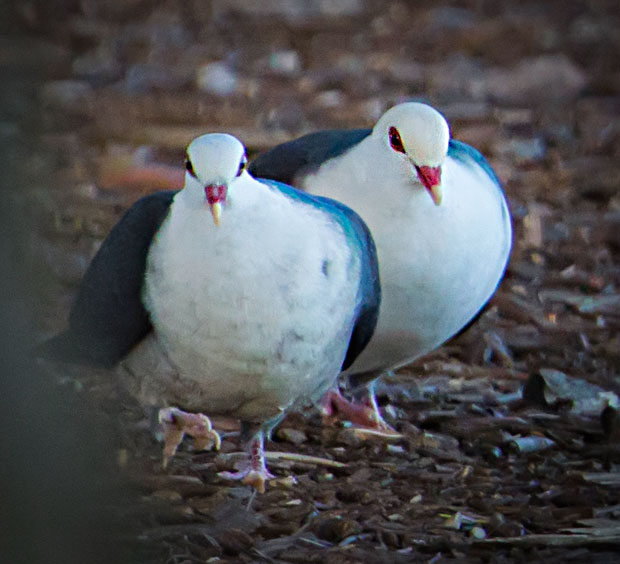 In rainforest or wet eucalypt forest these birds are hard to see, as they will sit quietly. They occur in pairs and groups of up to 15 birds. They are nomadic, and wander from place to place in search of ripening fruit, although in some areas their numbers seem to stay constant. 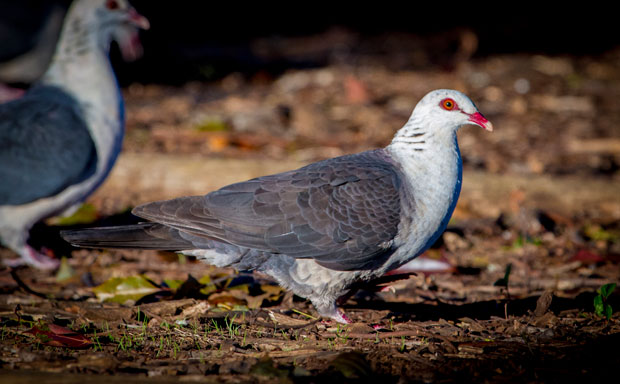 A female White-headed Pigeons is a duller and greyer bird than the male. 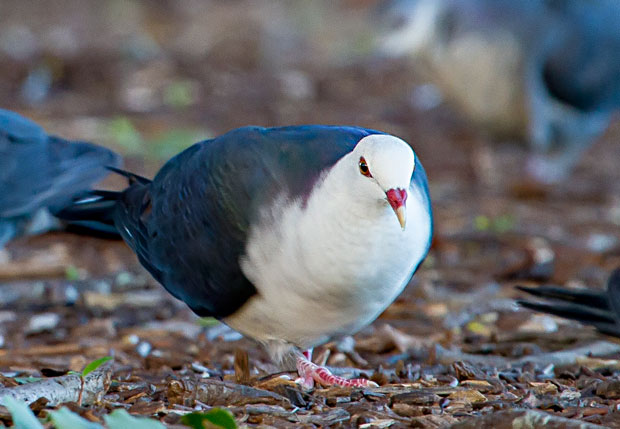 White-headed Pigeons breed at any time of year, but usually between September and March. The males perform a spectacular display flight, as they move in an undulating fashion above their territories, while on the ground they carry out a distinctive bowing. 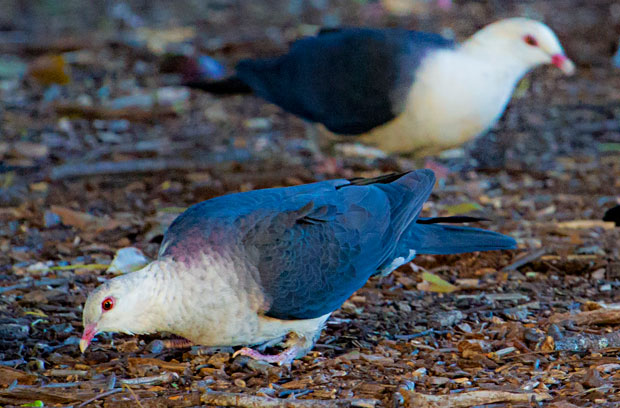 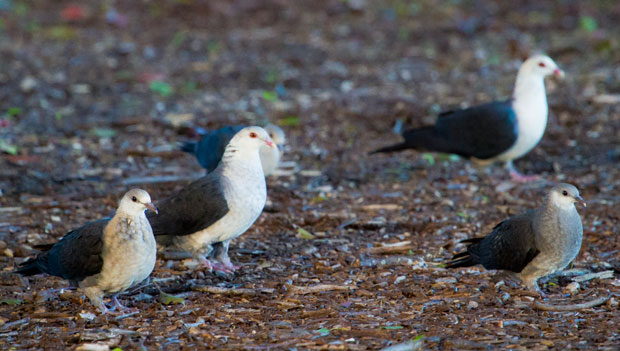 The two immature White-headed Pigeons seen here in the foreground have a grey crown, nape and breast, as well as darker eyes. 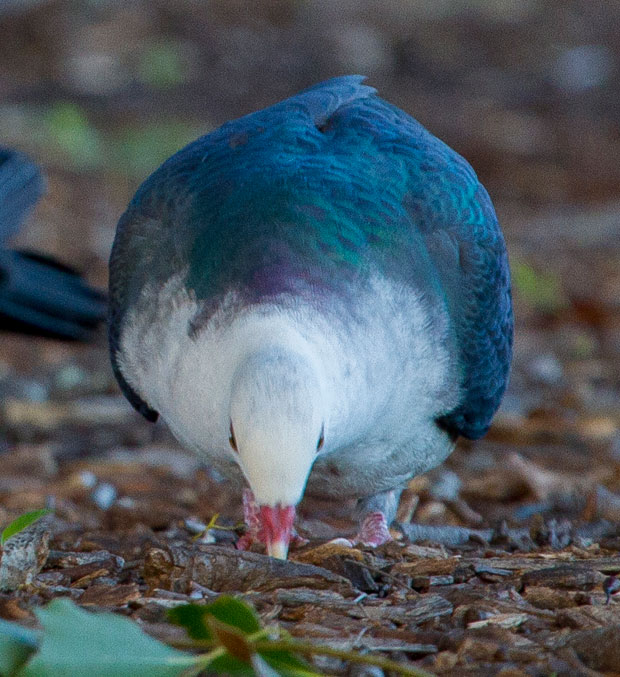 Beautiful shades of blue can be seen on the back of this specimen. 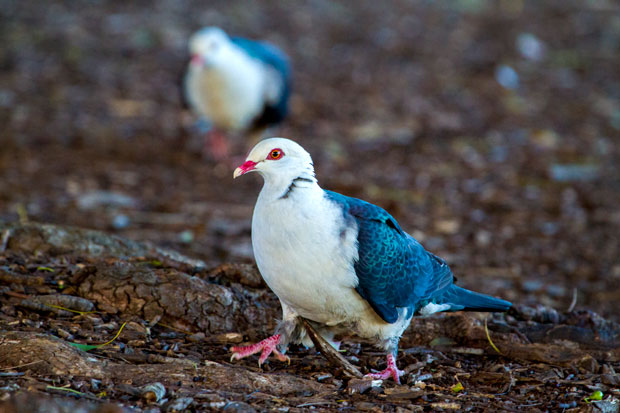 Spotted — moments before this bird took off. It soon returned.

Thanks to Harry for looking after the dog while I raced off with the camera.

UPDATE 6/1/2013
Dr Bill McDonald, Principal Botanist of the Queensland Herbarium, wrote to let me know that unlike Top Knot Pigeons, White-headed Pigeons destroy the seeds of camphor laurels when they ingest the fruit.

“Thus, I’m always happy to see them around the camphors, especially in areas we are trying to regenerate,” he says.

White-headed Pigeons on the web: 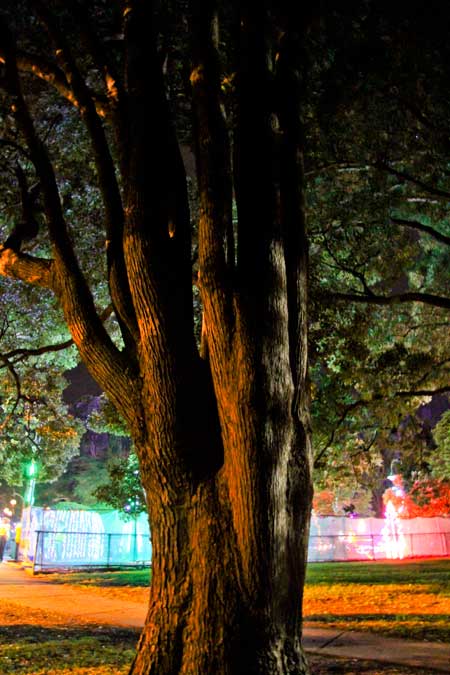 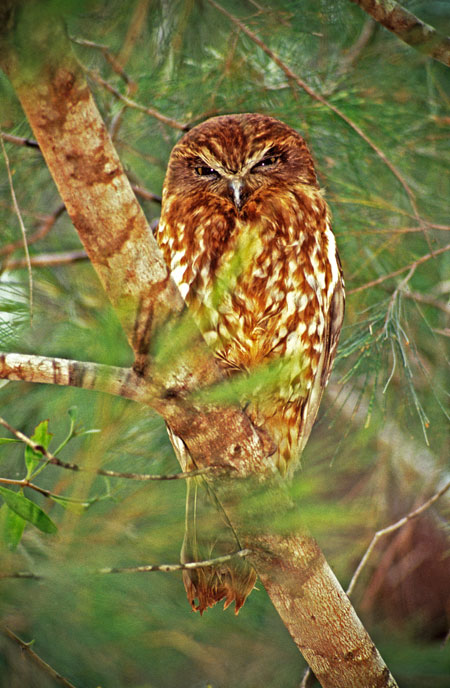