The island paradise of Minjerribah (North Stradbroke Island) has been the ancestral home of the Quandamooka People for many thousands of years. 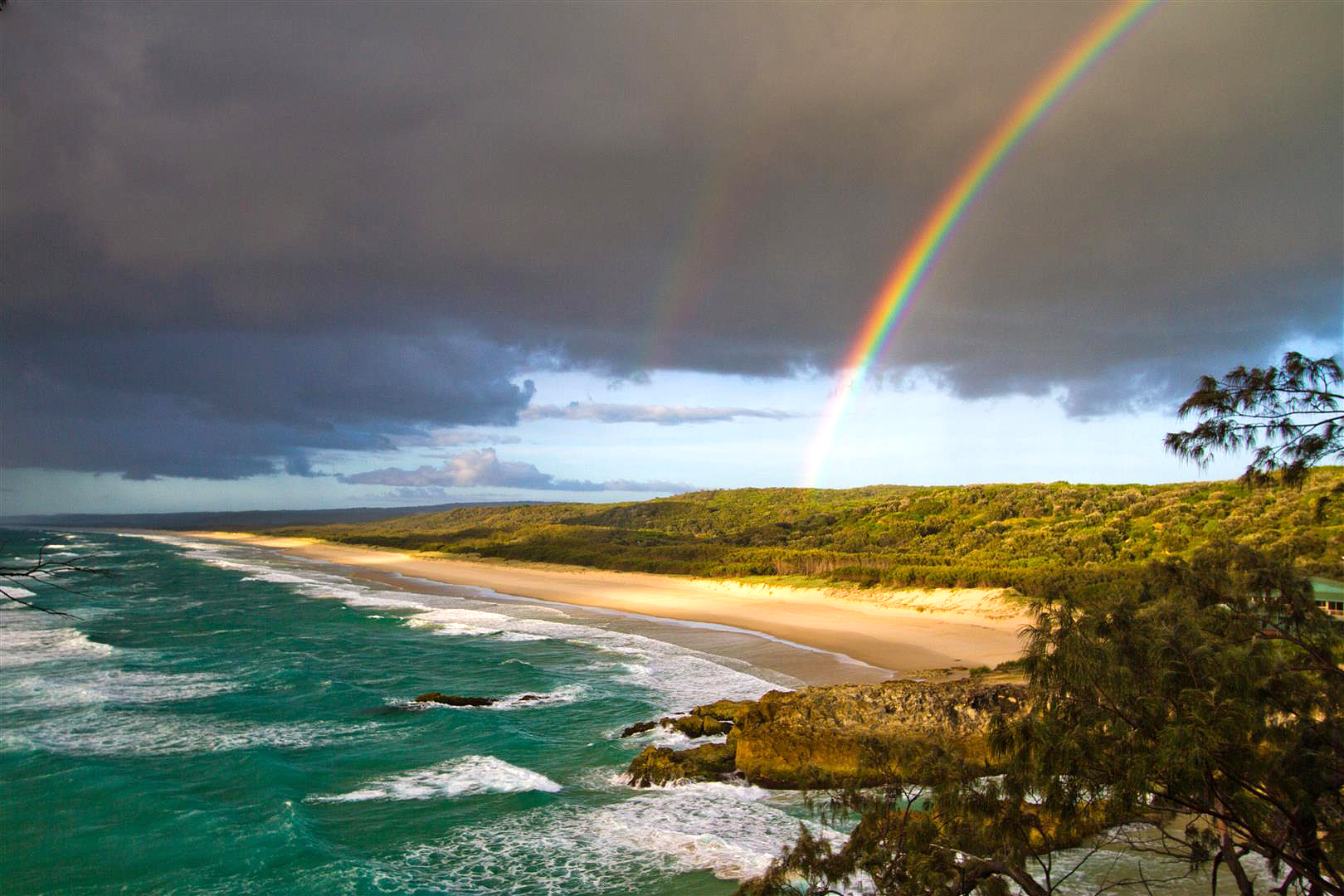 Lying just across Moreton Bay from Brisbane, Minjerribah is well-known for its magnificent beaches and spectacular Humpback Whales, which often swim close to shore.

However, there is much more to this ancient sand island’s unique wildlife and ecology, as a newly published field guide illustrates beautifully. 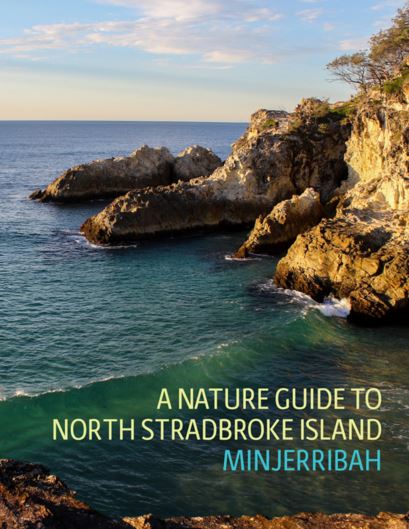 The Friends of Stradbroke Island aims to protect and help restore the natural environment of Minjerribah and its surrounding waters. Preserving the full range of habitats of the island’s native species, including rare and  endangered plants and animals, is a major goal. FOSI recognises the custodianship of the island’s Quandamooka People and aims to work positively and cooperatively with Minjerribah’s Traditional Owners in pursuit of its environmental goals.

I’ve visited North Stradbroke Island many times, and have always returned to the mainland full of wonder for this stunning place, so close to one of Australia’s largest cities.

In 1979 I walked with two friends from Dunwich south through the middle of the island — passing by large areas torn asunder by sand-mining, hiding from mining vehicles on sandy tracks, walking through spectacular swamps and sleeping under huge scribbly gums. Great memories.

Me, lost somewhere in a swamp and loving every minute, North Stradbroke Island, 1979.

Looking south-east from North Stradbroke back to Lamb and Russell islands, and the distant Border Ranges, 1979.

I’m happy to have been able to assist the Friends of Stradbroke Island in a small way through contributing some of my photos for this field guide. I applaud this group’s important work, which you can find out about here.

A few of my fave Minjerribah images (click on any pic for a closer look). 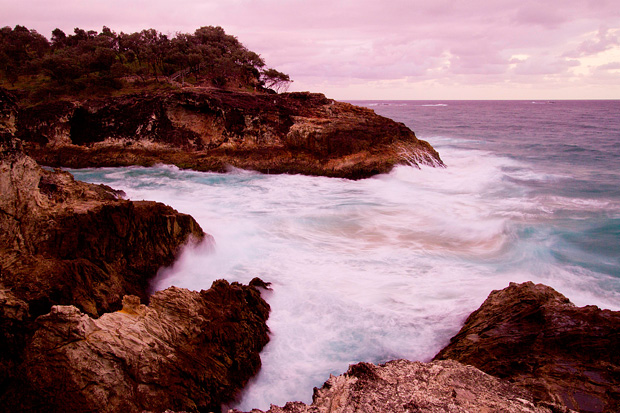 Point Lookout, North Stradbroke Island. At 38km long and 12km at its widest point, “Straddie” is the second largest sand island in the world. A diverse range of habitats on the island support a rich variety of fauna and flora.

Migratory birds seek perpetual summer. However, this is at the cost of repeated punishing ordeals which many of them do not survive. Now they prepared to take wing, not as raptors, gliding are carried on the high, warm currents of the great thermals but as small migrants, storm baffled, frozen, forced down towards demented waves, must pit themselves – perpetually – against nature. Caroline Lassalle, ‘Breaking the Rules’

Mark Simmons and I recently made an all-too-brief working visit to North Stradbroke Island. Driving the beach we noticed many Short-tailed Shearwaters (Ardenna tenuirostris), aka Muttonbirds, washed up dead on the beach.

Local naturalist Michael Hines has been observing this event, and along with Dave Stewart from the Queensland Parks and Wildlife Service, has been interested in estimates of dead bird numbers, and seeking out information on the causes. Stradbroke photographer Glen Caruthers counted 1 carcass every 5 metres for at least 5km, and believed that the final number must have been considerable. 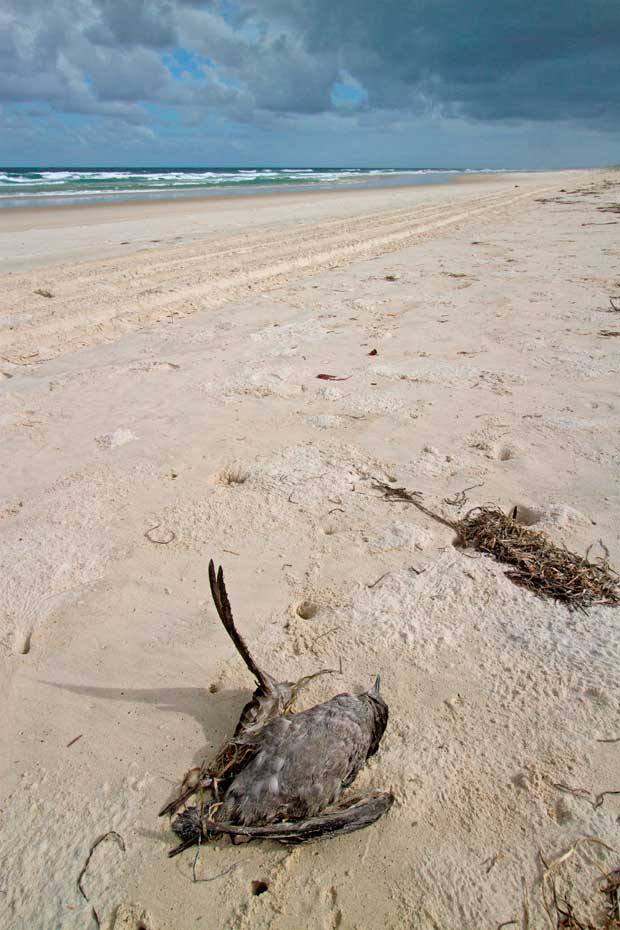 A beach-washed Short-tailed Shearwater, one of many on North Stradbroke Island’s surf beach.

Shearwaters have been turning up dead on many beaches down the east coast of Australia this month, even appearing on Sydney’s beaches. So what’s going on?

The Short-tailed Shearwater is a migratory species. There are an estimated 23 million of these birds, many of which breed on Australian islands in the warmer months. Between June and August the adults and young birds head roughly 9,000km north to feed in the North Pacific Ocean and Bering Sea. The route they take north and south has long been the subject of debate.

The regular passage of these birds back south along the east coast of Australia between October and January is spectacular, and in some years (such as this one), many perish and wash up on beaches. Such an event is known in bird circles as a ‘wreck’. The reasons for wrecks have been discussed at length, but it’s generally agreed that starvation and exhaustion, and the influence of storms and other adverse weather, are the causes.

Here’s what Birds Australia has to say on this latest ‘wreck’:

If the sight of a shearwater washed up on the sand of a deserted beach is a forlorn one, the sight of hundreds of dusky, beachcast ‘muttonbird’ corpses is truly bleak.  In the past week or two, large numbers of dead Short-tailed Shearwaters have been reported washing up on a number of beaches in south-eastern Australia, along the coast from South West Rocks south to Nowra on the South Coast of New South Wales at least to Torquay on Victoria’s Surf Coast, with especially large numbers washed up on Wilsons Promontory, and doubtless elsewhere.

This type of event, known as a wreck, occurs periodically, usually in October or early November, soon after the birds have returned to Australian waters on their migration back from the northern Pacific Ocean. By the time they arrive back in Australia, the shearwaters have usually expended most of their energy reserves on the journey. When they reach south-eastern Australia, sometimes they encounter unusual sea-surface temperatures which may affect the availability of their main sources of prey, preventing them from foraging, and they become exhausted. If there are also adverse weather conditions at the same time, such as the southerly gales we experienced a week or two ago, many are unable to deal with the rough conditions due to their fatigue, and large numbers die and are washed up. Sometimes live birds are also washed up, and are too weak to head back out to sea.  (Shearwaters regularly cope with such gales when they are out at sea, but they are unable to survive their effects when they are starving and exhausted.)

The phenomenon of the shearwater wreck has been known since the 1850s, and they happen periodically. There was a major wreck in November last year, when tens of thousands of shearwaters were strewn along the coasts New South Wales, Victoria and Tasmania, and there was also another one in late October 2000.  There is nothing we can do to avert such catastrophes.

People who find dead shearwaters on the beach should check their legs for numbered metal bands, and all such finds should be reported to the Australian Bird and Bat Banding Scheme.  The information researchers can gain from this is crucial to building up a picture of the species’ biology and ecology.

A paper published in 2001 looks at ‘wrecks’ that occurred in the northern hemisphere in the late 90s, and discusses the fine balance between energy expended on these long flights and the need to find food during the flight and upon arrival at their destination or stopping-off points. Seasonal and annual variation in prey densities is thought to have an large effect on the birds during their migrations. [Thanks to Michael Hines for this link]. 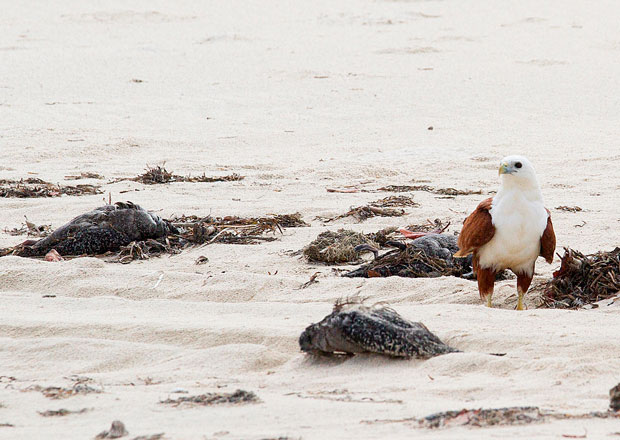 A Brahminy Kite close to the bodies of three Shearwaters.

On Stradbroke we were just wondering whether the local raptors would be taking advantage of this protein bonanza, when we noticed a Brahminy Kite feeding on them. We soon saw a White-bellied Sea Eeagle actually carrying off a dead Shearwater. 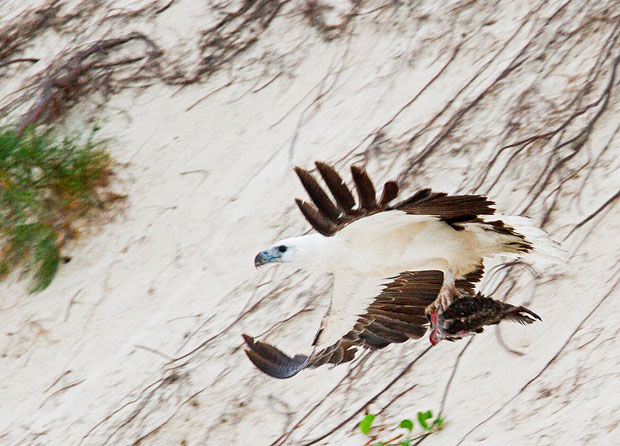 A White-bellied Sea Eagle carrying off a Shearwater carcass. 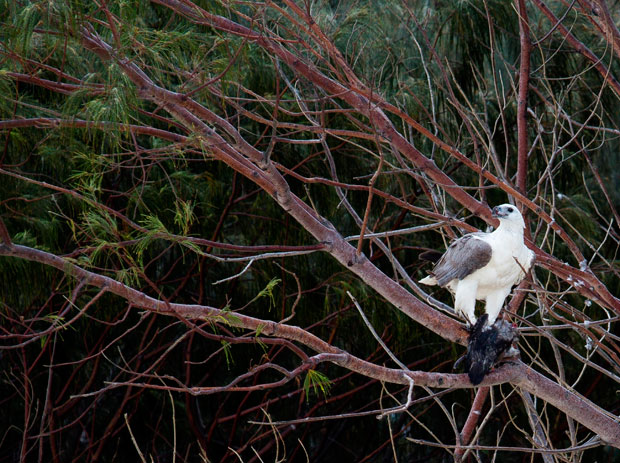 Clearly the dead Shearwaters are a protein bonanza for raptors. There were also local reports of foxes consuming the dead birds. 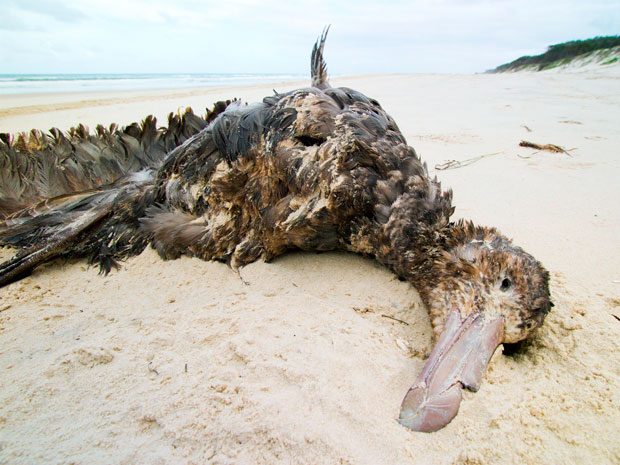 Beach-washed Northern Giant Petrel, a bird that breeds in the sub-Antarctic islands. 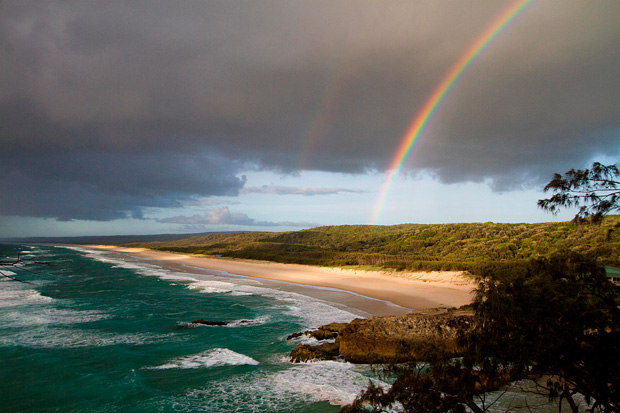 Stradbroke Island is a spectacular place, with locals and visitors alike transfixed by the place’s beauty and abundant wildlife.