Every year the cycads in a corner of Toowoomba’s Botanic Gardens attract small, beautiful pests. 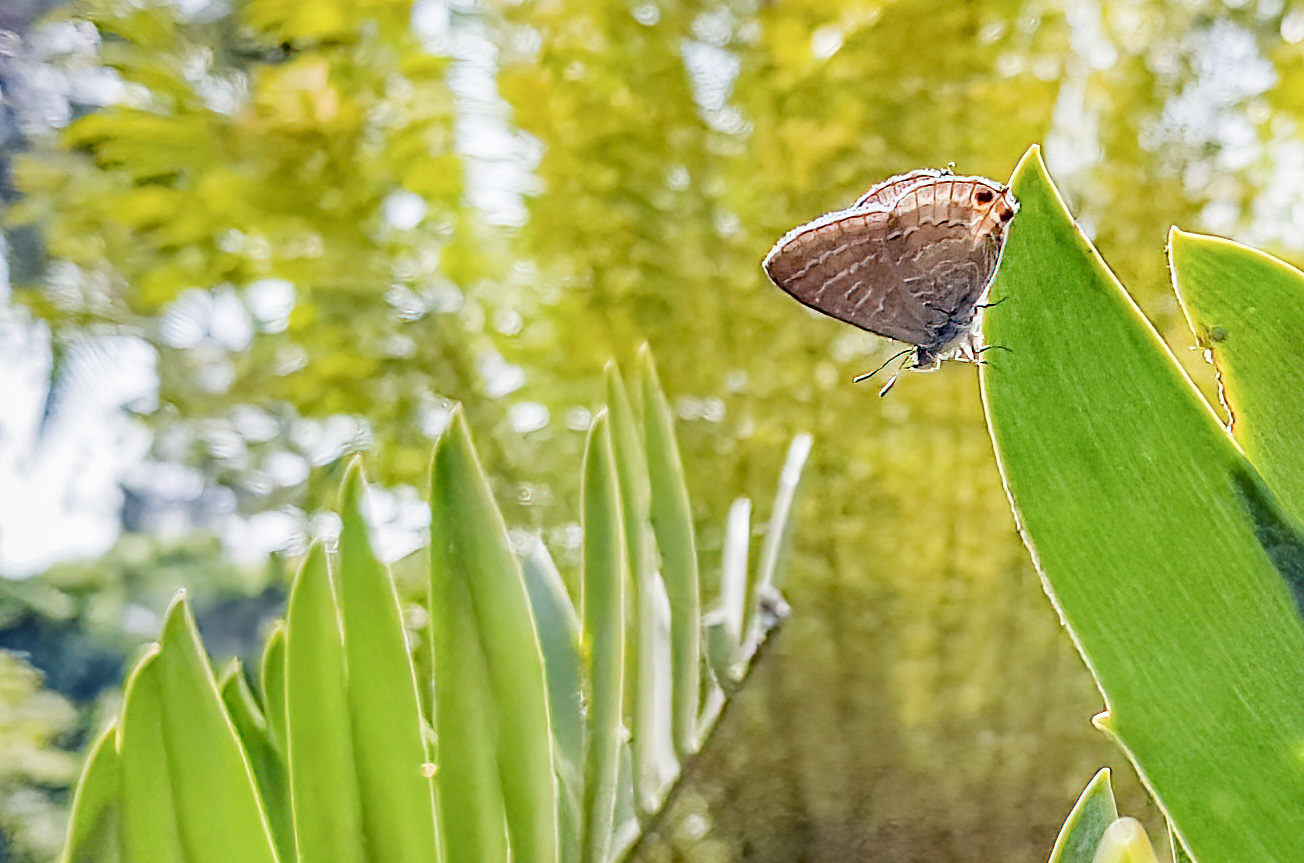 Cycad Blue butterfly preparing to go on a murderous rampage in the cycad section of the Toowoomba Botanic Gardens.

What exactly is a ‘pest’ species? Plant or animals that have been introduced, either deliberately or accidentally, to an area from somewhere else get the tag. Say, perhaps like when a dodgy wooden boat full of travel-weary northerners arrives uninvited at your place, a great southern continent, and everyone wants to hang around, well, forever. A refinement on the pest thing is the use of ‘invasive species’ — referring to those species that have ‘impacted the environment, often leading to declines in native species populations and the condition of ecological communities.’ Hmmmmm.

Native species can also be considered as ‘pests’, for reasons apparently real or just perceived. And a ‘pest’ may be in the eye of the beholder — consider the use of the word, often accompanied by terms like ‘plague’ or ‘infestation’, with flying foxes. These mega-bats are native species of incredible significance to the health of our forests, yet they often have incredibly negative interactions with humans.

A ‘native’ species transferred outside its natural range, or one that benefits in some way when the balance of things changes in an ecosystem, can end up being considered as a troublemaker. Native animals that cause havoc on our gardens can be regarded as real pests by keen gardeners. My mother-in-law, a wonderful and patient gardener, was outraged by the allegedly psychotic Australian Scrub Turkeys that seemed to enjoy destroying her garden. To her they were a real and present danger — and recriminations, and defenses, were the order of every day. The fact that this native bird species has flourished in the suburbs due to the work of such diligent gardeners and bush regenerators, who make the suburbs a better place to live for humans and other species, is a tad ironic.

To many gardeners the Cycad Blue (Theclinesthes onycha) — a small, beautiful, native butterfly — is a bit of a monster. ‘Pest of the Month’, ‘A Pretty Name for an Ugly Problem’ are a couple of webpage titles addressing this insect and the havoc it causes. Known to many gardeners, strangely, as the Grey Moth (perhaps to deliberately avoid drawing attention to this being a native butterfly, or maybe because most people think of butterflies as large bright insects), this insect is one of a group known as ‘blues’, butterflies that all belong to the family Lycaenidae.

The butterflies themselves are pretty, and gardeners may like the look of them. However, they are a problem. Looking more like a large moth than a butterfly, they can cause a lot of damage unless controlled. — Nurseries Online Australia 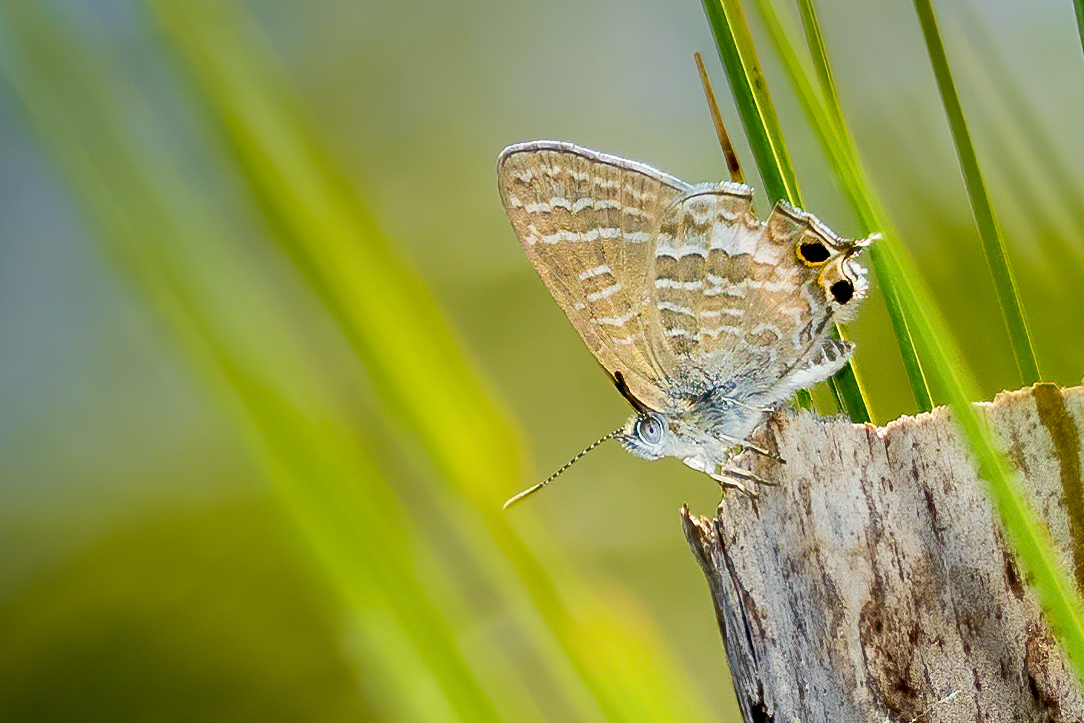 There are two subspecies of Cycad Blue butterfly (Theclinesthes onycha). Sub-species capricornia occurs along coastal Queensland from Cape York to about Mackay and Rockhampton, while onycha (seen in the photographs in this post) occurs from about Rockhampton to as far south as Mt Dromedary, near the New South Wales-Victoria border. The onycha sub-species is found along the coast and inland regions, as far west as Carnarvon National Park in Queensland, and Coonabarabran in New South Wales.

There are over 60 species of butterflies known as ‘blues’ in south-eastern Queensland, ranging in size from 14 to 53mm in wingspan. The common name comes from the iridescent blue scales on the upper wings of many in the group (others have iridescent scales of copper, orange or purple). Some species have a symbiotic relationship with specific species of ants. Like many butterflies in the family Lycaenidae their larvae are often attended by ants. The ants provide protection for the larvae in exchange for the sweet fluid exuded by the butterfly larvae. 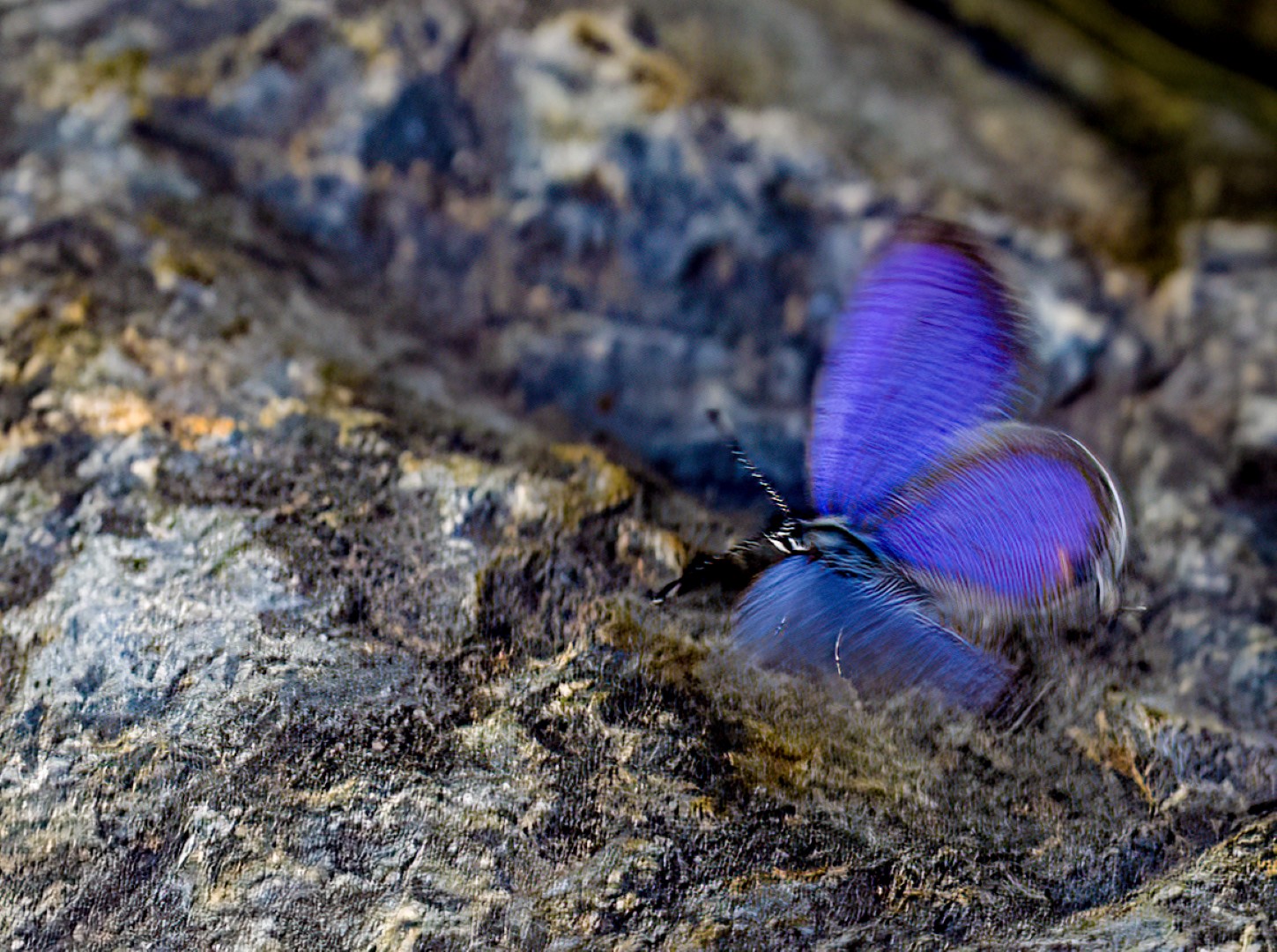 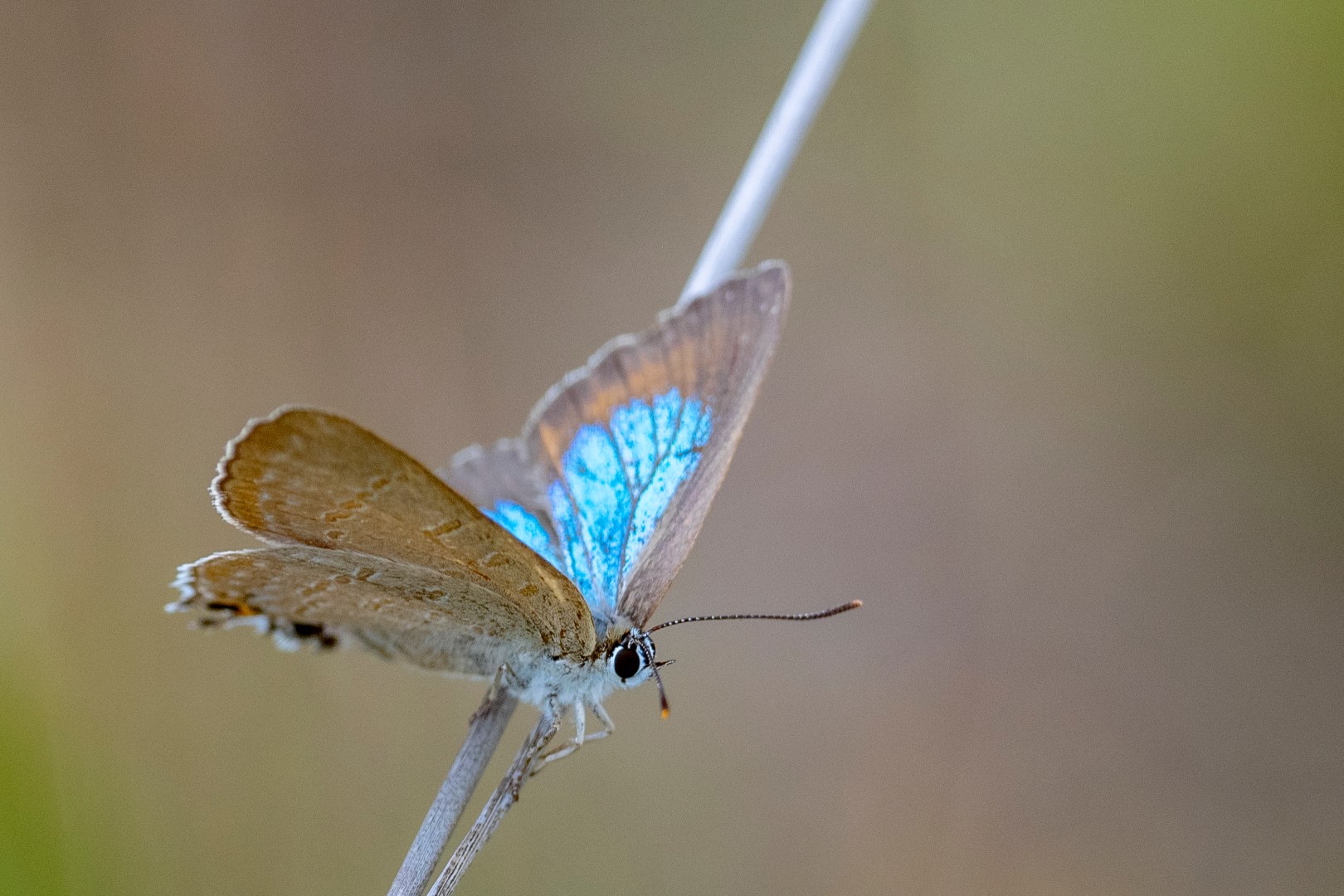 The Cycad Blue is just one of over 60 varied, often beautiful, species in the family Lycaenidae — the ‘blues’. This Emerald Hairstreak (Jalmenus daemeli), at rest with open wings, reveals the iridescent blue scales on the upper wings that give this group its name. Unlike the Cycad Blue, larvae of the Emerald Hairstreak feed on the foliage of acacias and eucalypts. 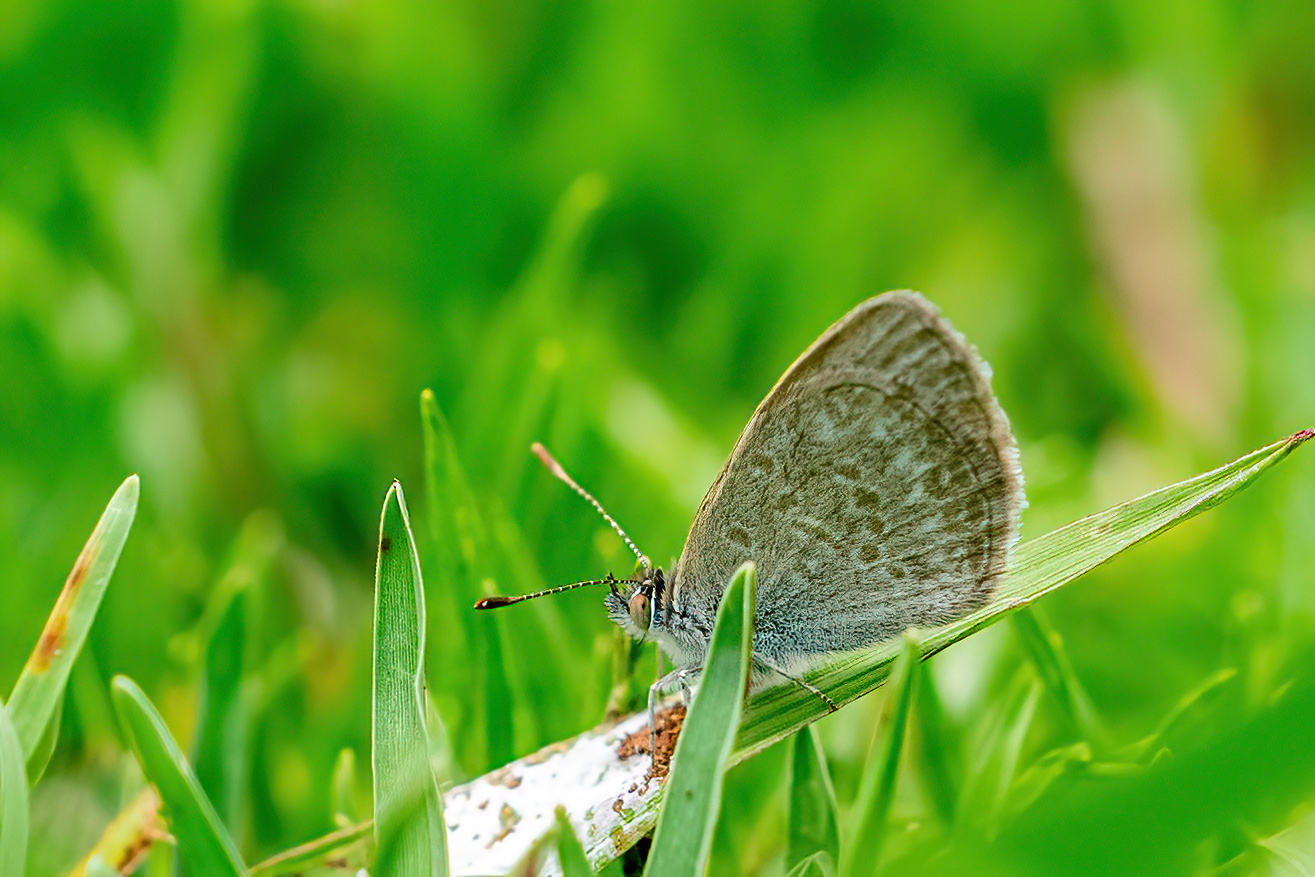 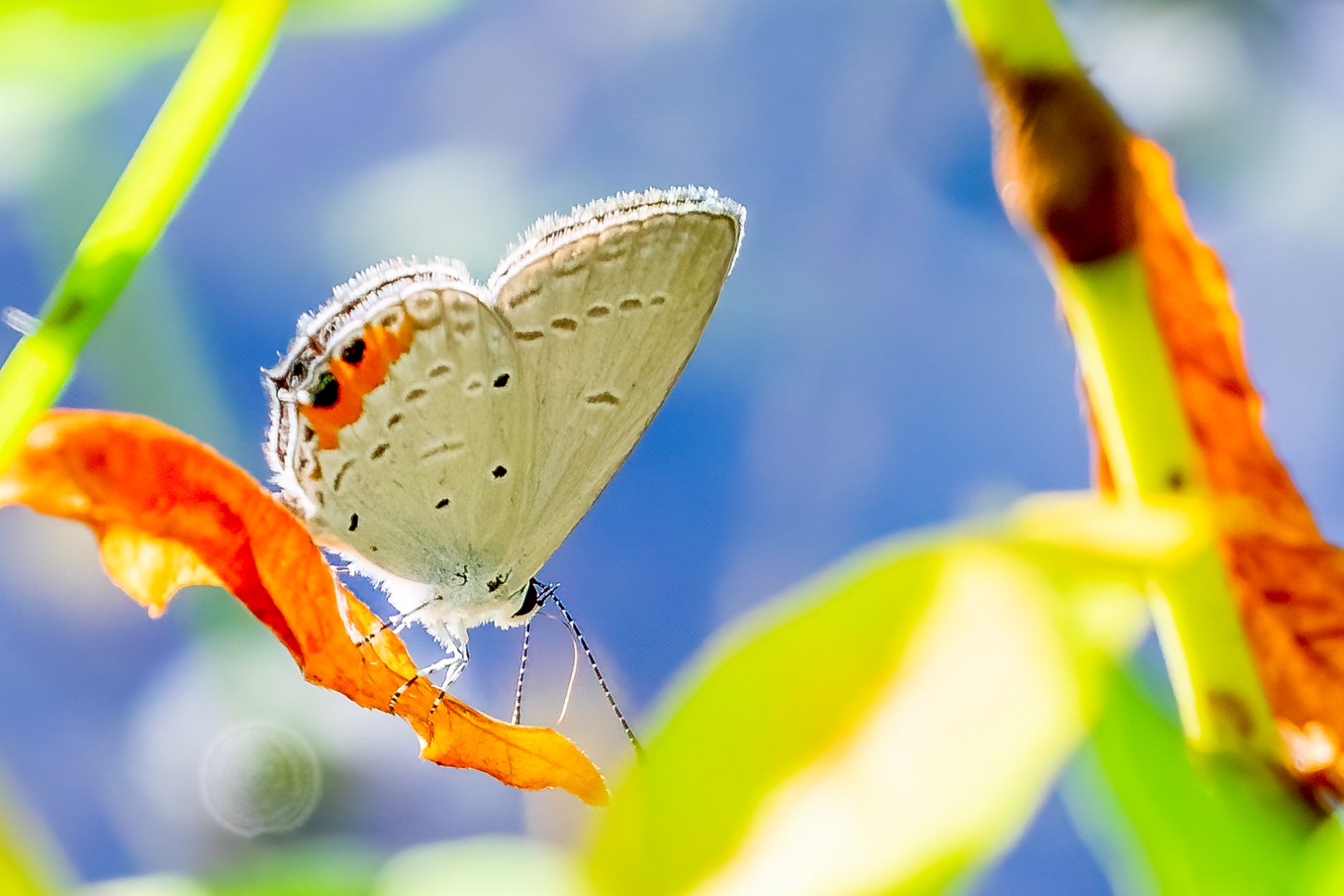 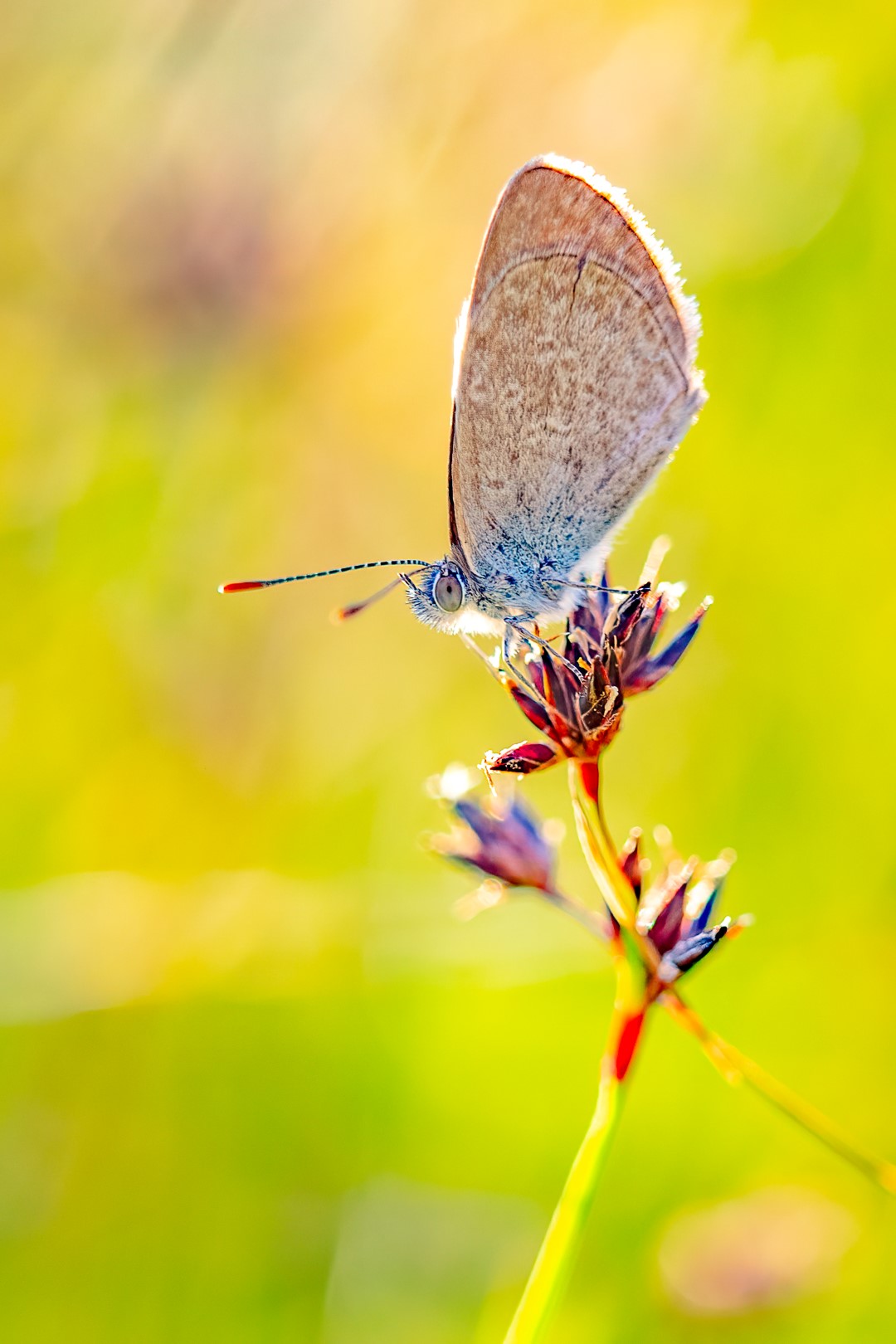 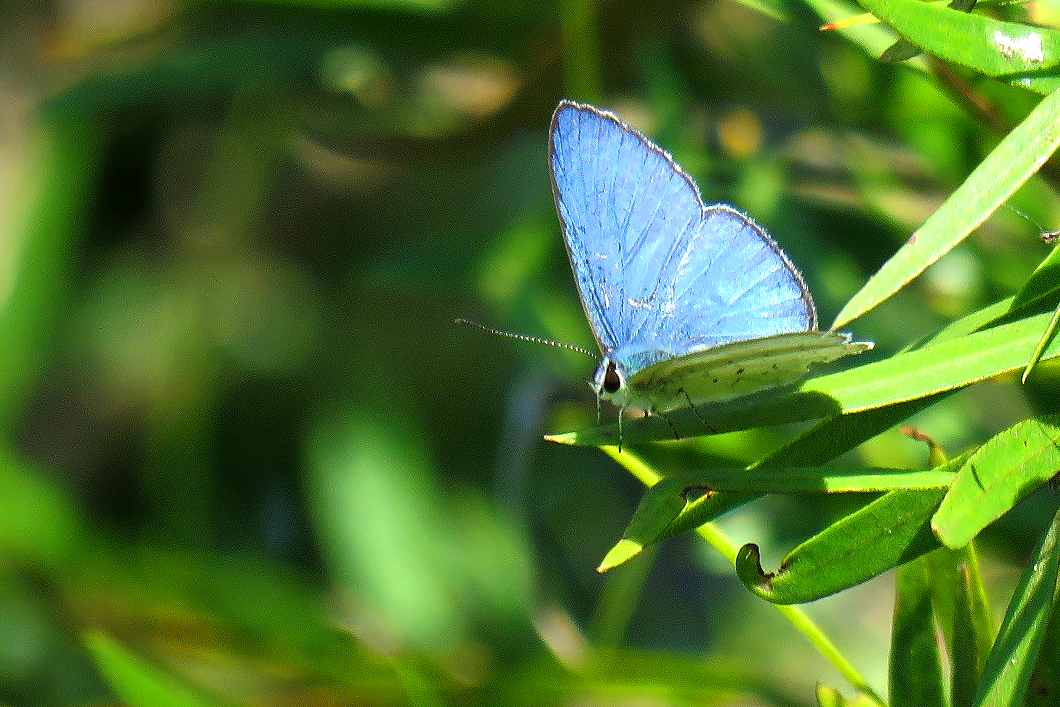 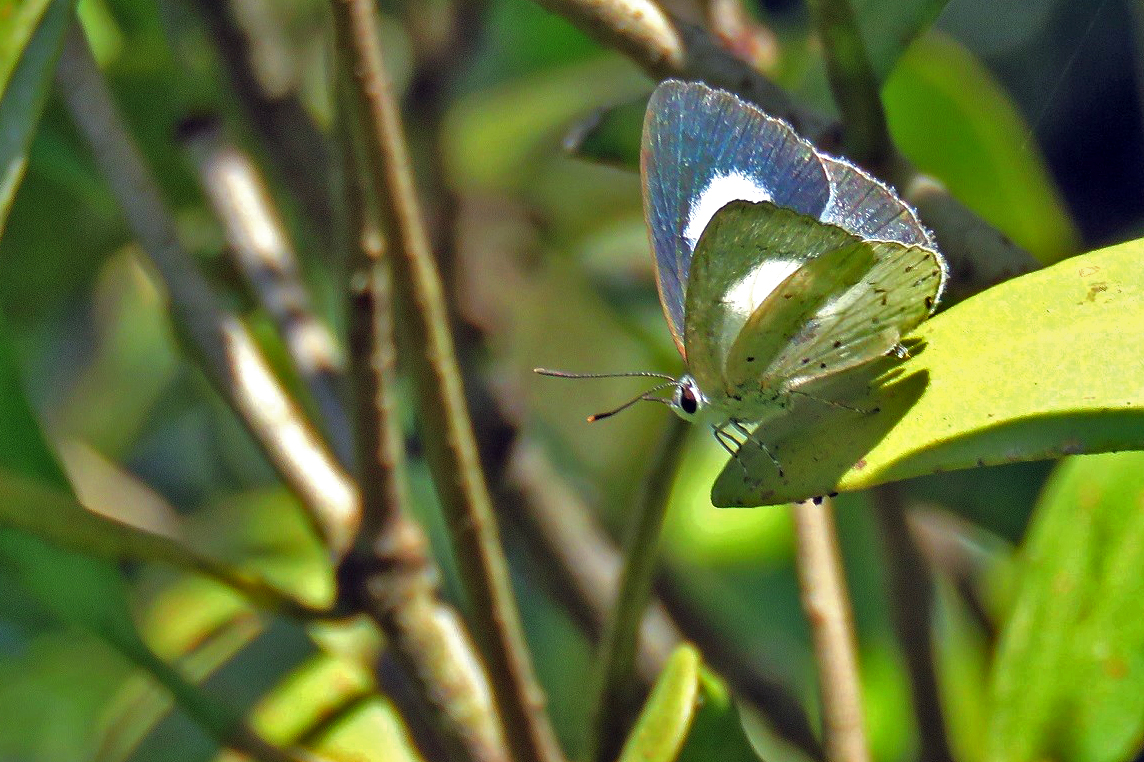 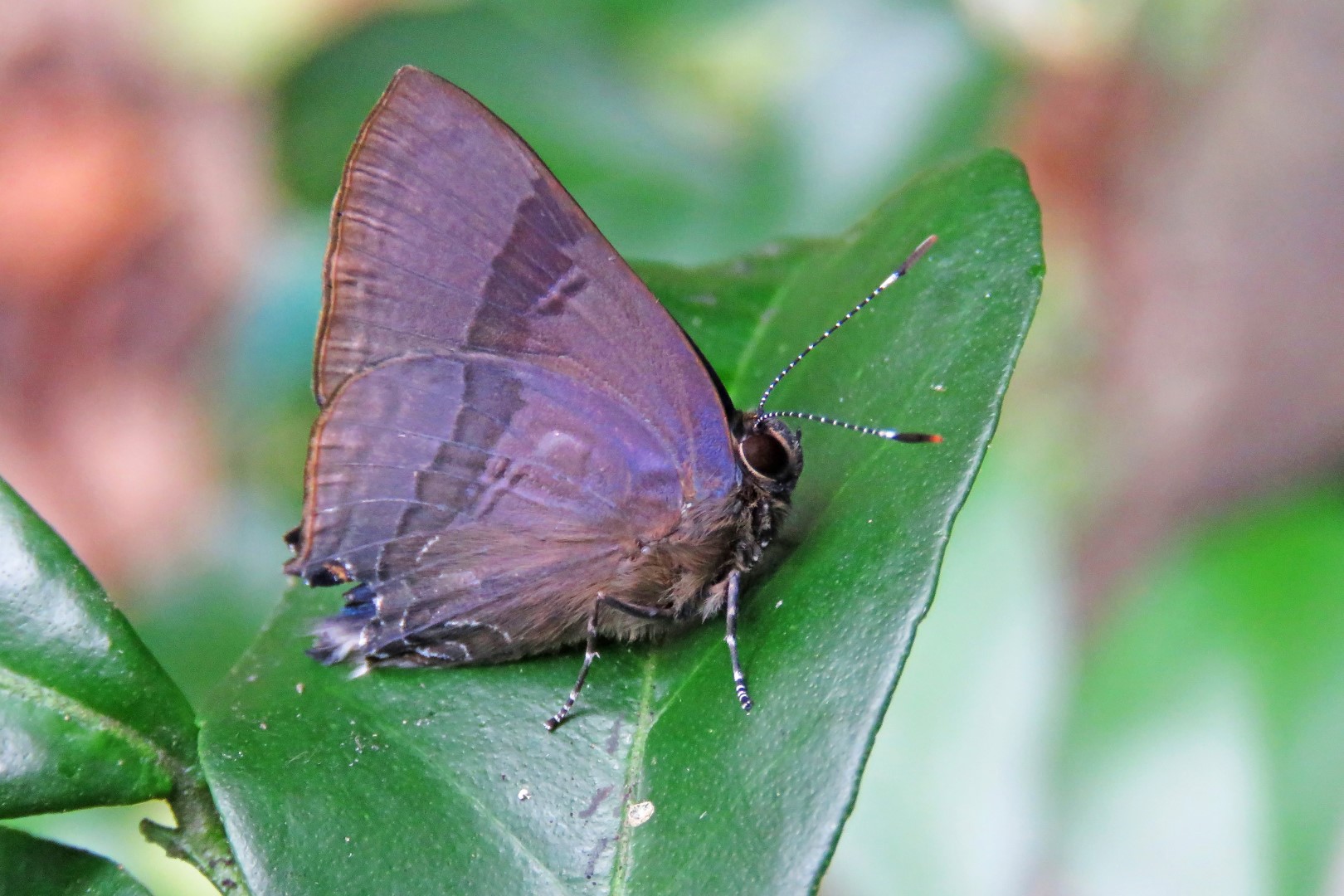 The Cycad Blue is the only butterfly in Australia whose larvae feed on cycads or any other Gymnosperm (cone-producing plants including conifers, ginkgos and cycads). The butterflies, seen fluttering around cycads in spring, lay their eggs in the newly emerging crown of the plant before new fronds grow. The eggs hatch within several days and the caterpillars immediately start eating the new foliage as it unfurls, only eating the soft new foliage for several weeks before it hardens up. This causes the fronds to appear brown and scorched, an undesirable look if you are a gardener. Large numbers of the caterpillars can cause a complete loss of leaves. As cycads do not produce foliage continuously, the plants don’t regenerate until the following year — they do recover, but this is an annoying event for gardeners and can indeed be quite a serious economic problem for horticulturalists. 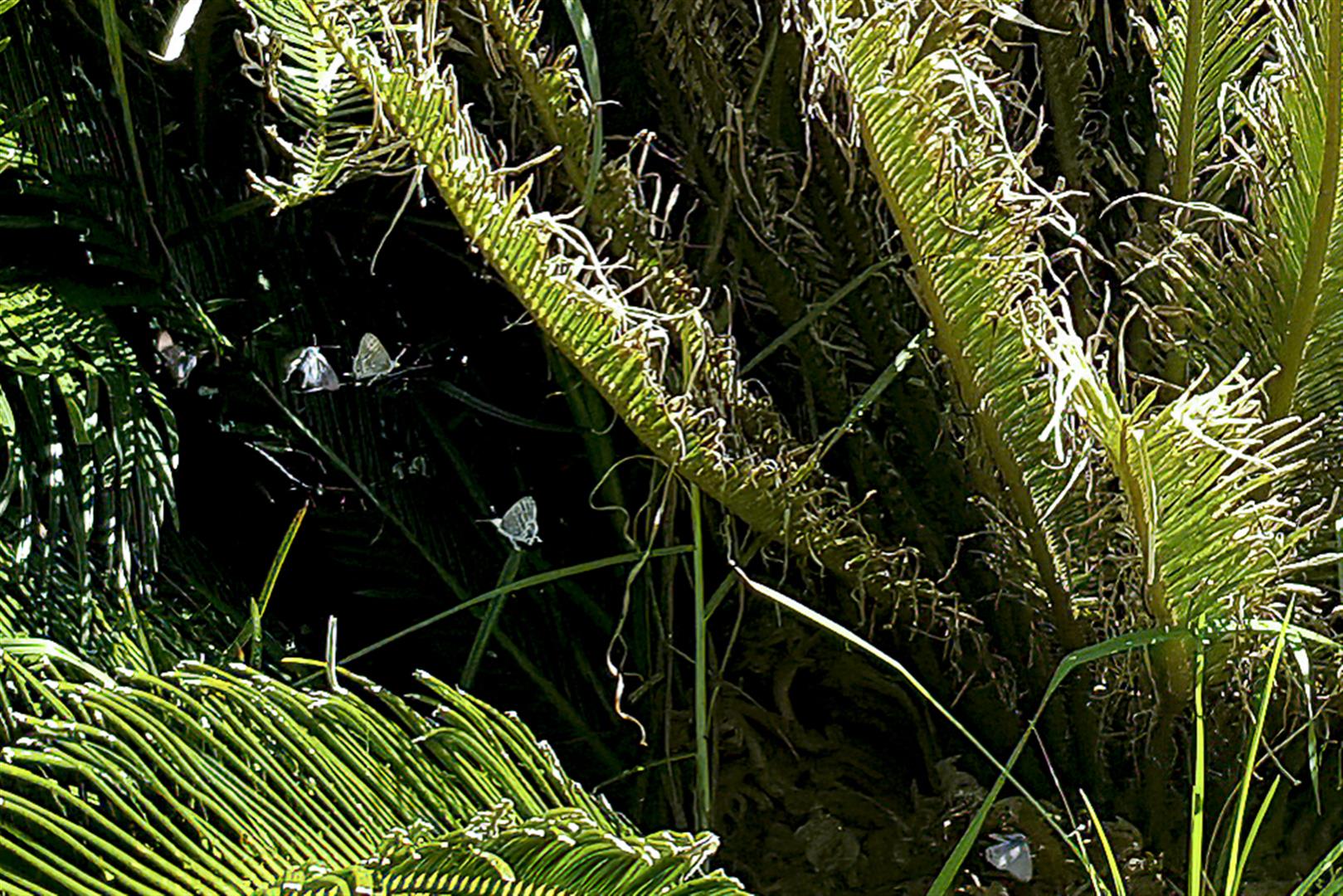 Cycad Blues flutter around a cycad on a sunny day — battling over territory and laying eggs on the plant. 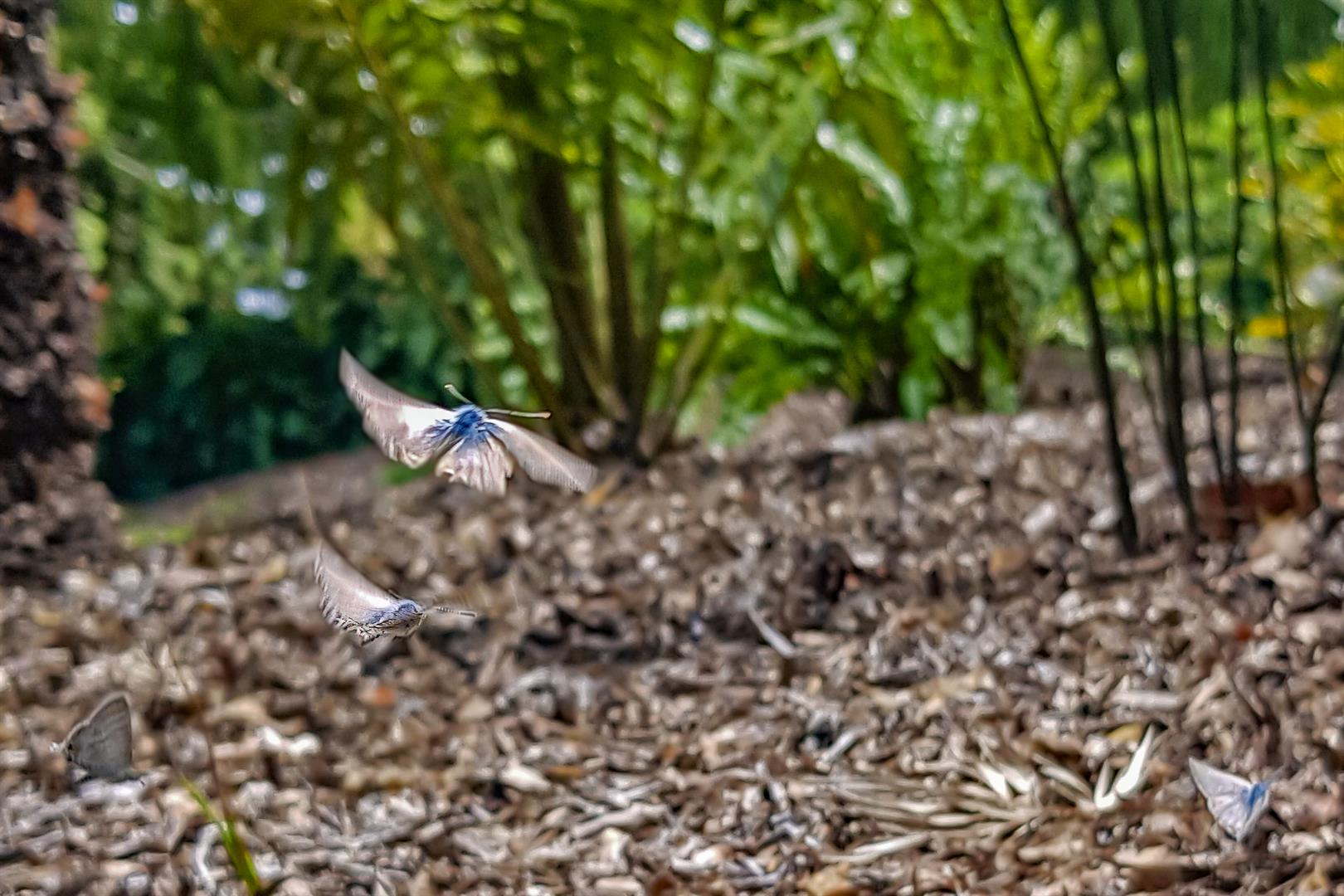 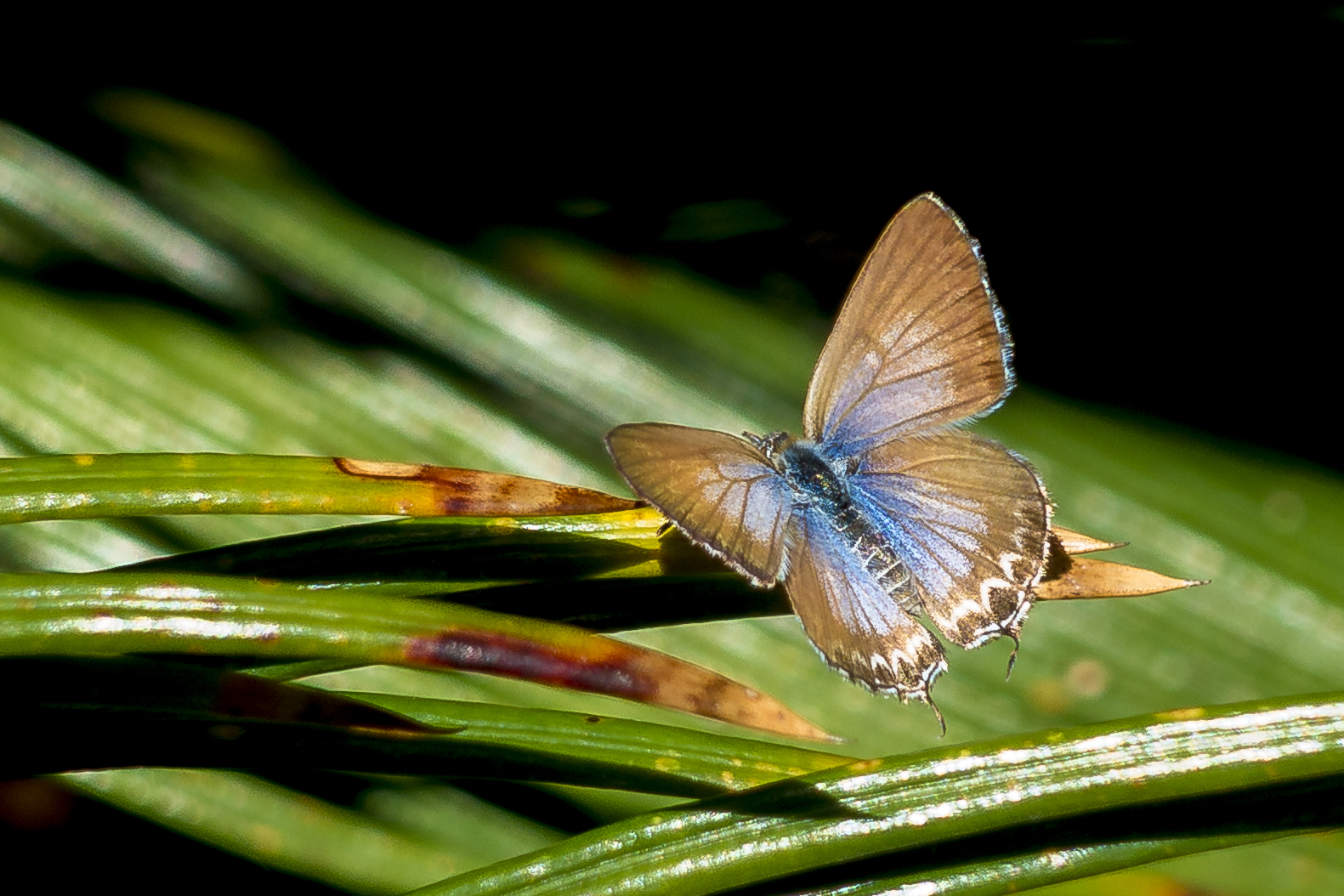 Cycad Blue on a cycad leaf. All parts of cycads are toxic, but the seeds contain higher amounts of cycasin (a carcinogenic and neurotoxic glucoside) than do the other parts of the plant. 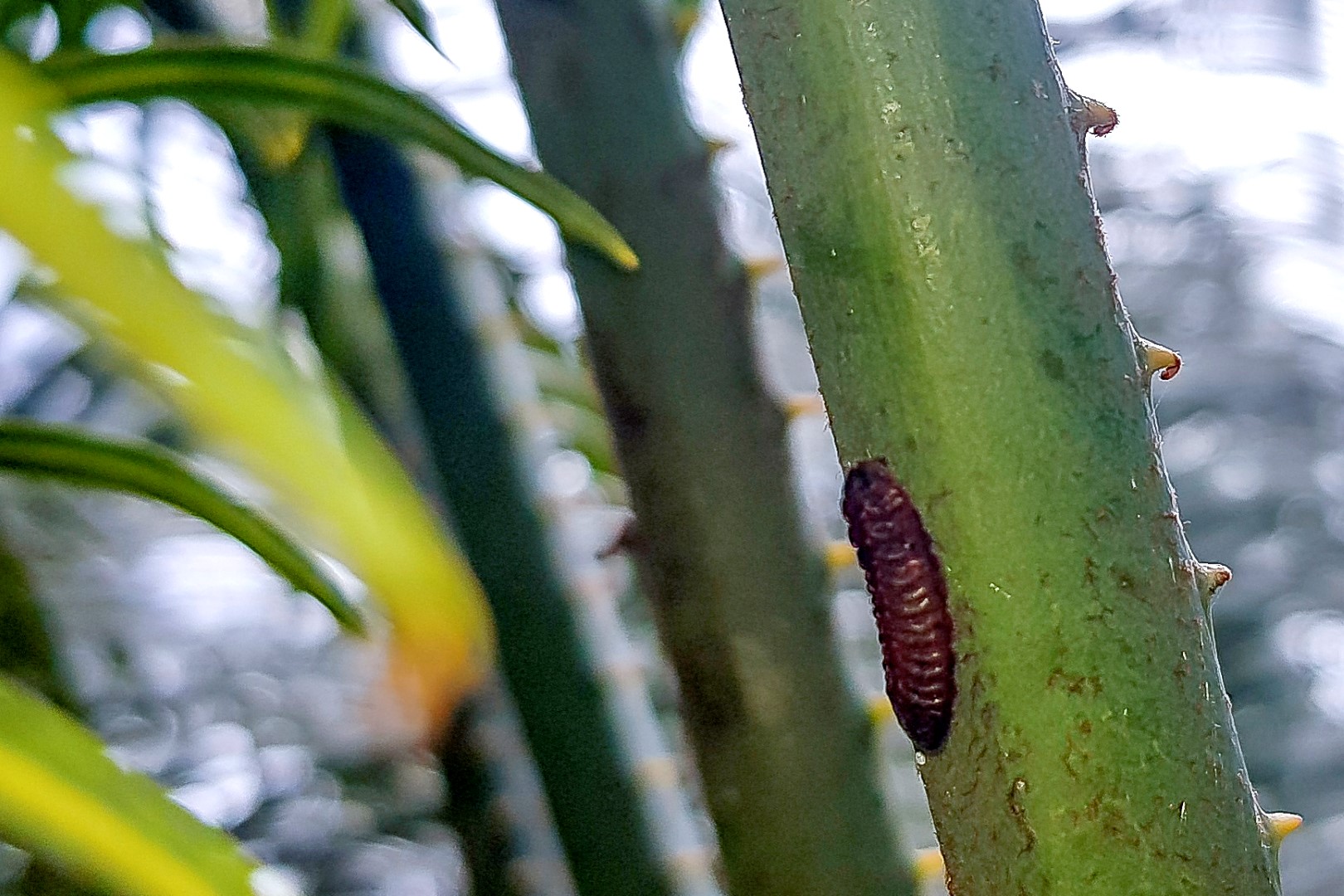 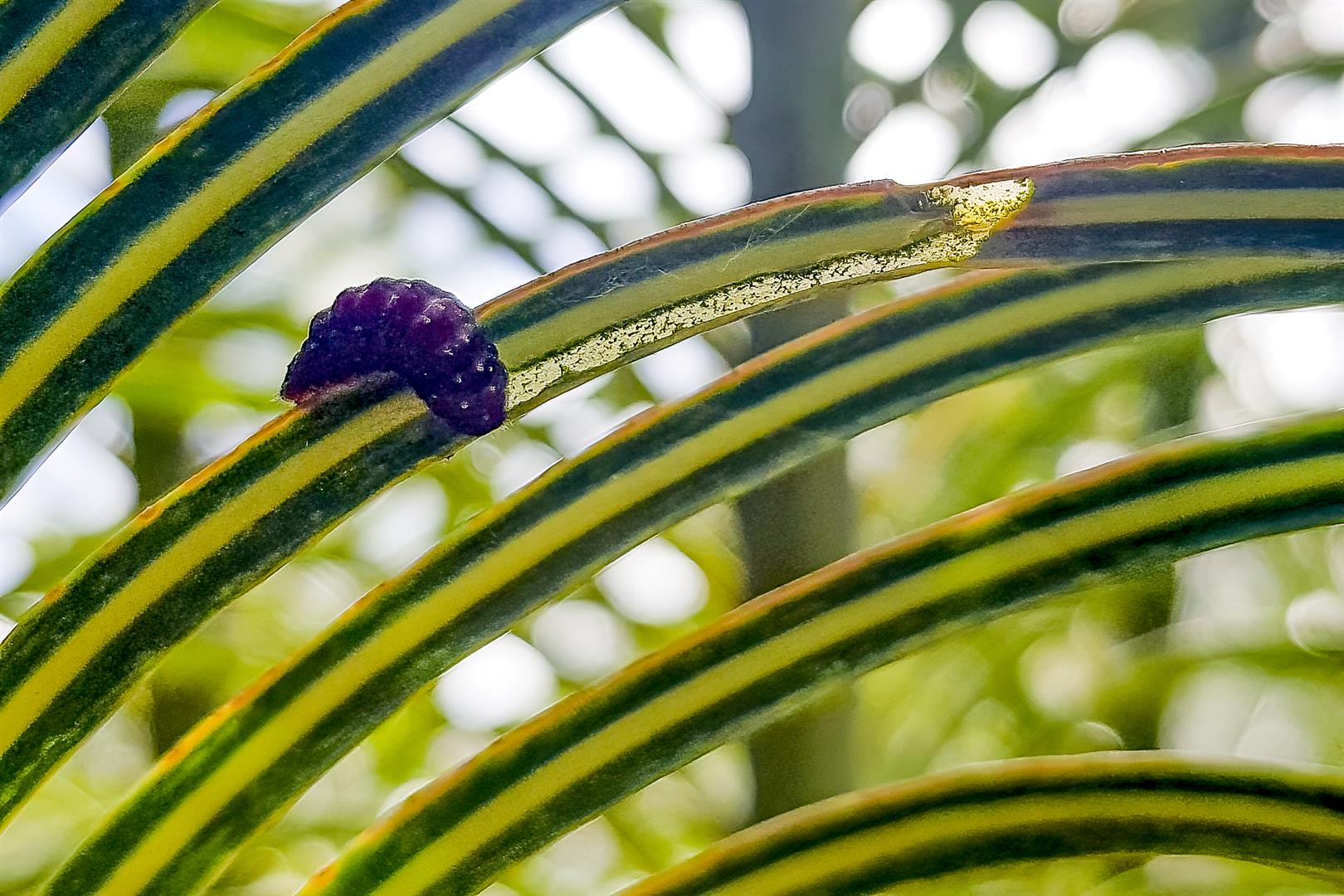 The tiny larvae of the Cycad Blue at work munching on cycad foliage. While the larvae of native butterflies feed on all sorts of plants, only the Cycad Blue can cope with the toxic compounds found in cycad leaves. These compounds are toxic to most animals, and many species that feed on toxic plants use the absorbed chemicals as a defense, as they can be unpalatable to predators. Such species often warn of this with their bright colors (known as apomatism) — ladybugs with their bright orange, red and black markings are a good example.

Suggested responses range from covering garden cycads with netting to all sorts of chemical pesticide warfare. The Yates gardening page on the species focuses on prevention of damage to the plants rather than cure, explaining how to net the plants and keep an eye out for the butterflies.

One factsheet mentions that the best method to manage this butterfly is to grow plants that are not susceptible to damage, as some cycad species are more vulnerable to the blues than others. It is recommended that horticulturalists note information on plant tags about the cycad species being sold so that home gardeners can buy these plants confident that they will not receive damage.

The Australian Butterfly Conservation Facebook page puts things in perspective for those of us who love native butterflies.

The dependence (of this butterfly on cycads) is becoming a problem — as there are a lot less cycads than there used to be! Australia’s native cycads are in decline, many are already threatened or endangered. The lack of available cycads in the bush is also forcing these butterflies into gardens – where they are considered pests. As suitable cycads are not as numerous, nor widespread, as they used to be, the Cycad Blues are often unable to move-on their colonies to new plants – which means they may outstay the cycad’s ability to recover. If you (or your friends) live where the Cycad Blue butterfly lives you can help these special native butterflies by planting cycads in your garden, verge — or even in a pot! Cycads require little maintenance or water — just some shade from the worst of the midday sun.

Grow cycads to feed the butterflies. I like that approach. I love seeing these shimmering, fluttering jewels in the sunlight each spring, floating around a cycad, oblivious to annoyed gardeners. To have a perfect cycad while working to eliminate one of the fascinating relationships that exist between native insects and plants seems kind of pointless to me. But then, our garden has not won any prizes. Yet. 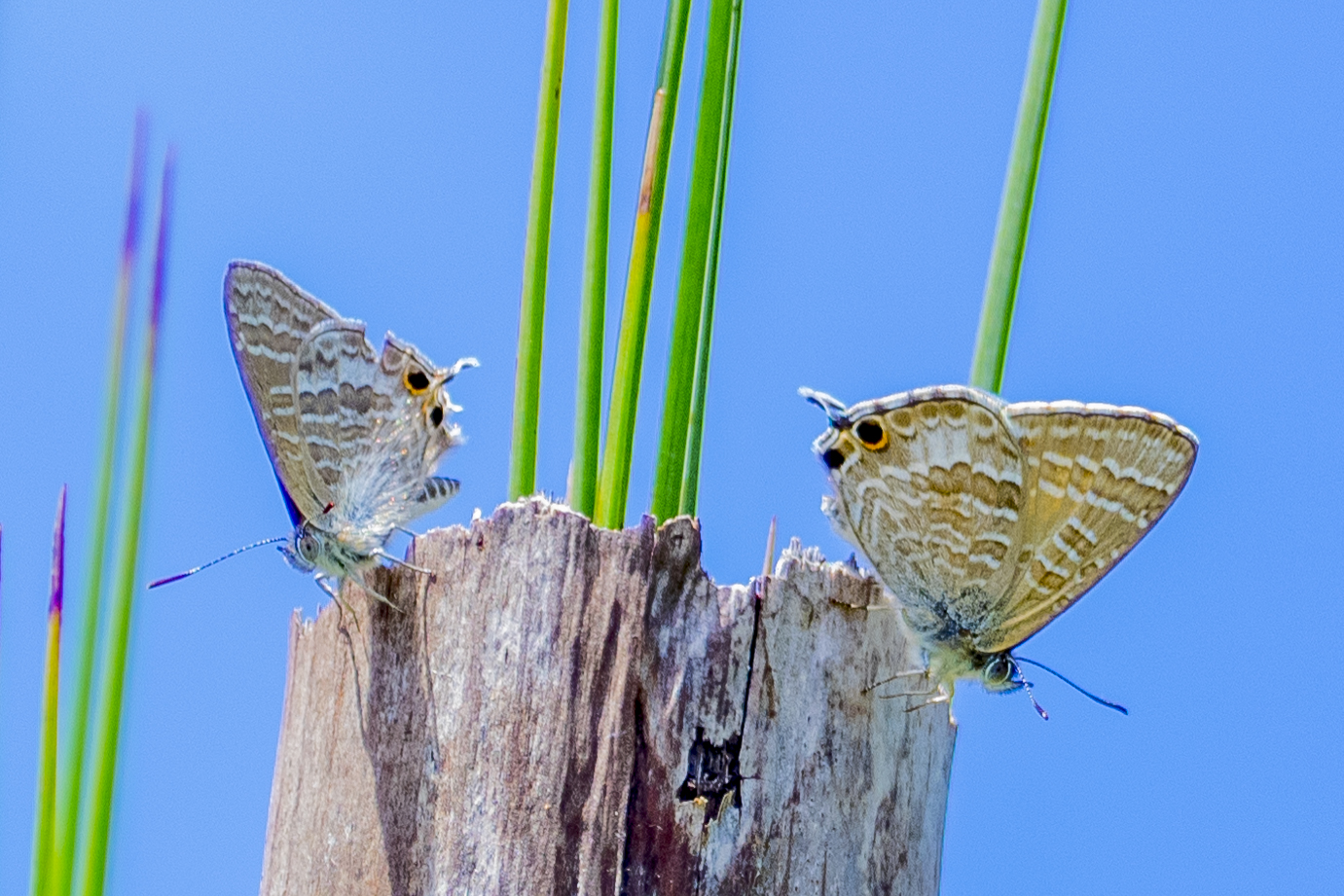 A gallery of blues (click on any image for information).