I grew up in the suburbs of Brisbane in the 60s and 70s. It was a large sprawling town really, on the edge of becoming a city. There were chaotic urban blocks, old wooden houses with overgrown yards, huge mango trees, untidy footpaths, space, and lots of interesting wildlife. 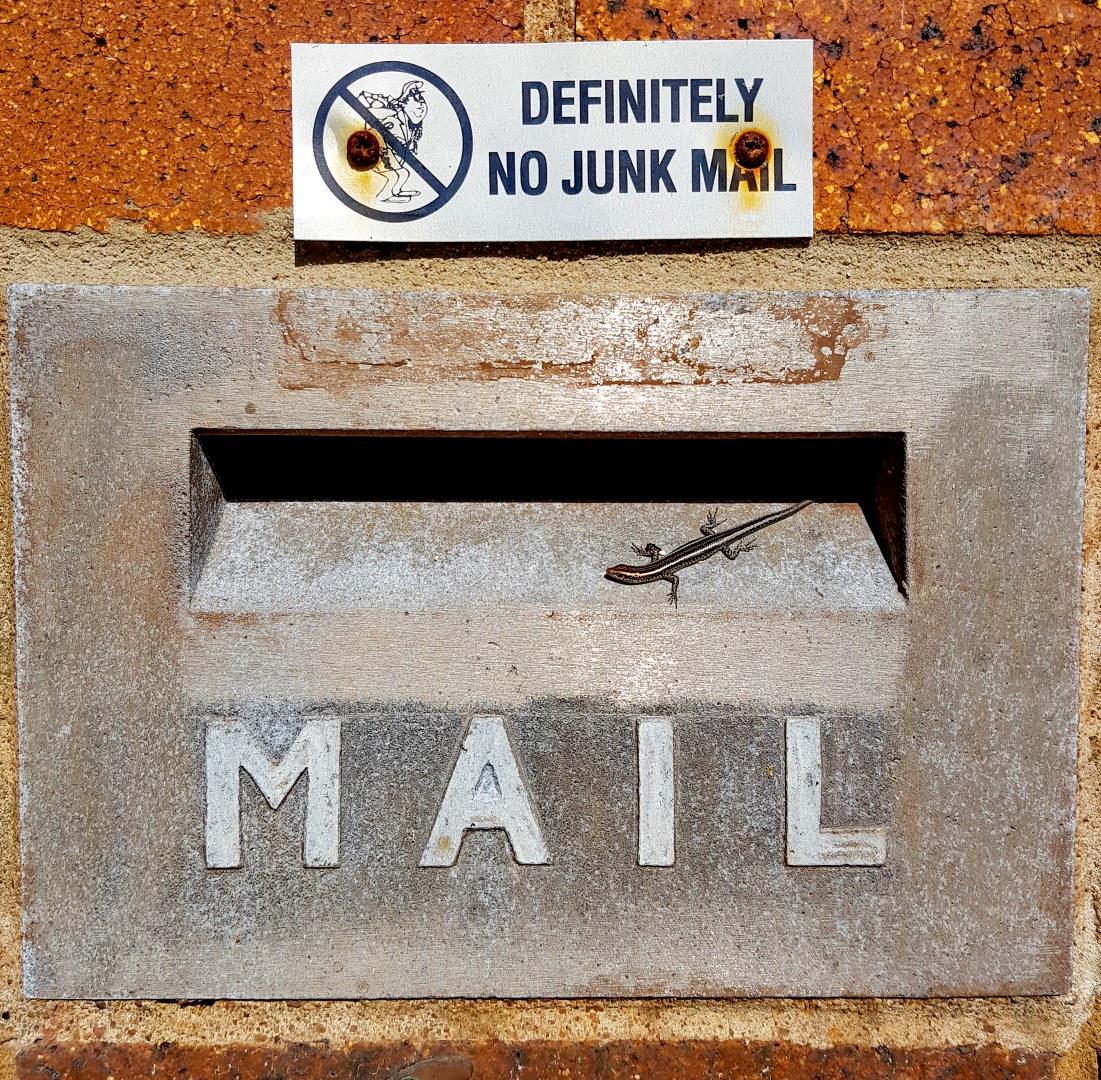 At dusk a huge stream of flying foxes would darken the sky above our house at Manly in the Brisbane Bayside area, moving into the suburbs from the mangroves near the mouth of the Brisbane River, looking for food in backyards and the nectar of flowering eucalypts. Their colony is long gone, along with much of the mangrove forest they lived in — cleared for a huge port extension.

I would take a torch at night and stand under Queen Palms and peer up at these squabbling, fascinating mammals, Black and Grey-headed Flying Foxes. Their mysterious leathery wings and dog-like faces had me enthralled. I completed a poster on bats for a primary science competition, scouring libraries for anything I could find about these creatures, which was not a lot. 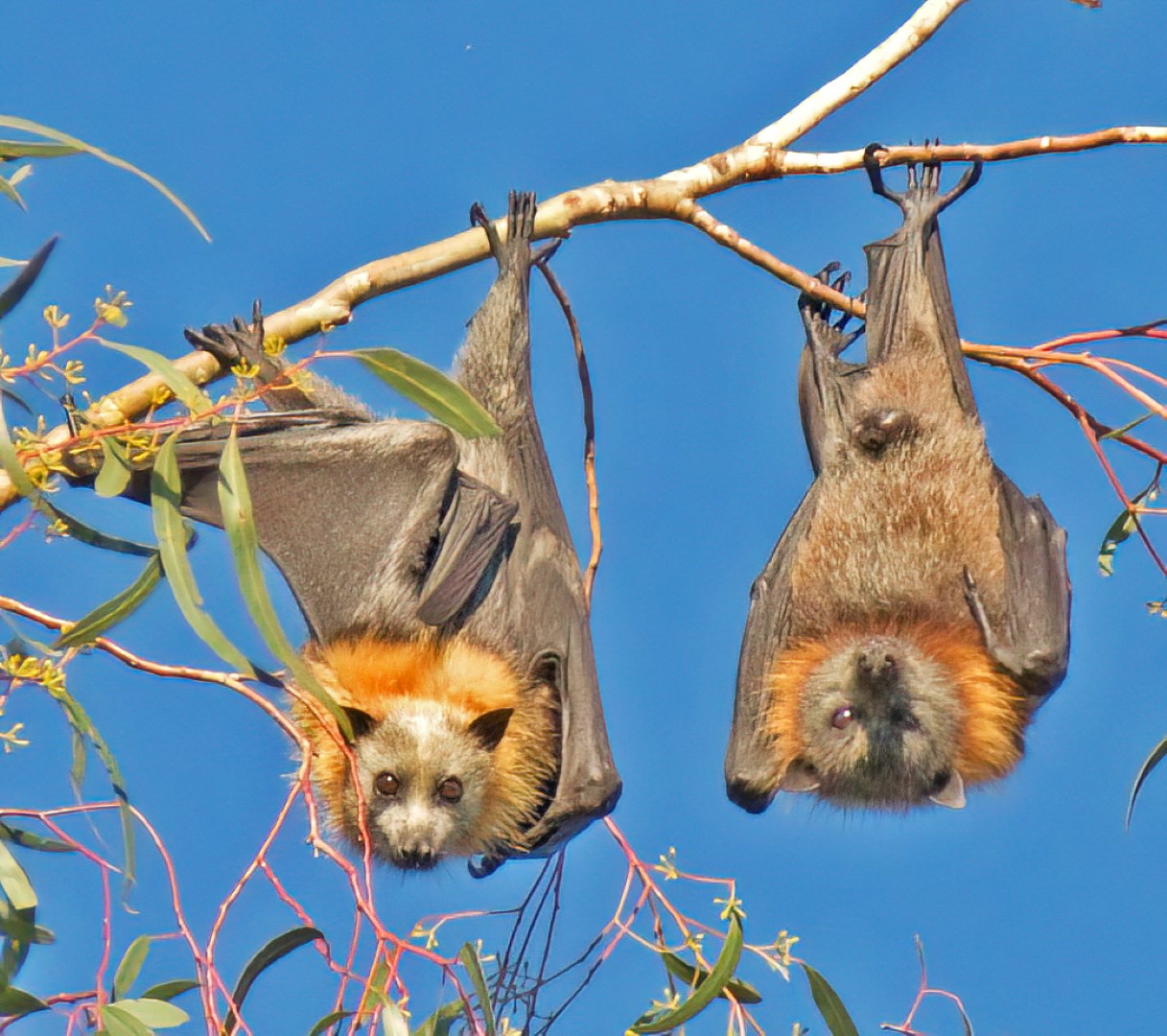 Grey-headed Flying Foxes (Pteropus poliocephalus). A much-loved feature of my urban childhood. Who could not be charmed by bats?

Old houses had dodgy tin roofs, where sparrows and possums could move in and cause havoc. And there were always reptiles. Carpet Snakes and large, fierce, fence-claiming Bearded Dragons. 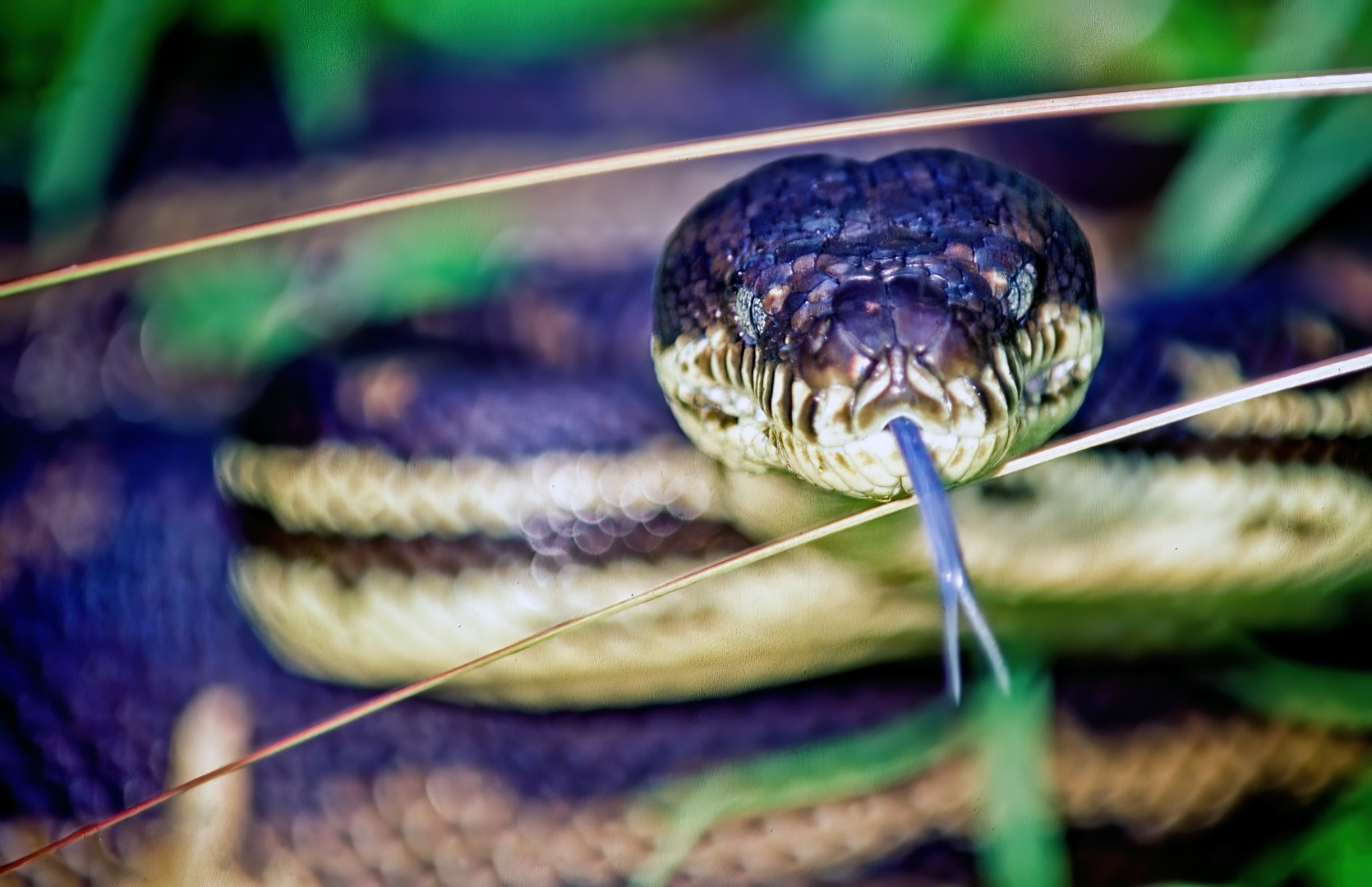 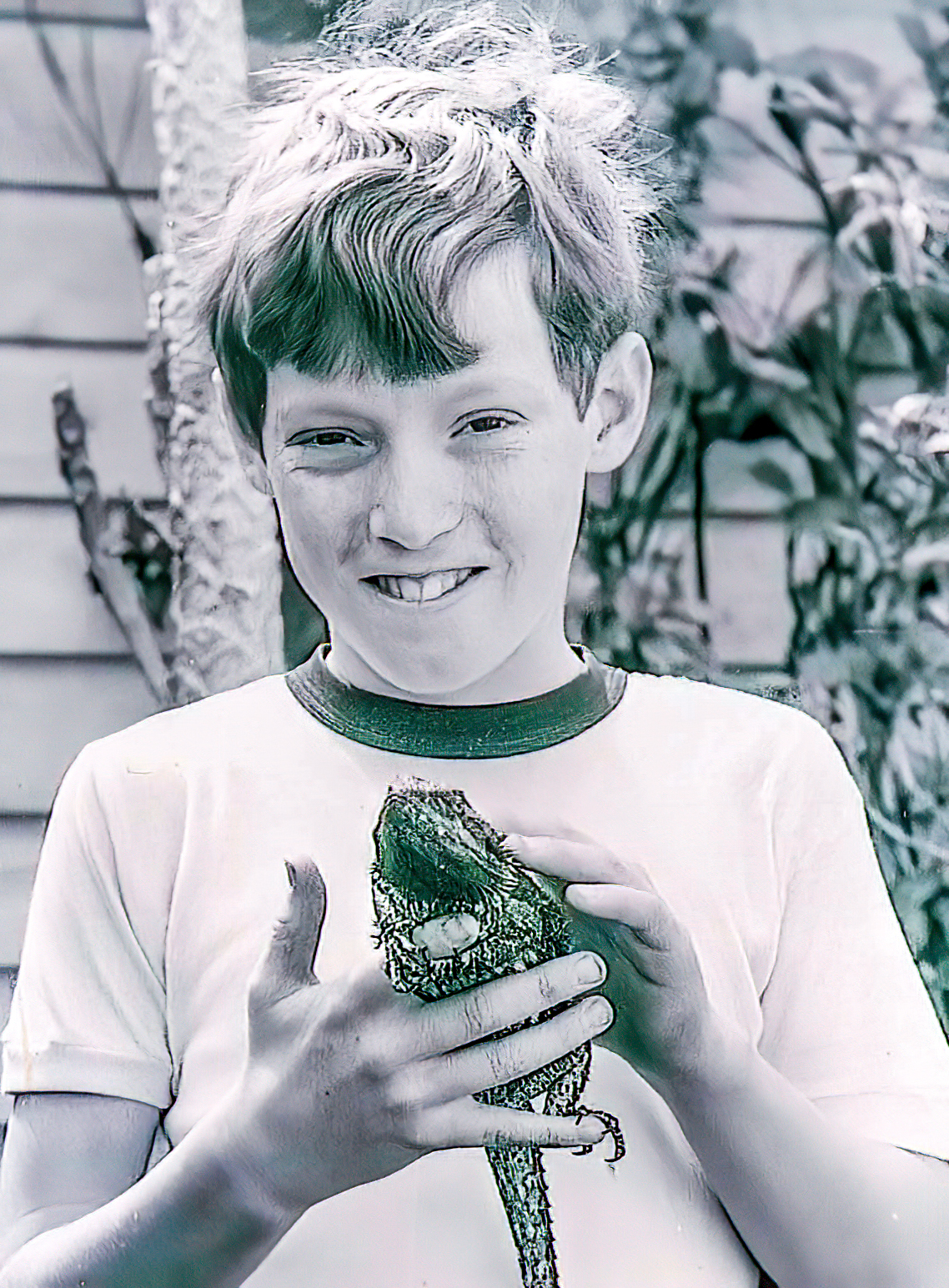 Every backyard in Brisbane in the 60s and 70s had reptiles. And for a young fan of wildlife, Bearded Dragons were endlessly fascinating.

There were always skinks, those miniature marvels. Large, slow-moving Blue-tongued Skinks (Tiliqua fasciata) and the small brown, ground-dwelling Garden Skinks (Lampropholis delicata), which scurried about sunny patches on the edge of garden beds. 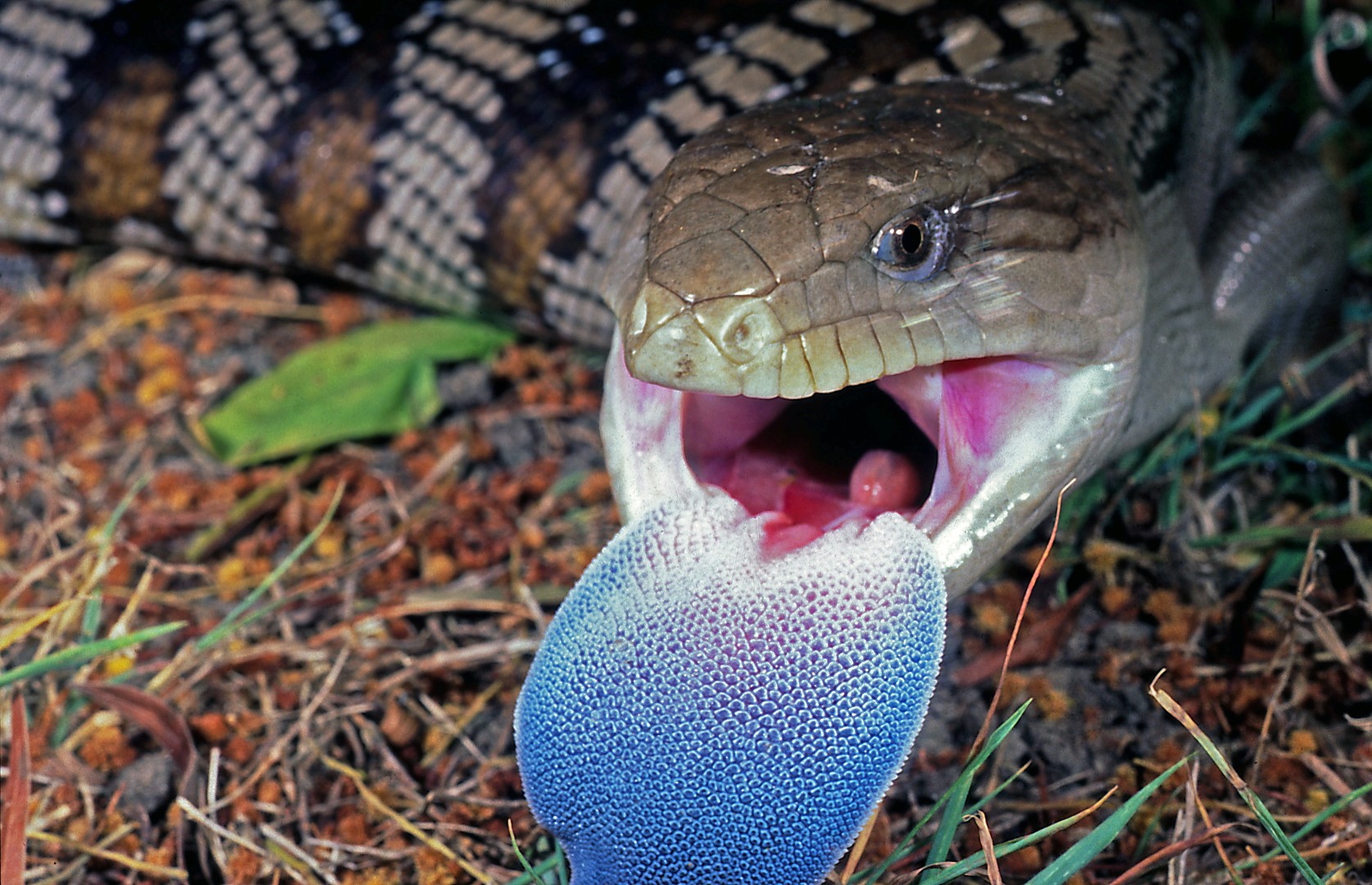 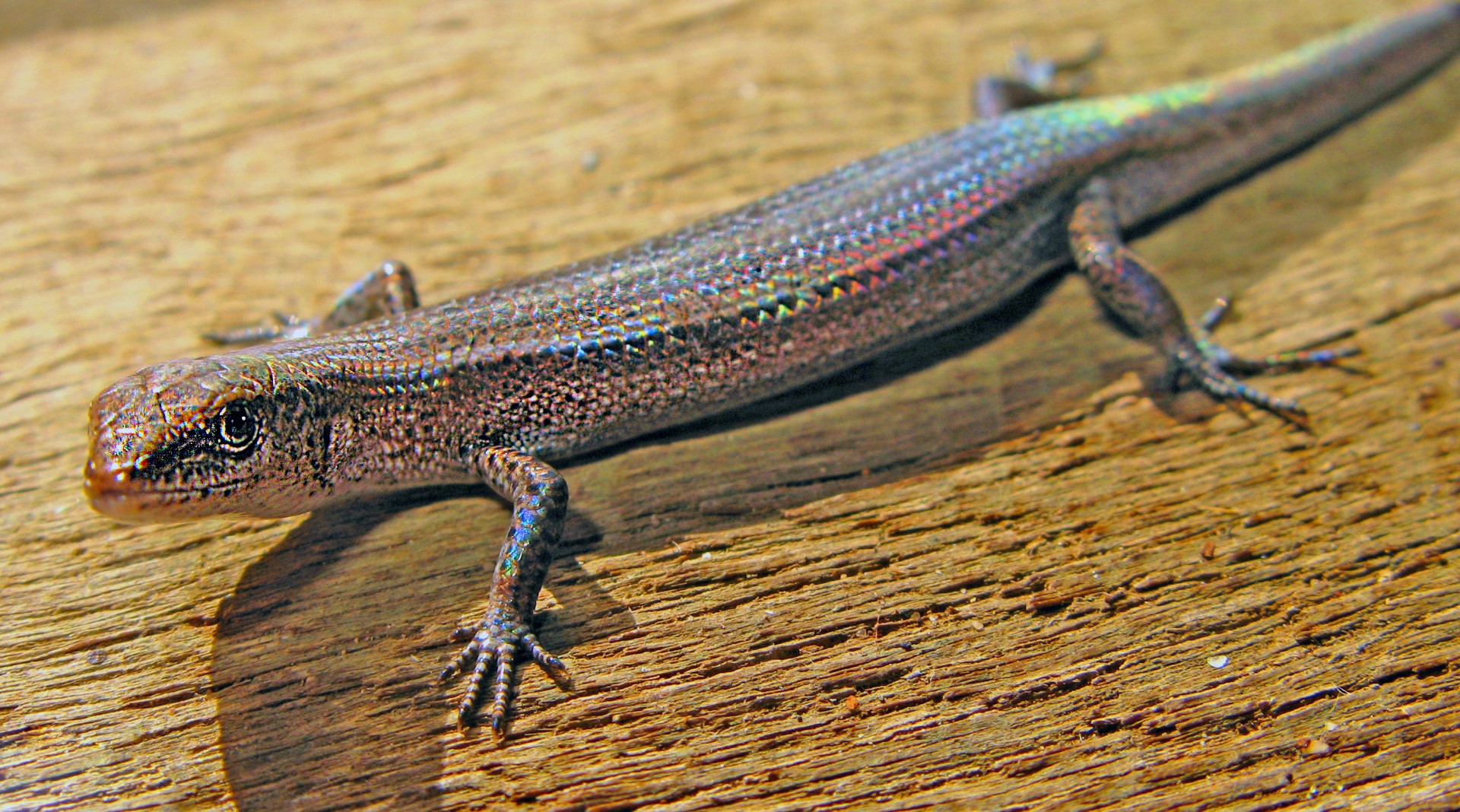 Then there were the darker, striped, wide-eyed and wary Fence Skinks (Cryptoblepharus pulcher), which raced along fences, defying all efforts to be caught. 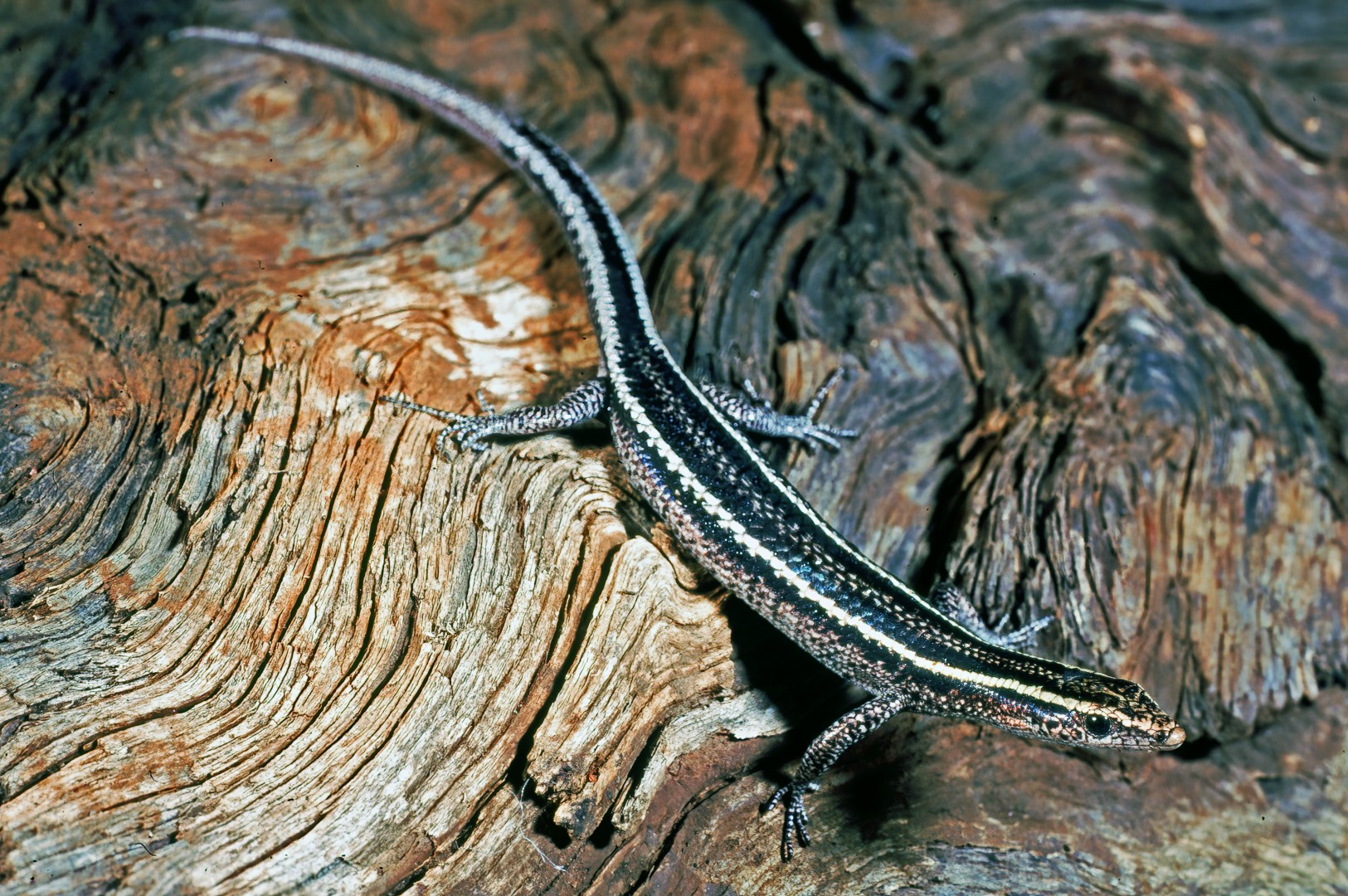 I still look forward to seeing Fence Skinks (now usually referred to as Snake-eyed Skinks) while walking the dog in Toowoomba on sunny mornings. They warily watch the dog and I as we stroll past their early-morning fence gatherings, and I marvel at how they carry on their lives amidst our urban chaos. They seem to be a living link to my suburban childhood, clinging on as they do in the edge zones of our dwellings and structures and in the distant memories of sunny childhood yards long gone. 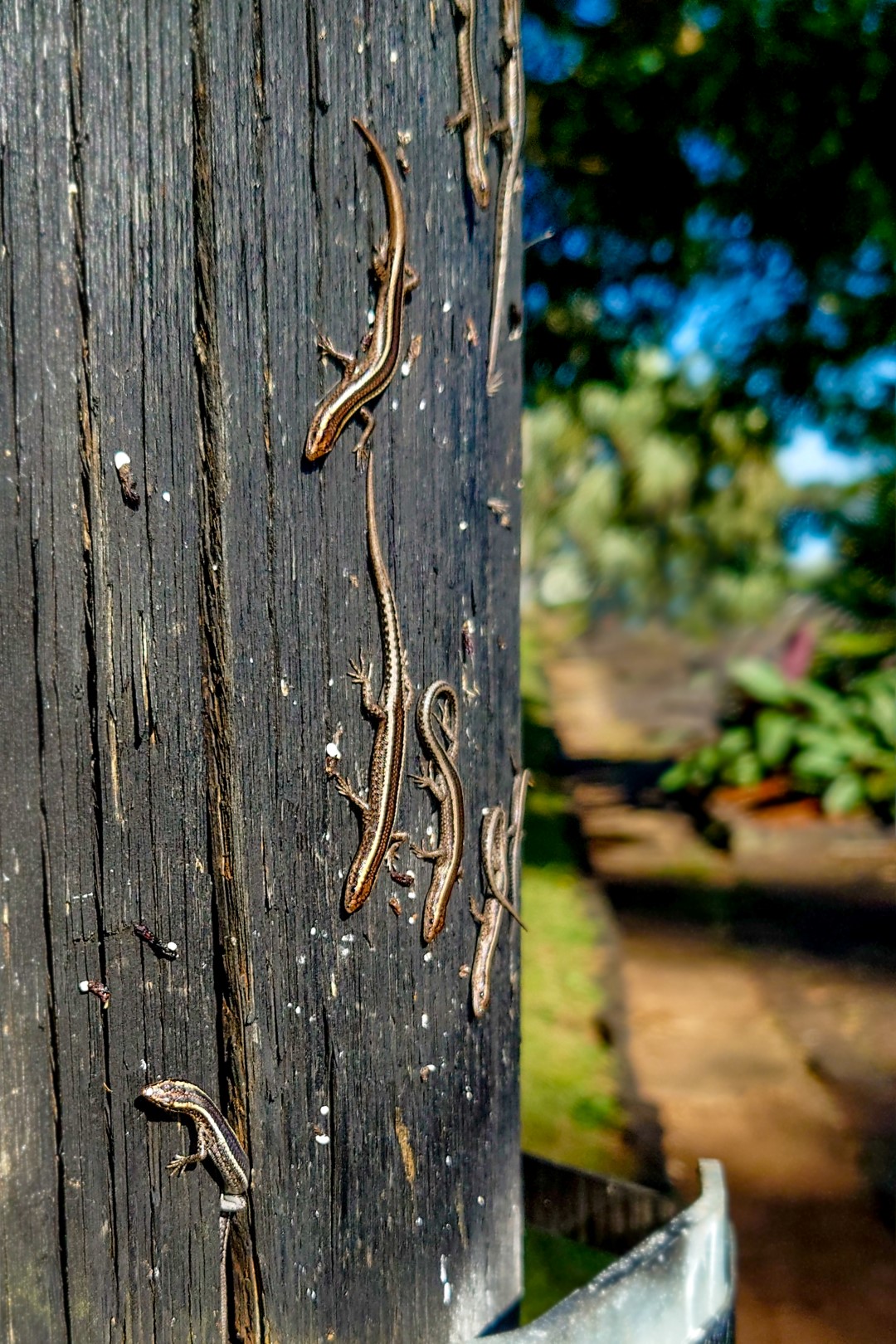 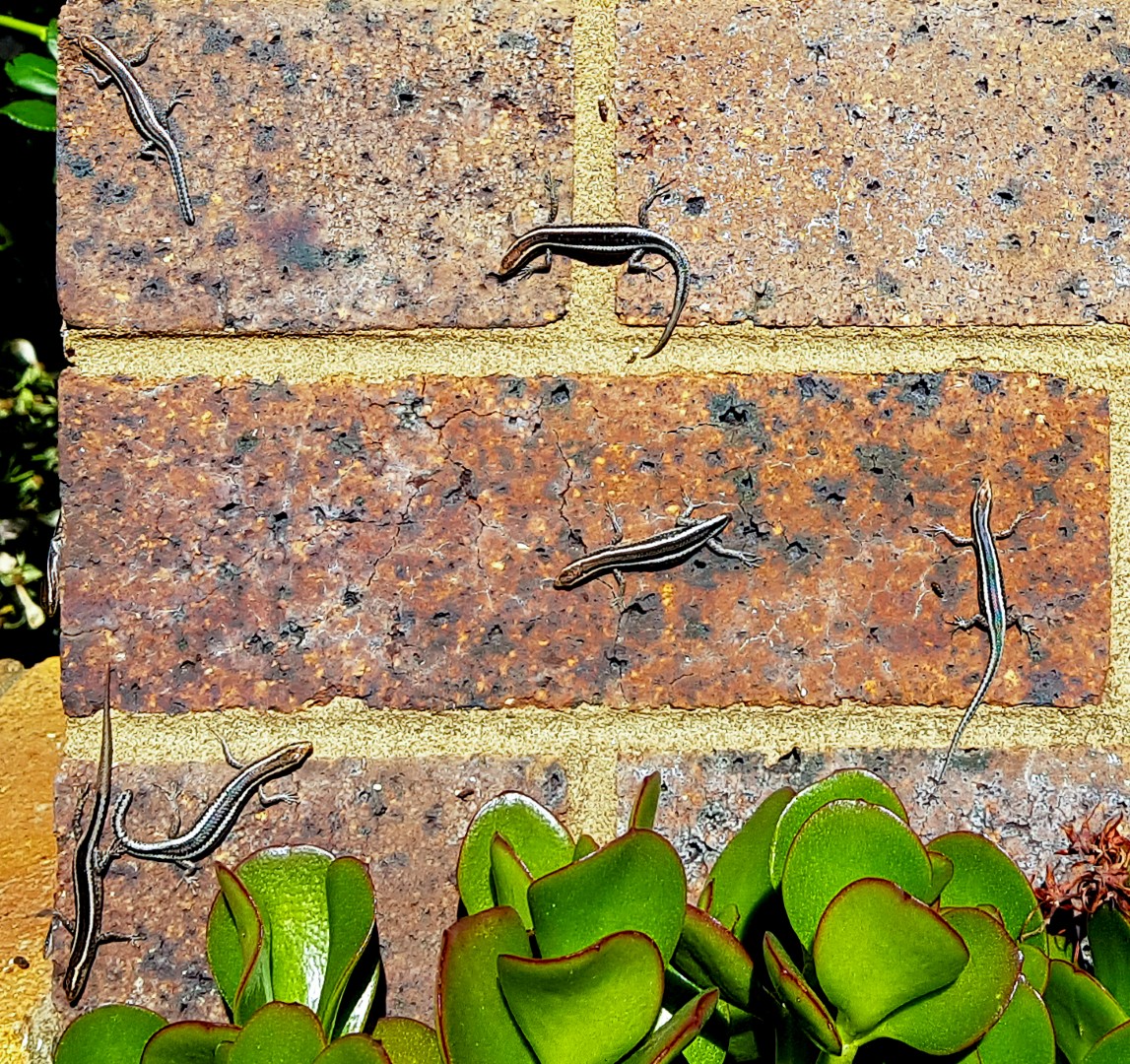 One can only wonder what social dynamics are happening here. Many of this group have either missing tails or have regrown new ones — evidence of a perilous life near the bottom of the food chain. These dark bricks on an eastern-facing fence on a busy road warm quickly in the morning sun and are a much-loved hang-out for my local skinks. 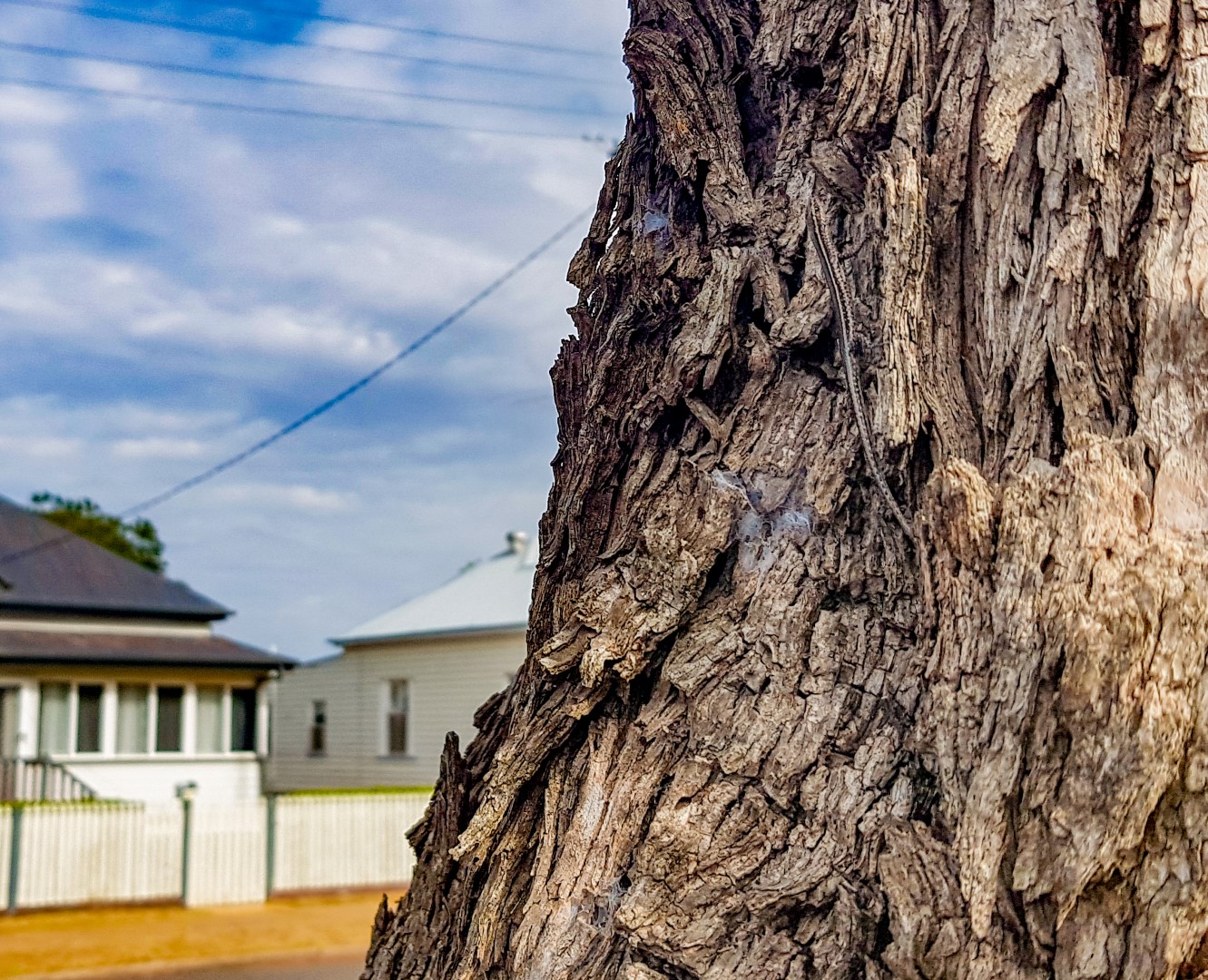 As Steve Wilson says in Australian Lizards, a Natural History, “Lizards are extraordinarily successful at what they do best — being lizards.”

Skinks, the largest group of lizards in terms of number of species, have a wide range of adaptations and survival strategies that have seen them flourish in virtually all Australian habitats, including cities and towns. Snake-eyed Skinks must surely be at the top of the list for being able to survive around people. 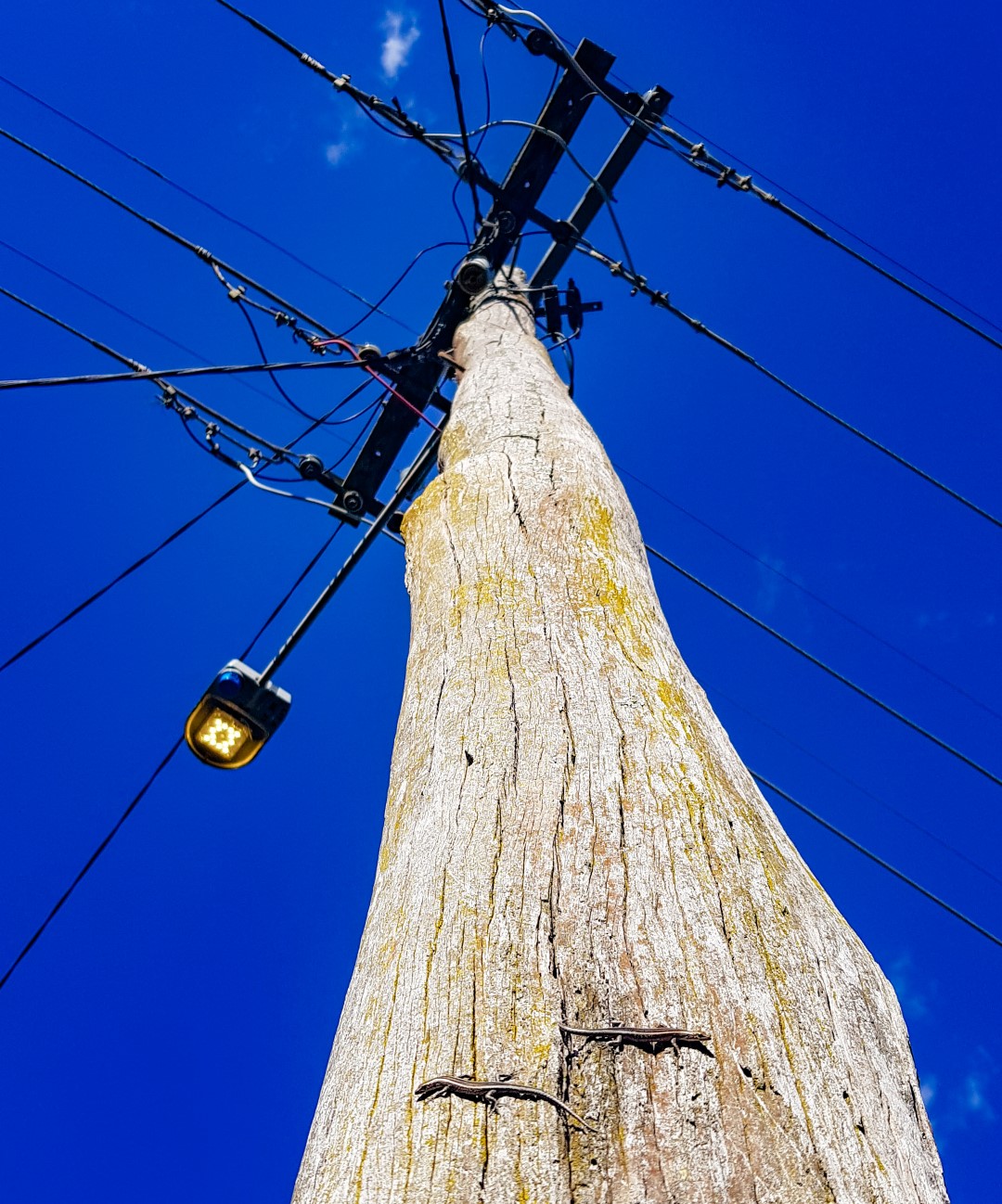 There are currently 23 species of snake-eyed skinks (Cryptoblepharus) described in Australia. They are long-limbed, flat-bodied lizards — swiftly defying gravity as they race over rocks, fences, tree trunks and buildings. They are found across most of Australia, other than the south-eastern mainland and Tasmania. Their long-limbed, flattened characteristics are taken to the most extreme proportions in the Fuhn’s Snake-eyed Skinks (Cryptoblepharus fuhni), found only on the surfaces of granite boulders at Cape Melville in north-eastern Queensland. 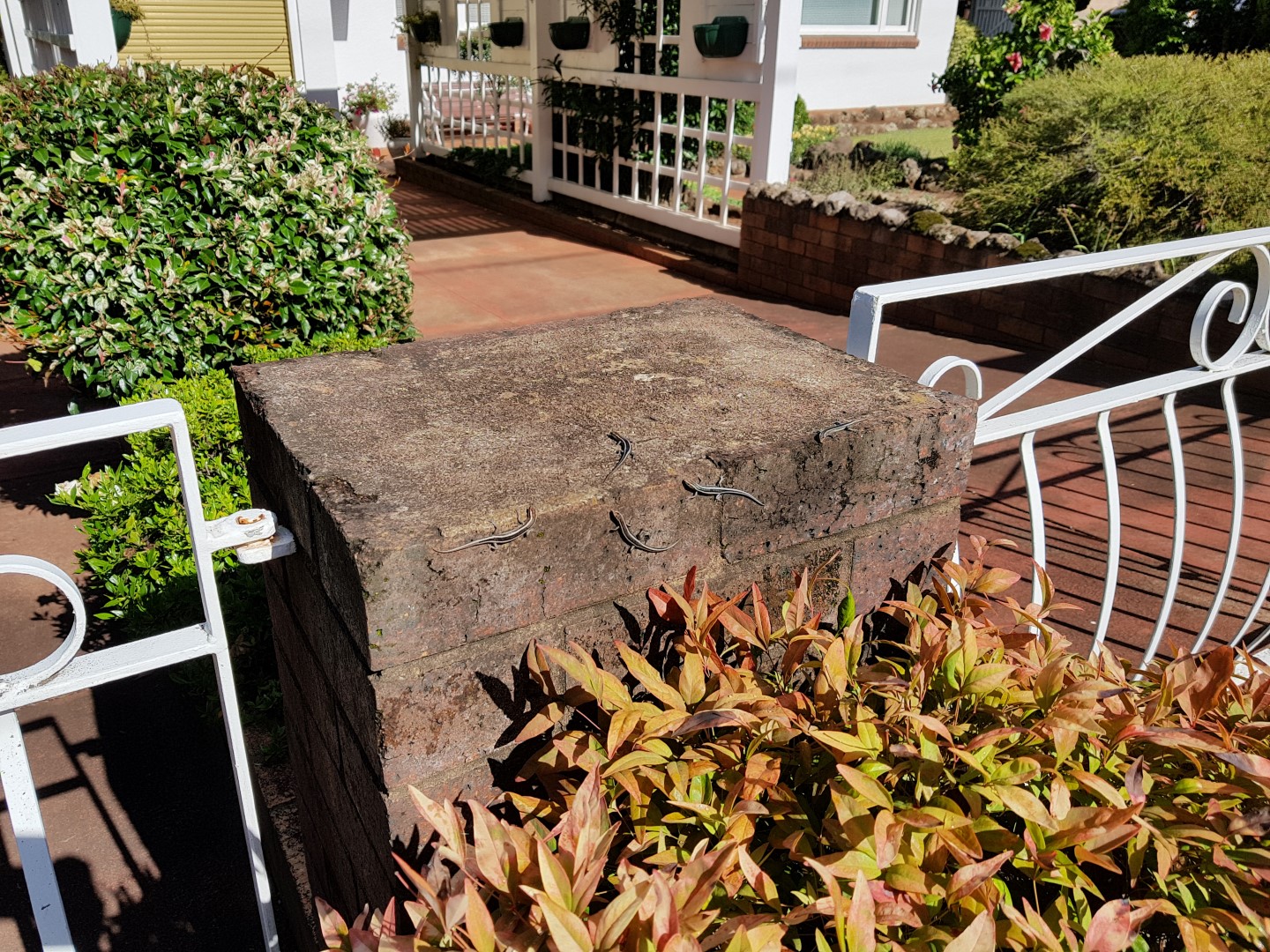 My local fence-loving species, the Elegant (or Pretty) Snake-eyed Skink (Cryptoblepharus pulcher pulcher), is the ‘nominate’ subspecies, found across eastern Australia from Ingham in Queensland to Jervis Bay in New South Wales (including in inner suburban Sydney and Brisbane), while the subspecies Cryptoblepharus pulcher clarus is found in locations in southern Australia between South Australia and Western Australia. In my local bush areas I have seen Elegant Snake-eyed Skinks on trees and rocks, while in the suburbs they hang out on the human-engineered vertical surfaces of fences and walls. 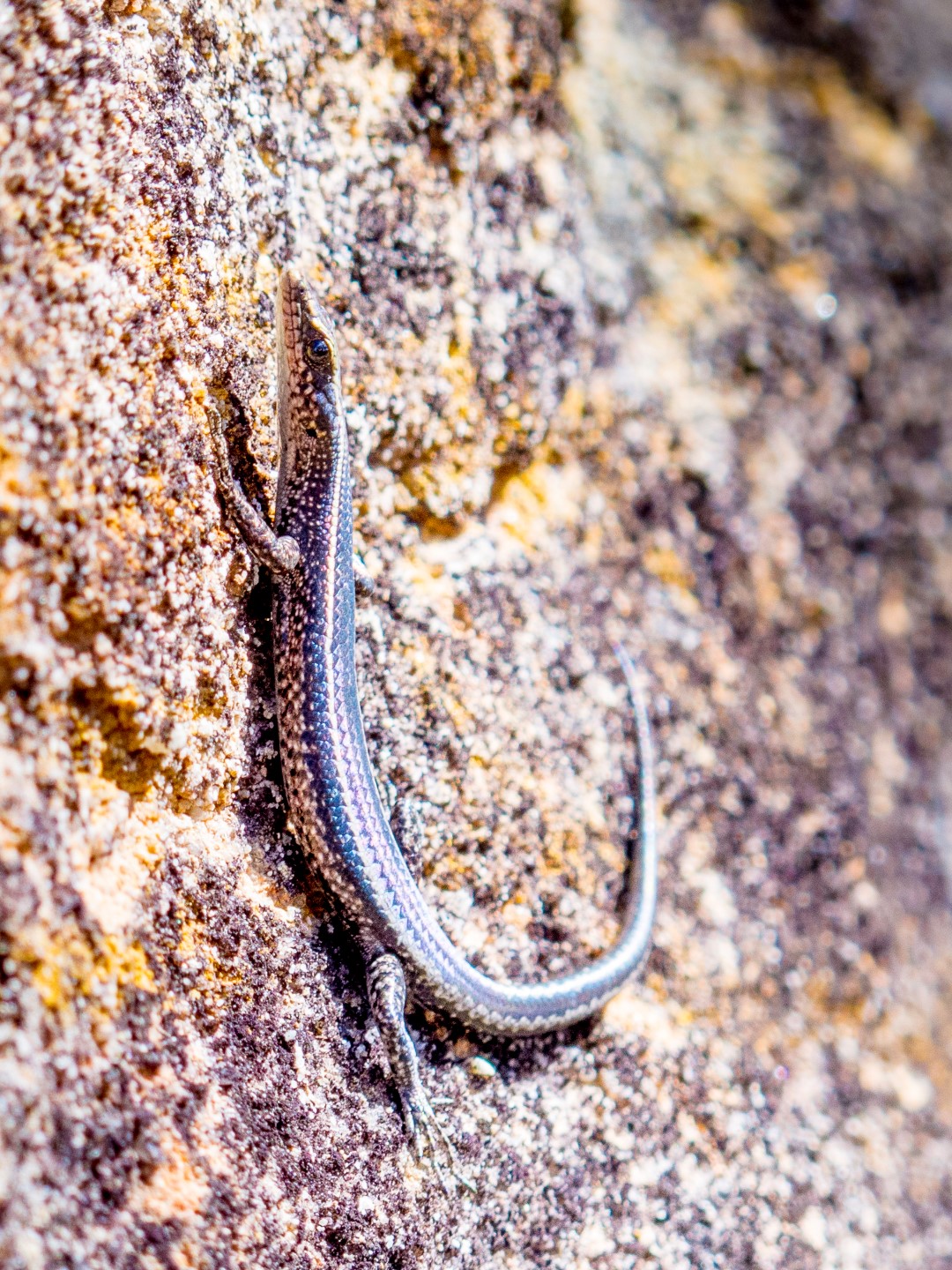 An Elegant Snake-eyed Skink in the wild, seen here on sandstone in bushland at White Rocks reserve near Ipswich.

Other species of snake-eyed skinks include the Coastal Snake-eyed Skink (Cryptoblepharus litoralis), which stays close to the rocky coasts of north-eastern Queensland and the Northern Territory, where it avoids waves to feed on wave-drenched rocks. The Agile Snake-eyed Skink (Cryptoblepharis zoticus) is a rock specialist, living on the sandstone escarpments of north-western Queensland and the Northern Territory. 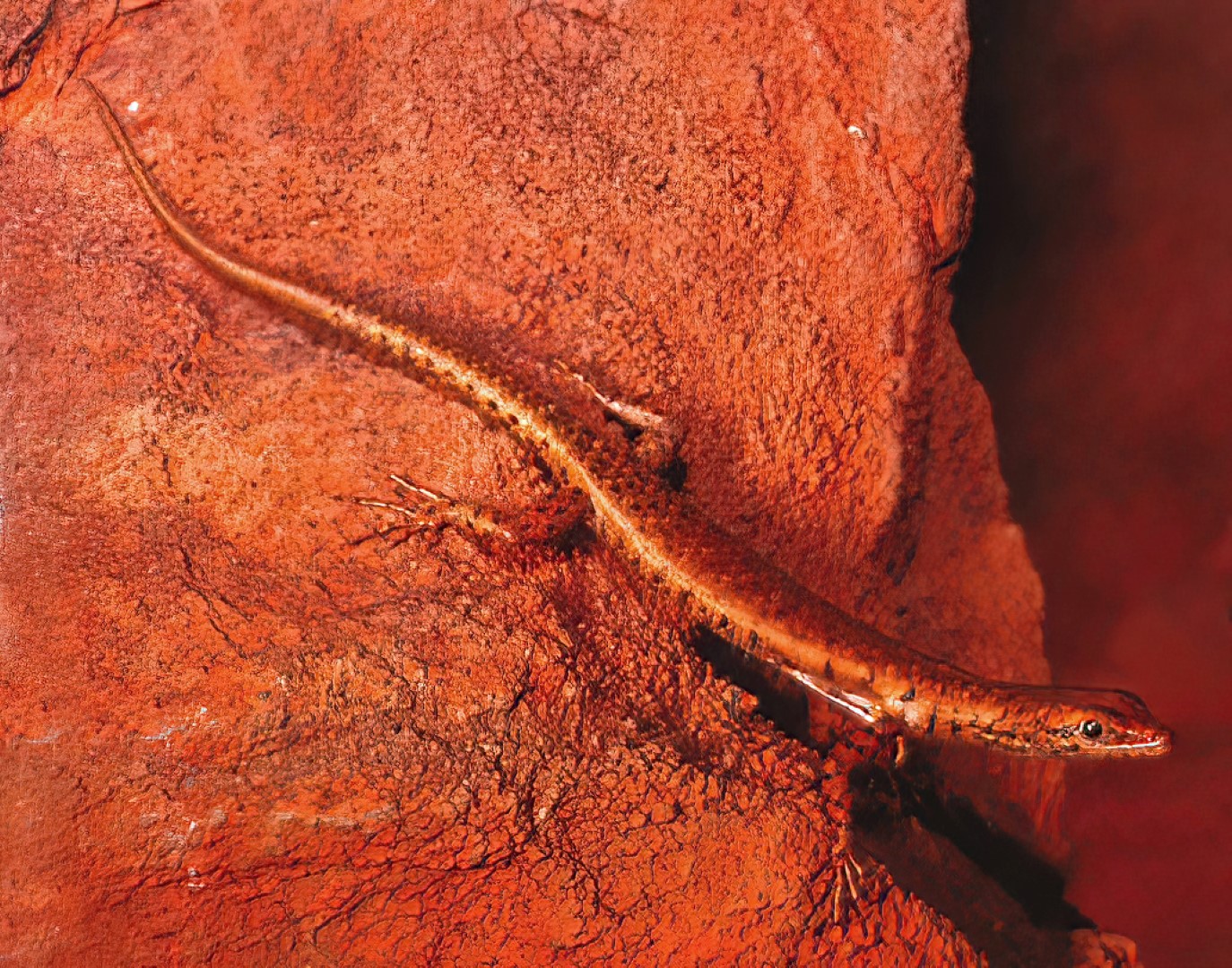 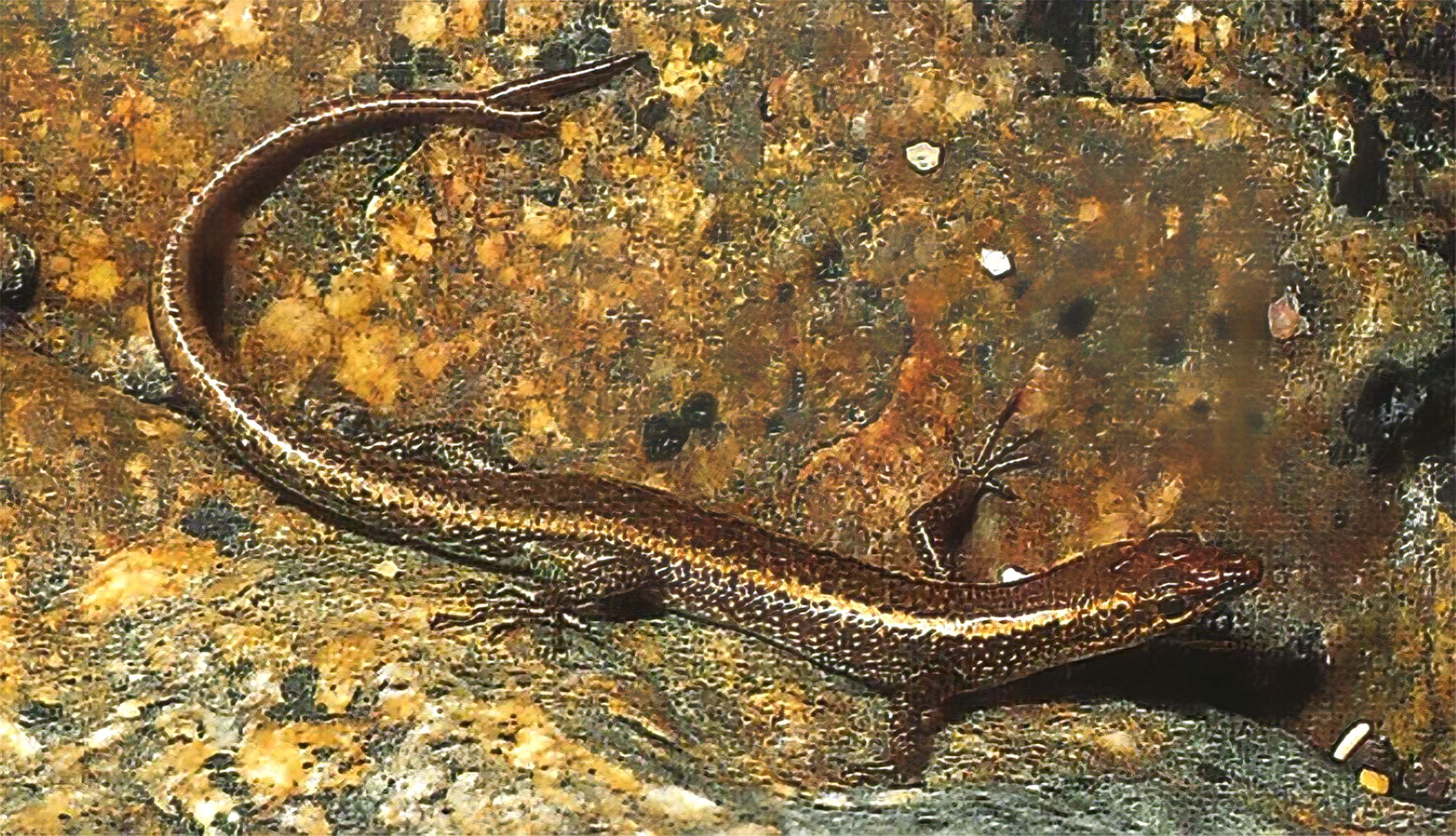 Snake-eyed skinks have adapted well to life in the suburbs and to harsh bush environments. While they extend from the deserts well into areas with high rainfall, they dwell on exposed vertical surfaces, places usually free of moisture. One feature that assists them in surviving in such habitats is the presence of a transparent, fixed eye cover known as a brille (hence the name  ‘snake-eyed’). This is the skink’s lower eyelid, which is permanently closed in an upright state, a condition known as ablepharine. This reduces the amount of moisture lost through the lizard’s eyes, a real problem for small reptiles in warm and dry places. 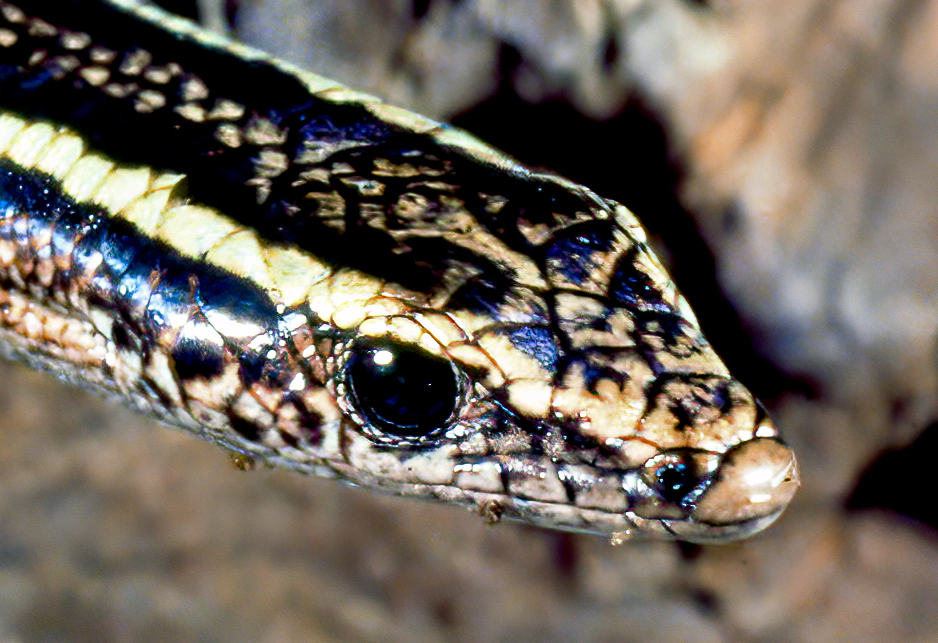 The transparent, fixed eye cover (known as a ‘brille’), that earns this skink the common name ‘snake-eyed’.

Covering the eye with an immovable transparent window has evolved independently among small skinks worldwide. More than eight Australian species exhibit the condition. At one time, all skinks that adopted this water-saving strategy were lumped together in one genus, Ablepharus. The name appears in old Australian reference books and was applied to unrelated species ranging from central Victoria to central Europe.                                  — Steve Wilson and Gerry Swan. What Lizard is That? 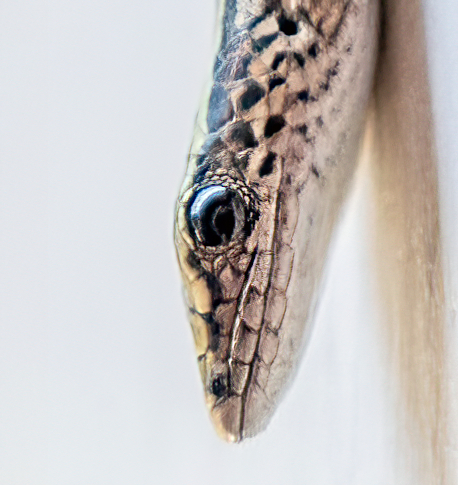 As they are able to withstand desiccating conditions, snake-eyed skinks have been able to travel across oceans. The genus extends from southern Africa and out across the Pacific and Indian Oceans, where they are found living on isolated small islands. Their moisture-resistant eye-caps have assisted them in surviving such long-distance travels.

The Christmas Island Blue-tailed Skink (Cryptoblepharus egeriae) is a species of snake-eyed skink that originally travelled to Christmas Island from Australia, or islands ecologically connected to it. Once common and widespread in the 1980s, this species was driven to extinction by 2010 by an introduced predator, the Yellow Crazy Ant (Anoplolepis gracilipes). However, rangers on the island saved 66 skinks and a captive breeding program in Australia began. 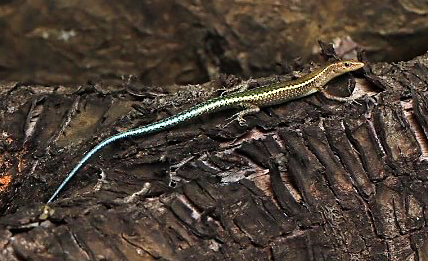 Jon-Paul Emery researched the Christmas Island Blue-tailed Skink on Christmas Island as part of his PhD thesis. He says, “Captive breeding of the aptly-named blue-tailed skink was incredibly successful; so much so that Parks Australia in 2017 began trials re-introducing the skink back onto the island to try and establish populations in predator exclusion sites. My research investigated the ecology of the species as well as ways to monitor the skinks and how they responded post-release. I also looked at the threats that affected how well the skinks did within the translocation sites.” 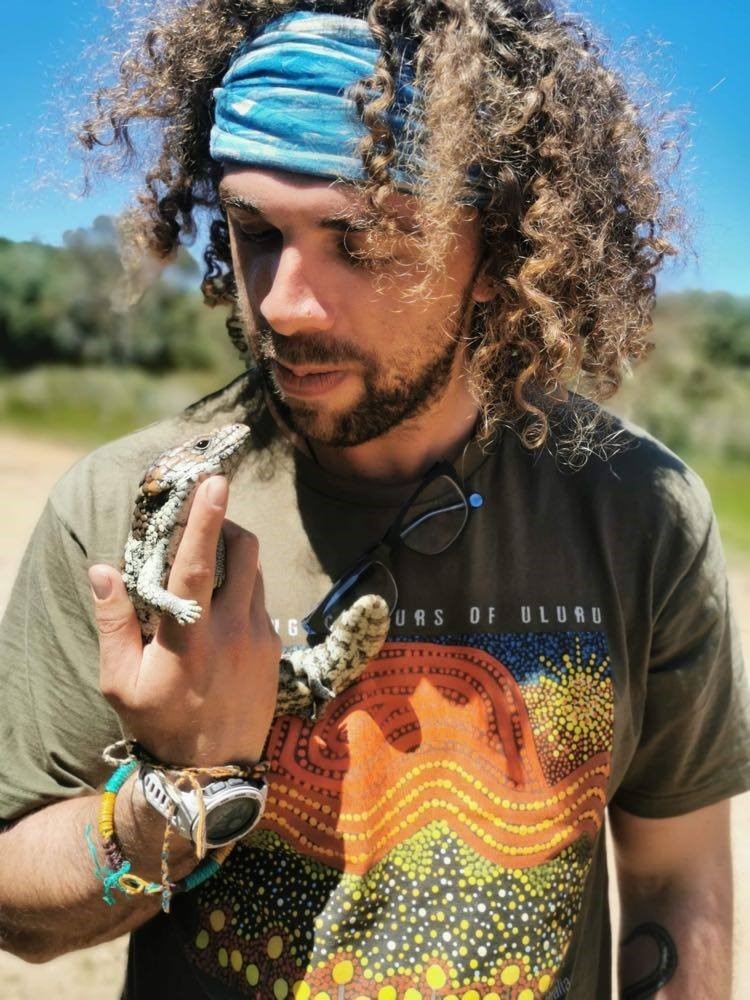 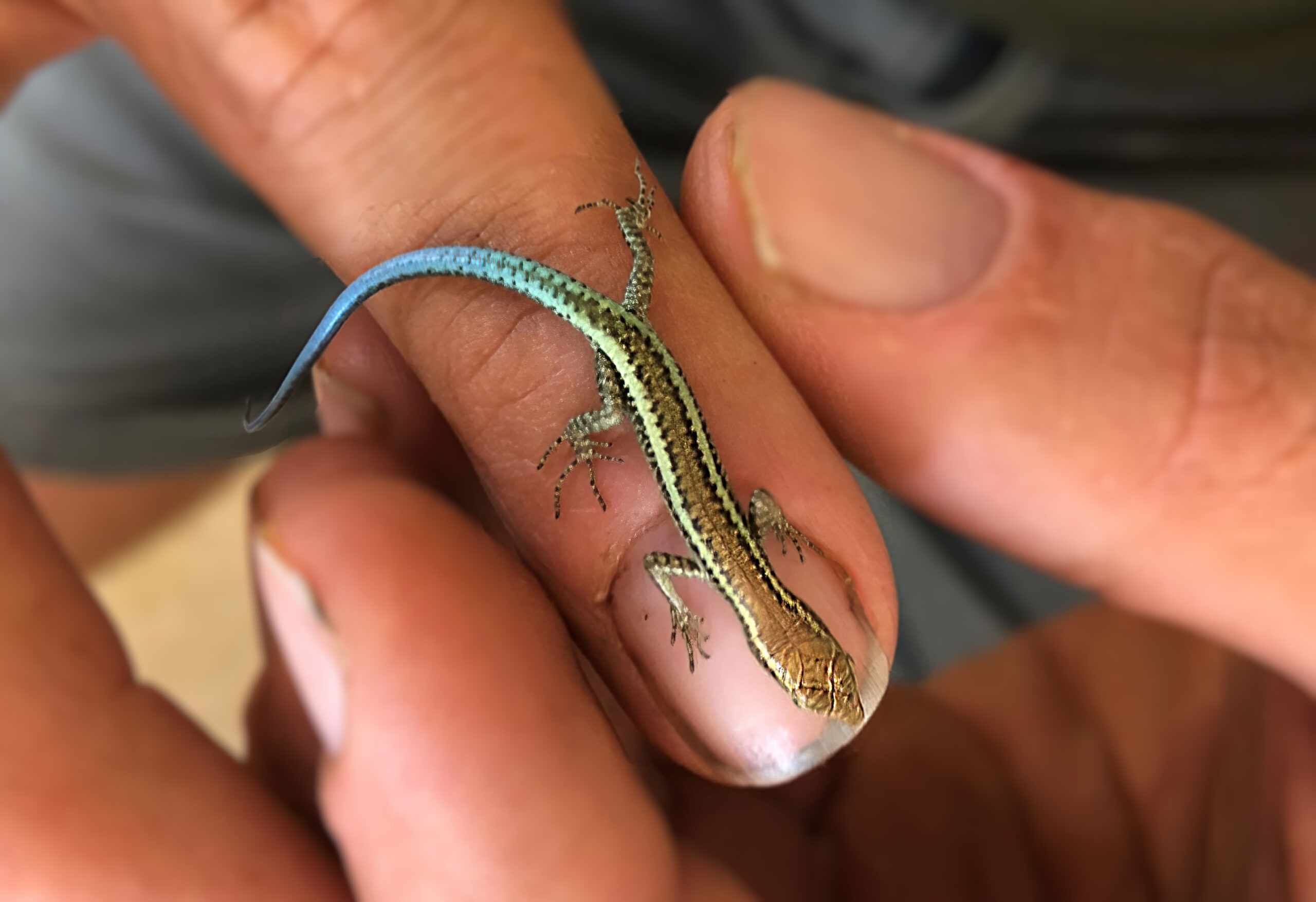 Jon-Paul’s research has helped inform ongoing management of the species, with translocations been undertaken to the Cocos (Keeling) Islands (an archipelago 1,000km away) and additional sites on Christmas Island. 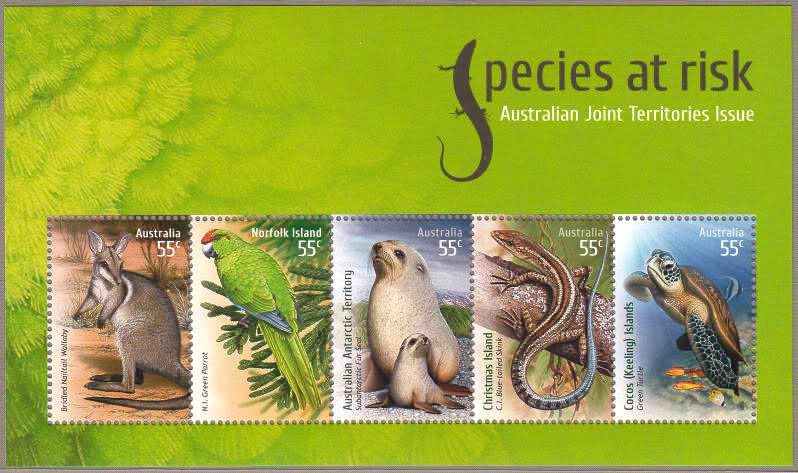 In the safer suburbs of Queensland, Snake-eyed Skinks race out to catch passing insects such as flies, cockroaches, bugs, wasps and grubs. They tend to capture more flying insects than other ground-dwelling lizards. They have been observed carrying out ‘kleptophagy’ — a form of piracy whereby they rob ants of the food they are carrying. They have also been seen looting mudwasp nests to take the arthropod prey intended for the wasps’ larvae. When eating ants, they take the tasty ant alates while avoiding worker ants. In my area, naturalist Rod Hobson has watched them eating Black House Ants (Ochetellus glaber). In the Great Victoria Desert, Buchanan’s Snake-eyed Skinks (Cryptoblepharus buchananii) mainly eat termites, small spiders, bugs and beetles. 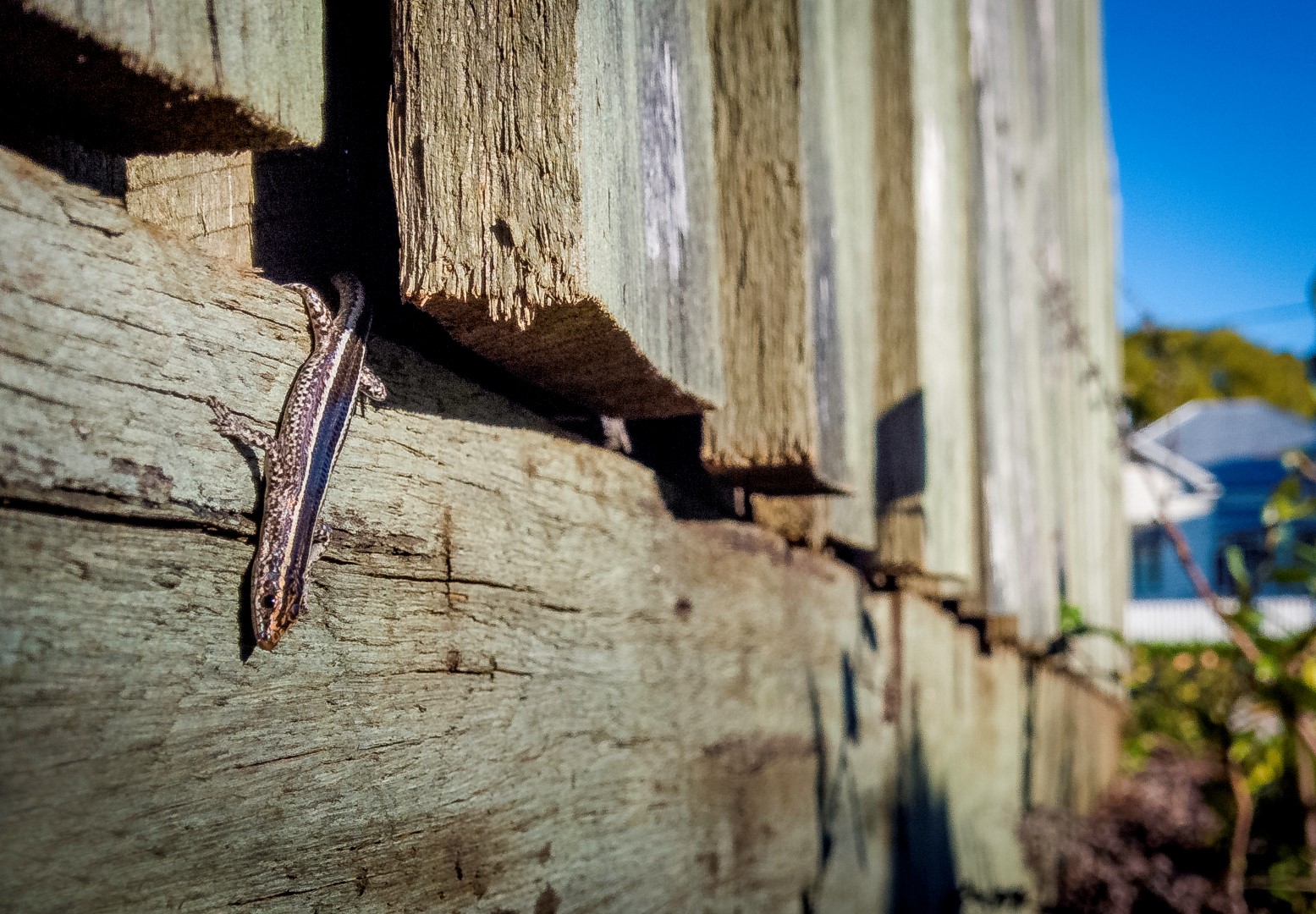 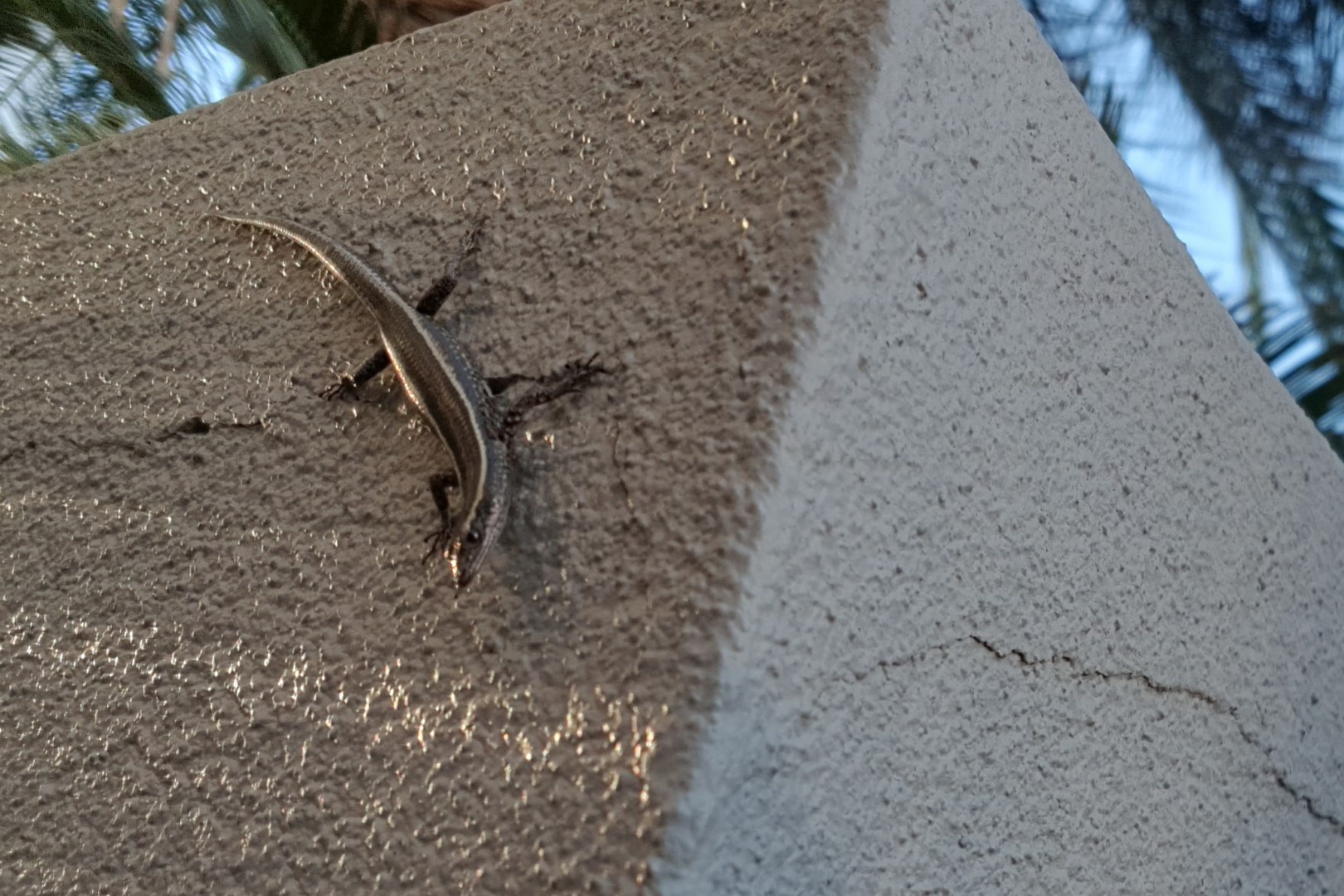 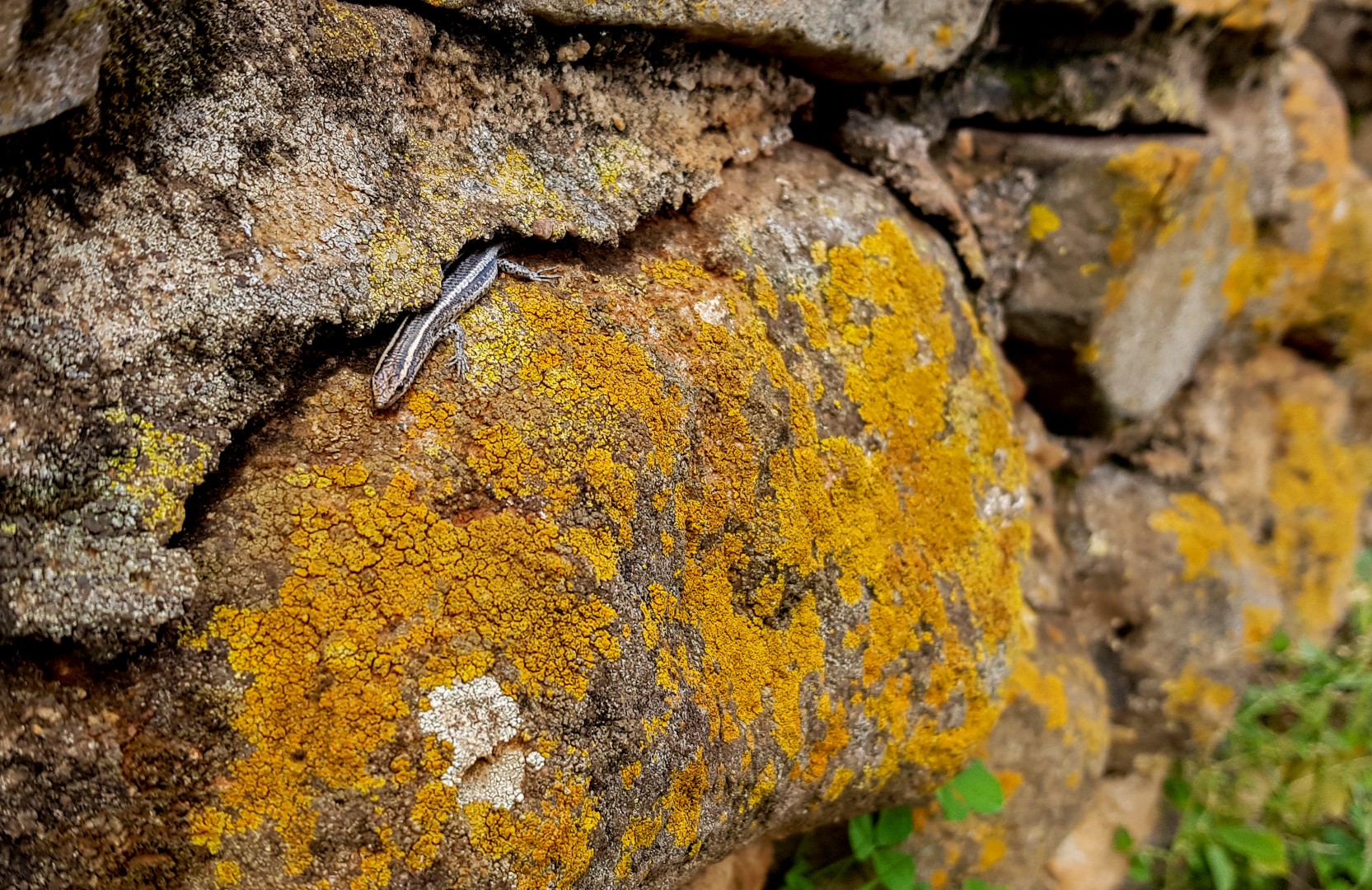 Fences old and new, all made the more interesting by the presence of tiny reptiles.

Skinks, however, are near the bottom of the food chain, and like all creatures down the list, they have many predators out to get them — including birds, snakes, cats, curious children and even spiders. They stay close to cover, are very wary, and dart off rapidly to nearby crevices at the slightest sign of approaching trouble. They can shimmy across vertical surfaces and their flattened bodies allow them to hide in narrow places. 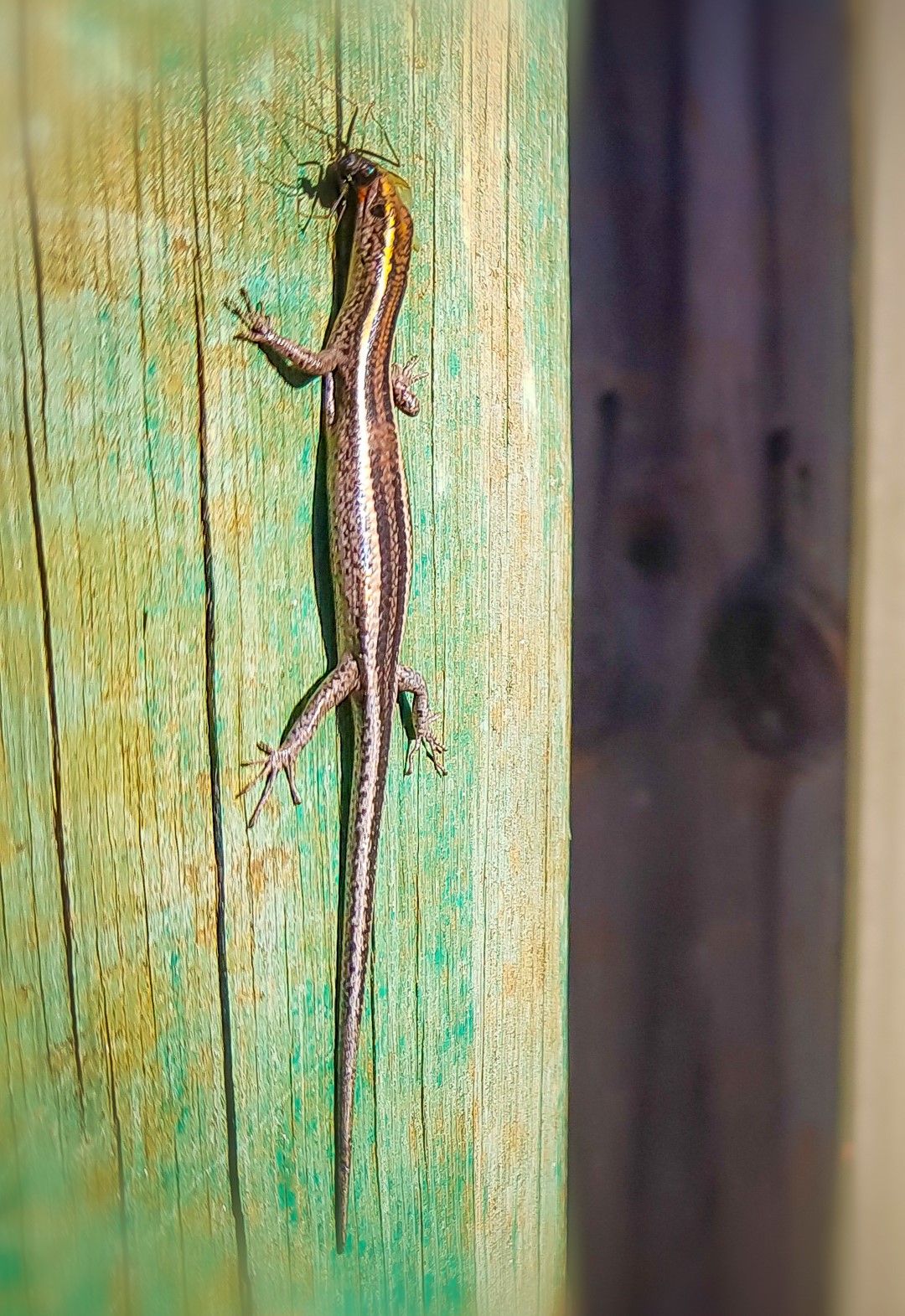 A passing ant is seized. Snake-eyed skinks have been recorded staking out ant trails to rob the insects of the prey they are carrying. 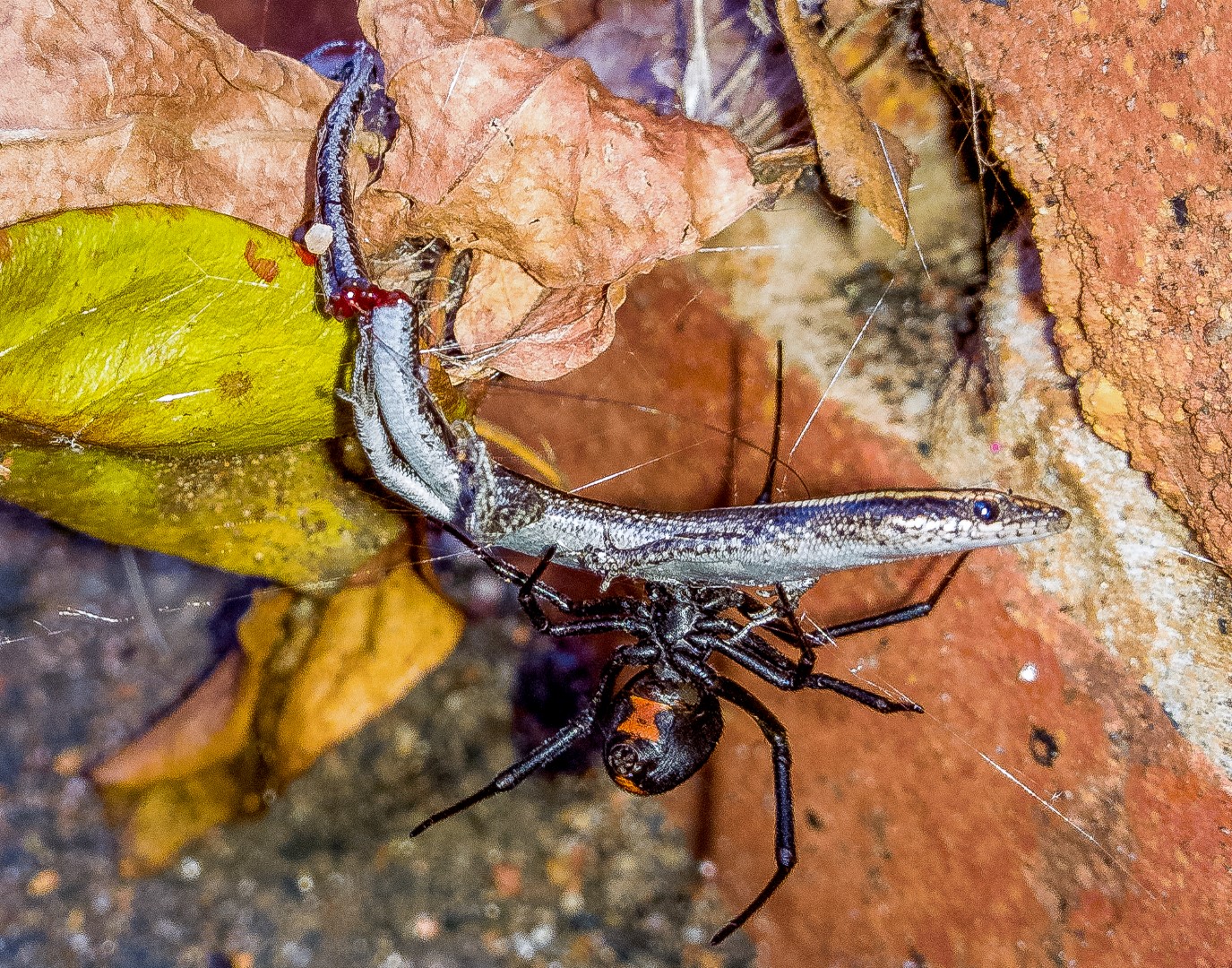 A Red-back Spider makes a meal of an Elegant Snake-eyed Skink on a footpath in the main street of Toowoomba. Note how the skink has cast off its tail in an attempt to escape the spider’s clutches.

Despite being a common species, a recent study published in the Australian Journal of Zoology is one of the first to provide a detailed look at the life-history of the Elegant Snake-eyed Skink.

Living for about three years, these skinks breed in spring and summer in southern Queensland and all year round in hotter northern places. Females lay two eggs, and there have been documented cases of communal nesting where up to four females lay eggs at the same time in one place. 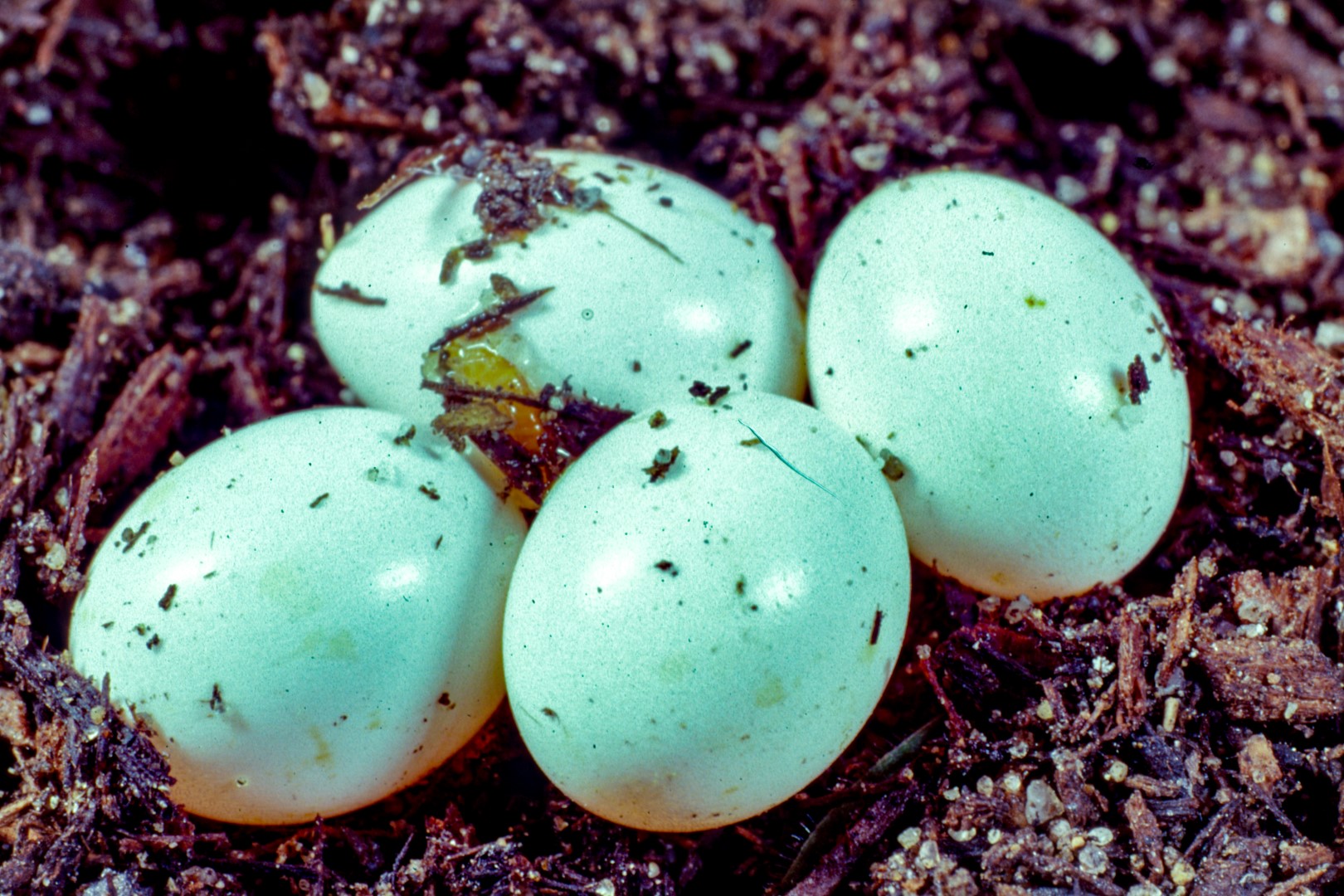 Snake-eyed skinks lay small eggs, probably similar in appearance to these of the Delicate Sun Skink. Although they are common in urban environments, very few egg clutches of snake-eyed skinks have ever been recorded. It is reported that some species lay eggs in communal sites, including the Striped Snake-eyed Skink (Cryptoblepharus virgatus), which uses ant plants (Rubiacceae) on Horn Island in the Torres Strait as communal nest sites. Up to 20 eggs and four hatchlings were recorded together at one site.

[Click on images in the gallery above for a closer view.]

I hope that that suburban fences may forever be adorned with the skittering shapes of miniature snake-eyed reptiles. The urban wilderness would be far more boring without them.